With fall coming, Hudson Park helpers still at it 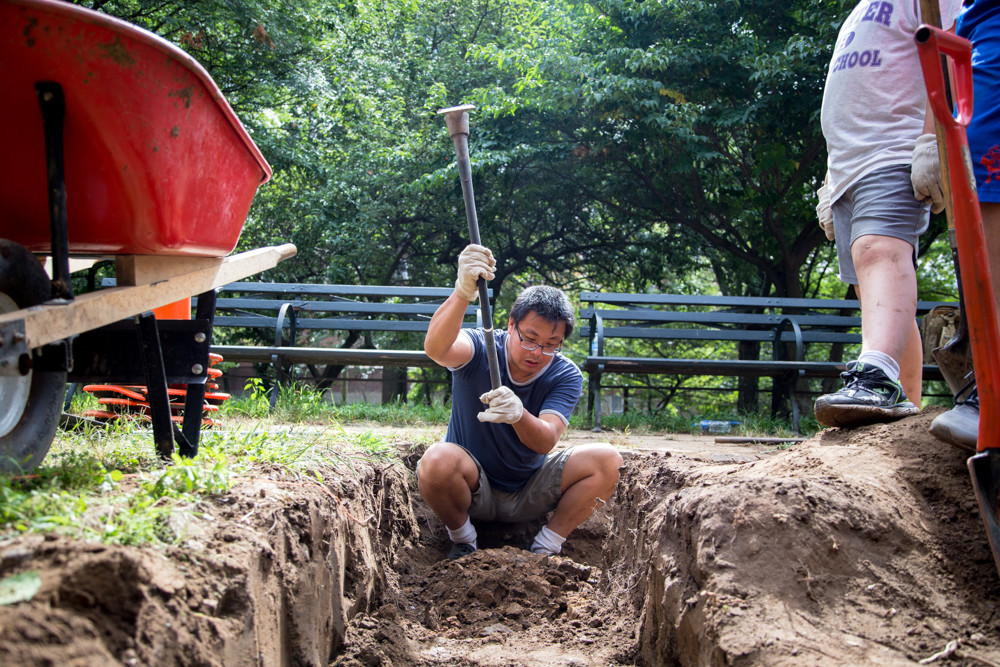 Xin Ye, a volunteer with the Stewards of Henry Hudson Park, uses a hoe to loosen soil in a plant bed at the park.
EIAN KANTOR / Photos 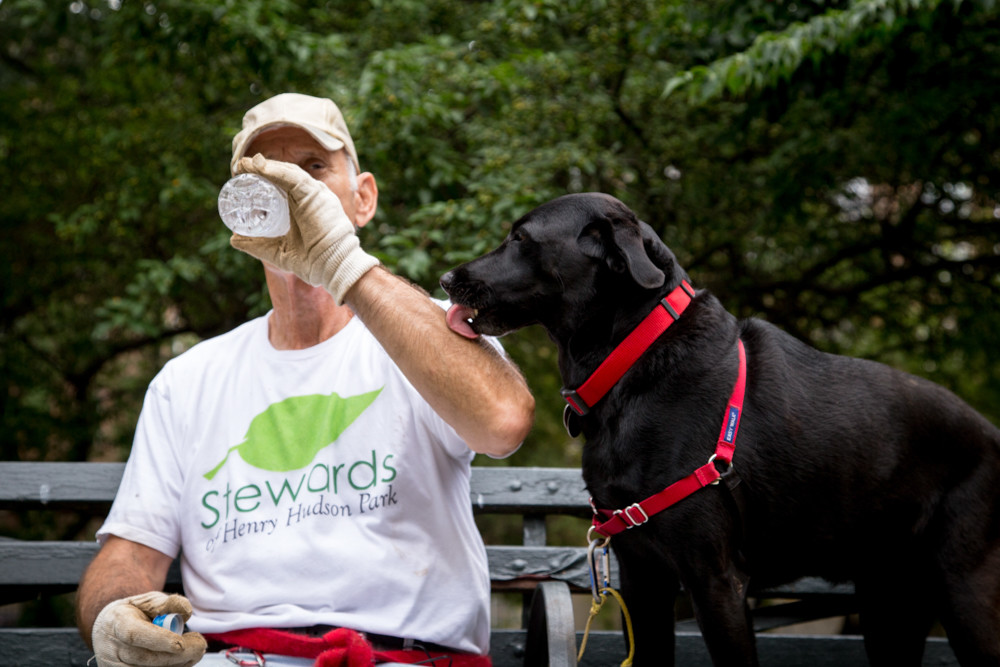 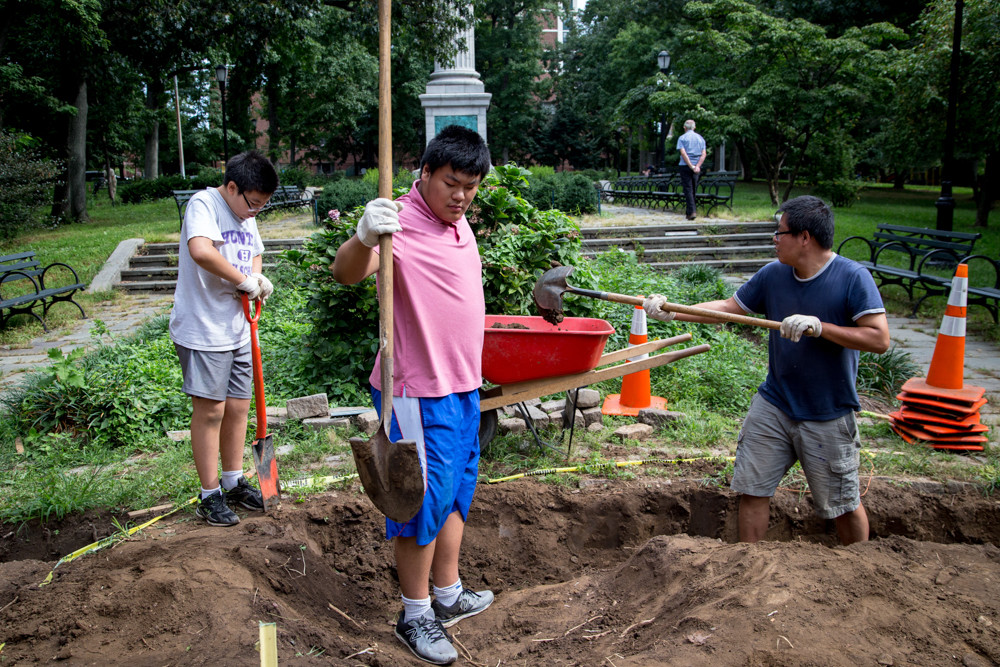 Xin Ye, right, and his two sons, Andrew and Brian, left, shovel soil in Henry Hudson Park. They volunteer their time with the Stewards of Henry Hudson Park, who work every year to revamp and revitalize the park.
EIAN KANTOR / Photos 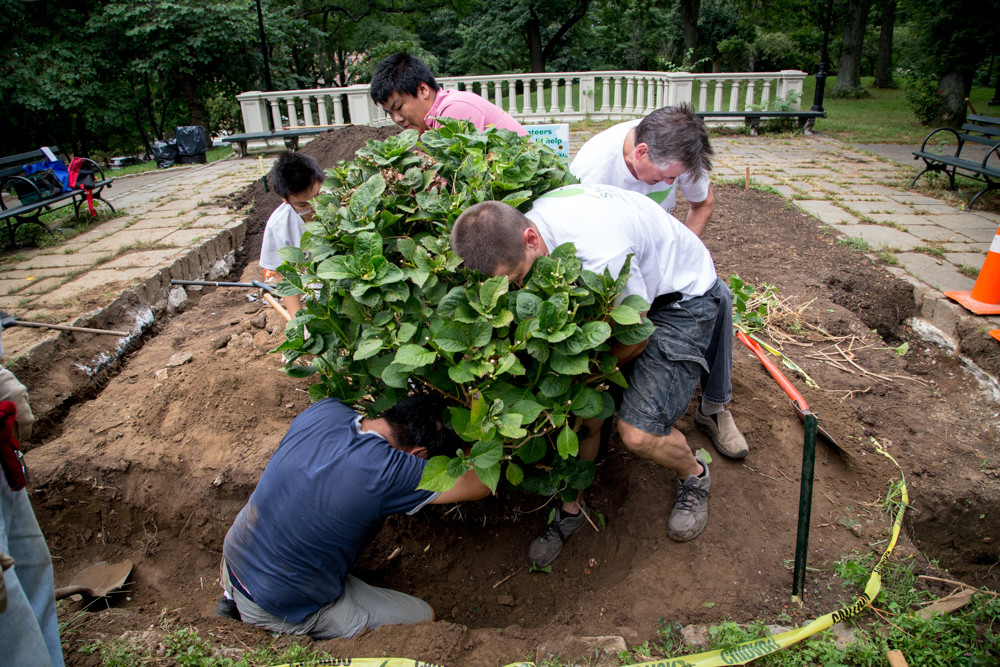 The Stewards of Henry Hudson Park collectively pull a shrub out of the ground in the park. The volunteer group works every year to revamp and revitalize Henry Hudson Park.
EIAN KANTOR / Photos 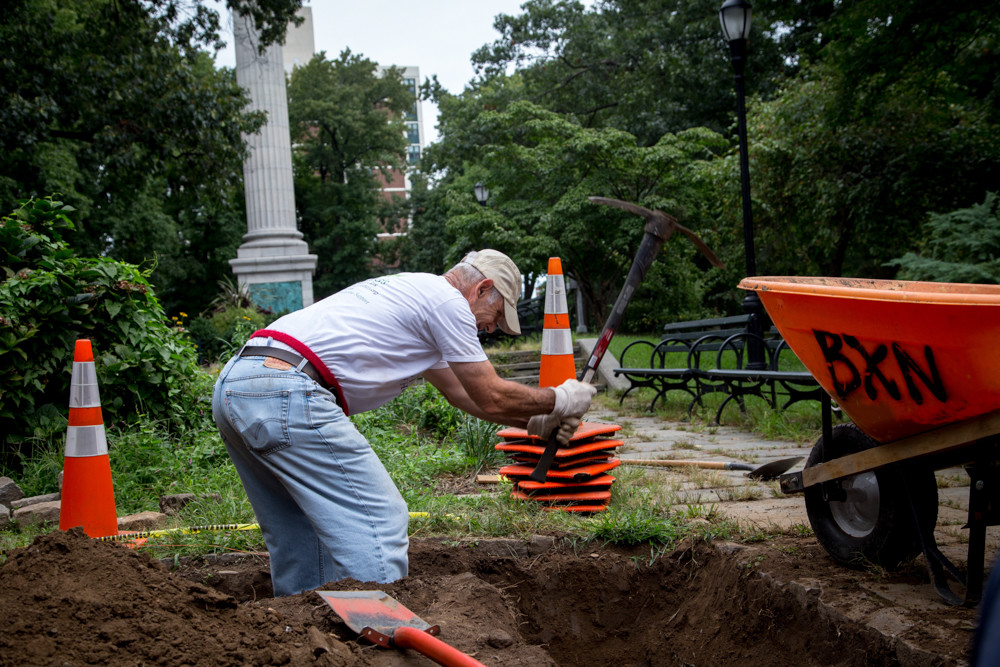 Mark Mason, a co-founder of the Stewards of Henry Hudson Park, works to clear a plant bed.
EIAN KANTOR / Photos 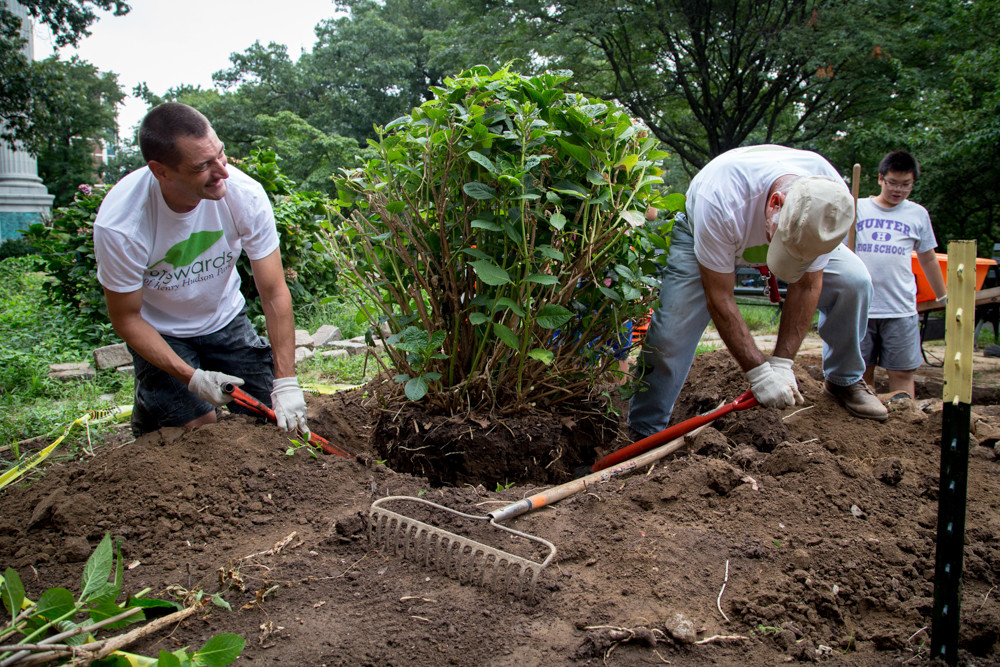 Stewards of Henry Hudson Park co-founders Daniel Reynolds and Mark Mason, right, work on safely removing a plant from the ground as part of an effort to revamp and revitalize the park.
EIAN KANTOR / Photos 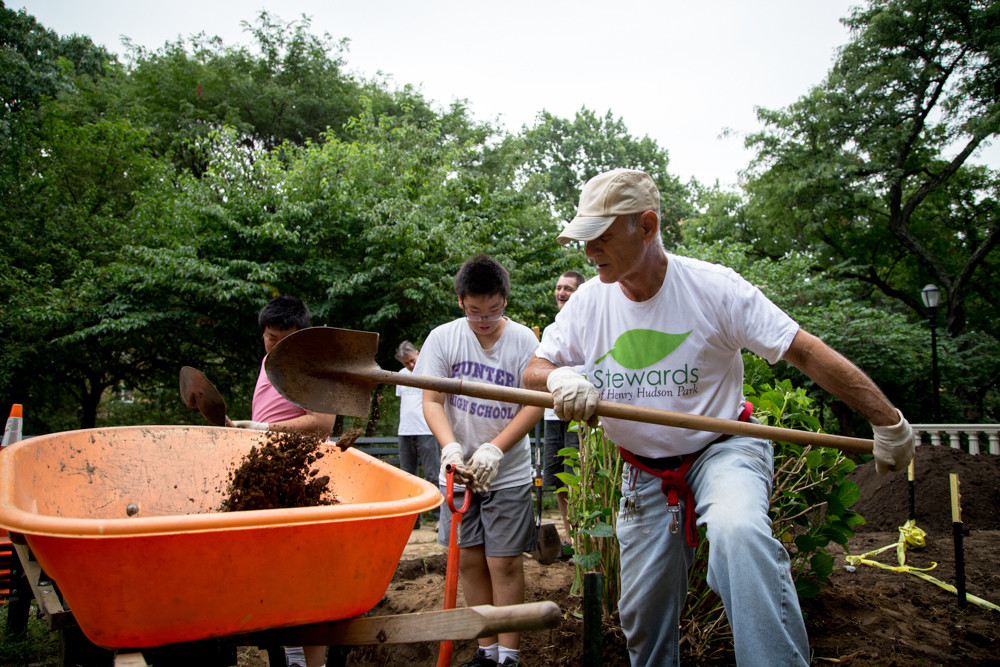 Mark Mason, a co-founder of the Stewards of Henry Hudson Park, drops soil in a wheelbarrow.
EIAN KANTOR / Photos
Previous Next
By SIMONE JOHNSON

When it comes to Henry Hudson Park, Daniel Reynolds and Mark Mason — along with their bounty of volunteers — are here to help.

Reynolds works as a regional manager for the city’s parks department during the week, but on the Saturdays, he and Mason lead the Stewards of Henry Hudson Park, getting down and dirty to keep the local park between Palisade and Independence avenues beautiful.

“We’ve seen more and more people come into the park and that’s something we’ve always wanted to do — increase the usage of the park,” Reynolds said. “We’ve seen a lot of park usage, and people having picnics in the park. And it’s satisfying to see.”

The stewards are a volunteer group Reynolds founded three years ago. Every Saturday, rain or shine, the crew works from 8 to noon, cleaning and improving the park through planting, mulching, drain cleaning, debris pick-up and anything green that helps promote environmental and community growth.

“We are constantly adding to the park,” Mason said, including what he’s calling the third phase of a four-phase project.

“It is an 18-by-21 planting bed in front of the Henry Hudson statue,” he said. “It will be a formal garden anchored by a large urn and pedestal.”

That project was funded by grants from the Partnership for Parks and the Citizens Committee for New York City. The parks department ties up loose ends by donating fresh soil as well, Mason added.

As a result, Mason said, the park has attracted dog enthusiasts, sunbathers, joggers and outdoor lovers alike. When working, volunteers focus on the garden along the perimeter of the park. Reynolds said, to bring more people into the space.

The stewards are currently immersed in a three-year project to reconstruct the four large formal garden landscape beds. However, residents aren’t the only ones toiling away in the park. Students from Bronx High School of Science, Riverdale/Kingsbridge Academy and New York University, as well as Boy Scouts and members of a military academy also have lent a hand in the fields of Henry Hudson.

Soon, Reynolds’ own daughter — an RKA student herself — will work the landscape as part of the community service requirement for the school.

The stewards is an organization for and fueled by the community. Not only does the volunteer group receive grant money, but the community also gives out of their own pockets.

“There are a lot of people who are not able to help us physically but help financially,” Reynolds said. “We’re always grateful for that, and neighbors are particularly happy with the development, and they see the need for the project just as much as we do.”

Part of what makes this volunteer group different is that some members don’t wait until Saturday morning to tend to the plants. Volunteers are passionate about the park, Reynolds said.

“I feel lucky that the park is nearby to where I live,” Mason said. “I use it twice a day to walk my dog and (stewards) mascot, Missy Mason. I feel lucky to have the opportunity to make it a better place for all to enjoy.”

The landscape is an important part of the project because aesthetics is part of what draws people in, Reynolds said.

In addition to their green creativity, Reynolds has incorporated outside events into the organization as well.

This past June, for example, the stewards hosted a city park puppet mobile —  a puppet show held outside — attracting more than 80 people.

Reynolds aims to have more programming in the park in the future, but planning interactive activities is only the beginning.

“In 2019, we would like to finish the last formal garden,” Mason said. “It will be a real victory as these plantings have been rigorous. I think that when we finish I will break out the lemonade in celebrations.

“But, I have a secret wish. I have dreamed of the day when we can mow our four-acre lawn with our own mower. Maybe that wish will come true in 2019.”