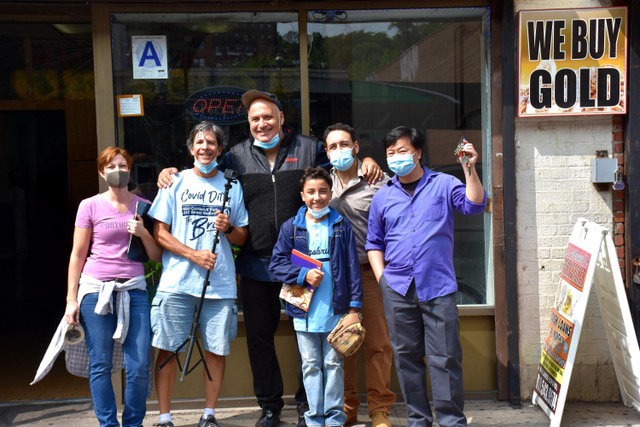 After months of being home and unemployed, Steve Greenstein was ready to get back to work — so be became his own online television production company. He put out a call for actors and started work on ‘COVID Ditty,’ based on his real-life experiences living in Kingsbridge through the coronavirus pandemic.
Courtesy of Steve Greenstein 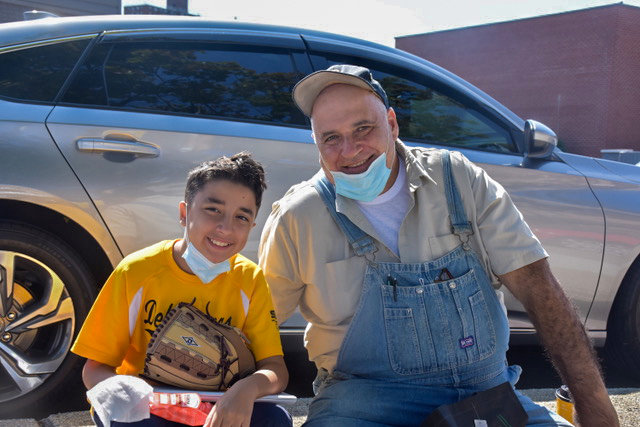 Steve Greenstein, bored after months of unemployment and looking to create opportunities for his fellow actors, dreamed up ‘COVID Ditty,’ a web series based on his own observations of life during the coronavirus pandemic. Greenstein plays Phil, a publics chool custodian working hard to take care of his young son Charlie, played by Andrew Terranova.
Courtesy of Steve Greenstein
Previous Next
By KIRSTYN BRENDLEN

Just weeks into the pandemic, unemployment ticked up. Workers were laid off or furloughed, and even those who still had jobs faced slashed hours and pay.

Steve Greenstein found himself among those sitting at home without a job. Even during those first weeks of March, the 40-year actor rode the 1 train to auditions, trying to find his next job. But abruptly, even those opportunities dried up as theaters closed, and film and television productions shut down.

Without work, Greenstein was stressed like most everyone else — and bored.

Greenstein was used to doing eight-show weeks in local theatre, or long hours on television sets of show like Netflix’s “Iron Fist” and FX’s “Pose,” and now he found himself with plenty of time and energy — but no project.

Still, Greenstein needed a way to process what he was experiencing as he wandered around his Kingsbridge home.

“It started really just by walking the neighborhood, just to go shopping, and, you know, seeing the juxtapositions of everything,” Greenstein said. “Here we were in lockdown, but McDonald’s was open. Holy smokes, you can get drunk till you drop, the giant liquor store was open at 238th.”

He also participated in an online course from the Screen Actors Guild about using technology as an actor, especially helpful as the coronavirus pandemic forced auditions online and streaming services continued to dominate the market.

His observations of the neighborhood along with what he learned in that class birthed a new project: “COVID Ditty,” an eight-episode online series about life during the pandemic, filmed in and around his neighborhood.

Kingsbridge, Greenstein said, is the “sixth man of the basketball team” of the series, serving as more of a character than a setting.

“I find this neighborhood to be fascinating because it’s so diverse,” he said. “And I noticed the vitality in our area, as opposed to the negativity I’m always hearing of Manhattanites. The other world of luxury buildings, and the Hamptons, and all this crap.”

As the pandemic wears on, stories crop up about people fleeing the city for greener pastures — first temporarily, then permanently for some as they buy houses and supposedly settle in the suburbs. And as negative stories about the New York City flooded in, Greenstein was particularly upset by coverage of the Bronx.

“I didn’t feel like that was the true narrative,” he said. “The media kept taking shots at the Bronx, showed rioting that happened on Fordham Road, and that was supposed to be the whole borough.

“I went up to Fordham to get some clothes, what a vibrant shopping district. Going down to Fordham Road, going to the university, seeing all these kids walking around, it’s a place to get excited about.”

Beyond bringing some love to the borough, Greenstein’s production was also an opportunity to create jobs for his fellow actors, who jumped at the chance to get back to work. Greenstein’s scripts are based on his real-life experiences during the pandemic, played out through characters he created. He plays Phil, a public school custodian trying to support his young son.

In the first episode, Phil wanders through his Kingsbridge neighborhood — simply trying like everyone else to live a somewhat normal life. From keeping his mask over his nose, to chatting with the owner of the local bodega, and even meeting up with a friend for a drink on a park bench — a staple of city social life through the economic shutdown.

Greenstein needed clearance with his actors union to shoot during the pandemic, which he says was not an easy feat. And before they shoot every episode, the cast and crew all head down to Imperial Pharmacy on Corlear Avenue for a COVID-19 test.

“We have our table read at Tibbett’s” Diner, he said. “We sit in the tents over there, we have our rehearsal socially distanced at a table, so the local businesses are making money when I buy lunch for everybody. Because the ancillary benefit from producing film and television is tremendous.”

The stories in the upcoming episodes are all inspired by real-life experiences. While they were filming an episode, Greenstein joked to a character that he’d just been “de Blasio’d” after they find the library unexpectedly closed.

“As I’m saying ‘de Blasio’d,’ some guy — a construction worker — we’re saying the line, he walks back and he goes ‘Eff de Blasio,’” Greenstein joked.

He thought up another episode, “Me and Mr. Lee,” after realizing Chinese restaurants in the area had been among the first to close as the pandemic swept in and news of racist attacks against Asian people increased along with coronavirus panic. He and his TV son, played by Andrew Terranova, work to raise money for the owner of a closed Chinese restaurant after they find out he’s struggling to pay rent.

“There is humor in my scripts,” Greenstein said. “I’m trying to bring some — not joy, to the situation, but it’s the human spirit that comes out. I mean, you have to have some laughter. This is not a documentary, we’ve seen all of that. We’ve seen the body bags coming out, we’ve read the articles.

“That’s not what this is about. This is about a blue-collar guy named Phil just trying to make it with his kid.”