Wolverines ‘pressing’ as they head to postseason 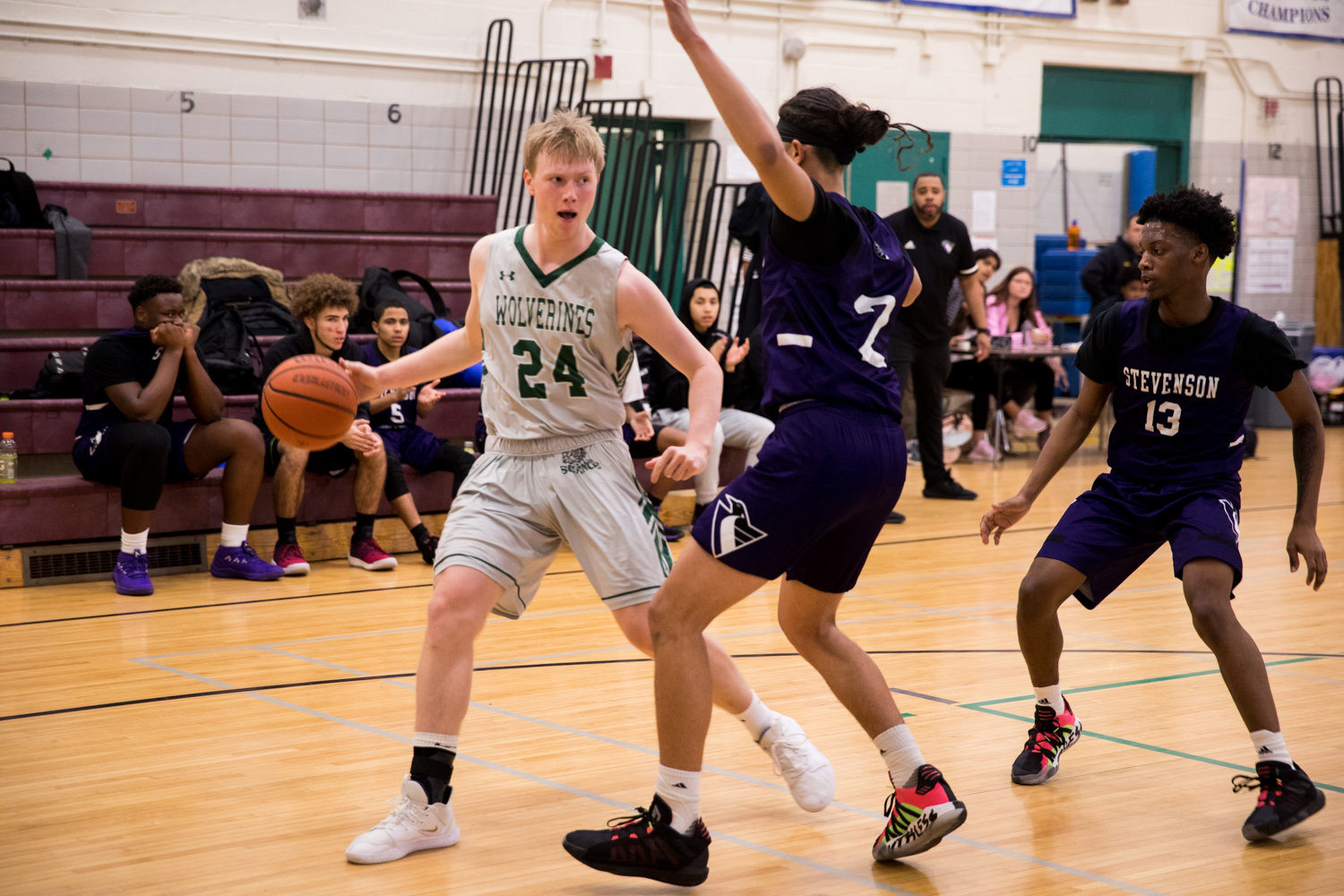 Bronx Science senior Kyle Catry turned in a team-high14-point performance against Stevenson, but it wasn’t enough to avoid a seven-point loss to the Ambassadors.
JULIUS CONSTANTINE MOTAL 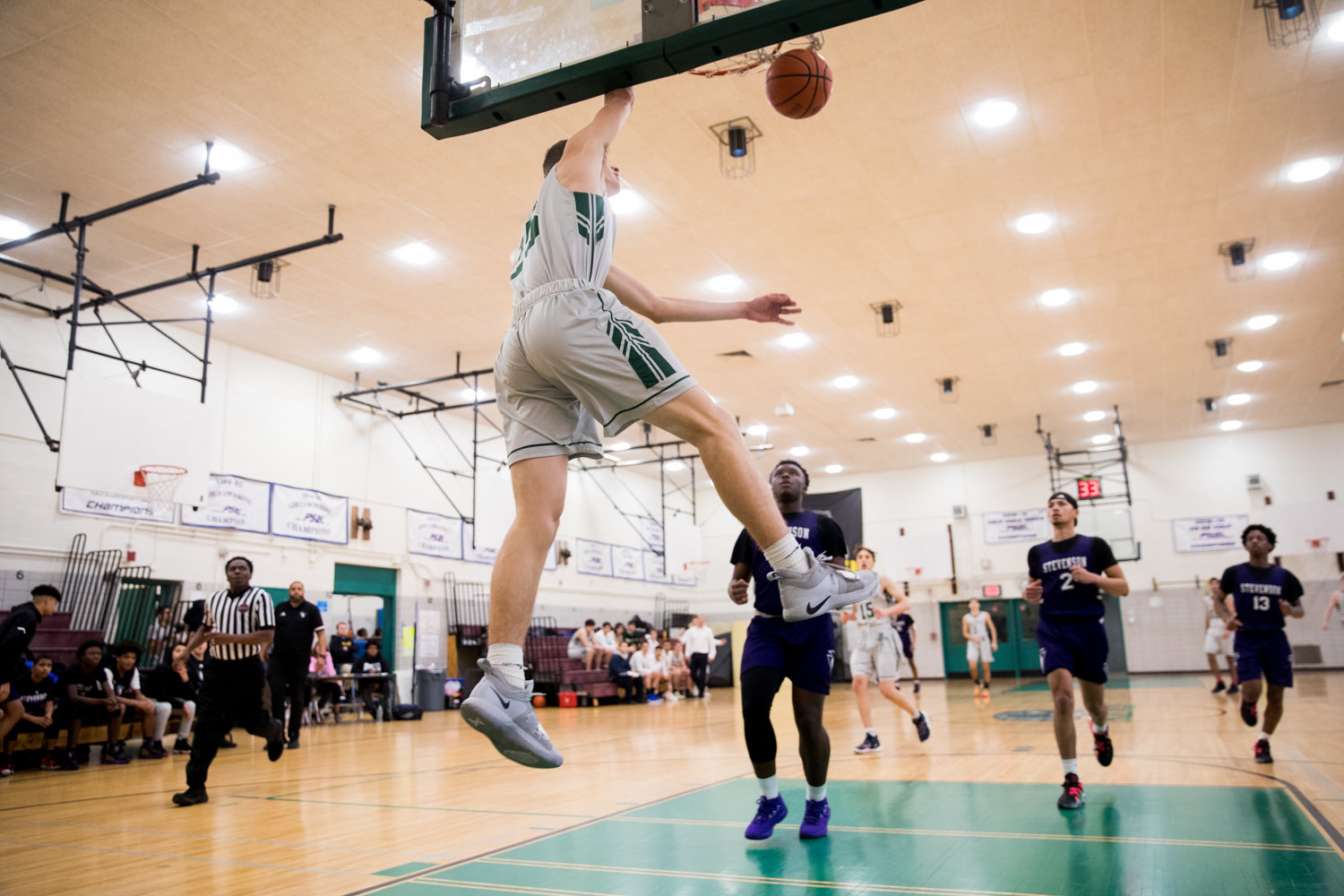 Bronx Science had long since wrapped up the Bronx A Northwest Division championship when the 2019-20 Public School Athletic League season entered its homestretch last week. So all that was left for the Wolverines to do was use its final two games against Stevenson and Lehman as tune-ups for the upcoming playoffs.

The Stevenson game would be the final home game of the season for Science, and it would provide a stiff test for the Wolverines as the Ambassadors came into the game toting a 13-1 mark and were the top dogs in the Bronx A East Division. Science’s final game would pit the Wolverines against a Lehman team that sat just a game behind Stevenson in the division, owning a 12-2 record.

A challenging finish to the regular season? You bet.

Things started off brilliantly for Science against Stevenson when the Wolverines jumped out to a 17-point lead midway through the third quarter. But that’s when everything fell apart for Bronx Science as a series of turnovers and missed shots created by Stevenson’s swarming defense saw the Ambassadors erase their substantial deficit and use a 40-16 spurt the rest of the way to pull off a stunning 62-55 victory over Science.

Things got no better the next day versus Lehman as Science fell 88-42 to the Lions.

“We had control of the game, and then Stevenson just picked up the pressure and we didn’t handle it,” Science head coach Bart Allen said. “I said to the team, ‘If we want to be one of the top teams, you have to be able to handle the pressure.’”

Science looked to be marching to a comfortable victory when a bucket by Nate Denham gave the Wolverines their largest lead of the day at 39-22. It was almost looking too easy for Science as Stevenson was considered one of the top programs in the Bronx.

“I wasn’t really sure how we were going to stack up against them because they are good and they’ve blown out a lot of teams,” Allen said.

“A lot of the other coaches I spoke with said they are one of the top teams out there.”

And the Ambassadors soon began to live up to that reputation. They immediately embarked on an 11-0 run capped by a layup by O Zhell Jackson to pull within 39-33. Then after back-to-back baskets by Kyle Catry bumped the Wolverines’ lead back to 10 points, Stevenson closed the quarter on an 8-2 run to shave Science’s lead to 45-41 entering the final period.

Stevenson took the lead for good at 53-51 on another Jackson layup with 3:21 to play, and seven free throws down the stretch by Rashawn Clemente helped seal the deal for the Ambassadors.

Allen said he refrained from calling any timeouts during Science’s meltdown for a very specific reason.

“I wanted to see what they were going to do,” Allen said. “If it was the playoffs, I would have called a timeout and I would have taken more control. But in this situation, I wanted to see how they would handle it. Someone out there had to figure it out.”

Catry, who led Science with 14 points, described the loss as a learning experience the Wolverines can use in the postseason.

“I think we got into a stretch where we couldn’t get the ball up the court, and we just have to know we have to calm down and slow down,” Catry said. “We just need to adjust and process quicker. Obviously you want to come out of every game with a ‘W,’ but just having this competition and seeing things like today — where we weren’t quick enough to change when we saw something was wrong — will help us down the road.”

The focus on handling a pressing defense will be a point of emphasis at all practices now as the Wolverines prepare for the playoffs, Allen said, and a hoped-for spot in the borough championships. The teams for that postseason tournament will be released Feb. 7. The PSAL’s citywide playoffs commence the week of Feb. 24.

“I’d love for us to play in the boroughs,” Allen said. “We’ve never been in it since I’ve been here. I’m hoping our record  (12-5) will be good enough to get us in. But in the meantime, we have things to work on. We didn’t react well enough (against Stevenson). I think what happens with us sometimes when we get a lot of pressure is the guys sometimes don’t know how to react and they aren’t doing what they need to do. We need to fix that.”