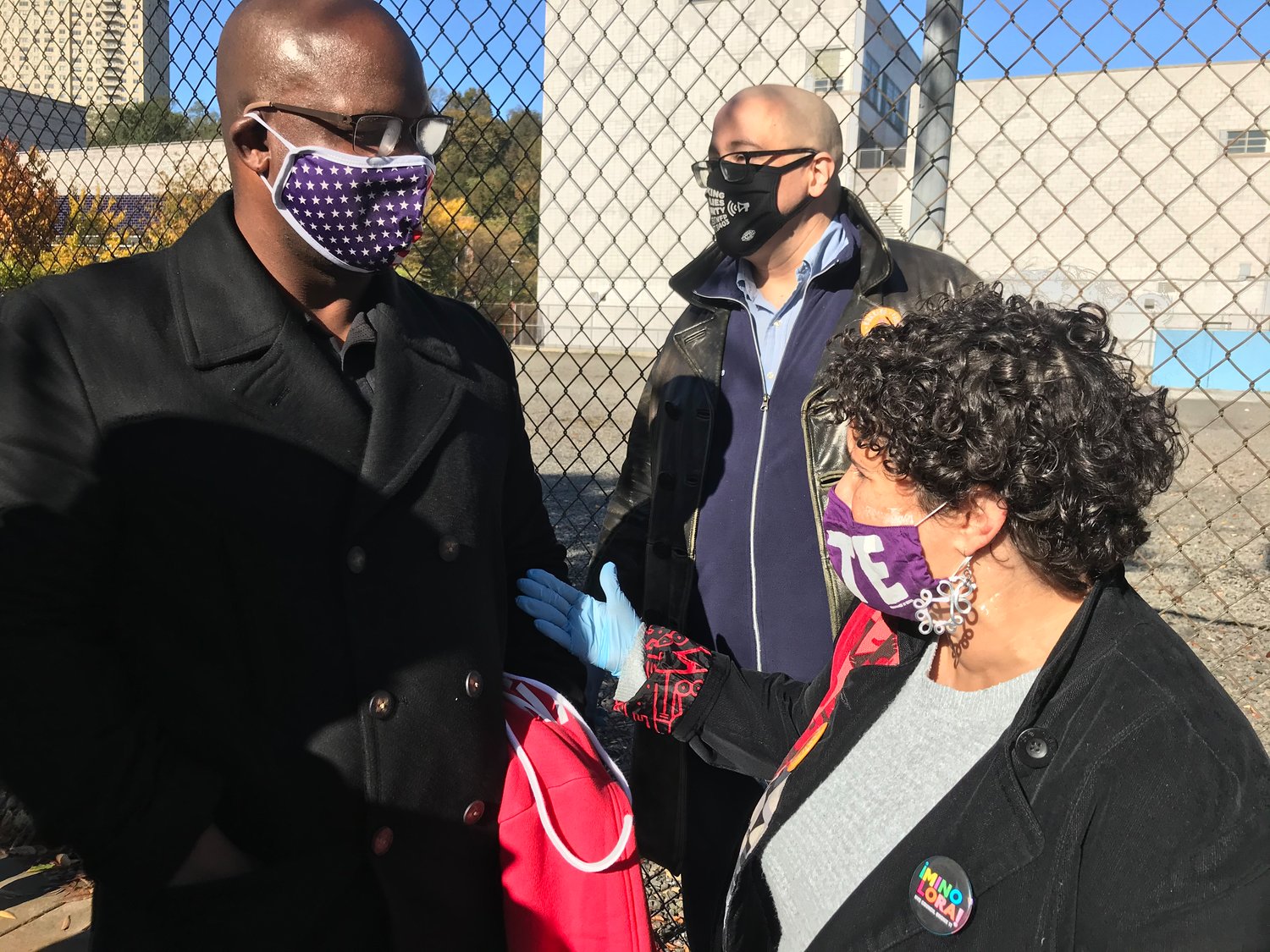 Congressional Democratic nominee Jamaal Bowman shares some words with city council candidate Mino Lora during a Working Families Party rally outside of IN-Tech Academy. The two, along with state Sen. Gustavo Rivera in the background, are fighting to ensure Working Families can remain on future ballots.
MICHAEL HINMAN
By MICHAEL HINMAN

State Sen. Robert Jackson stays pretty busy representing his Manhattan constituents, meaning he doesn't make it up to the Bronx very often. But when he was asked to visit IN-Tech Academy Saturday morning, just blocks from the Marble Hill community he represented, Jackson knew he had to be there.

"When you talk about the election, and you look at the ballot, you see eight different parties on the ballot," Jackson said. "You see we've got Democrat, Republican, Conservative, Working Families Party, Green Party, and the bottom line is that the WFP must stand strong."

Getting on the ballot as one of New York's eight recognized political parties took a lot of work for the Working Families Party back in 1998.  Staying there after the 2020 election, however, is a lot harder, thanks reportedly to the party's clash with Gov. Andrew Cuomo in the 2018 gubernatorial election. And it's because of that Jackson and other elected officials backed by Working Families rallied outside of IN-Tech, which has doubled this past week as an early voting site.

New York operates under a fusion voting system — all the votes collected from various parties for a single candidate are pooled together for that single candidate. So if Cuomo, for example, was not only the Democratic Party's nominee, but also the Working Families Party nominee — all votes from both party columns would count toward Cuomo's overall total.

In the past, a third party like Working Families only needed to convince 50,000 voters — or 2 percent of all voters  — to make their selection using Working Families' party's column.

Even more, it wasn't just the gubernatorial race that was being counted anymore. Now each of the smaller parties needed at least 130,000 ballots cast in the presidential race, too.

Since Working Families backed the ticket led by former vice president Joe Biden and California Sen. Kamala Harris, the party is working to convince would-be voters to cast their Biden votes on the Working Families line, and not the Democratic one.

But it's possible many voters may not even realize they could vote for major candidates like Joe Biden and Donald Trump through the minor parties. And if they do, some may fear it could "split" the vote if a single candidate didn't collect all of his or her votes from a single party.

Some of that confusion comes from a poor investment by government and other leaders in educating voters on civics at this level, said state Sen. Alessandra Biaggi, who credits her toppling of former Sen. Jeffrey Klein in 2018 primarily on the sweat and labor of Working Families.

"The fact that people don't understand makes sense to me," Biaggi told The Riverdale Press. "But then it's our responsibility to educate. That's our job. And that's why we're here, to educate and to continue to spread awareness."

"There are immense benefits to having the party around," Rivera told The Press. "The WFP has been at the core, consistently moving, tugging, pushing, nudging the Democratic Party as a whole, and the Democratic politicians in particular, to make sure they take positions that are more aligned with what working class people need all across the state."

When Rivera was first elected to the state senate in 2011, the Occupy Wall Street movement was dominating headlines fighting what members called income inequality — especially compared to the millions of dollars made by corporate America and the large banks. Working Families, Rivera said, was right in the middle of it all.

Included on that list, Rivera said, is Cuomo himself. The governor has proclaimed himself the "most progressive," Rivera added, but he's far from it.

Last September, Cuomo asked Washington for $59 billion in relief in the wake of the coronavirus pandemic, saying there's no tax the state could institute that would generate that kind of cash New York needs. The New York Times has reported in the past that the top 2 percent of the state's highest earners already contribute half of the state's income taxes.

One of Saturday's attendees who is looking beyond the state to implement Working Families policies is Jamaal Bowman, who's expected to succeed U.S. Rep. Eliot Engel in Congress. He believes with the backing of other progressives, this part of New York could heavily influence the kind of change Working Families is looking for throughout the rest of the country.

"There are too many people who have lost faith in our political system, and rightly so because they've been neglected, marginalized and oppressed and forgotten about," Bowman said. "This is a democracy. Democracy cannot work if we have this level of economic inequality. So we've got a lot of work to do."