Yang looks to give everyone a seat at the table 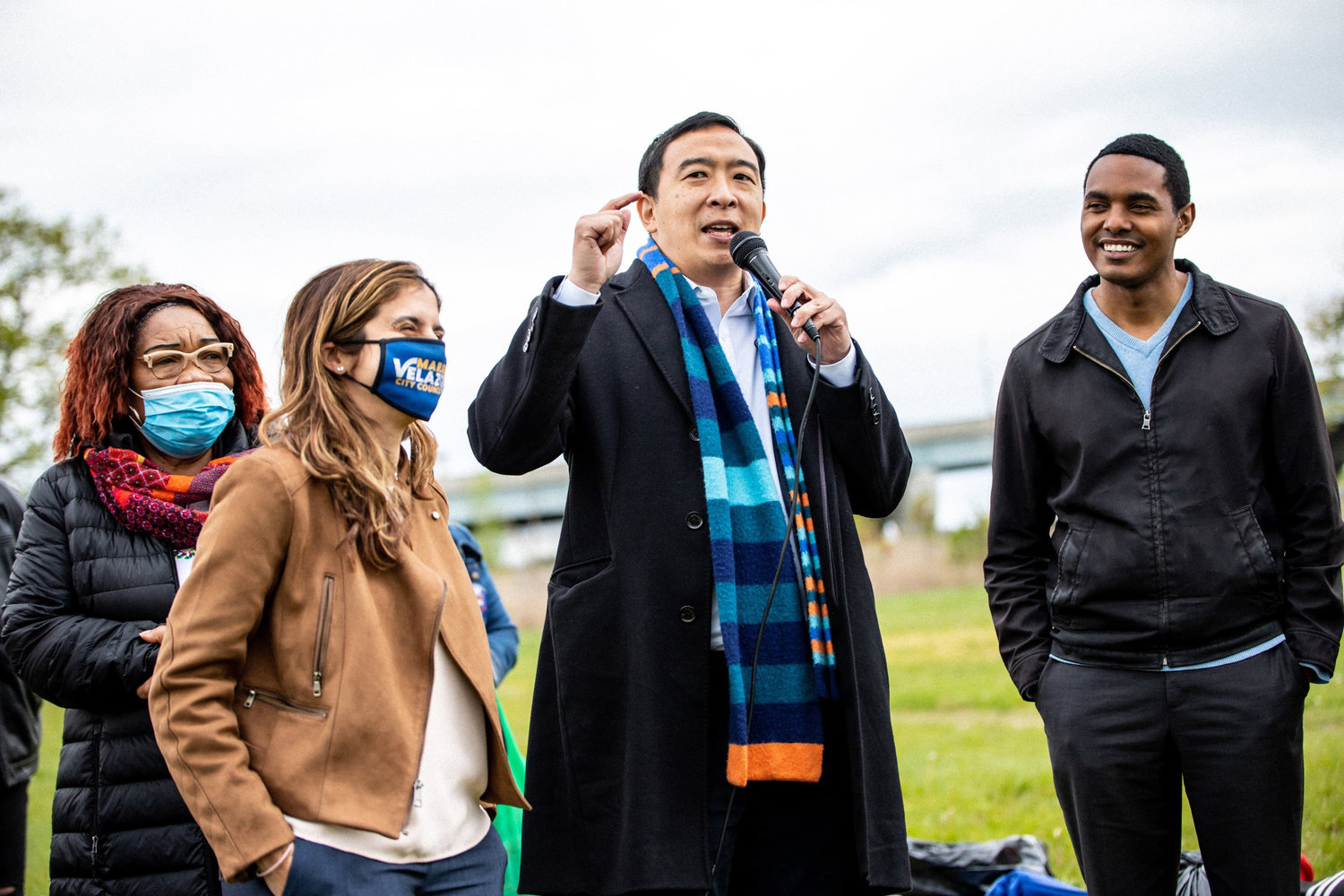 With city council candidate Marjorie Velazquez and U.S. Rep. Ritchie Torres by his side, Andrew Yang makes yet another stop in the Bronx as part of his push to become New York City’s next mayor.
Courtesy of Andrew Yang for Mayor 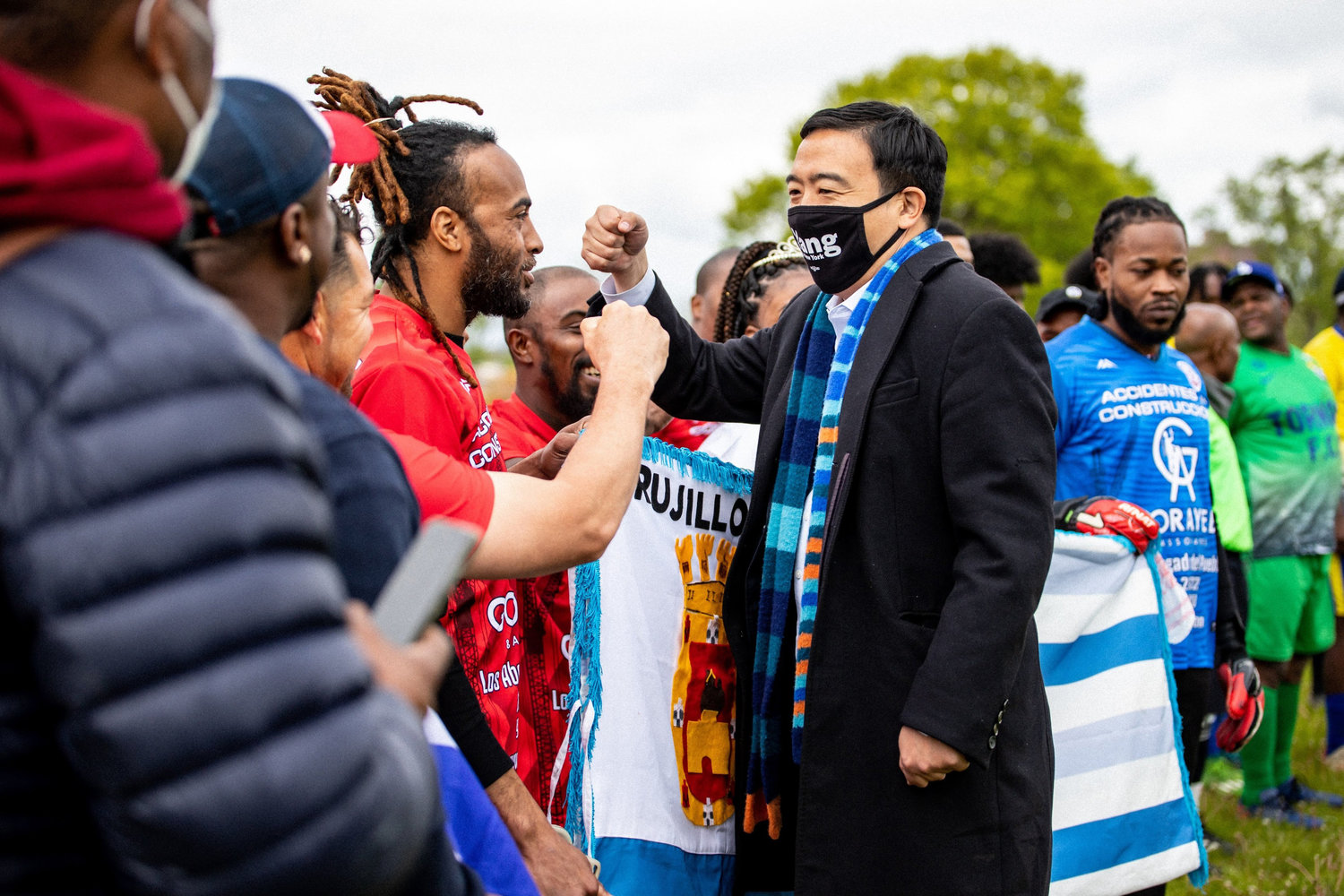 To describe running for New York City mayor as herculean is an understatement. But as Andrew Yang and others discovered along the way over the past several months, the coronavirus pandemic hasn’t made it any easier. Yet, it’s that very pandemic Yang fears will cause many in the city to struggle without the right leadership at Gracie Mansion.
Courtesy of Andrew Yang for Mayor
Previous Next
ANDREW YANG

Robert Moses envisioned it as six lanes of concrete, stretching nearly seven miles across the Bronx. When it came to the Cross Bronx Expressway, money was no object. In fact, a small portion of it is considered one of the most expensive highway stretches of all time, costing nearly $400 million in today’s currency.

Since its opening, the highway has been blamed for keeping poor neighborhoods poor, and for making it even harder to breathe in the Bronx. The expressway certainly has its uses — when it’s not clogged up — getting traffic between two bridges: the Alexander Hamilton and the George Washington.

Yet one community activist, Nilka Martell, has an idea she says could fix all those problems at once. Simply “cap” the expressway — well, at least a couple miles of it — and reclaimed those caps as much-needed park land.

It’s a bold idea. And an expensive one. But last week she picked up some high-powered support from the borough’s newest congressman, Ritchie Torres, and another man hoping to move his family from Queens to Gracie Mansion: Andrew Yang.

“Right now, that highway, unfortunately, divides the Bronx and makes it so that certain neighborhoods that are really quite close to each other typically feel quite separated,” Yang says, just hours after publicly backing the Cross Bronx proposal. “It’s things like this that gets me really excited, and it gets the people of New York excited. And it becomes where we focus.”

Yang became a household name in 2019 as he was one of several candidates seeking the Democratic nomination to challenge Donald Trump for the White House. He was different from most of the other candidates. He had no government experience. But he had a rather unique idea: universal basic income.

Essentially, Yang wanted the government to send every American 18 and older $1,000. Every month. Forever. It was a way to create financial stability for every family, he said, while encouraging them to not have to kill themselves working every hour they could just to make ends meet.

His “freedom dividend” attracted a lot of media attention, but not a lot of votes. Yang dropped out of the presidential race immediately after the New Hampshire primary, and instead threw his support behind Joe Biden.

By the end of 2020, with the pandemic raging, Yang joined at least a dozen other serious candidates and filed all of his paperwork to run for mayor.

“If you’re running a nationwide campaign, you’re not going to be talking about something that’s going to affect a community” in the way that capping the Cross Bronx could help the communities it cuts through, he says. “The issues are different and more localized. But in that way, they’re more compelling and real for it. Because if you imagine the impact on a family, for example — making the streets or subways safer — there’s nothing more impactful than that.”

It requires leaders willing to listen, Yang says. And listening is not exactly many of their strong suits. Especially if the voices trying to be heard are coming from outer boroughs like the Bronx.

“We need a government that is laser-focused on making things better for us and our families,” he says. “That they don’t just take office to take office. Like the reason I’m running for mayor is to improve the lives of the people who have been forgotten and left behind.”

When it comes to transportation — especially in the outer boroughs — far too many people feel left behind. Sure, Moses built a number of highways to help people get around. But most people in the Bronx don’t own a car, and they instead depend on mass transit like buses and subways. Except, using one of those services to get across the borough is quite impractical.

Yang’s solution here is simple: Reclaim control of the Metropolitan Transportation Authority from the state. As a city-managed line, create a system that can get people to where they actually want to go, not just anywhere they want to go as long as it’s in Manhattan.

“It’s why we’re getting frustrated, particularly if you’re in the Bronx and you look up and say, ‘Why can’t I get from one part of the Bronx to another part of the Bronx,’” Yang says. “Right now, there’s no responsiveness or accountability on the part of the MTA, because New York City gets only four out of 21 board appointments. We have to give people better ways to get around. For sure.”

Yang walked some of the streets of Riverdale just a couple weeks ago, and seeing empty storefronts — just like he’s seeing across the rest of the city — really concerned him. Many want to blame online companies like Amazon — and they certainly are a factor. But many times businesses shut down not because of invisible competitors, but instead from unyielding landlords.

“Empty storefronts are bad for neighborhoods,” Yang says. “So, with a closed storefront, if you have a landlord who looks at it and says, ‘I’m going to sit on this and wait for a deal I love,’ that darkened storefront sends a negative message to people in the community, and adjacent businesses.”

Instead, the city should reward landlords who do the right thing with some kind of incentive, or punishing those doing the wrong thing by levying a vacancy tax against them. Either way, Yang believes it could fill many storefronts and keep the business corridors of many neighborhoods vibrant.

Latest polling doesn’t have Yang at the top of the Democratic heap for mayor as he’d like. But there’s still a long way to go between now and Tuesday, when the primary finally wraps up. In the meantime, he’s going to continue traveling around the city, and continue to listen.

“This, to me, is really the purpose of my campaign,” Yang said. “It’s for us to turn the page and make it so that people in the Bronx, in Queens, and in other parts of the city actually feel like it’s our government, and that they have a seat at the table.”