Yes, women do work here, too 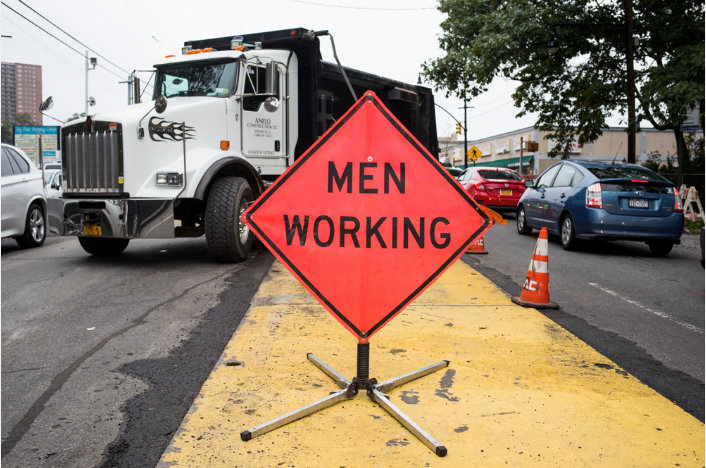 These kinds of signs could be in New York's past, if state Sen. Alessandra Biaggi gets her way.
JULIUS CONSTANTINE MOTAL / File
By MICHAEL HINMAN

The signs are likely as old as parkways themselves — and for state Sen. Alessandra Biaggi, that’s all the more reason why it’s time to change.

Biaggi has penned a letter to transportation department officials at the state, city and even borough level, asking they consider finally retiring the “men working” sign.

“As women continue to work as hard as ever to establish themselves in male-dominated fields, it is this nuanced signaling that can inhibit growth and inclusion in the work place,” Biaggi said. “Verbiage on a construction sign might seem like a small detail, but it speaks to a larger sense of how we view these industries, and those who are welcomed there.”

But it’s not just women Biaggi is thinking about.

“Gender-specific signs also perform as a means to further marginalize those who identify as non-binary and gender non-conforming,” the senator said. “We would like to ask that the Department of Transportation phase out the usage of ‘men working’ signs, and implement gender-neutral signs such as ‘people working.’”

Mino Lora is the latest candidate in an ever-growing race to succeed Andrew Cohen on the city council. And while Lora could create a lot of firsts for the district if elected next spring, one supporter included one first too many.

“Since 2016, activists like you have turned out like never before to hold elected accountable in every election,” wrote Andrew Mutnick and Becca Lish, in an email to fellow “activist friends.”

“We cannot let this one slip by. That’s why we are thrilled to support Mino Lora. By electing Mino, District 11 can send our first woman, first person of color, and first Latina to city hall to represent, reimagine and rebuild a better Bronx.”

Just one problem — District 11 has been represented by a woman in the past. And many say June Eisland was one of the most powerful city council members of her time.

After a Riverdale Press reporter pointed out the factual stumble, Lish quickly sent out a second note to her list apologizing to Eisland, who was first elected in 1979, and served until 2001.

“Oy,” Lish wrote, “a 22-year record of service is remarkable, and I wholeheartedly regret my error.”

But there was a silver lining, Lish wrote, just as Rosh Hashana — the Jewish new year — began. “I have the opportunity to add this to the list as I atone over the High Holidays.”

Cohen has indicated he’ll resign at the end of the year after earning a Democratic nomination to the Bronx supreme court. A special election is expected in March.