Yonkers mayor says Bowman should be arrested over House vote 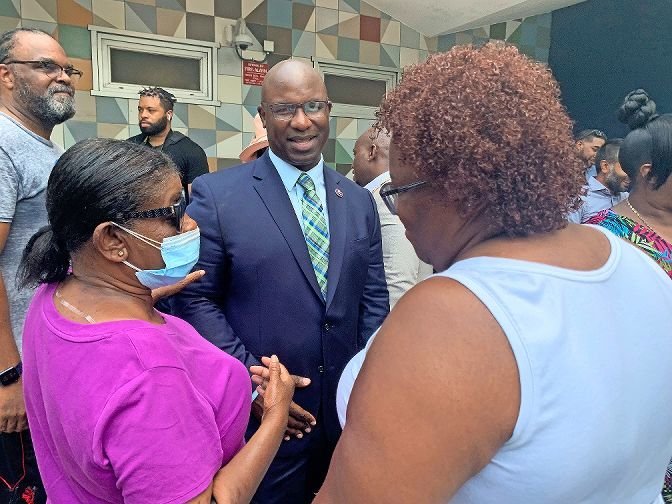 In just a few weeks, U.S. Rep. Jamaal Bowman's congressional district is going to shift out of the Bronx, for the most part. And apparently one neighbor to the north — the mayor of Yonkers, in fact — isn't happy about that fact.

A number of political groups — including the Working Families Party and The Jewish Vote — called out Mike Spano on Friday, after he reportedly suggested Bowman be arrested over how he votes in Congress.

"They should have arrested him for his 'no' vote on infrastructure," Spano told Phil Reisman and Matt Richter on Westchester County radio station WVOX-1460 AM on Friday, according to the Yonkers Times. "I'm a hardcore moderate in the middle, and that is where most of us are and end up. But the Democratic Party over the past two years has been pushed to the left, and the reforms — like bail reform — have gone too far."

Bowman has not responded to a request for comment from The Riverdale Press late Friday.

Spano, however, released a statement to The Press, saying "while being interviewed by a reporter who mentioned Jamaal Bowman's recent arrest during a protest, I expressed my disappointment with his 'no' vote on the infrastructure bill, which ultimately hurts working families across the state — an issue that can't be ignored."

But the Working Families Party demanded Spano apologize to Bowman, calling his comments "dangerous and racist."

"This is sadly a threat that too many Black New Yorkers have heard before," the group shared in a statement on social media. "Rep. Bowman has fought tooth-and-nail for our communities in Congress, and it's entirely unacceptable for Mayor Spano to threaten his safety and livelihood."

The Jewish Vote — from Jews for Racial and Economic Justice — also condemned Spano's comments, saying "we're all used to Republicans going full anti-democracy. But Mike Spano has decided to demonstrate that Democrats can do it, too."

Spano told the radio program he's considering challenging Bowman in the upcoming Democratic primary for his congressional seat. However, he also said he still has two years left in his current term as mayor, and he plans to serve it. Instead, he put his backing on an already-announced primary challenger, Westchester public works commissioner Tom Meier.

Torres found himself in the news in recent weeks after appearing on HBO's "Real Time with Bill Maher," where former Wall Street Journal and New York Times reporter Bari Weiss created controversy over her declarations that public health measures surrounding the coronavirus pandemic should end.

Bowman was arrested last month outside the U.S. Capitol, when he joined protesters condemning the U.S. Senate in its failure to pass voter reform. Bowman was later released, and said he would pay a fine for crossing a police line.