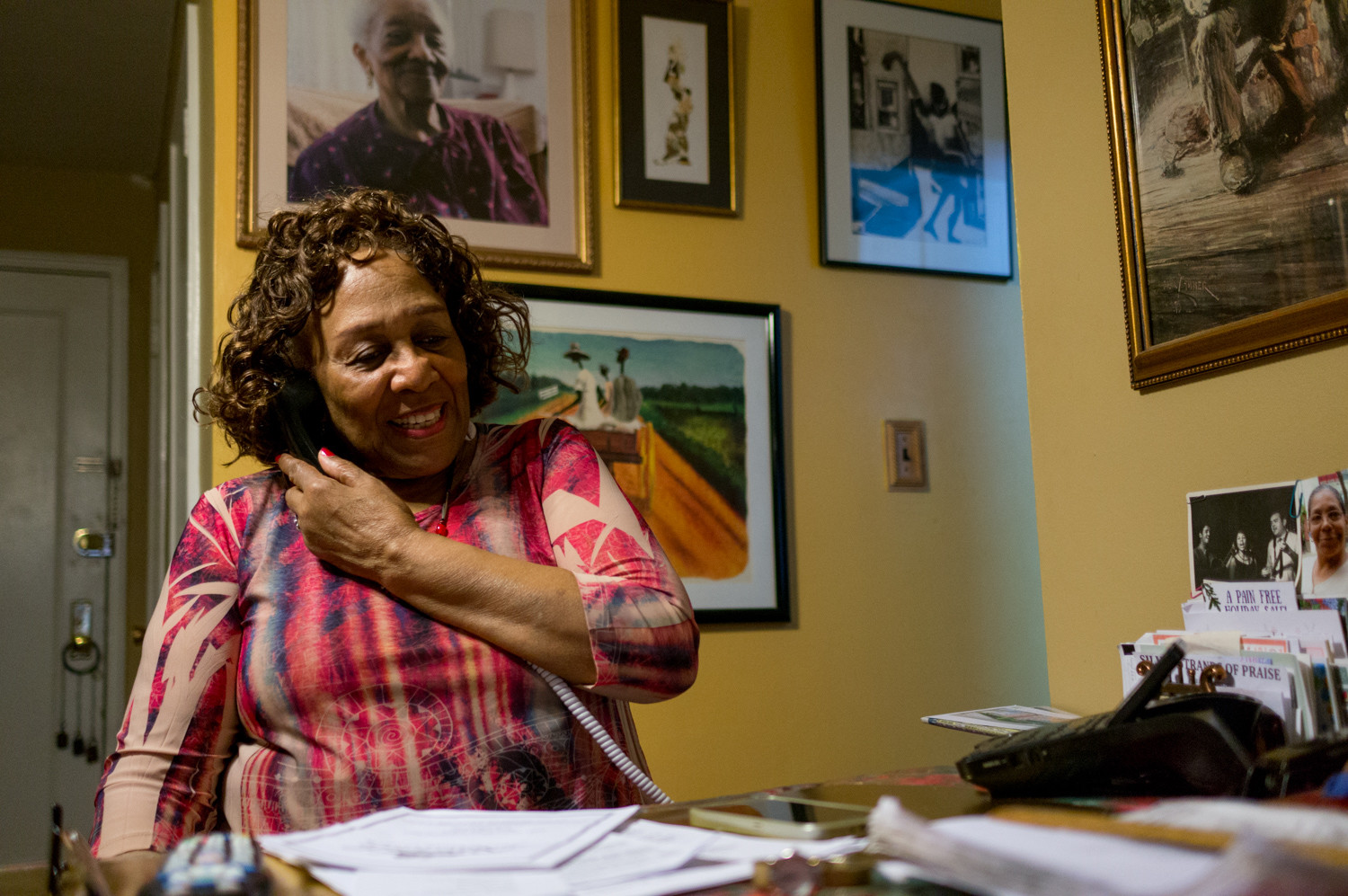 Delores Dixon takes a phone call in her home. A folk singer who practices tai chi and line dancing — and has been a Riverdale resident for the last 41 years — Dixon deals with ‘what some would call ‘vertigo,’’ she said, a condition of frequent dizziness and headaches, and hopes the New York Health Act won't make the health care process more confusing.
JULIUS CONSTANTINE MOTAL 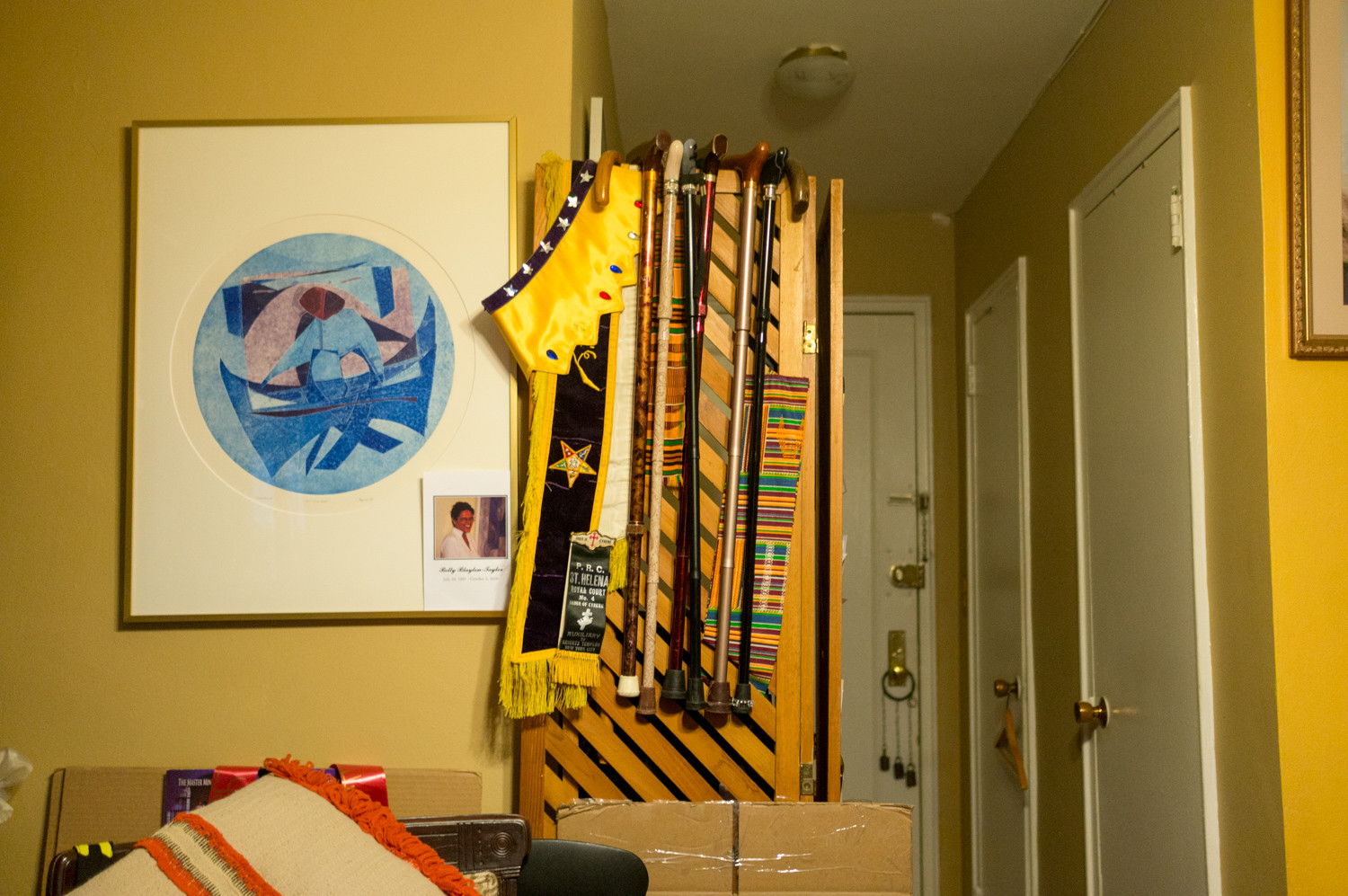 Delores Dixon uses a cane to help with balance when walking. She regularly battles with dizziness and headaches, but stays active nevertheless, practicing tai chi and line dancing. Currently on Medicare, she’d like to learn more about the New York Health Act, a bill sponsored by Assemblyman Richard Gottfried that would provide comprehensive, universal health coverage for all New Yorkers.
JULIUS CONSTANTINE MOTAL 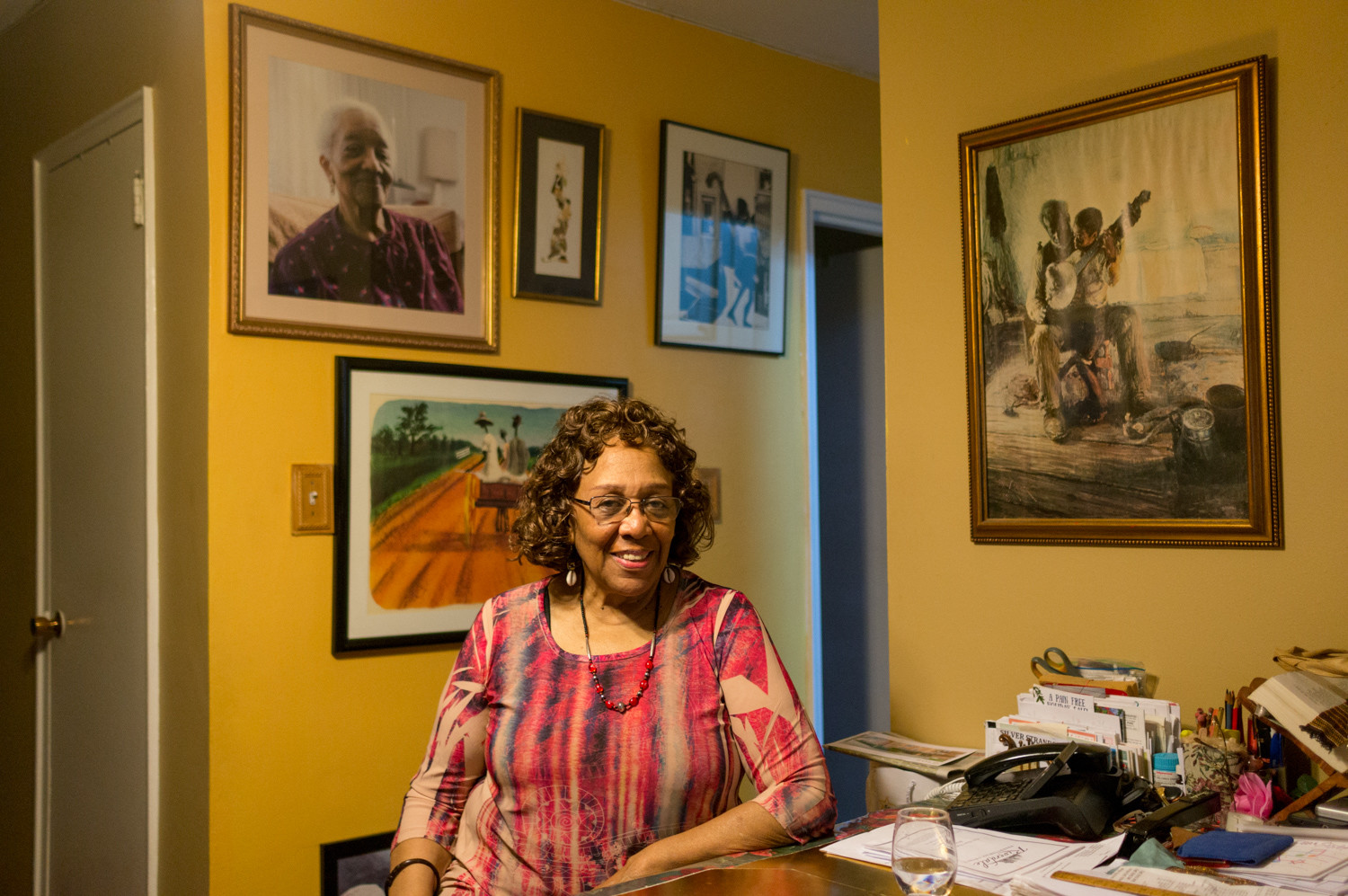 “It’s what some would call ‘vertigo,’” Dixon said. “Well, I am still walking with that today.”

Whatever it was — whatever it may be — Dixon isn’t certain. But it affects her “24/7” with dizziness and headaches, and needs a cane to keep her balance.

“You can’t call it ‘vertigo,’” she said. “Some people say, ‘Yes, I have vertigo, too,’ and they’re walking fine. Not me. I may have a little snap of a movement, and I could fall.”

Still, despite that plus ongoing pain from a knee replacement several years ago, and arthritis, Dixon leads a very active life. But if some lawmakers like Assemblyman Richard Gottfried get their way, how she’s treated — and how it’s paid for — could drastically change through the New York Health Act.

Supporters of the New York Health Act tout it as the solution, a bill that would bring to New Yorkers universal, comprehensive single-payer health coverage.

Proponents claim the health act offers better coverage than commercial insurance and Medicare, reducing costs for nearly all New Yorkers. The bill has passed the Assembly three times — including last year by a strong 94-46 vote — but stalls in the senate, lacking a single vote.

Last week, some 80 people packed the community room of Tibbett Towers to hear exactly how such a bill would work — and how people will pay for it — from the author himself. Gottfried represents large portions of Manhattan like Chelsea and Hell’s Kitchen, and has chaired the Assembly’s health committee since 1987.

Gottfried is “a catch,” said Bruce Feld, president of the Ben Franklin Reform Democratic Club, who brought the Assemblyman to Riverdale.

“He has so many decades of experience — engaging, funny and really knows his stuff,” Feld said. “This is really going to cut to the bone for a lot of people.”

Perhaps it should come as no surprise Feld would be reaching for answers at a moment when “the feds continue screwing with Obamacare.” He described a broken system where insurance companies charge high premiums, high deductibles and co-pays, and wield too much power over which doctors or hospitals patients can go to, and the kind of care providers can offer.

Add to that high administrative costs and it creates a burden on patients, doctors, employers and taxpayers.

At the meeting, Gottfried spoke of a plan that would “take insurance companies out of the picture,” giving patients freedom to choose their doctors with no network restrictions. Whereas currently “insurance companies want the same premium whether you’re the wealthiest CEO or the secretary struggling in the office,” the New York Health Act would create a more equal system with every New Yorker “in the same boat.”

It would cover all medically necessary services — from basic and preventive care to dental, vision and even mental health. It would be funded by a progressively graduated tax, based on ability to pay — on taxable income from employment, capital gains, interest, dividends.

Yet, it will still cost less than the current system — a savings of $71 billion a year, according to a University of Massachusetts at Amherst study — after profits and other administrative costs are eliminated.

A substantial chunk of those savings — $26 billion — would go toward increasing coverage, fairly paying providers, and retraining displaced workers.

Additionally, the health act would simplify and reduce costs for employers by taking them out of the business of buying health coverage.

Specifics will be fleshed out down the road, a point more than one resident at last week’s meeting expressed concern over given the community’s substantial senior citizen population.

Not everyone who attended the meeting was immediately sold on the plan, like Dixon, who took a cautious approach toward Gottfried’s presentation.

“I think it was a good thing that happened,” she said. “But we need to take this section by section, and see if there can be more perfection.”

Phyllis Minkoff expressed a tinge of skepticism, but acknowledged the current system is far from perfect.

“He’s interested in politics,” she said of Gottfried. “But people are people. If you don’t have enough physicians and personnel, it’s going to be utter chaos.”

Sylvia Lask stressed how important it is for all New Yorkers to have access to affordable care, and if the New York Health Act could ensure that, she’s all for it.

“I know what it is when patients don’t have insurance,” she said. “I just want to make sure mental health doesn’t get left behind.”

Herb Barret said he was concerned over how any new plan could affect retirees, but acknowledged replacing private insurance company coverage with a universal single-payer system might be beneficial.

“I get very confused about all the ins and outs of all the health plans,” Barret said. “They’re very intricate because they’re all big companies — it’s such a mix, it’s terrible.

If support is growing for single-payer health care, the question of whether and when the New York Health Act becomes fully achievable could hold mighty stakes, Feld said.

“Little by little, a consensus may build on this,” he said. “But between now and then, a lot of people are going to get hurt financially.”

And not just financially, Feld said. People who lack insurance and money to go to a doctor often postpone care.

“It can cost you your life.”