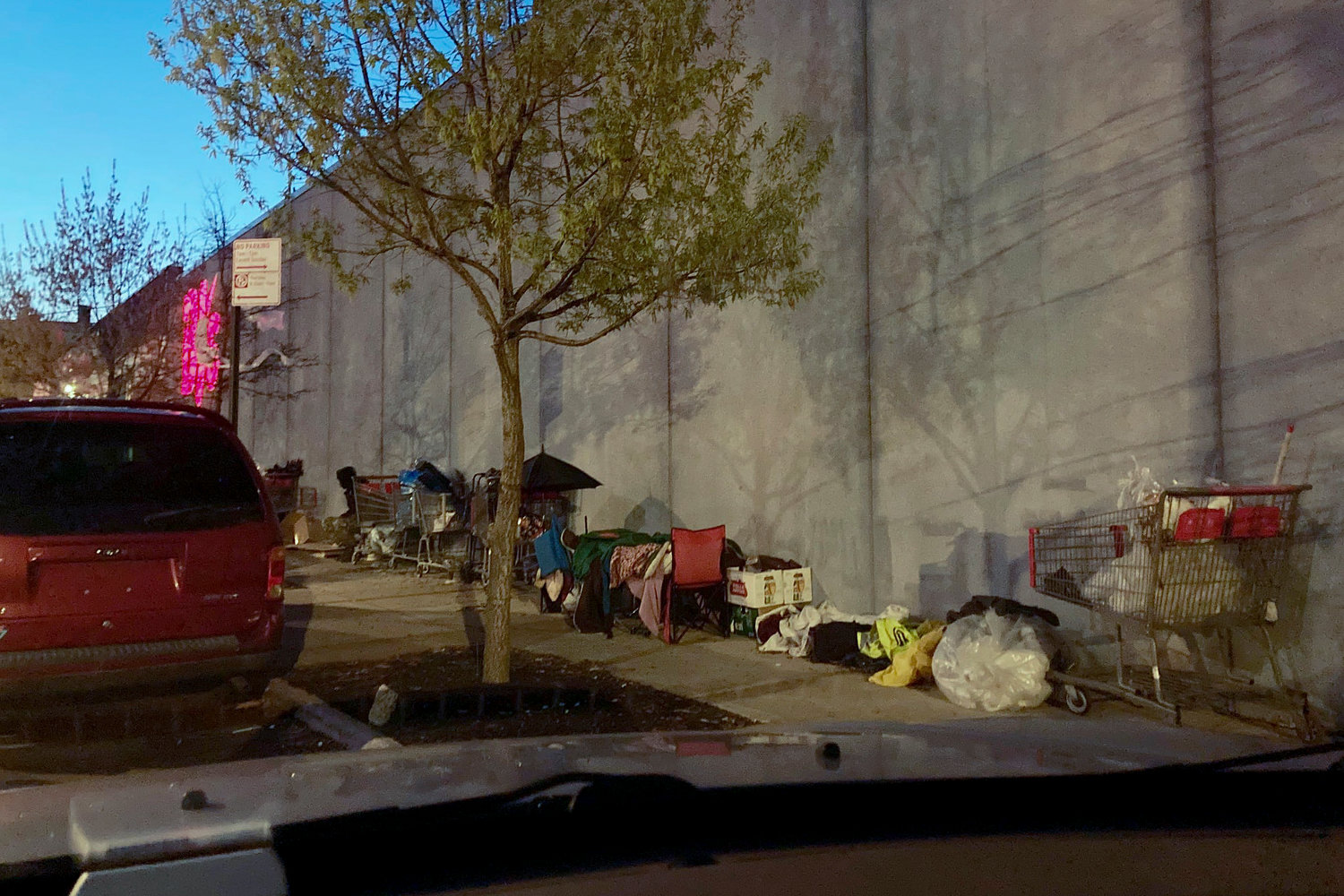 City officials cleaned the site of a homeless encampment last week near the intersection of West 236th and Broadway, a stone's throw away from NYPD’s 50th Precinct in Kingsbridge.
Courtesy of Ardina Seward 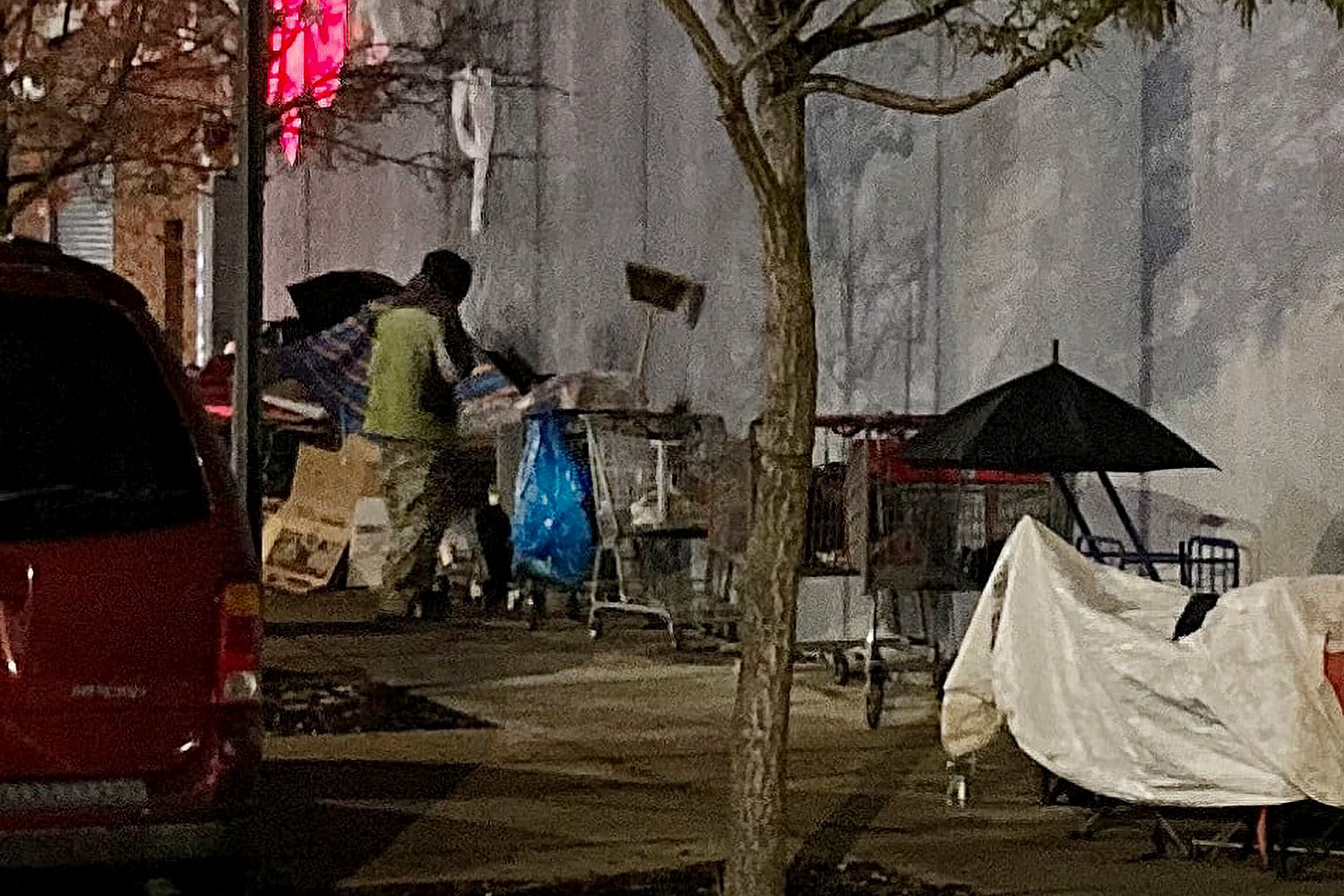 A homeless person tends to his belongings along the intersection of West 236th Street and Broadway recently. The city’s department of sanitation has cleared out that area since.
Courtesy of Ardina Seward
Previous Next
By JOSEPH DE LA CRUZ

“The site was surprising considering the location, which was adjacent to the 50th Precinct and directly on the sidewalk of retail giant BJ’s,” Seward said. “The site appeared to be very recent but continued to grow over a period of days until it was presumably dispersed by the department of sanitation.”

A New York Police Department spokesperson confirmed the sanitation department was called to the area to dispose of the debris in the area but made no mention of a team that would usually make visits to such an area to care for the homeless.

Community Board 8 chair Laura Spalter confirmed reports that the board received notice of an occupancy almost two weeks ago.

“The board contacted the department of social services,” Spalter said. “And they came right out and were able to offer services to the (people).”

The teams “visit any site at least 24 hours in advance of a cleaning to offer services to anyone there, provide notice, and allow time to gather belongings,” Lutvak said. “And then they return if necessary, to reiterate the offer of services and clean the public space in accordance with Sanitation Code.”

Meanwhile, Mayor Adams is touting his administration’s efforts to eliminate homeless encampments after announcing the program two months ago.

It’s been one of the mayor’s biggest agendas to help make the city safe and clean up the street.

Whether or not it made New York safer has yet to be seen but at the very least Adams has made it a point that those who are homeless will have a choice to live in better conditions.

“I have said since we started this initiative that every New Yorker deserves dignity, and we are demonstrating that this is possible,” the mayor said in a statement. “Our teams are working professionally and diligently every day to make sure that every New Yorker living on the street knows they have a better option while ensuring that everyone who lives in or visits our city can enjoy the clean public spaces, we all deserve.”

Since March 18, the mayor’s plan to help reduce the occupancy of above-ground homeless encampments, involved teams that consist of members of the NYPD, the Department of Homeless Services, the Sanitation Department, and occasionally the Parks Department. They visit encampments across the five boroughs, and offer social and health care services to homeless civilians living on the street.

Sanitation workers who are an integral part of the interagency teams, are often instructed to begin disposing of the belongings of homeless people who are occupying a public space.

But it’s the mayor’s effort at cleaning those public spaces that are controversial and drawing the ire of some in New York.

Still critics like Raphy Jacobson, an advocate for the homeless, say the treatment by city officials toward the homeless is anything but dignifying.

“And seeing these encampments has made people uncomfortable. It’s not dignified to trash people’s things, to send cops to destroy their belongings and put them in a Dumpster.”

Spalter advises residence to call 311 if they see anything like an encampment in the area and provide the tracking number to the board so that they may follow up with the city’s progress on getting service to the occupants.

From March 18  to May 1, task force teams made 733 location visits, according to the mayor’s office.

“This figure includes repeat visits and does not constitute a number of unique locations,” Lutvak said. “It also does not include the many recanvass trips that teams have made to evaluate the status of sites. All sites are recanvassed within 48 to 72 hours of a visit.”

Lutvak pointed out that of those visits, 710 resulted in a clean site, free of occupancy.

While Lutvak admits the figures are highly fluid and represent just a snapshot, he’s highlighted that in less than two months the interagency teams engaged 264 people.

For Jacobson, the issue is bigger than just removing transient people and their belongings from the street. The Riverdale native sees the mayor’s approach to homelessness as being shortsighted and failing to ultimately solve the homeless crisis, especially considering an eviction crisis that’s brewing in the housing court.

“We need real permanent solutions to housing, and you know I think it’s a real indictment of our shelter system as it is that people would rather be in an encampment because they don’t feel safe in a shelter,” Jacobson said. “We also need to move away from congregant shelter models, which are just cesspools for diseases, even before Covid.

“This would actually give people opportunities to move off the street and actually have dignified housing opportunities. This is not dignified. This is just because we don’t actually want to talk about the situation and the crisis we’re already seeing.”