NYPD program becomes outlet to mentor local youth in their communities through sports. 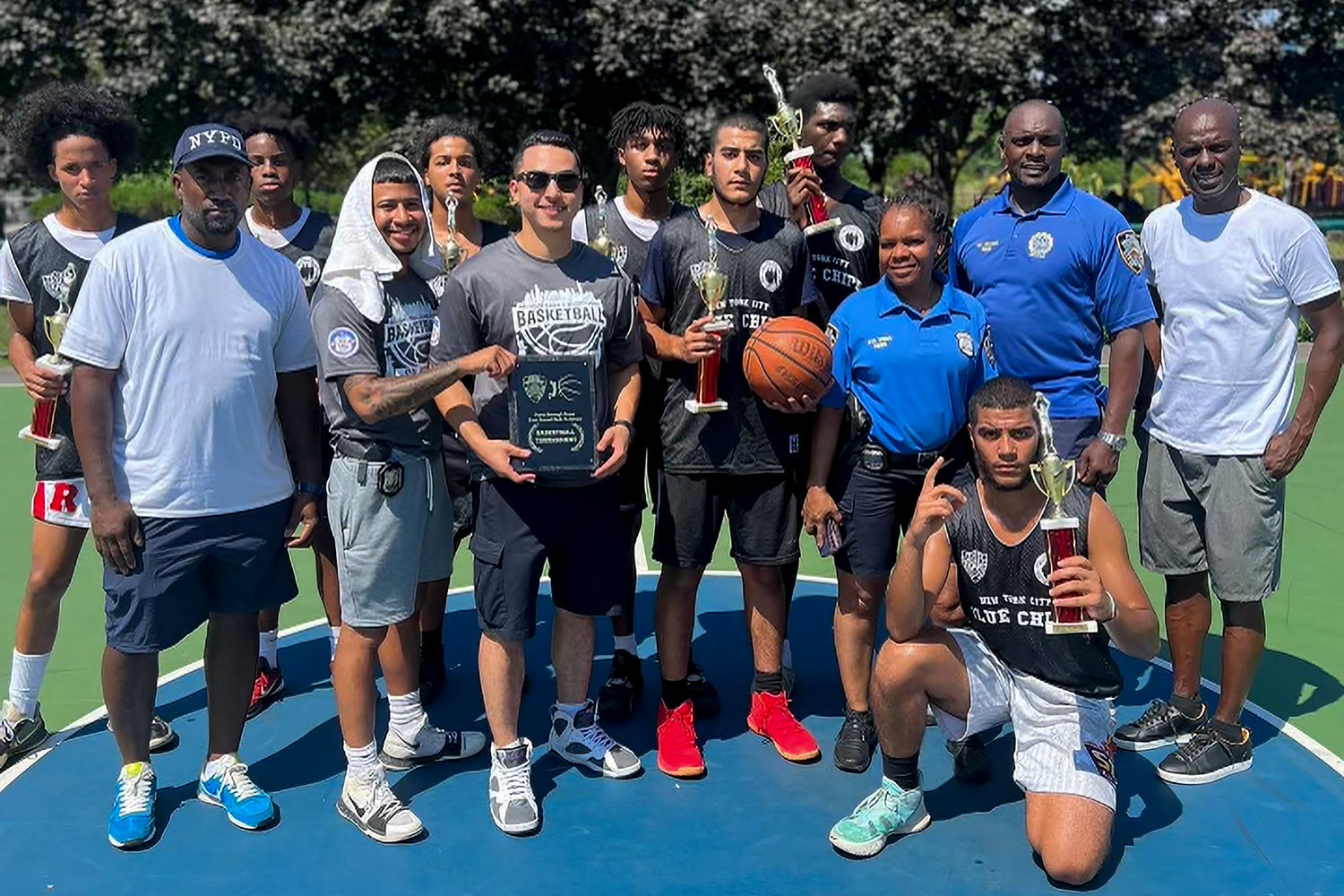 The 50th Precinct’s basketball team formed through the NYPD Blue Chips program won the Bronx Borough Championship after winning eight games against other Bronx-based precincts. The wins aren’t just coming on the court, however, with the program also providing academic and social support to the teenagers involved.
Courtesy of NYPD Blue Chips 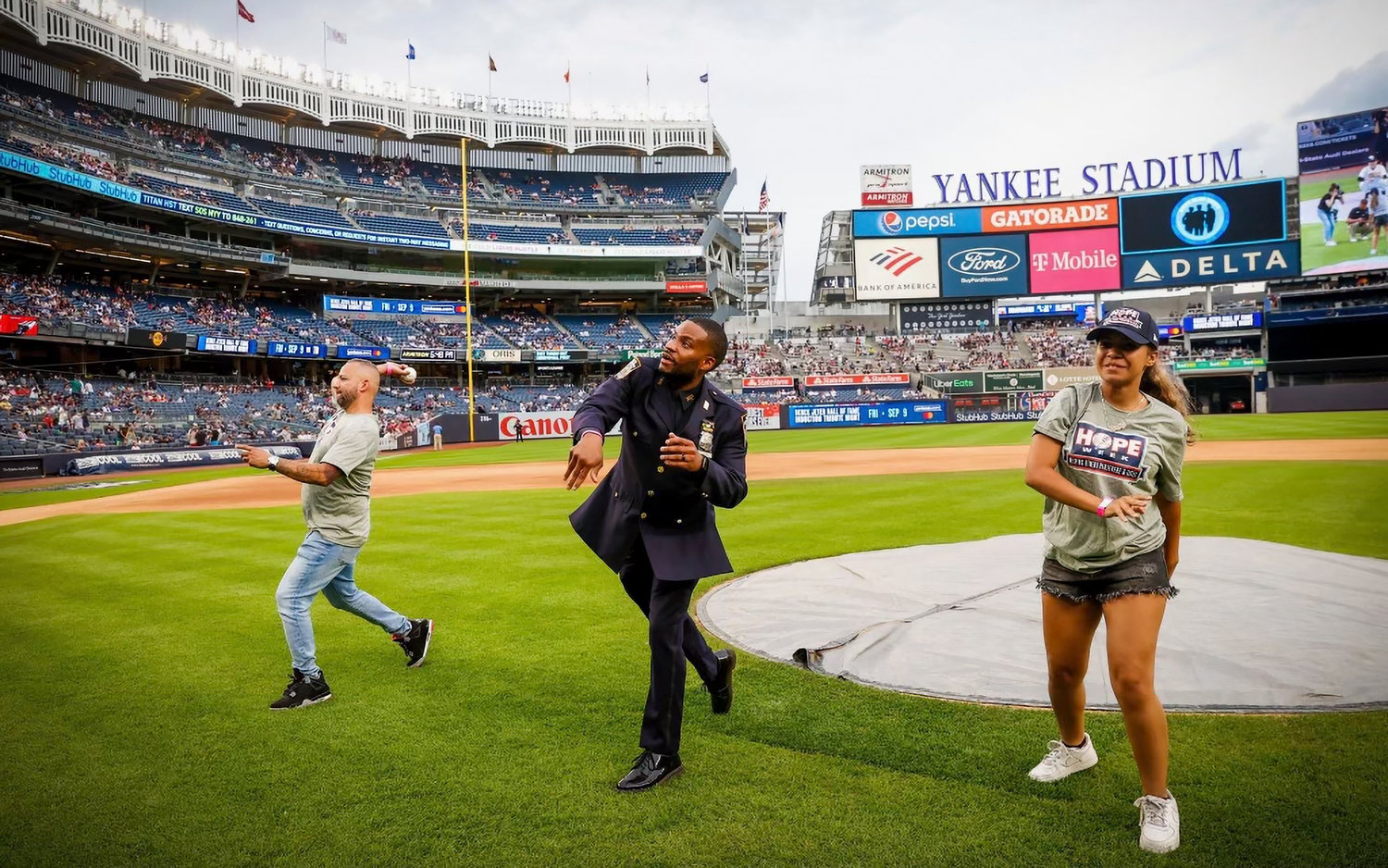 Officer Darnell Gatling, center, and Lt. Michael Almonte threw out the first pitches on July 12 before a game between the New York Yankees and Cincinnati Reds at Yankee Stadium. The recognition of the NYPD Blue Chips program came as part of the Yankees HOPE Week initiatives.
Courtesy of the New York Yankees
Previous Next
By Pete Janny

Answering calls from the community is in their DNA. And nowadays, the New York Police Department is offering another service through a program that combines recreation and mentorship opportunities for the youth.

Since it was created in March 2021, the NYPD Blue Chips program has created an outlet for kids ages 12 to 18 to stay active with sports and maintain their grades in school. The participation numbers are on the rise, with close to 3,000 kids from around the city signed up and every precinct involved.

“It was inspired by Lt. Mike Almonte and he was always a sports guy growing up in Queens,”said Officer Justin Rodriguez of the 50th Precinct about the now retired cop. “He had a vision to connect the NYPD with local youth through sports.”

Rodriguez and other officers from the 50th precinct are running with the opportunity to help grow the program.

Rodriguez coached the travel basketball team made up of a dozen or so players from Riverdale and surrounding areas. He took his team all over the city to practice and play making the rounds to City College, Hostos Community College and Manhattan College’s Draddy Gymnasium. Their efforts yielded a Bronx Borough Championship by winning eight games against teams coached by other Bronx precincts. Only a team from the 110th precinct in Queens was able to beat them in the playoffs.

“One team got to represent the Bronx out of the 12 precincts,” Rodriguez said of his team advancing to the city-wide games. “The biggest thing is just meeting people through the love of the game.”

The sports seasons rotate throughout the calendar year. The end of the summer means the end of the basketball season, with flag football set to begin in November and then volleyball and softball scheduled after that. Two cops from each precinct are responsible for coaching and mentoring their teams over the course of the year.

“What we do here at the 50th precinct is we try to let as many kids as possible participate,” Rodriguez said. “Whoever wanted to show up, I had them show up.”

And it’s offered completely free of charge for families year round. By doing it this way, they don’t distract from the bonds being created between the kids and their neighborhood cops.

“There’s not many leagues out there you get your kids into without having to pay,” Rodriguez said. “Community engagement is really important and it starts with our youth in our communities.”

Jimmy Gomez, a junior at Roosevelt High School in Yonkers, plays on all the sports teams organized by the 50th Precinct. He plans on sticking with NYPD Blue Chips as long he can due to the confidence-building and personal development skills it affords him.

“It helps you grow as a person and be more mature,” Gomez said. “We learn to treat each other with respect.”

It starts with Rodriguez visiting local schools to spread the word to principals and coaches about NYPD Blue Chips. This word-of-mouth marketing gives him a direct line of contact to students who are ready to invest more in sports and education. The latter part being especially crucial.

“We always go back to check on their grades,” Rodriguez said. “And making sure they are not getting into any trouble.

Darnell Gatling, a program coordinator for NYPD Blue Chips and an officer in the 105th precinct, is sort of a folk hero in this movement. Gatling played college basketball at Seton Hall from 2008 to 2011 under former Manhattan Jaspers coach Bobby Gonzalez. Then, after a stint playing professional hoops in the Dominican Republic, Gatling chose to join the police academy and officially joined the ranks in 2015.

Growing up in Brooklyn with his father in and out of jail, Gatling told himself he would be part of the solution from an early age. And now he’s getting his message across one kid at a time.

“I know the power of mentoring,” Gatling said. “We want to give these kids every possible outlet.”

Once he became a cop Gatling hit the ground running with different ideas like back to school backpack giveaways to help the local youth. But it wasn’t until Gatling introduced his idea of forming an AAU Basketball League when the momentum for NYPD Blue Chips began to take off.

“We started out as a small family, probably about 40 kids in the beginning,” Gatling said. “I would sit down with them and helpt them do homework and register the older kids for city tests and going on college tours.”

Gatling recalls the time when a group of kids on the subway started causing a raucous before another kid intervened. Two of the boys knew each other from the program and the power of their brotherhood helped de-escalate the situation.

“Getting these kids out of the norm, showing them and giving them resources is what it’s all about,” Gatling said.

Asked about his five-year plan for the program, Gatling wants to see Blue Chips, or a facsimile of it, extend to different states and cities around the country.

“I could see Jersey having Blue Chips and all the way to California,” Gatling said.

On July 12, members of the New York Yankees arrived at the NYPD Police Academy in Queens to meet the organizers of NYPD Blue Chips. And the Bronx Bombers returned the favor by inviting them to a game that night and honoring them before first pitch.

“It was a really nice experience and eye-opening,” Rodriguez said. “We were able to go on the field before the game with several hundred kids who are part of the program and get several autographed jerseys and baseballs.”

In conjunction with the New York Dominican Officers Organization, NYPD Blue Chips coordinated the first annual Det. Jason Rivera & Wilbert Mora Basketball Classic held at Brooklyn Bridge on July 20, which honored the two cops killed back in January of this year while responding to a domestic violence call in Harlem.  There were 150 players who showed up to give their best effort for two men who cared deeply about them.

“Any chance we get to honor our fallen, we look forward to doing it,” Gatling said. “There was unity in the park that day and no one walked away from there a loser.”

NYPD Blue Chips allows kids to be kids. And for the officers who were once in their shoes, it means everything to see them smiling and having fun no matter where they come from.

“I didn’t realize how much this program would help us cops,” Gatling said. “There are so many cops struggling with the day-to-day and through this they get to showcase their skills to the youth.”