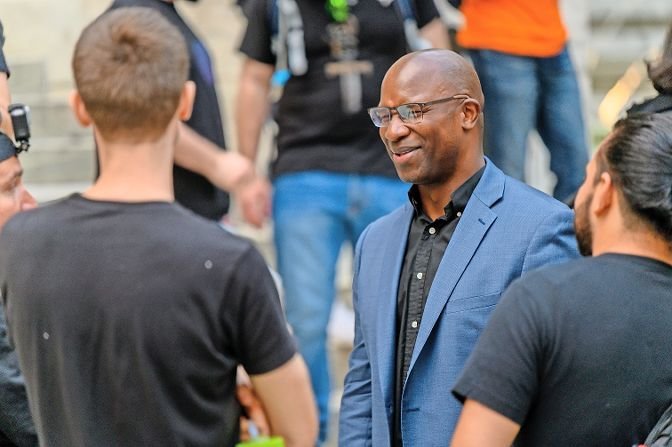 While the U.S. House considers introducing articles of impeachment against Donald Trump for a second time, newly minted U.S. Rep. Jamaal Bowman is making moves to find out exactly what happened in the insurrection attempt against Capitol Hill on Wednesday, introducing his first bill as a congressman to help get to the bottom of it.

Bowman is readying what he calls the Congressional Oversight of Unjust Policing Act — or the COUP Act — which he says would establish a national commission to investigate the mob attack of the congressional chambers this week while lawmakers were certifying Joe Biden's presidential win. Bowman wants the commission to address what he describes as systemic failures in the Capitol security apparatus, and investigate alleged ties between members of U.S. Capitol Police and white supremacist movements.

"How does it happen that a group of armed, violent insurrectionists are able to march into one of the most secure buildings on Earth and force members of Congress to hide under their desks?" Bowman said, in a release. "This is not entirely a story of incompetence on the part of law enforcement, and we have to ask: Did some of those charged with protecting us willingly lay down their posts? Was there a coordinated effort to take over the United States government with violence? Why wasn't there a coordinated effort from the beginning with other members of law enforcement?"

The commission would be charged with issuing a report at the end of its investigation recommending specific measures and reforms to realign recruitment, hiring and retention policies, and practices of the Capitol police to address biases, according to a release — both "conscious and unconscious."

The congressman says he hopes this will lead to changes to existing laws and federal programs while offering suggestions for actions the private sector can take as well.

Bowman had barely been on Capitol Hill for a week when the congressional chambers were attacked by a mob that many say were incited by Trump, who hasn't accepted the results of the November election. Bowman immediately tied many of those involved in the incident to white supremacists, with some citing the presence of Conference battle flags — long tied to racism in this country — marched through the halls of the Capitol.

The COUP Act already has support from U.S. Rep. Marie Newman of Illinois, who told Bowman on Twitter that "we need answers and we need them now."

Bowman also has expressed support for removing Trump from office, even though he's set to step down in less than two weeks anyway. House members plan to charge Trump with, among other things, incitement of insurrection.