Bronx book mobile bound for a market near you 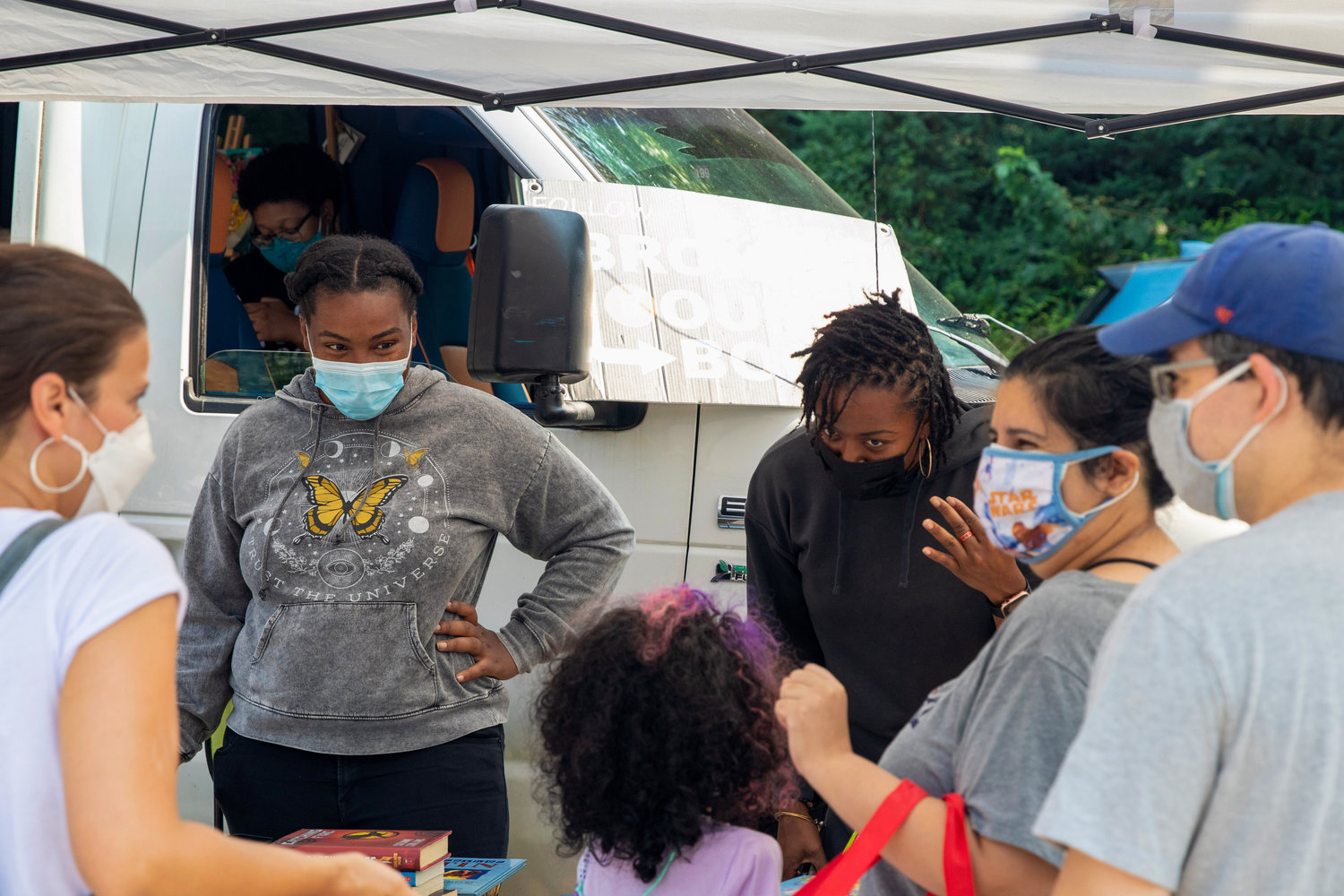 Latanya DeVaughn stands in front of the bus that houses her mobile store, Bronx Bound Books, at The Riverdale Y Sunday Market. DeVaughn decided to take her bookstore on the road because storefront space in the borough is too expensive. Plus, it’s good to be out in the community.
BRIAN ASARE 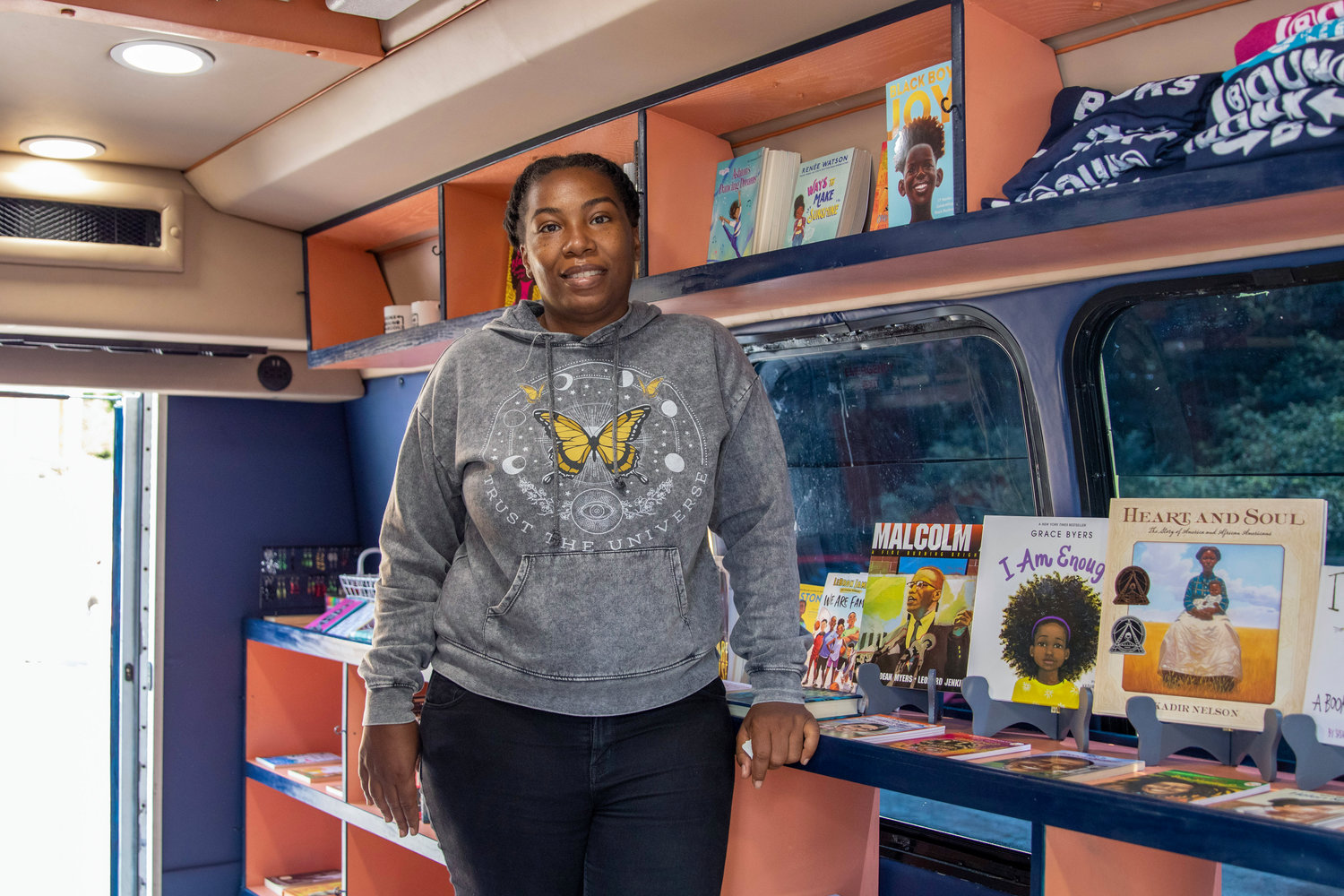 Bronx Bound Books founder Latanya DeVaughn says she likes to showcase authors of color on the shelves of her mobile bookstore. For her, it’s important to showcase authors who truly reflect the racial and cultural makeup of the Bronx.
BRIAN ASARE
Previous Next
By ETHAN STARK-MILLER

If there’s one thing the Bronx — or most places — is lacking, it’s bookstores. In fact, The Lit Bar in Mott Haven is the borough’s only independent brick-and-mortar bookseller, and it’s a long trip for many. Even with a car.

Kirstie Reynoso-Miranda is trying to fix this problem by opening her own bookstore — Miranda Writes — somewhere in Kingsbridge or Riverdale. In the meantime, she’s selling books online while the neighborhood waits until at least early next year for a physical location to open.

Fortunately, bookworms eager to crack open a new paperback are in luck. That’s because Bronx Bound Books brings its wares to The Riverdale Y Sunday Market almost every week.

Offering an array of diverse authors from a refurbished bus, Bronx Bound Books has set up shop not only at the Sunday Market, but also other farmers markets across the borough, like one outside Clinton High School, and on City Island.

Why a bookstore on wheels? Latanya DeVaughn says it was the easiest way to make her dream of owning such an establishment a reality.

“I always wanted to own a bookstore,” she said. “But the Bronx kept changing and life kept happening. Before I knew it, the rents were way too high, and gentrification started to take a toll on the Bronx. So, owning a storefront was totally out of reach. I knew I would never be able to afford one.”

DeVaughn started Bronx Bound Books as a project she juggled on weekends in addition to her day job — working human resources for Eli Zabar, an Upper East Side restaurant and food market. But when the coronavirus hit the city last year, DeVaughn was one of many laid off. Suddenly, she had a lot more time to devote to her dream.

“COVID made my Plan B kind of my Plan A,” DeVaughn said. “I decided to invest all my time and energy into growing Bronx Bound Books.”

Growing up in the borough, DeVaughn says she inherited her love for all things literary from the grandmother who adopter her, a teacher.

“I knew that literacy was important, even as a young child,” DeVaughn said. “I would see her reading leases and prescriptions to our neighbors who couldn’t read.”

“I would find my escape in the Strand Book Store,” DeVaughn said. “So, we were able to get me a whole bunch of books. And my love for new and used books started from when I was a kid. We would go to garage sales — and everyone would be looking at china and furniture — and I was by the books and would buy all the books I could carry.”

The most important thing to DeVaughn was making a bookstore that catered specifically to Bronx communities. As she developed her concept, DeVaughn attended business improvement district events around the borough, asking people what they wanted out of a bookstore.

She would give away used books at those events — getting her supply from The Book Fairies on Long Island. Then, at the beginning of 2020, DeVaughn started selling books at farmers markets.

In the beginning, DeVaughn relied on rides from friends and Ubers to transport her inventory around the borough.

“It was very limited, because I could only carry so much in an Uber or load in a friend’s car,” she said. “And then having to onload the books and hoping it didn’t rain.”

With her savings and book sales, DeVaughn purchased a used shuttle bus she found on Craigslist about a year ago. Around the same time, she received a grant from the Ford Foundation’s Local Initiatives Support Corp., which has now provided $215 million in such offerings to 12,000 small businesses throughout the pandemic. DeVaughn used that money to hire Ortega Upholstery Designs to refurbish the inside of her bus and make it feel more like a bookstore.

She’s still raising money to paint and fix the bus’s exterior, but inside, DeVaughn carries all kinds of books. Yet she still finds room on her limited shelf space to display works by authors of color.

“That’s what you see, because that’s who I am,” DeVaughn said. “I’m Afro-Latina. I’m half Black and Puerto Rican. The books that you see when you walk in look like the people in the Bronx. So, there will be other books on the shelves and things like that. But for display purposes, I really want to showcase what the Bronx really looks like.”

And that focus on representation has resonated with her customers.

An older woman, “someone who’s about 73, was very emotional because she didn’t have this representation when she was growing up,” DeVaughn said.

“She has this gorgeous selection of books,” Silverman said. “They are terrific books. I mean, they’re really good. They’re carefully selected. They’re books that you actually want to read.”

For the time being, DeVaughn has no plans of scaling up to a physical storefront — mostly because it’s still an expensive proposition. But also, she feels it’s important to meet people where they are and be out in the community.

“If it takes you more than a half-hour to get to your nearest bookstore, I want to meet you halfway and be there for you,” DeVaughn said. “So, you don’t have to travel so far just to buy a book.”