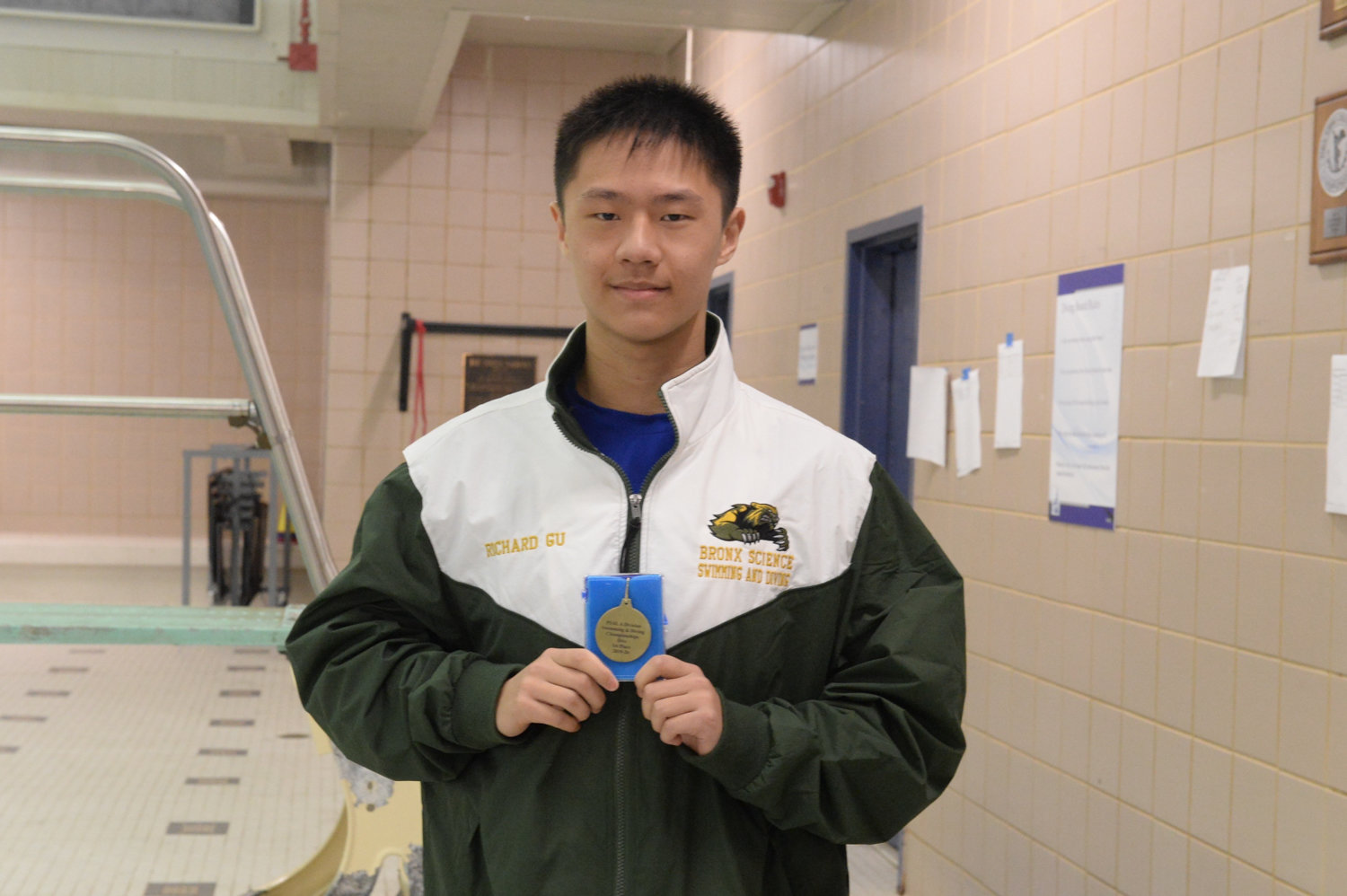 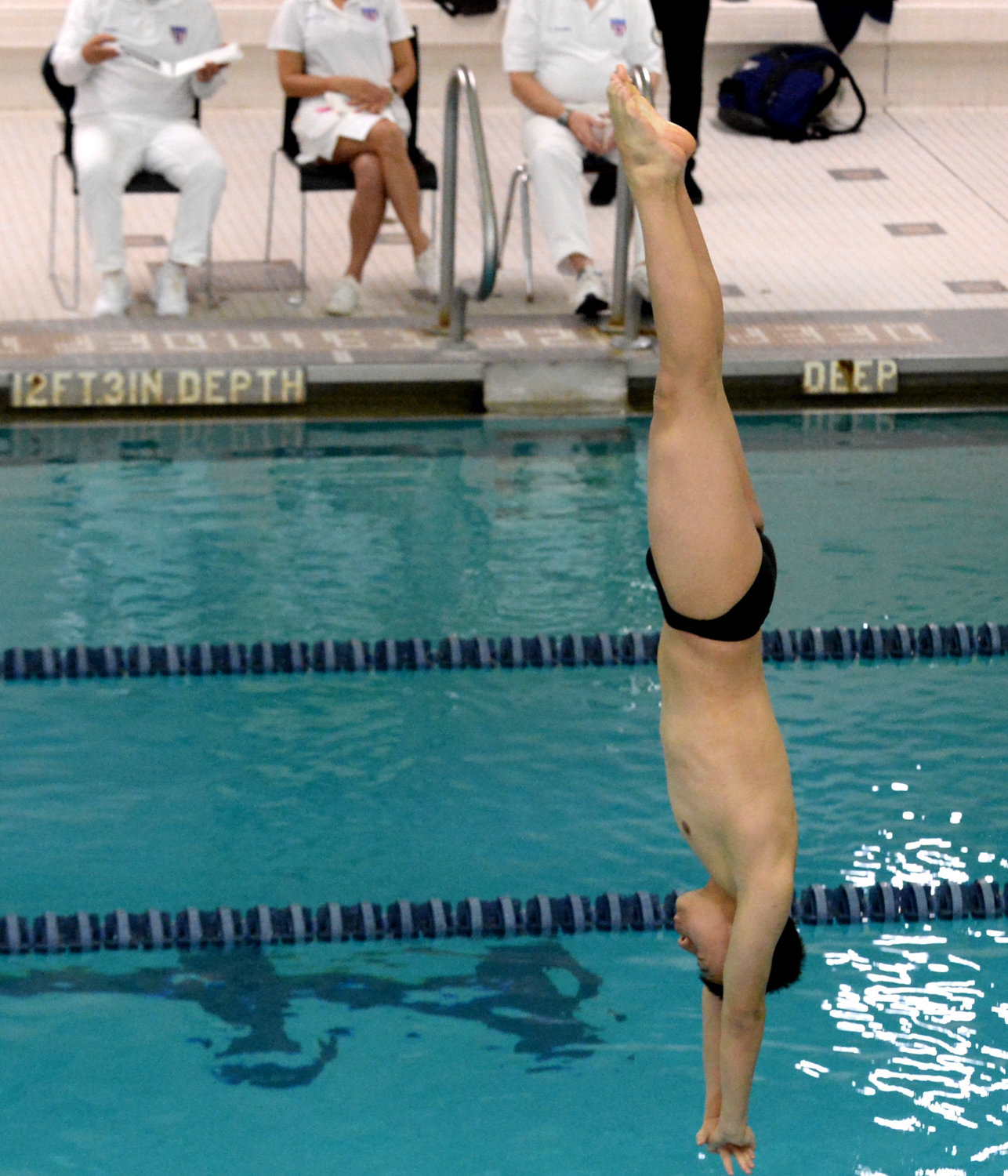 Bronx Science sophomore Richard Gu shows off the form that made him the Public School Athletic League’s diving champion this season.
Courtesy of Damion Reid
Previous Next
By SEAN BRENNAN

There is not a whole lot of wiggle room in Richard Gu’s daily schedule.

When he’s not making his daily commute to Bronx Science from his Fordham home, he’s busy piecing together a plan of just how to fit Science’s legendary school workload with an equally heavy weekly practice schedule. All while finding some time to sleep.

Oh, and there is also his daily excursion to practice each day that eats up even more of his precious little free time. Because unlike a basketball or volleyball player, Bronx Science doesn’t have the facilities to cater to Gu’s particular sport.

Gu is a diver. And a very good one at that.

“Normally I go to school, and when I come home sometimes, I take an hour or two nap before my practice, which starts at 5 o’clock,” said Gu, a sophomore. “Other times I won’t nap and I’ll go home and do some homework before practice because Bronx Science’s workload is huge. Practice is from 5 to 7 (p.m.), and I do that six times a week.”

Gu’s love of diving was born out of a chance meeting at work between his mother, Kathy — a financial officer at the United Nations — and Zhihua Hu, now his longtime diving coach.

“I was introduced to (diving) by my mom,” Gu said. “She met my diving coach at a meeting at work. She gets to meet a lot of people. I thought it was quite an interesting sport. Not many people do it, so that kind of got me into it at first.”

Gu was in fourth grade when that meeting happened, and he has since flourished in his sport of choice. Last season, as a freshman, Gu finished third in the Public School Athletic League city championships, only increasing his appetite for diving.

This season, Gu went for the gold and got it, being crowned the PSAL city diving champion in a competition held at Fort Hamilton High School last month.

“I wouldn’t say I was confident going in, but I thought I practiced enough so all I could really do at the meet was do my best and see what I could get,” Gu said. “If I honestly did the best I could, then I would be happy with myself. And I was happy with how I did.”

Gu excels in his sport in relative obscurity as even Bronx Science’s “home” swim meets are held on the road. Science’s divers, like Gu, have it even tougher.

“Bronx Science doesn’t have a pool, so the swimmers go to (Walton High School) and use their pool,” Gu said. “However, that pool doesn’t have a diving board, so I have to use Fordham University’s pool.”

More travel in that tight schedule. But Gu is unfazed by the obstacles he faces.

And all his hard work paid off with a trip to the state championships this past weekend on Long Island.

“I think I did all right,” Gu said. “It was my first time, so I was nervous. But it was a great experience. I came in around the middle of 50 (divers). Maybe next year I can do better.”

With the PSAL diving season in the books, Gu now competes with his club team, the New York Diving Club. That club is run by Hu, now in his 22nd season as assistant men’s and women’s swimming and diving coach at Fordham, and also an Olympic training camp coach for China for the 1992 and 1996 Olympic Games.

Despite his long affiliation with Hu and his recent successes in diving, Gu doesn’t see an Olympic experience in his future.

“I don’t think it’s for me, because honestly, I think a balance between sports, my academics and my free time is the best for me,” Gu said. “I don’t know that I’d enjoy a life focused all on sports. I just don’t think it’s what’s right for me.”

Instead Gu — who boasts a 95 average at Science — might pursue a, well, drier profession.

“I probably want to pursue something regarding either computers or science,” Gu said. “I’m not exactly sure yet. I want to take some more classes and get a general idea of what I like. Right now I’m only taking two classes in science, biology and chemistry. So there are definitely more fields down the line that I could choose from other than those two.”

Whatever he decides to do, though, you can expect Gu to dive right in.