Buses on Broadway? Not with own lane, CB8 says 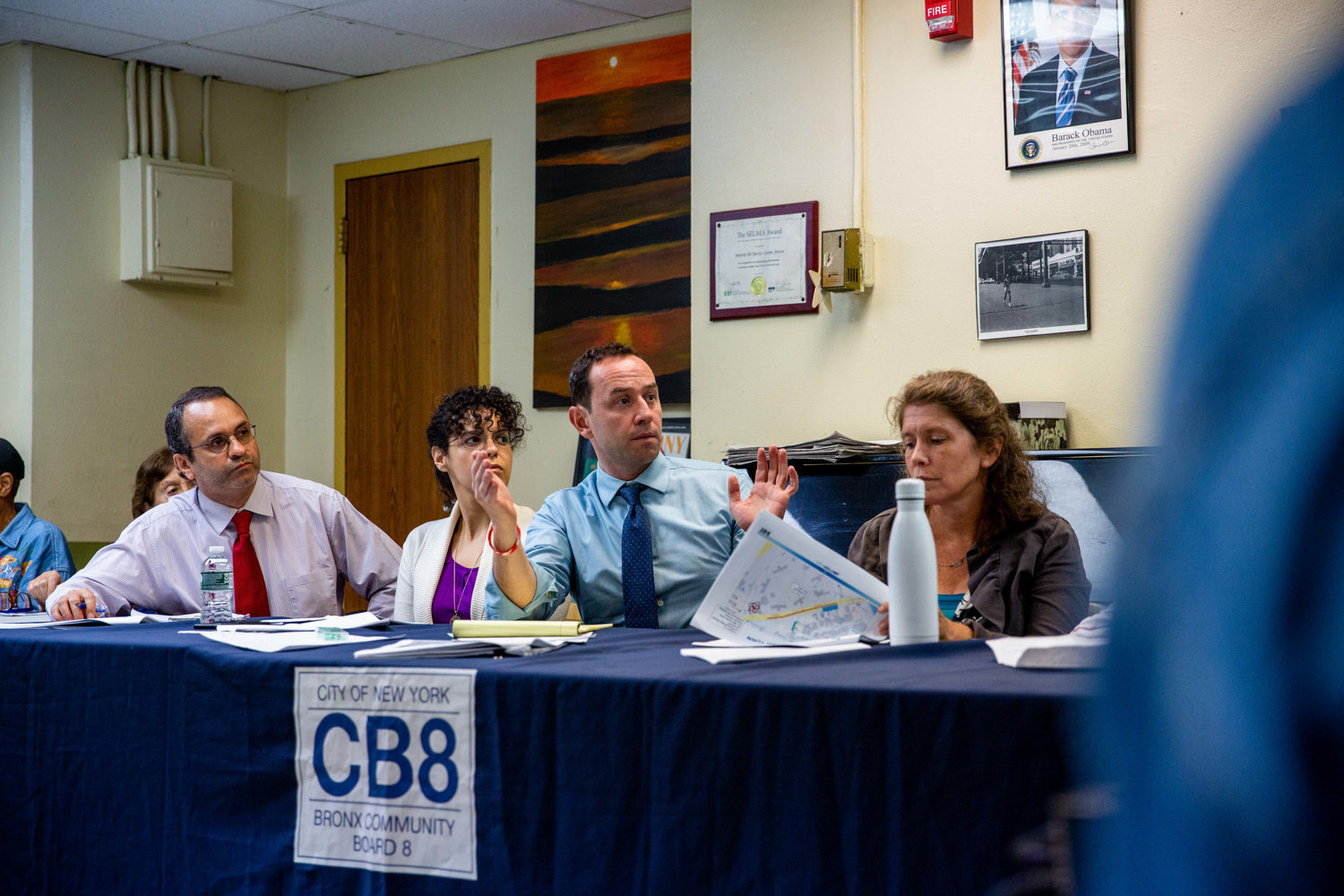 Dan Padernacht, chair of Community Board 8’s traffic and transportation committee, explains the stretch of spots the city’s transportation department seeks to remove with its plan to install a dedicated southbound bus lane on Broadway.
EIAN KANTOR 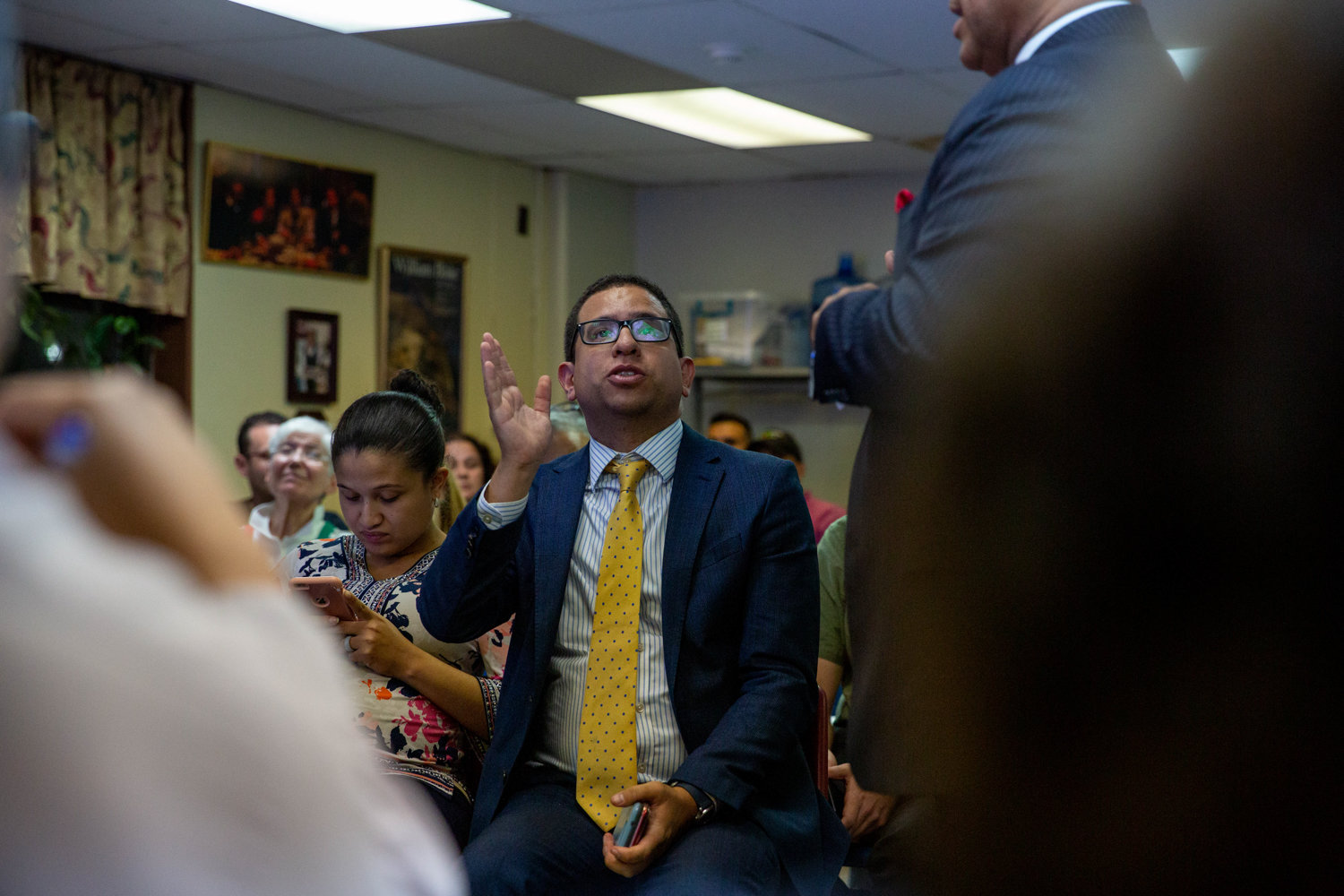 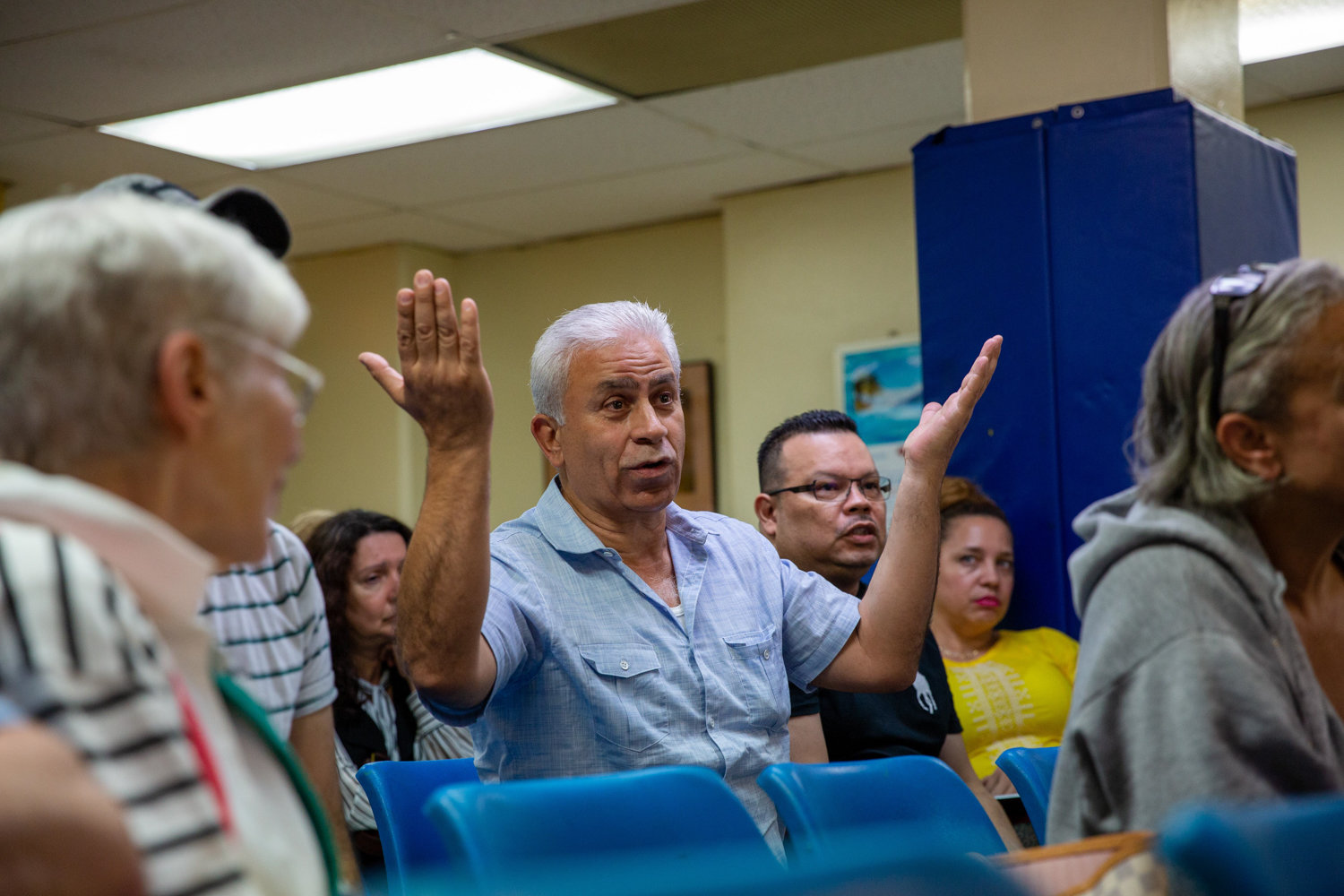 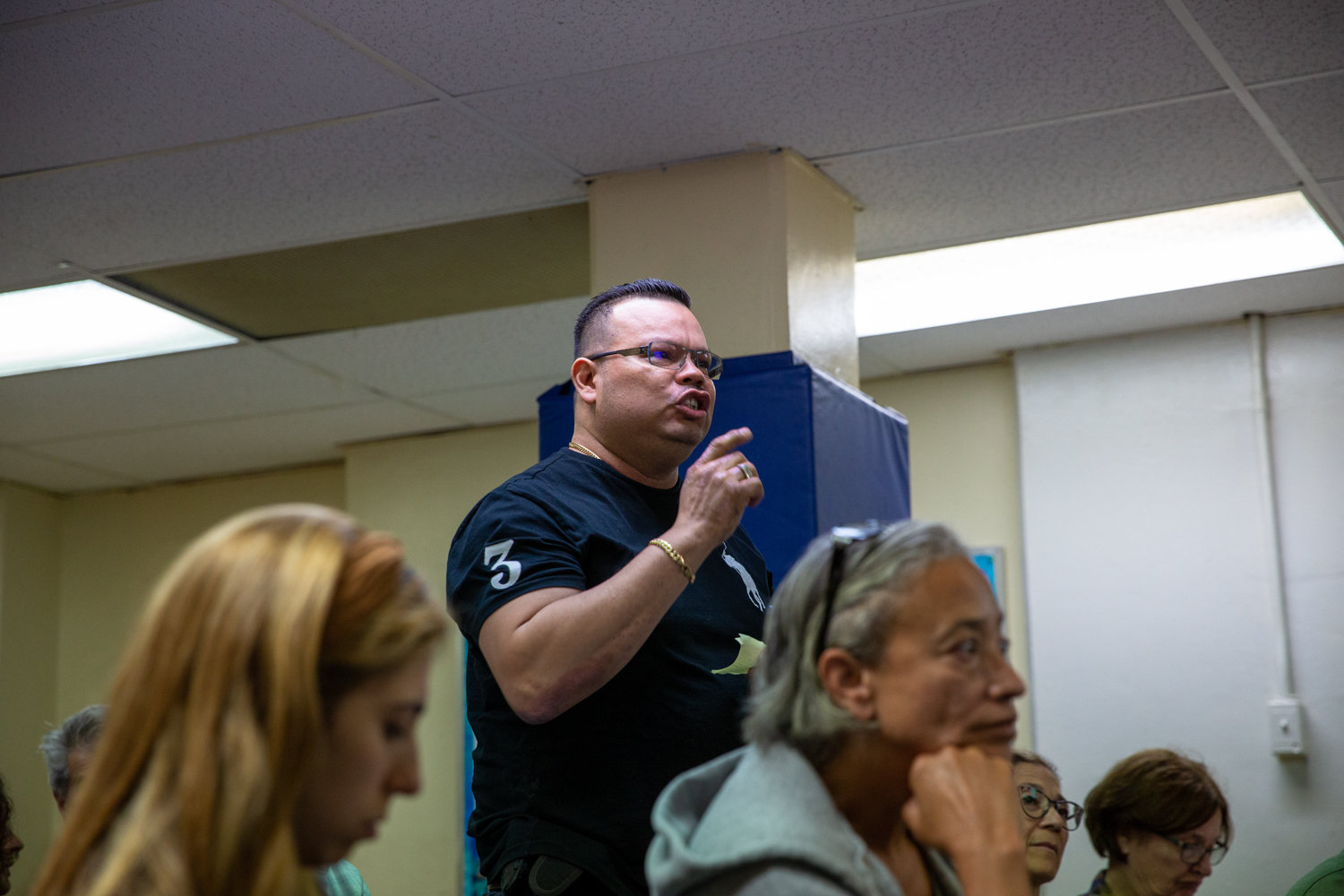 Orlando Kross, owner of Flowers by Zenda on Broadway, voices his opposition to the city’s transportation department’s plan to install a dedicated bus lane on Broadway between West 225th and West 228th streets because it will make deliveries exceedingly difficult.
EIAN KANTOR 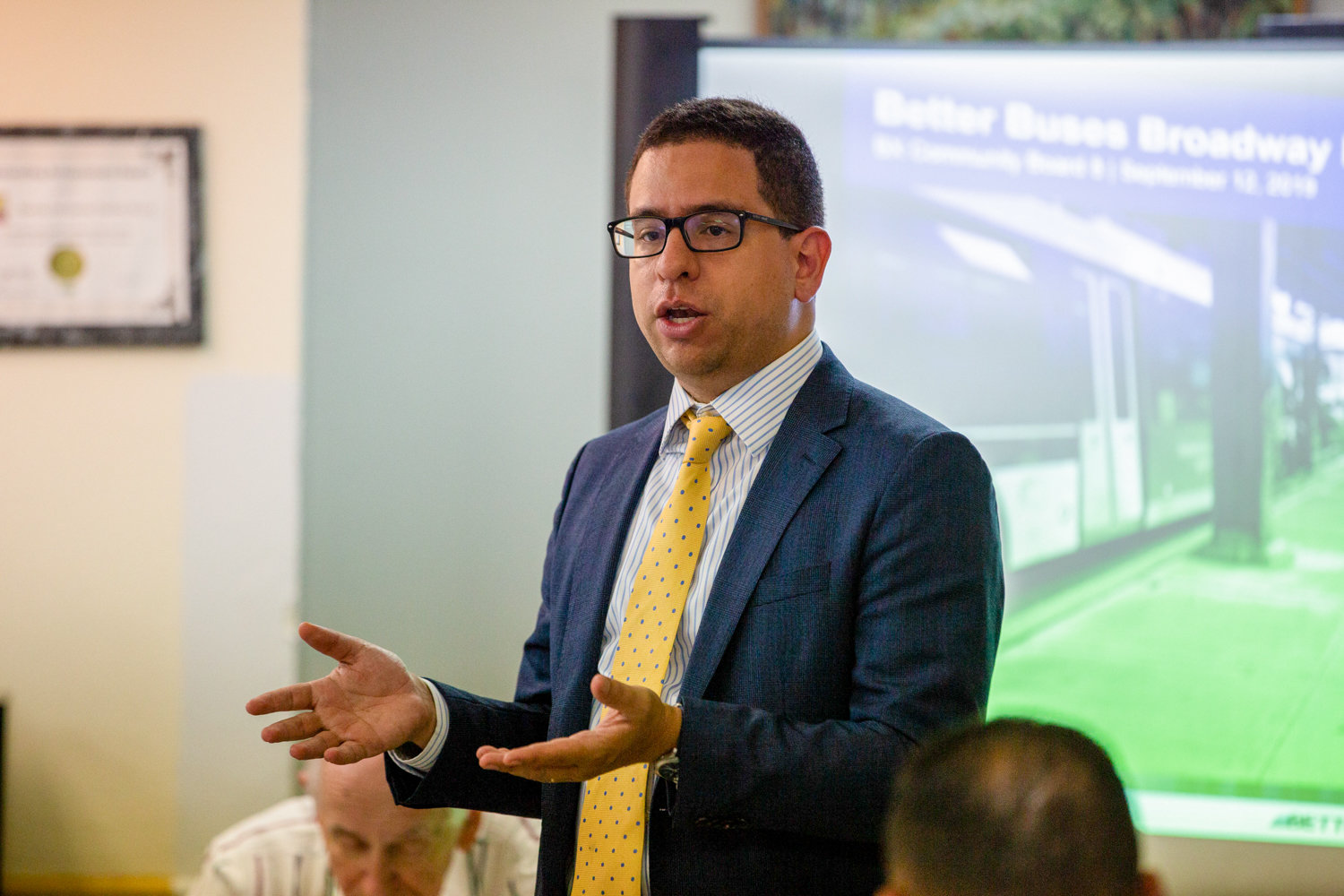 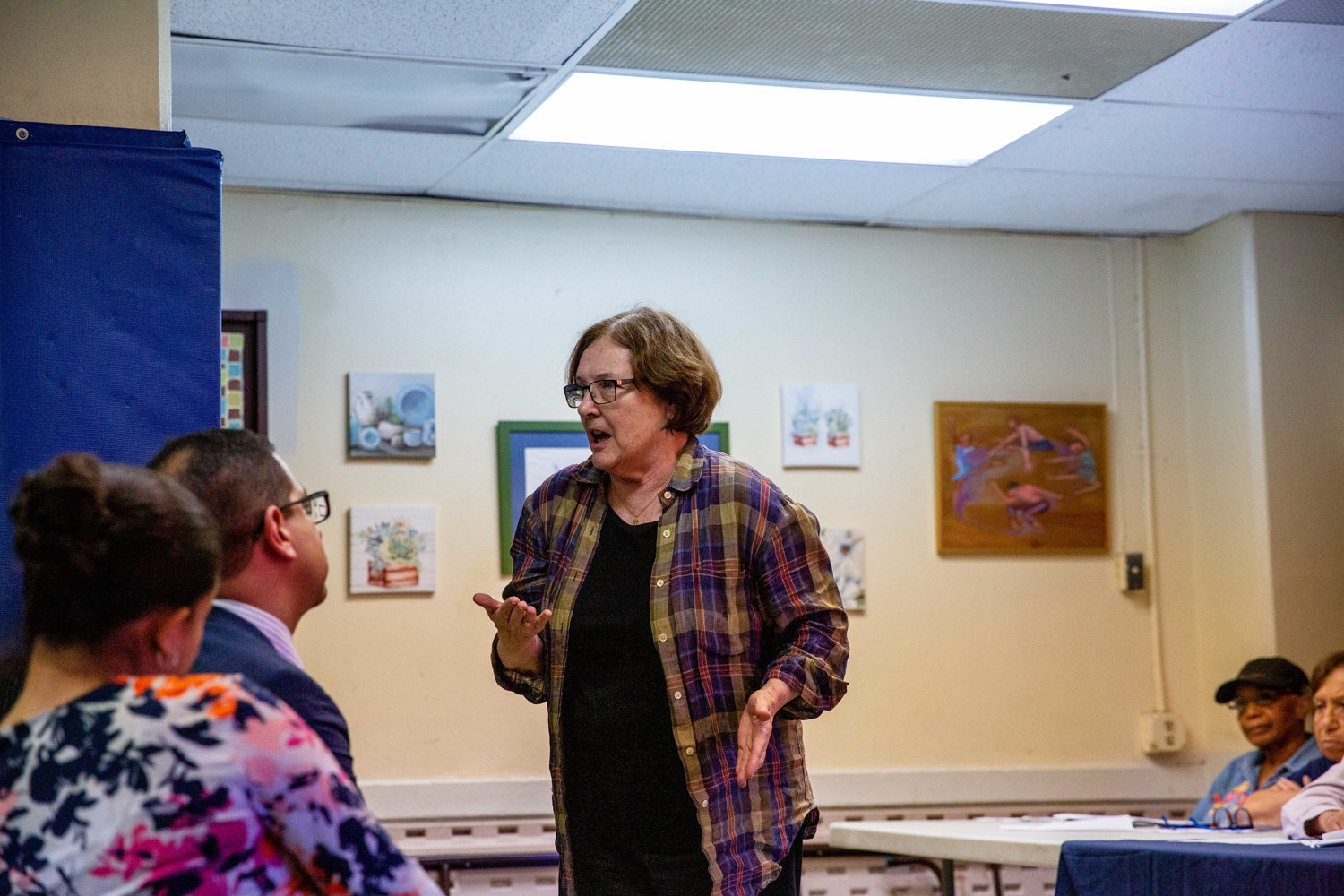 Community Board 8 chair Rosemary Ginty echoes the sentiments of many community members in their opposition to the city’s transportation department’s plan to install a dedicated bus lane in the Marble Hill section of Broadway.
EIAN KANTOR 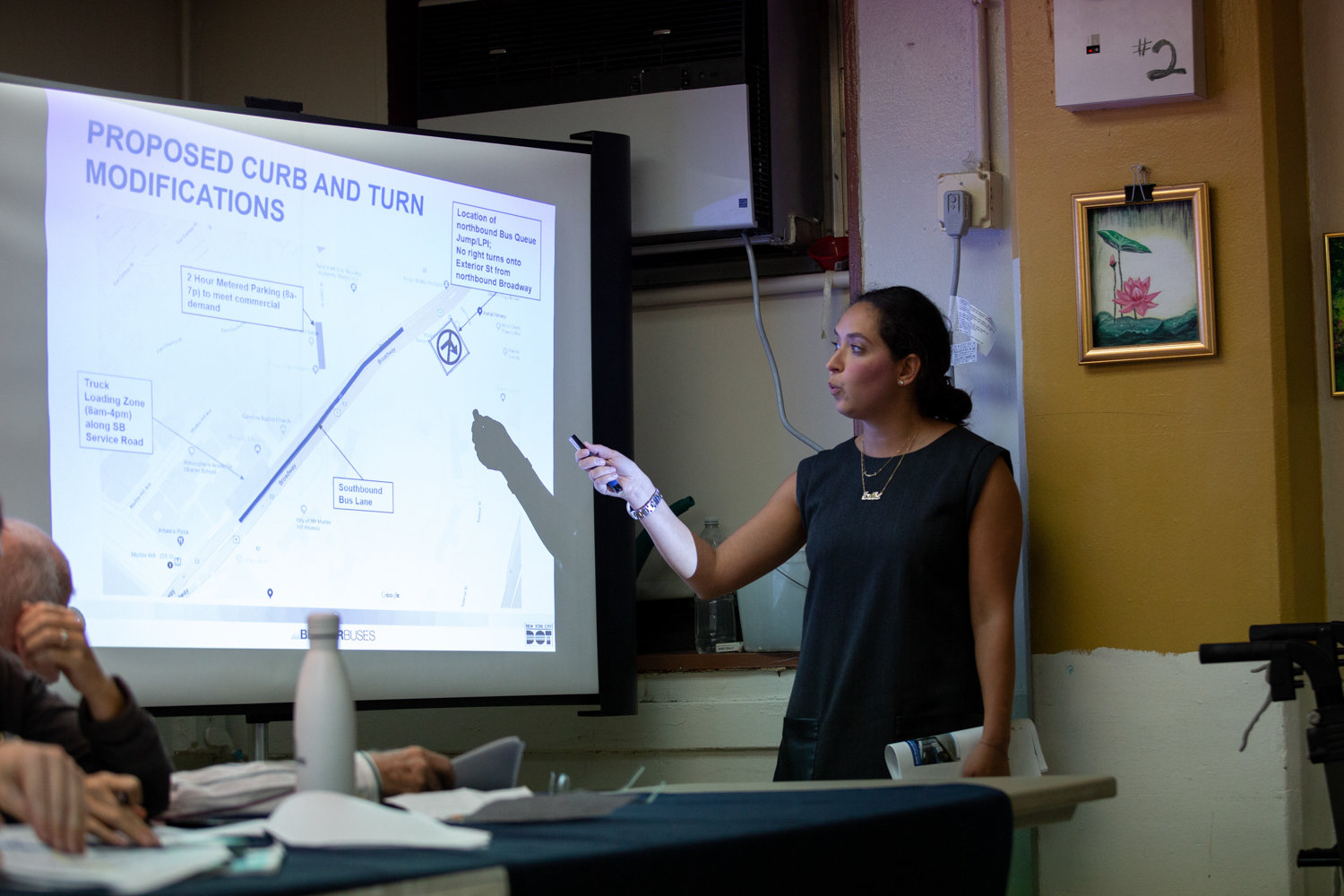 DOT project manager Julie Schipper runs through the proposed traffic modifications to the Marble Hill section of Broadway during Community Board 8’s traffic and transportation committee meeting last week. Among the proposed changes for that stretch is a dedicated southbound bus lane.
EIAN KANTOR 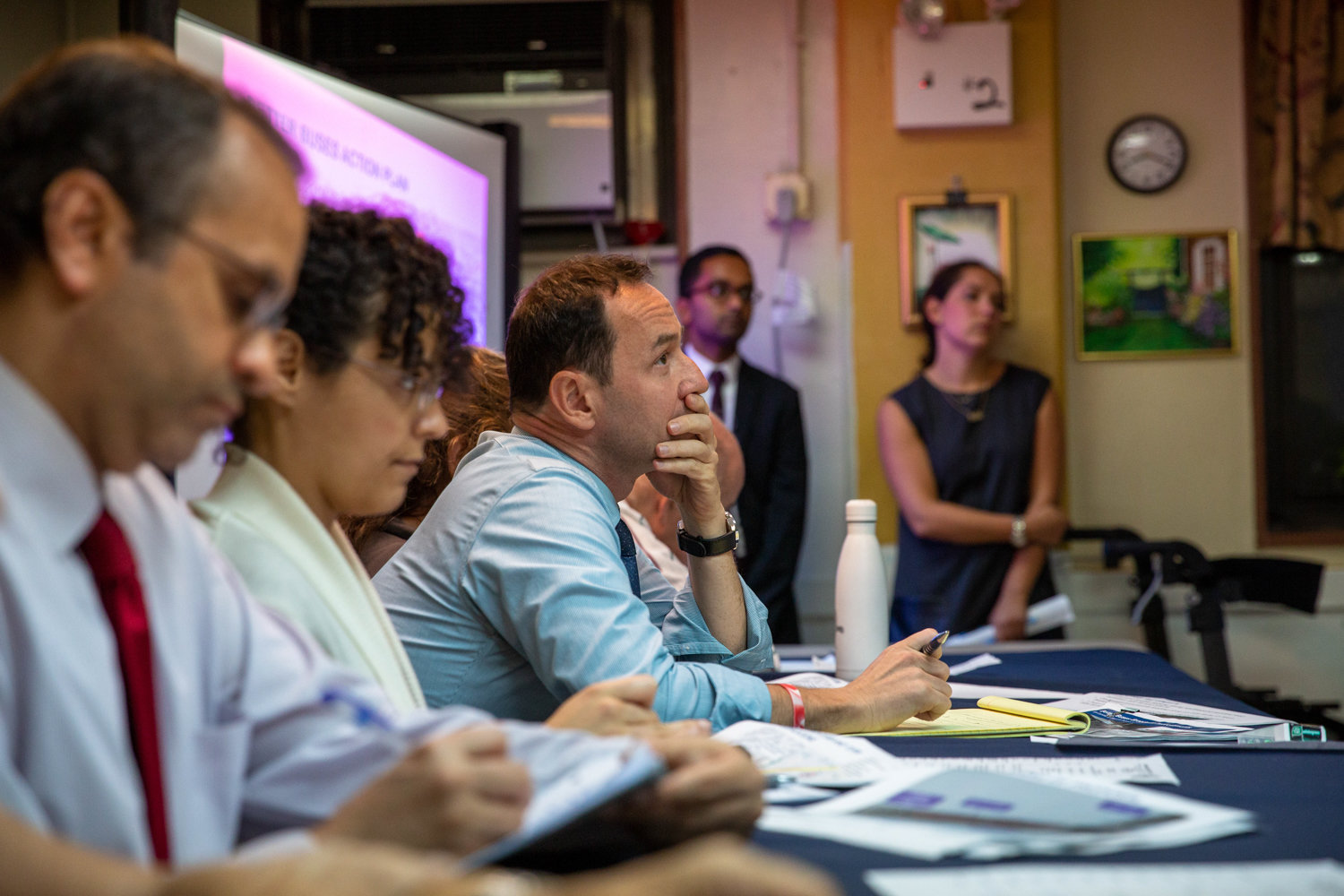 Dan Padernacht, chair of Community Board 8’s traffic and transportation committee, listens to concerns about the city’s transportation department’s plan to install a dedicated bus lane on Broadway between West 225th and West 228th streets.
EIAN KANTOR
Previous Next
By KIRSTYN BRENDLEN

A bus lane on Broadway? At least as far as Community Board 8’s traffic and transportation committee is concerned, that’s probably a great big no.

With a rather full house at the Marble Hill Community Center behind them, the committee unanimously adopted an agreement against a plan that would create a dedicated southbound bus lane on Broadway between West 225th and West 230th streets.

How much that resolution will impact the city’s transportation department and the Metropolitan Transportation Authority’s ultimate plans has yet to be seen. But if the debate over bicycle lanes north on Broadway in 2017 are any indicator, probably not much.

DOT’s Bronx borough commissioner Nivardo Lopez presented the proposal for the CB8 committee Sept. 12, expected to remove a southbound travel lane when the bus restrictions are active, as well as remove some parking just above West 225th for a dedicated truck loading zone. DOT also wants to add a bus-only traffic light in a northbound lane of Broadway, which would ban right turns onto Exterior Street.

To compensate for the lost parking near West 225th, DOT wants to add some two-hour metered parking on West 228th Street.

That’s three blocks away, and removing parking from West 225th could be crippling to business, said Hussein Dalia, who has owned Riverdale Furniture nearby for 21 years.

“If parking is taken from in front of my business, I’m going to have to close my business,” he said.

Dalia does not believe customers will continue to search for parking once they see they can’t park in front of his 5211 Broadway store.

Broadway Deli owner Nagi Mohamed, who operates next to Riverdale Furniture, echoed Dalia’s sentiments. His customers need a place to park while they wait for food. At the same time, delivery drivers who often park or double-park while making pickups, might stop coming to the deli through various online apps not controlled by the deli, meaning Mohamed could lose a critical revenue stream.

Six spots would be removed from Broadway near the two businesses, but it doesn’t mean cars couldn’t still squeeze into the spot, according to committee member Sergio Villaverde. In fact, Villaverde — who also chairs CB8’s economic development committee — asked if DOT might consider implementing the changes gradually to see what works.

“Start with the signal change,” he said, referring to the bus-only traffic light at Exterior. “And expand to more. This is killing flies with sledgehammers.”

The best way to make something like this work however, Lopez said, was to just rip the Band-Aid off immediately. The plans should be implemented all at once, and quickly.

“Ideally with these plans, everything works together,” Lopez said. “We want to expedite this as soon as possible.”

Anthony Del Orbe told the committee he worried about the impact the changes would have on his Marble Hill community, and that DOT should make more of an effort to converse with his neighbors.

“Re-evaluate,” Del Orbe said. “Talk to the people in the community. Talk to the working class.”

The entire study makes little sense to Orlando Kross, owner of Flowers by Zenda at 5217 Broadway, and president of the Marble Hill Merchants Association. He asked the DOT to think about the local businesses.

Kross has other suggestions as well. After the meeting, the Marble Hill businessman told The Riverdale Press he thinks that changing the timing of stoplights on Broadway will help speed traffic along, as they’re too short right now.

That causes traffic backups, and are dangerous for pedestrians who have to run across six lanes of traffic to get across Broadway.

“They should start doing a study from 238th Street to 225th Street,” Kross said. “They should have to drive it because these lights are short. During rush hour, it really backs up. They should do a study of the traffic light and traffic flow.”

Yet, not everyone attending the committee meeting last week were against the bus lane. Jessica Haller, an entrepreneurial consultant and sustainability advocate, says such lanes could really benefit local bus riders.

“The DOT needs to bring the numbers and show us that this is the smart way to do it.”

DOT hasn’t provided a timeline on when it might push a project forward, but the traffic and transportation committee is expected to meet again Oct. 10 to discuss the plan further.