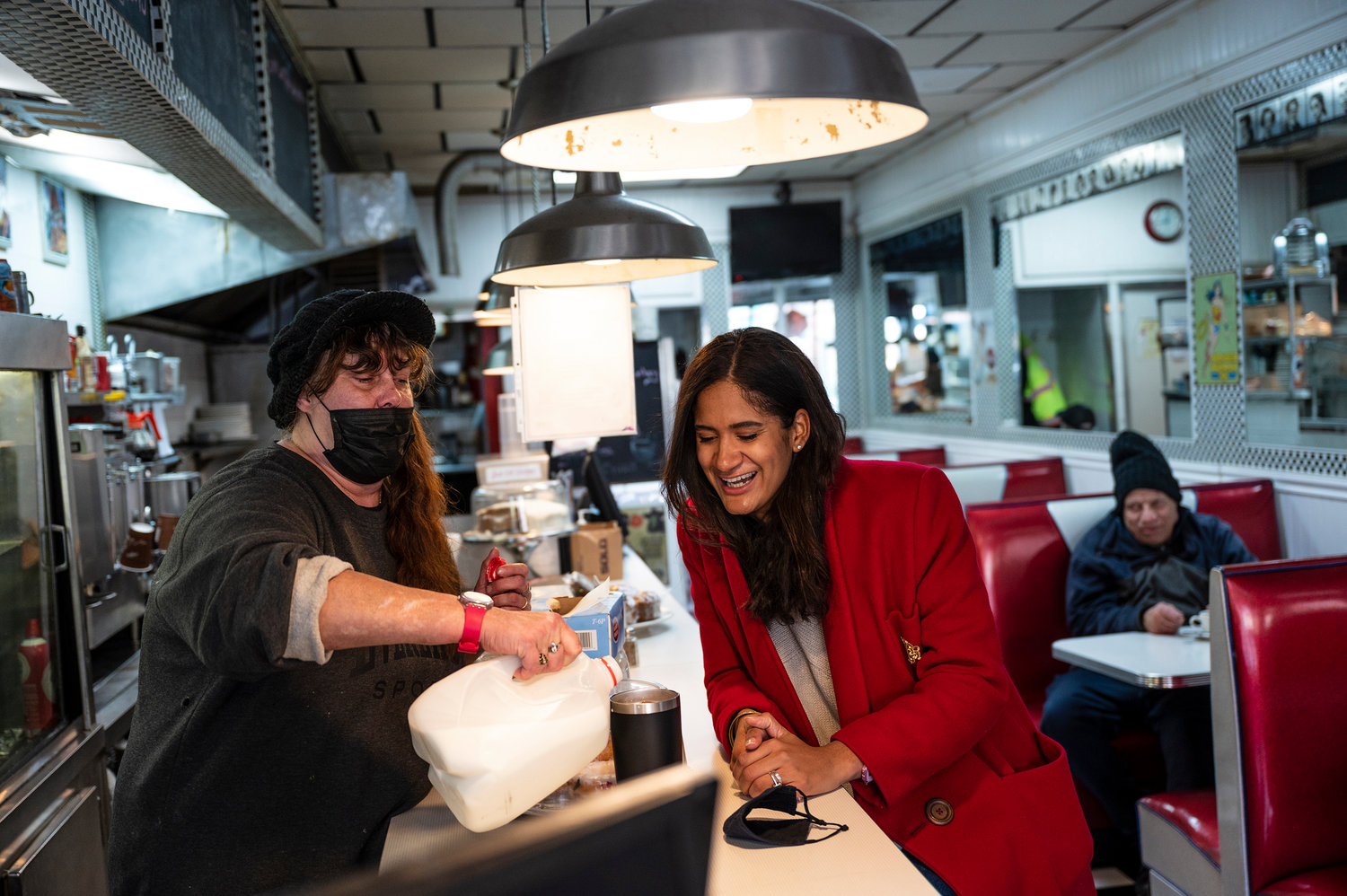 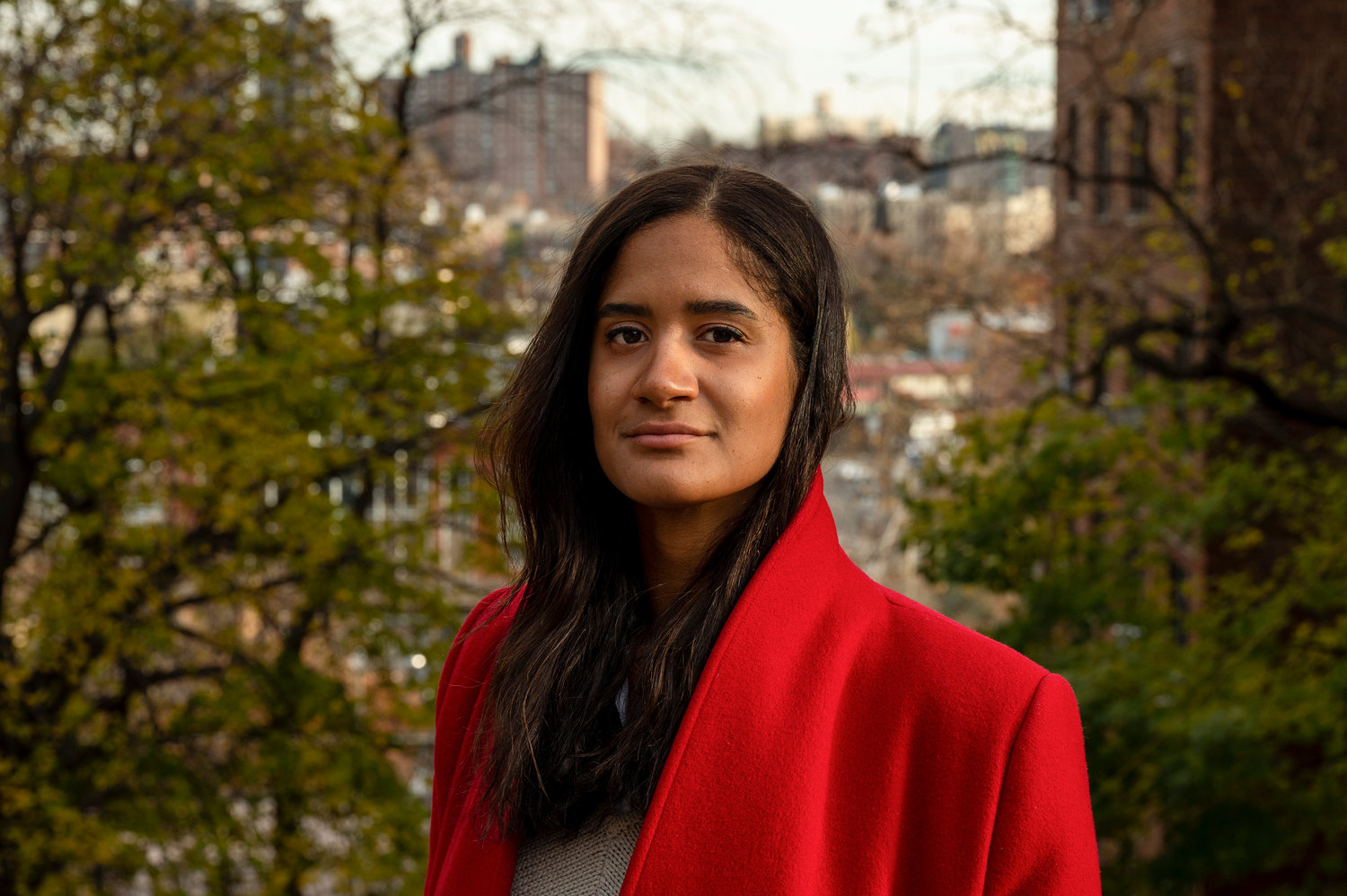 Jessica Woolford, a former New York City press secretary for U.S. Sen. Kirsten Gillibrand, is the first serious primary challenger to Assemblyman Jeffrey Dinowitz in many years. Growing up in Kingsbridge and now living in Riverdale, Woolford says she’s seen the divide between the two neighborhoods firsthand, with hopes of addressing it in Albany.
HIRAM ALEJANDRO DURÃN
Previous Next
By ETHAN STARK-MILLER

While walking around the neighborhood — whether it be to school at P.S. 7, or church at St. John’s — Woolford regularly passed by the two-story house on Kingsbridge Avenue where the local Assemblyman maintains his district office. But in all her years walking by that house as a kid, Woolford says she never once saw the man whose name is on the front lawn sign: Jeffrey Dinowitz.

And now Woolford wants to replace Dinowitz’s name with her own.

“I never knew what happened there,” Woolford said.

“And I never knew who this guy was. But that is such a missed opportunity for kids like me from Kingsbridge. From Norwood. From Wakefield. From Marble Hill. To see themselves in these important seats of power, where important decisions about the day-to-day life of your family — of the people you love and know — are made.”

After growing up and moving to Riverdale, Woolford sees a lot more of Dinowitz now. And at least for her, it exposes one of many divides she says is present even to this day between the neighborhoods of Kingsbridge and Riverdale.

“I remember when I started sixth grade at Riverdale/Kingsbridge Academy, I was like, ‘I didn’t know that there are so many white people in the Bronx,’” Woolford said. “It’s absurd that I grew up so close to so many kids in Riverdale but just had no interactions with them, because we never shared space together.”

It was that divide which inspired Woolford to finally challenge Dinowitz in the 2022 Democratic primary for the Assembly seat he’s held for more than a quarter-century. It makes Woolford the first serious opponent the Albany veteran has faced in many years.

Woolford is no stranger to the world of politics. She’s spent the past decade working on the communications teams of various government offices, labor unions and elected officials. Places like Mayor Bill de Blasio’s immigrant affairs office and the United Food and Commercial Workers International Union.

Most recently, she was the New York City press secretary for U.S. Sen. Kirsten Gillibrand.

The central tenet of Woolford’s campaign is to try to understand every neighborhood’s needs, and then make sure they’re properly represented in Albany’s lower chamber.

“I’m excited to really listen to what the community is asking for, what folks are thinking about,” Woolford said. “The biggest ideas, the small ideas, to make all of our communities feel as though folks are really being taken care of. Not because they’re connected, but because they’re here, and we take care of people when they’re here. So, I think that that vision of leadership is what I’m offering.”

Woolford’s vision was influenced by her grandmother’s many years as a home health care aide in Kingsbridge. Seeing her grandmother take care of the elderly in the community day in and day out gave her a model for helping uphold the dignity of the people who are most vulnerable.

It “inspires me to just think about what’s possible in the place I grew up in and the place where I’m now raising my daughter, where my grandparents are aging,” Woolford said. “And to take a real shot at fixing some of the problems that folks shouldn’t have to be struggling with alone.”

One of the biggest problems Woolford has seen in Kingsbridge and other low-income parts of the Assembly district is hunger. It’s an issue Woolford has tried tackling herself by setting up her own mutual aid group — Kingsbridge Unidos — during the thick of the coronavirus pandemic in 2020. The group’s goal was to deliver fresh produce to her Kingsbridge neighbors who didn’t otherwise have adequate access to them.

Kingsbridge Unidos started by delivering fruits and vegetables from the Hunts Point Produce Market to people in the building where Woolford’s grandmother lives. From there, Woolford grew the organization, leading 10 distributions over the past 18 months, delivering roughly 30,000 pounds of produce.

She expanded the group’s reach over time, delivering to neighboring buildings, and even those living at the Broadway Family Plaza transitional housing facility.

But mutual aid groups alone don’t have enough resources to eradicate hunger in the city, Woolford said. That’s why if she wins the Assembly race, she wants to commit state dollars to growing the food distribution network she’s already started building.

“In one of the wealthiest cities in the world, no one should go hungry here,” Woolford said. “We grow so much food in New York state that we should find ways to incentivize small businesses to really participate in the mutual aid work that’s already happening. So that we can keep building on what we’ve seen as these incredible vehicles to really transform lives to create jobs. But do that at a scale that’s more ambitious, but also possible.”

Another big issue, Woolford said, is getting the state to invest incoming federal money from the infrastructure package President Joe Biden signed into law late last year to fix what she described as a decaying and inaccessible transportation network.

Like the Kingsbridge stretch of the Major Deegan Expressway that flooded this past September when the remnants of Hurricane Ida hit the city. And the lack of wheelchair-accessible subway stations.

“The fact that we have just one elevator on the 1 train across all of these train stations from (West) 242nd to (West) 225th is outrageous” Woolford said. “And so, this is a question about really figuring out, like, what are our priorities when we’re talking about accessibility and equity?”

While the omicron variant creates obstacles to campaigning in person, Woolford said her goal over the next few months is to speak with as many people in the district as possible.

“So that I can really understand, ‘What does a responsive legislative vision for the 81st District look like?’” Woolford said. “And do we truly have community buy in? In the ways that we’re imagining the future, responding to the crises of the moment, and planning something that can be great for everyone.”