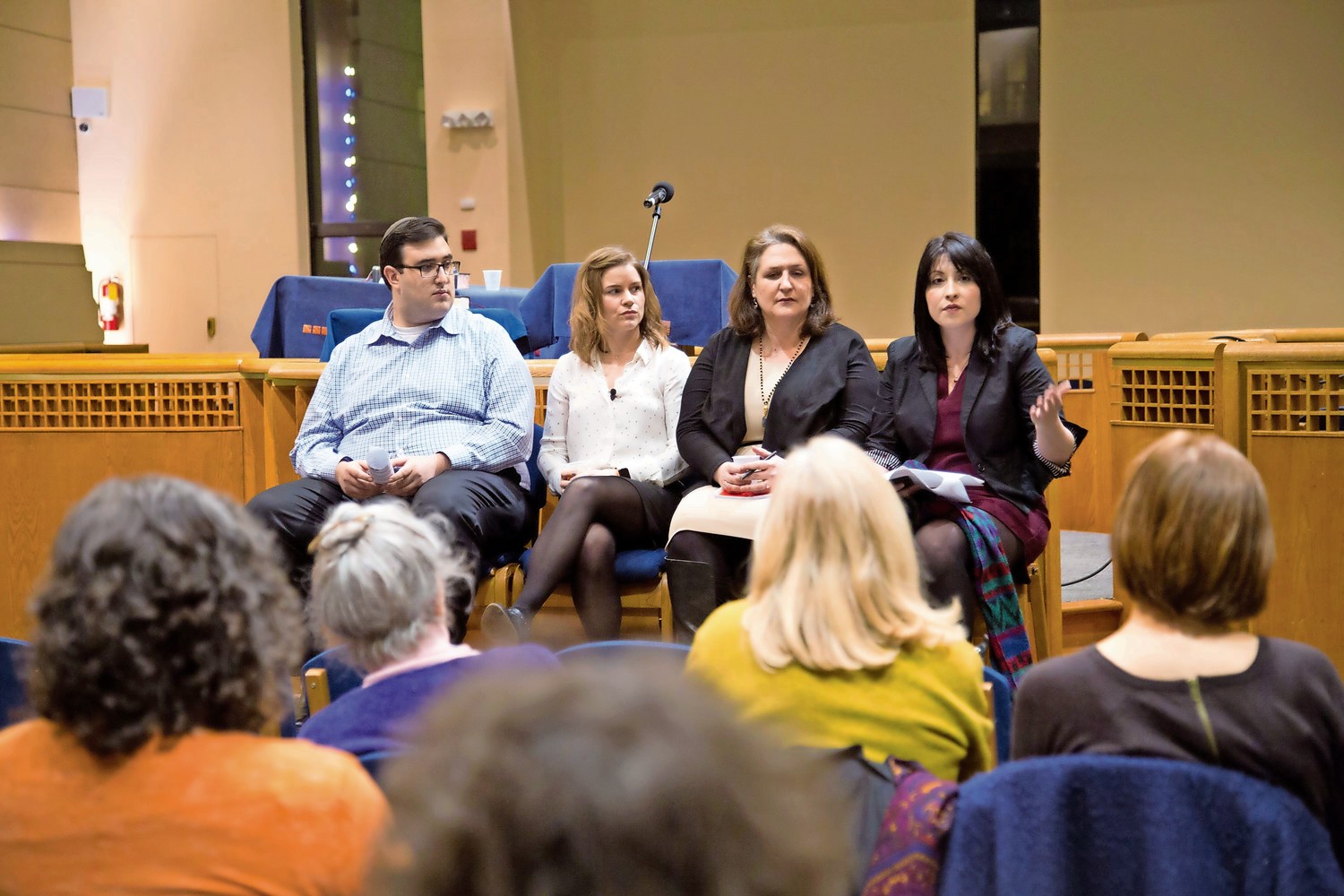 Lauren Schuster, the chief of staff for assemblywoman Linda B. Rosenthal, speaks about the importance of passing the Child Victims Act at a panel discussion at the Hebrew Institute of Riverdale.
MASAO KATAGAMI 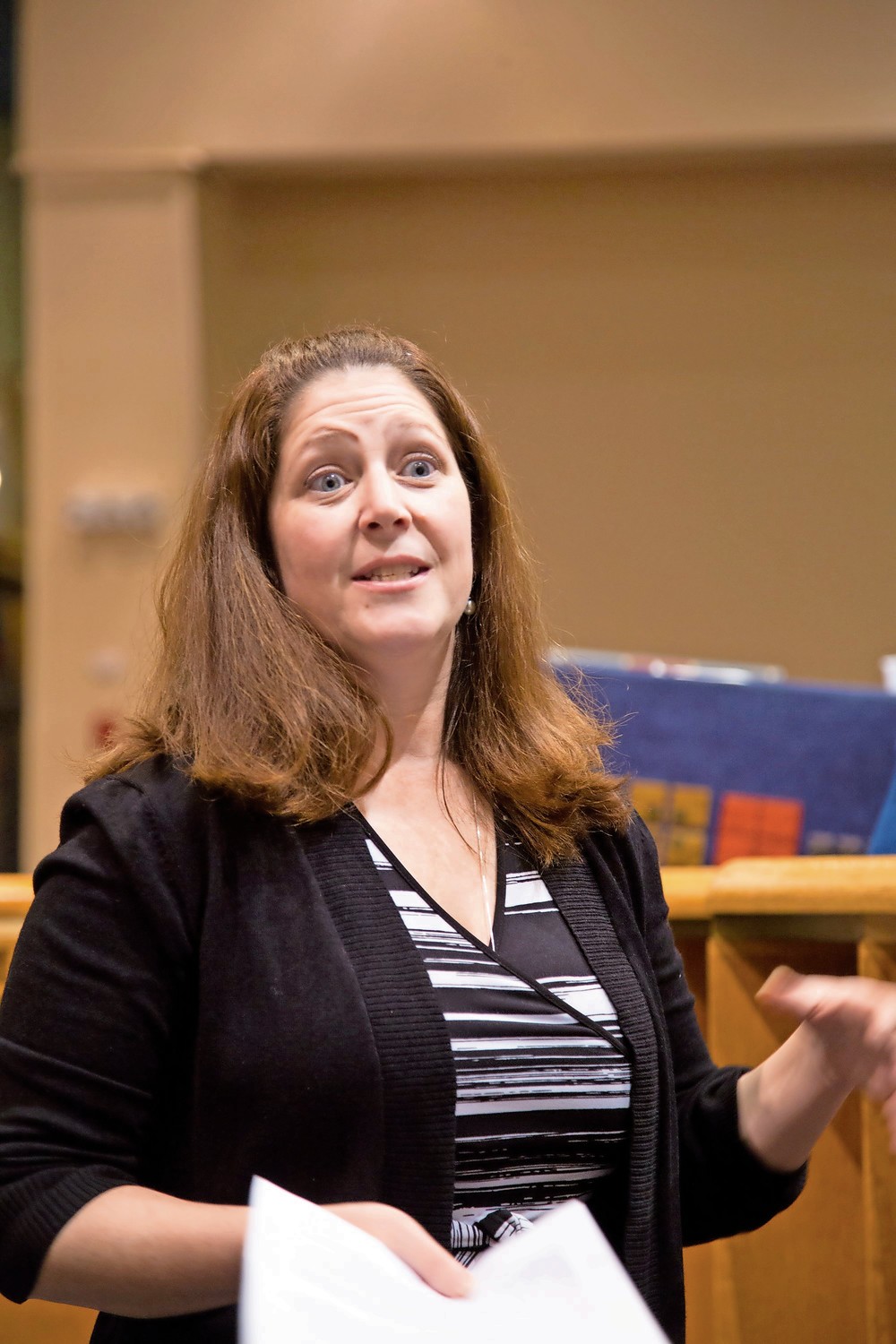 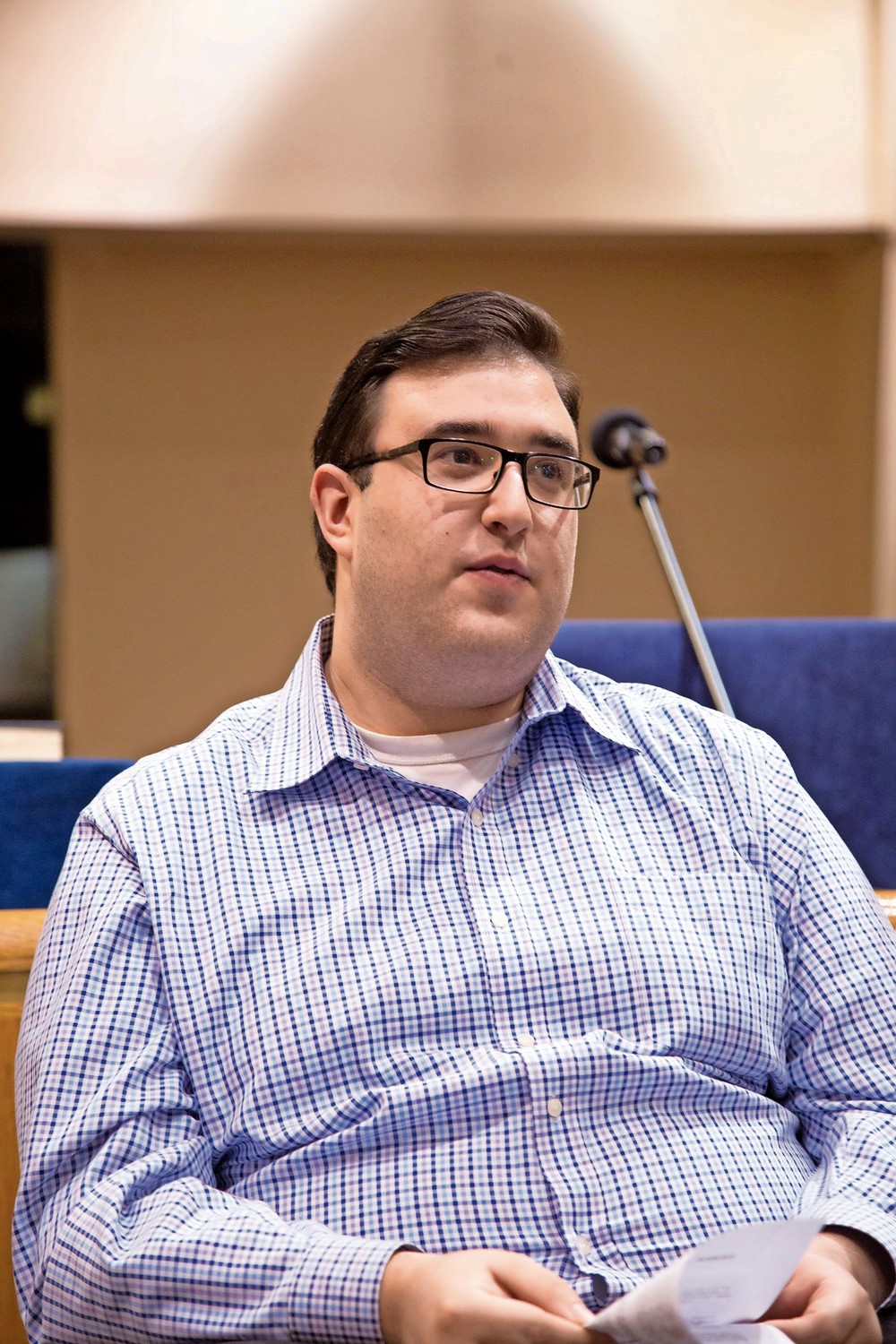 Asher Lovy talked about the abuse he suffered from as a child during a panel discussion at the Hebrew Institute of Riverdale. Lovy is the director of community organizing for Zaakah, a non-profit helps abused children in ultra Orthodox community
MASAO KATAGAMI 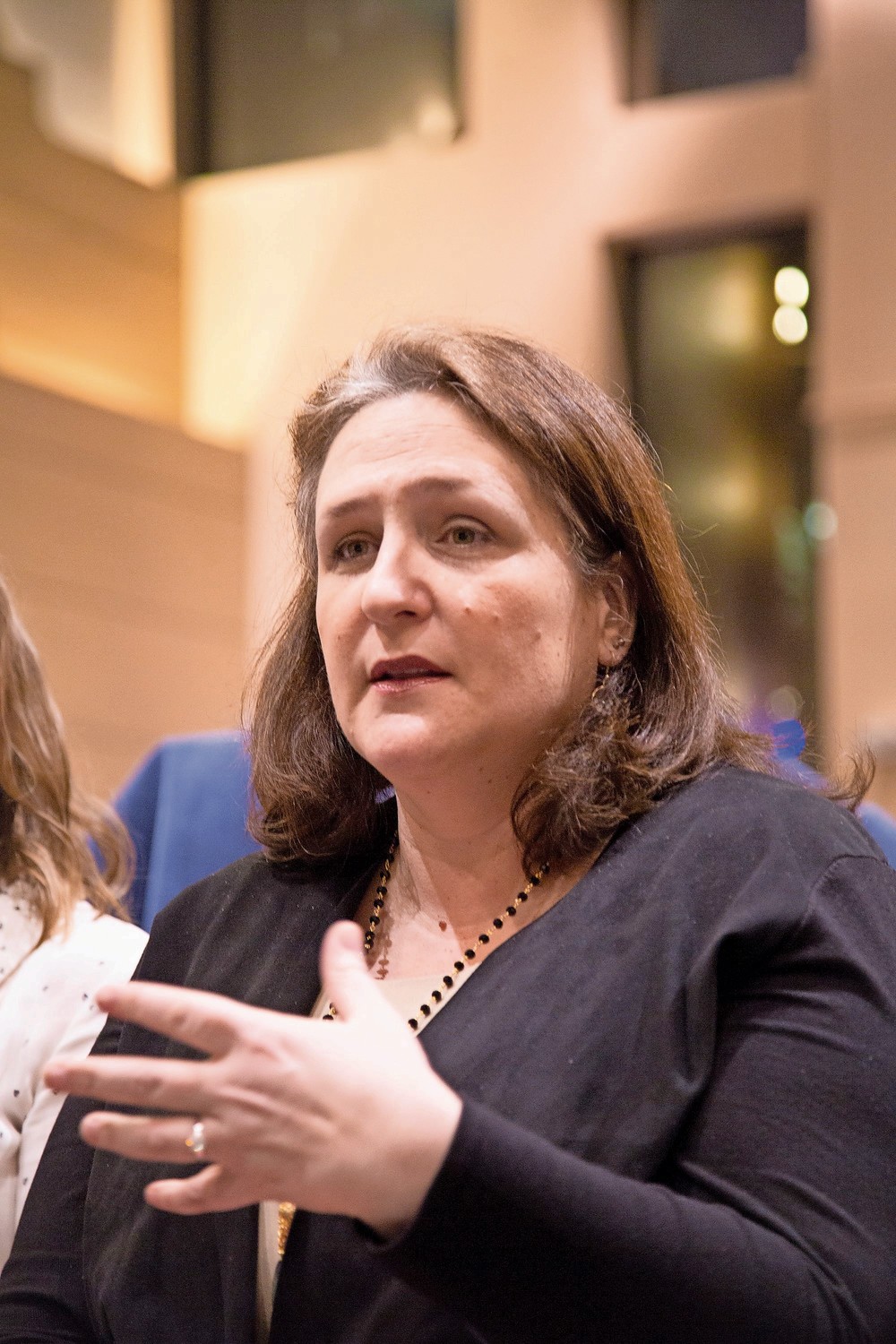 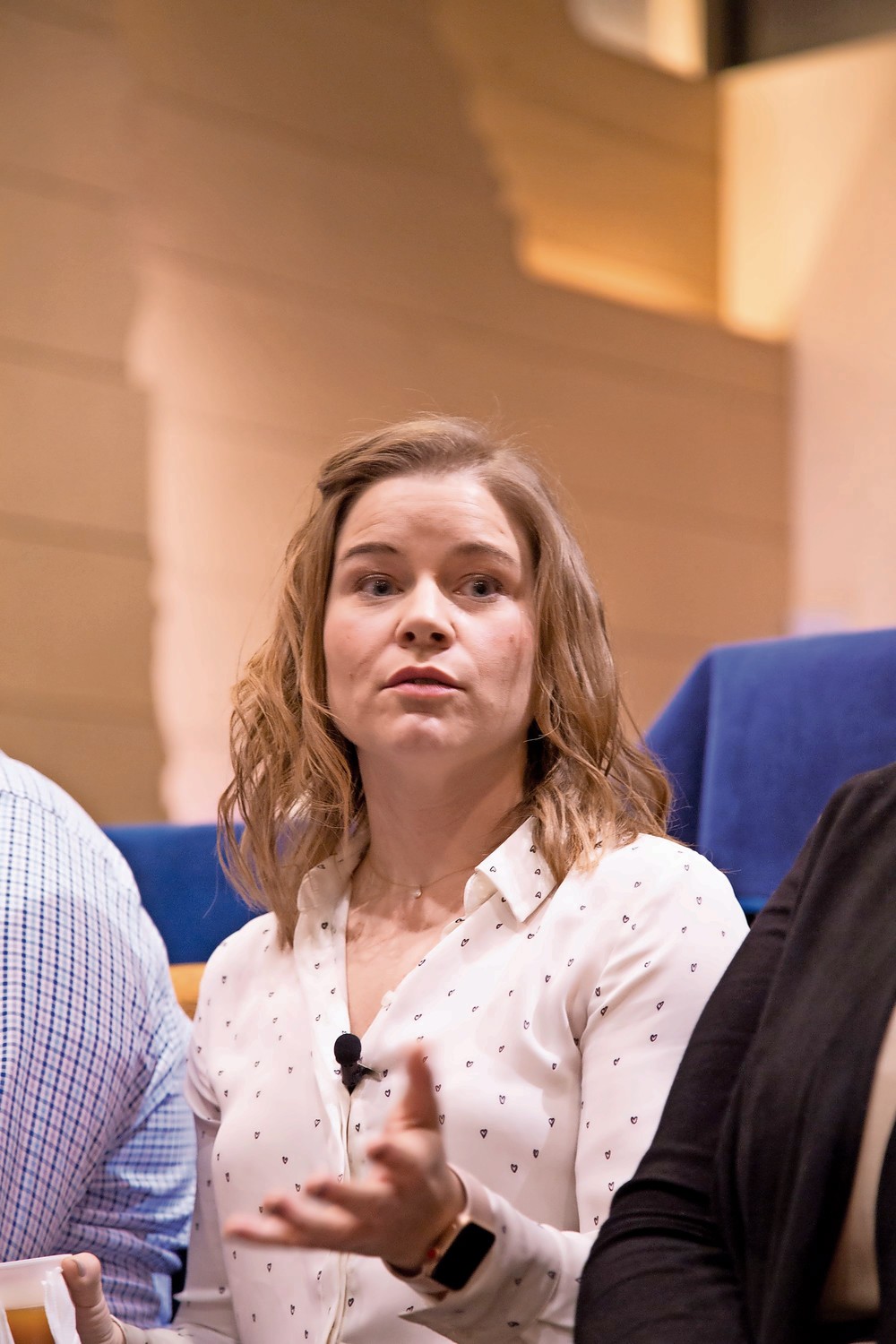 Bridie Farrell, a former speedskater, talked about her experiences of abuse as a teenager. She is the chief executive officer of the non-profit NY Loves Kids, which helps child victims of sexual abuse.
MASAO KATAGAMI
Previous Next
By SIMONE JOHNSON

Six years ago, the Hebrew Institute of Riverdale found itself caught up in a scandal involving a former part-time youth director.

Evan Zauder, who had moved on at that point to a Jewish school in New Jersey, was arrested for possessing and distributing child pornography. A judge would ultimately sentence him to 13 years in a federal prison, but that and other higher-profile child abuse cases continue to shake the Riverdale community. So when HIR’s senior rabbi Steven Exler was given the opportunity to participate in a panel designed to empower the young victims of such crime, he jumped at the chance.

“Religious institutions have often found themselves on the wrong side of child abuse and have participated in protecting abusers instead of protecting the child,” Exler said.

Last month’s panel brought a number of people together, including those who not only are survivors of abuse, but work full-time to prevent more people from ending up like them.

One of those survivors was Asher Lovy, now a community organization director at Zaakah, a child abuse law reform advocacy group focused on the ultra-Orthodox Jewish community. When he sits down to talk to victims looking to prosecute their alleged abusers, he always has one question he has to ask first.

These victims are primarily adults now, reflecting back on crimes taking place when they were children. But too many of them are powerless in the courts because they are simply too old. When victims reach 23, New York law says their abuser can no longer be held criminally accountable for what they’re accused of.

“We believe you, and we have a case, but we can’t do anything about it because they’re 23,” said Rachel Ferrari, chief of child abuse in the sex crimes bureau of the Bronx district attorney’s office.

But there is something that could change that: the Child Victims Act. And it’s that act that prompted the Jewish Orthodox Feminist Alliance to sponsor the conference at HIR. If the act can make it to Gov. Cuomo’s desk, supporters say it could significantly extend the timeframe a victim has to bring a case against their abuser.

State law “actively protects abusers that beat the clock, and the Child Victims Act would change everything,” said Lauren Schuster, the chief of staff for Assemblywoman Linda Rosenthal, who is sponsoring the bill in the lower chamber that would extend the statute of limitations up to a victim’s 28th birthday.

“Children do not have the choice to stop sexual abuse when it happens, and neither when they’re adults,” Schuster said. “So many of us are working toward a better future. But here are people walking around hurting children because they know our laws are weak.”

Jessica Schafroth Barry, a government relations assistant at the Malkin & Ross law firm, was molested as a child by someone who had lived in her community. When she turned 13, he began writing her letters from prison, confessing what he had done to her and other children. Yet, years later, he was released from prison and moved right back into the same neighborhood.

“The next day I called the DA and was like, ‘Here’s the proof,’” Barry said. But her abuser had “beat the clock,” and would face no legal consequences.

The act is important because many victims take decades to recognize what happened to them, and that it was wrong, said Sharon Weiss-Greenberg, executive director of the feminist alliance.

“Until I was 19, I believed that the only person that was doing something wrong was me,” Lovy said. “I come to panels, I scream into bullhorns, I tell people that it isn’t their fault. But some small part of me inside still believes that it is my fault.”

Bridie Farrell was in college when she realized what had happened to her was more than “stealing your brother’s candy”-wrong, as she put it. When Farrell was 15, she says her 33-year-old speedskating teammate, Andrew Gabel, sexually abused her.

While the abuse did eventually stop, and Gabel resigned from the International Skating Union and U.S. Speedskating after the allegations came to light.

“And people are like, ‘Why didn’t you go tell anyone after he stopped skating?’” Farrell said.

But in this case, like many, power dynamics can hinder victims from speaking out.

The Child Victims Act has made it through the Assembly a number of times, but it can never get past the Republican-controlled senate. There, some senators have expressed fear the number of cases flooding the court would bankrupt them, Barry said.

Local senator Jeffrey Klein is a co-sponsor of the bill — and a spokesman for his office proclaimed Klein supports the Child Victims Act. Yet, Klein leads the Independent Democratic Conference, a small group of senate Democrats who broke away from their party and allied themselves with Republicans, allowing the GOP to run the show in the upper chamber.

Finding their way into adulthood is still not enough for many child victims, and the act could provide some hope. Farrell said just recently she broke down after learning the only doctors available on her new health insurance were male. She is still learning to trust again.

What would help is if she can prosecute alleged abusers, and that can only happen if the Child Victims Act finally passes.

“It won’t be as hard as what I’ve been through,” Farrell said. “If I have to go through that to protect one other kid — just one — from going through this, it’s worth it to me.

“Protecting these girls is why I rip the Band-Aid off every day.”