GREAT VIEWS, BUT LITTLE ELSE

Years of issues pile up, but some tenants say super won't do much about it 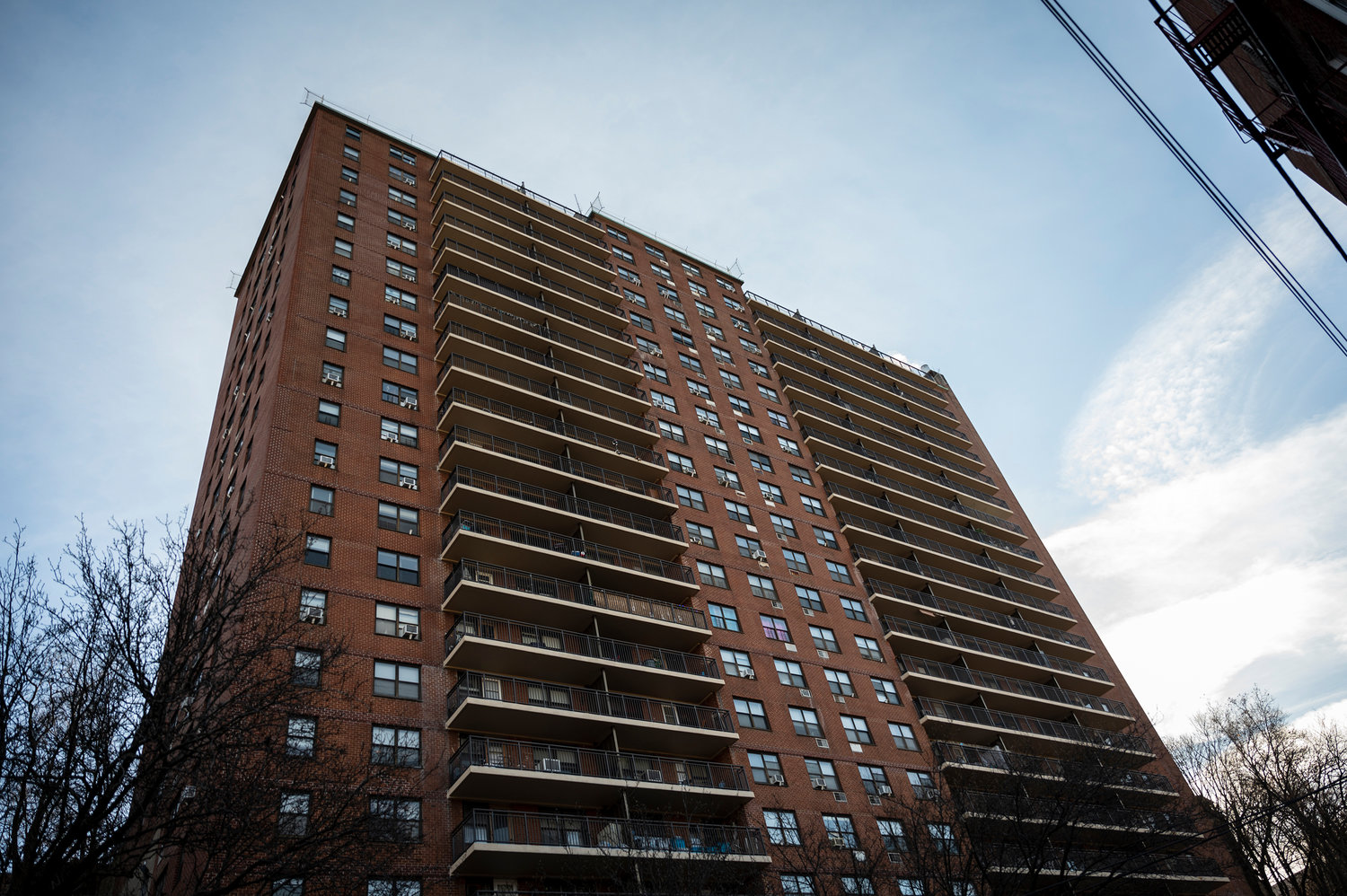 Tenants at 3400 Fort Independence St., say the building is in dire need of repairs. The property has racked up years of violations from both the city’s buildings and housing and preservation departments, but repairs still haven’t been made. Some of the violations include structural damage that’s cracking the building’s façade.
HIRAM ALEJANDRO DURÁN 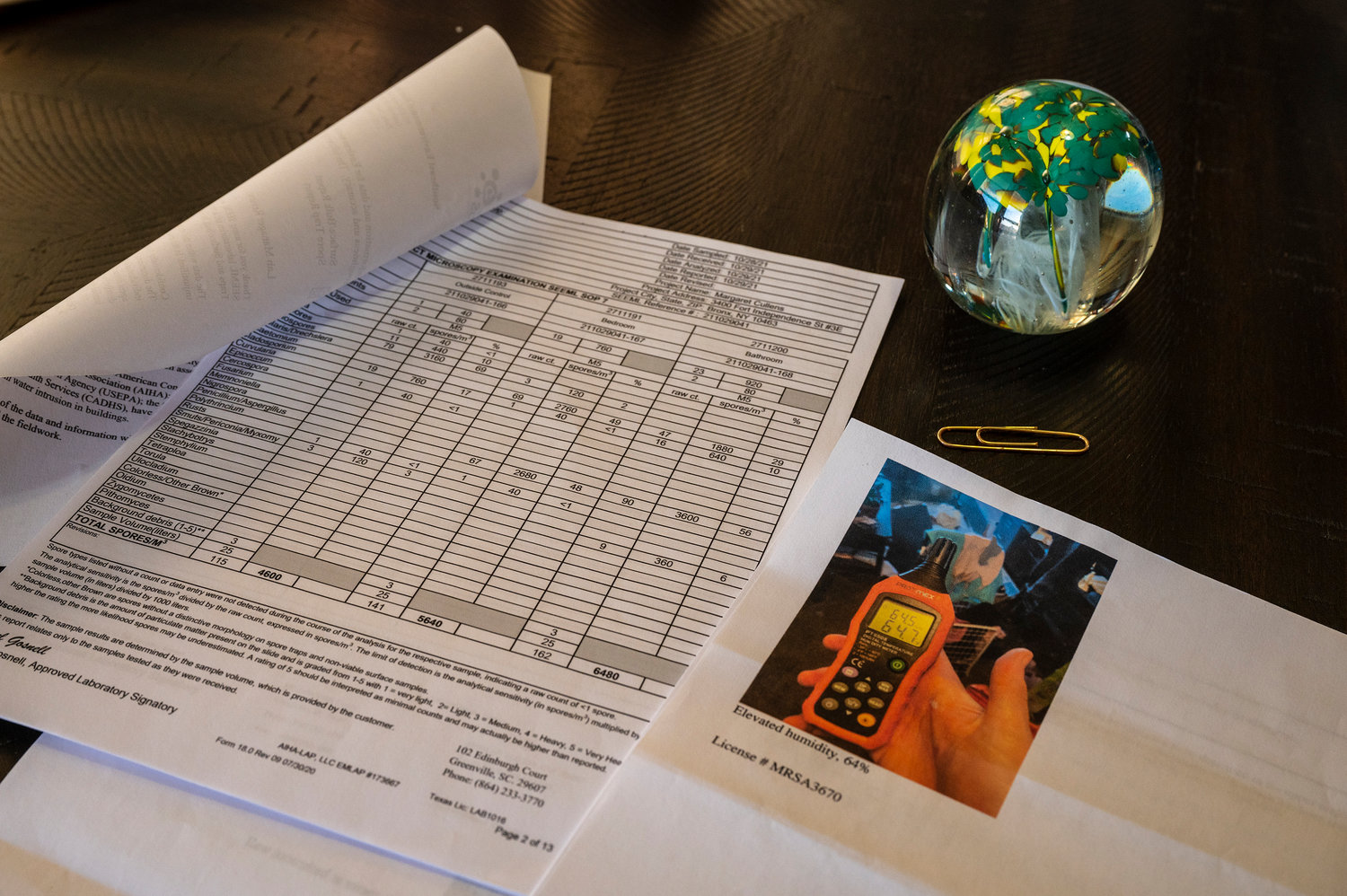 For six months, Margaret Cullen has tried to repair the bathroom in her 3400 Fort Independence St., co-op — a bathroom she says has confirmed a mold infestation.
HIRAM ALEJANDRO DURÁN 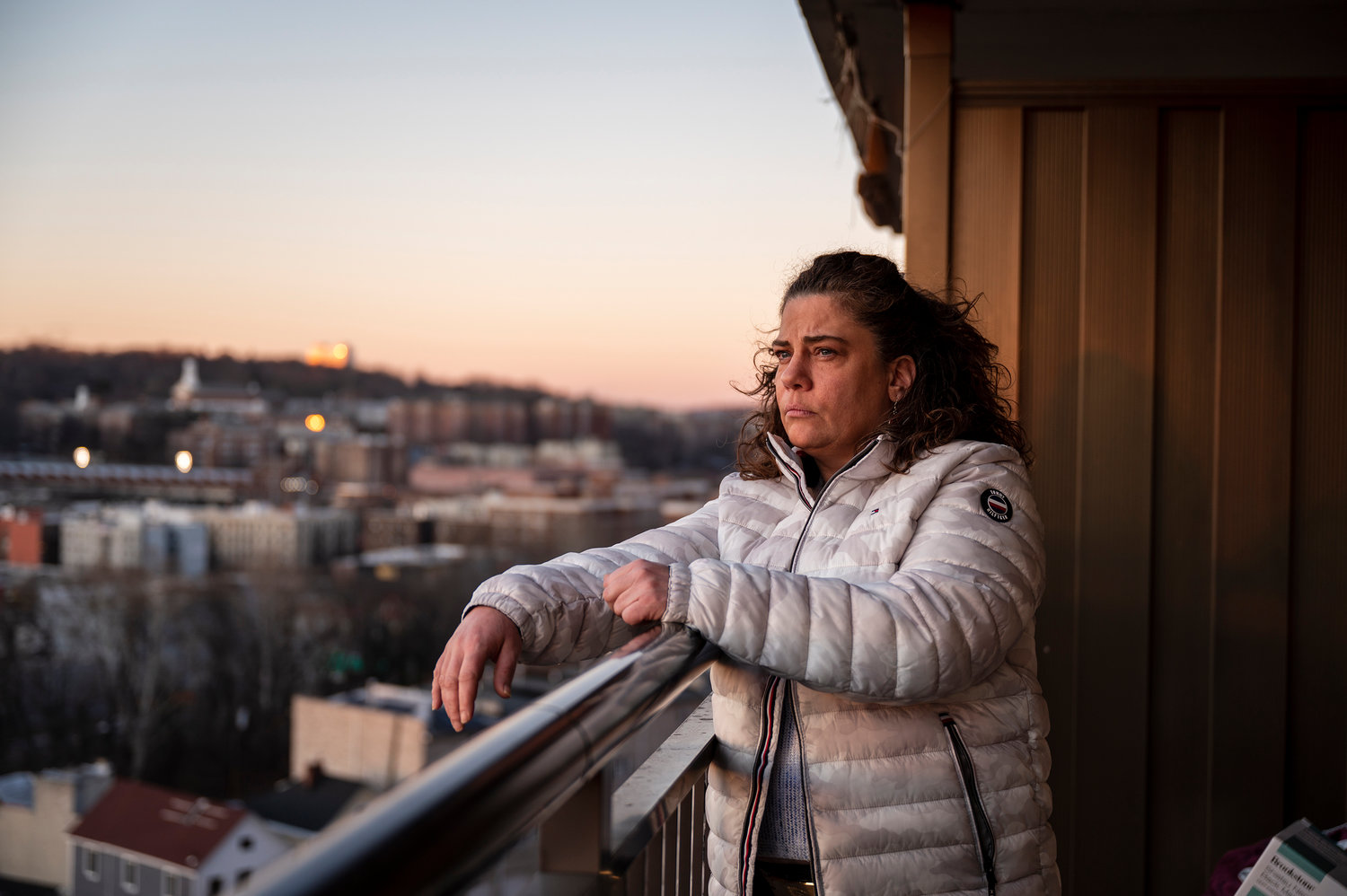 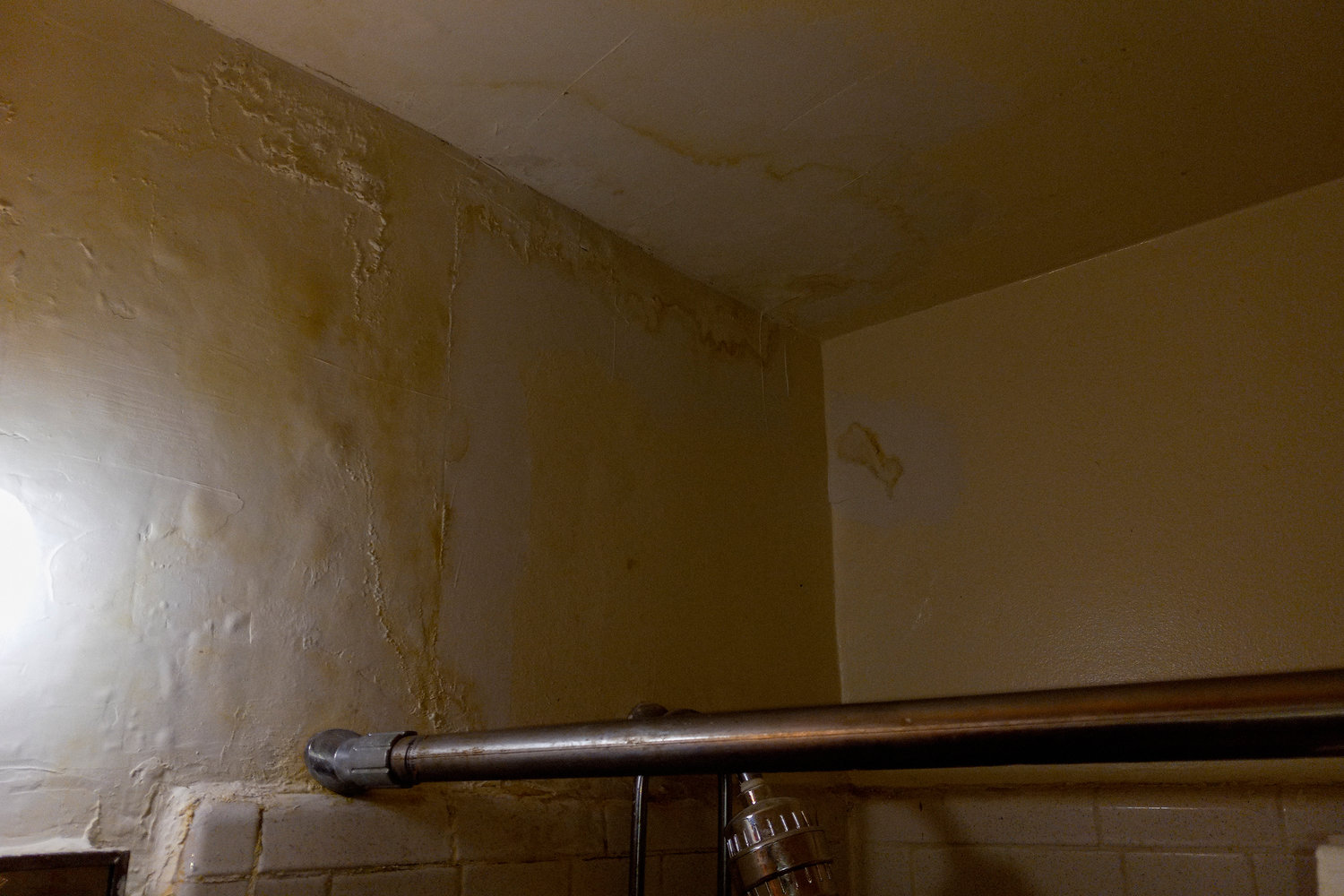 Margaret Cullen says it’s impossible not to see the water damage and mildew throughout the bathroom in her 3400 Fort Independence St., co-op — caused by several leaks and floods. Her building has received several violations from the city, but Cullen says nothing has been done to rectify the damages.
Courtesy of Margaret Cullen
Previous Next

They turn the water back on and then shut it off every time another pipe breaks. They are breaking all over the building.”
MARGARET CULLEN
Support journalism

Home may be where the heart is. But for Margaret Cullen, home has just been a headache.

That home is a Mitchell-Lama program co-op unit at 3400 Fort Independence St., where Cullen has been at what seems like a never-ending war with water. It’s a series of battles that have victimized her floors and her bathroom. And for the last six months, she’s waited for something — anything — to be done to address it.

She spends a lot of time thinking about the door to her balcony, for example. It’s not fitted properly, Cullen says, which allows water to seep in during bad weather.

“Because of the spacing between the bottom and the floor, you could still feel the draft in the apartment when it gets really cold,” Cullen said. “The entire door needs to be replaced. Look at this building. Everything here has shoddy work. It’s ridiculous.”

It’s not that no one is paying attention. In fact, officials from the city’s housing and preservation department have become regular visitors, and pointed out a problem with not just Cullen’s balcony door, but doors on three floors.

Yet, that’s not all the issues, Cullen said, but just the tip of the iceberg.

“There (are) problems with this building, and they’re all over,” she said. “My insurance company told me there was water damage throughout parts of the apartment. There was soaked water from over (the balcony entrance way) all the way to” the living room.

Some apartments have gone days without water.

“They turn the water back on and then shut it off every time another pipe breaks,” Cullen said. “They are breaking all over the building, all the time.”

But when there is water, Cullen says her bathroom pipes leak behind the walls. It’s a problem that she’s been dealing with since August. Samples taken from her bathroom shows Cullen has a serious — and potentially dangerous — mold problem.

For six months, Margaret Cullen has tried to repair the bathroom in her 3400 Fort Independence St., co-op — a bathroom she says has confirmed a …

“I’ve got mold growing from behind my walls, which was tested by a lab,” Cullen said. “My son and I have both suffered reactions from this. His doctor even believes he’s developed asthma from this.”

Additionally, Cullen’s toilet has overflowed several times. Yet she says nothing has been done to fix it.

“My son went to use the bathroom in the middle of the night once and it overflowed,” Cullen said. “All he did was urinate. There’s always a problem with the toilet. (The) stuff that comes up from there, oh my God, it’s disgusting. I don’t know what it is. And it smells.”

The Kingsbridge Heights co-op is part of the state’s Mitchell-Lama program. Named for state Sen. MacNeil Mitchell and Assemblyman Alfred Lama, who authored the bill creating the housing program in the mid-1950s, it’s intended to maintain affordable housing options for middle-income families.

The program was crafted to include co-ops and rentals, but mostly promoted outright home ownership. Those buying into a Mitchell-Lama community are required to undergo an annual income audit to ensure they meet the financial requirements to remain there.

Cannon Heights, as the Fort Independence building is called, provides tenants with some of the most extraordinary views in the area, overlooking the Jerome Park Reservoir with a clear wide shot of the city skyline.

But Cullen says that’s about as good as it gets. The problems unfortunately have overshadowed the views and the spacious two-bedroom co-op the family of three has lived in for more than four years.

“We have pipes breaking,” Cullen said. “Cracks along the side of the building. Balconies we can’t even use because of the safety issues.”

With conditions worsening, Cullen has hired a lawyer and is taking her co-op board to court. The management company did not respond to repeated requests for comment.

Sidewalks that never see the sun

In case tenants needed a reminder about the issues plaguing Cannon Heights, sidewalk shed surrounds the building — something Cullen says has been there for more than a decade.

“It still just stands there with nothing,” Cullen said. “There have been times during heavy storms where it would shake, and even pieces of it would fly off. It’s been there since before I moved in here.”

But even if the co-op board wanted to remove the sidewalk shed, it couldn’t. Removing it would be dangerous, according to buildings department spokesman Ryan Degan.

“Engineering reports submitted to DOB in 2013 and 2018 indicate that the façade is in an unsafe condition and poses a potential hazard to the public,” he said.

The later report found multiple cracks in the façade, which then absorbs moisture, pulling that dampness into the building.

“The landlords will continue to face additional enforcement actions until such time as the owner makes the required façade repairs,” he added.

In the wake of the fatal apartment building fire in Fordham Heights last month, and the collapse of a condominium building in Florida last year, Cullen believes it’s more important than ever to get these repairs done.

“It was so devastating to watch what happened to the people in (those) buildings,” she said. “We should be thinking about that when we consider the conditions of our own building.”

Cullen isn’t alone in dealing with some of these issues. Josie Tavarez, who once sat on the building’s co-op board, also has her own qualms. For starters, the building’s super has been unreliable, she claims — especially when dealing with emergency situations like a recent gas leak. The super denied there was a leak, but Tavarez says Con Edison and the fire department say otherwise.

“Who am I going to believe?” she asked.

And then a major storm flooded her apartment, and she’s still waiting for repairs.

“The relationship with the shareholders and the super is really ugly,” Tavarez said.

The city’s housing and preservation department received several complaints about water in the building, according to records, even issuing a half-dozen or so  violations. But outside of that, both Cullen and Tavarez say the city agency has been mostly silent.

But Jeremy House, a spokesman for the agency, tells The Riverdale Press housing and preservation “responds to all complaints filed as quickly as possible.”

“We attempt to notify the landlord of the complaint,” he said, “and we attempt to confirm with tenants if the condition has been corrected before sending an inspector.”

But neither Tavarez nor Cullen believe the agency has been helpful. Nor has it held the management company accountable.

“It’s such a shame because this building was once the best place in the borough to live in,” Cullen said.

“It would be great to see something actually get done around here.