Community board calls for permanent, not transitional, housing here 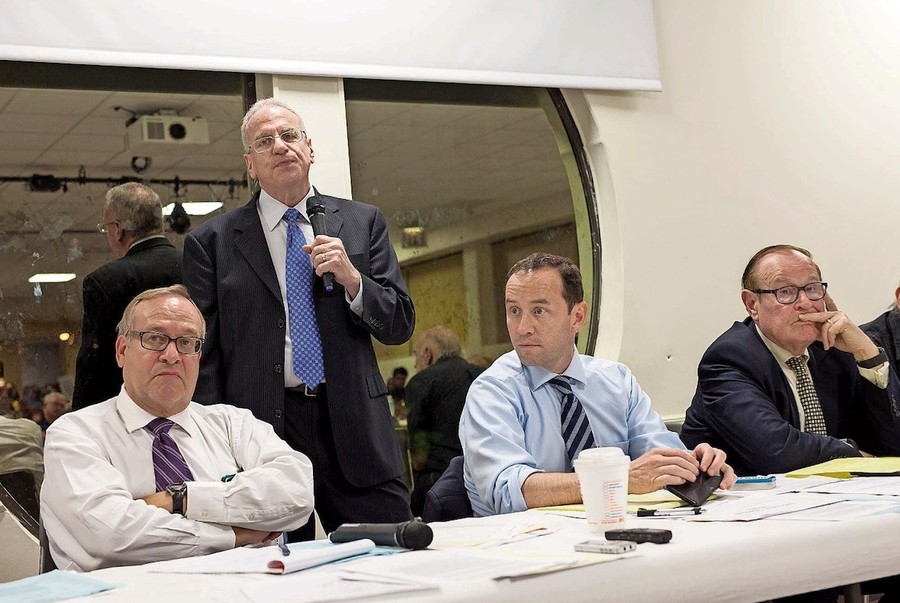 Assemblyman Jeffrey Dinowitz speaks to Community Board 8 members against the creation of a homeless shelter in a recently constructed apartment building at 5731 Broadway.
Liz Sanders 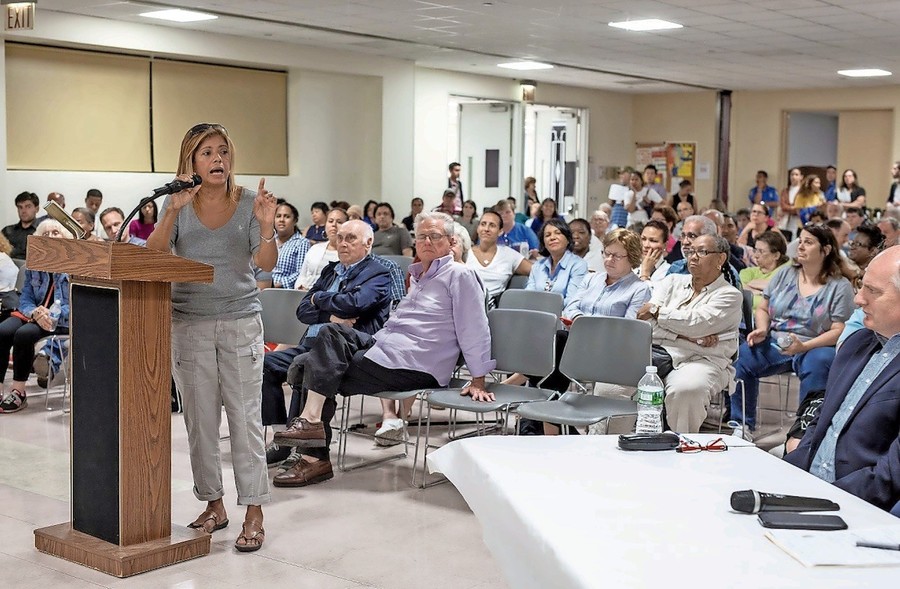 Carmen Cruz tells Community Board 8 members about her home, adjacent to the new homeless shelter planned in a newly constructed apartment building at 5731 Broadway.
Liz Sanders 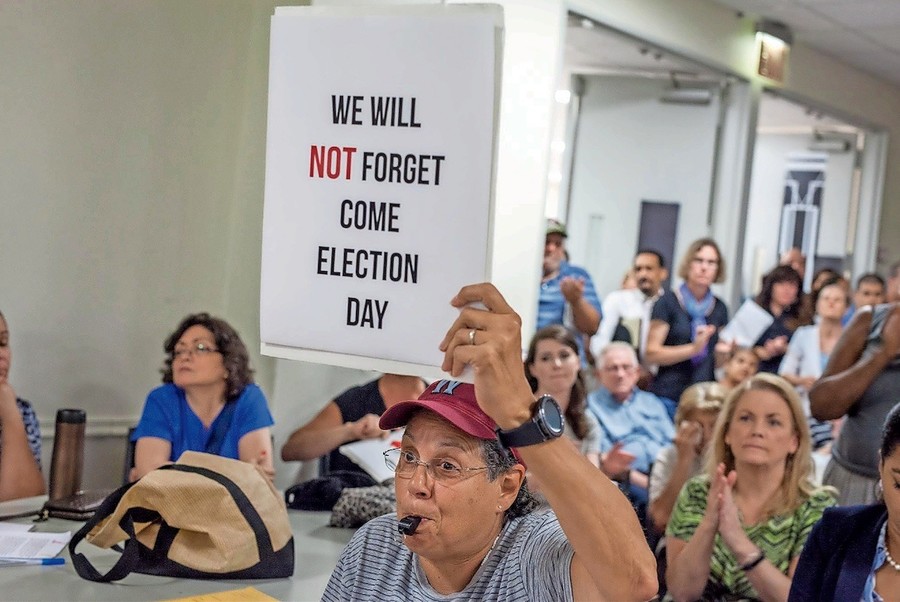 Roxann Moraza blows a whistle while holding up a sign to show her opposition to the placement of a new homeless shelter a recently constructed apartment building at 5731 Broadway. Some community members like Moraza say the shelter was planned without community involvement.
Liz Sanders 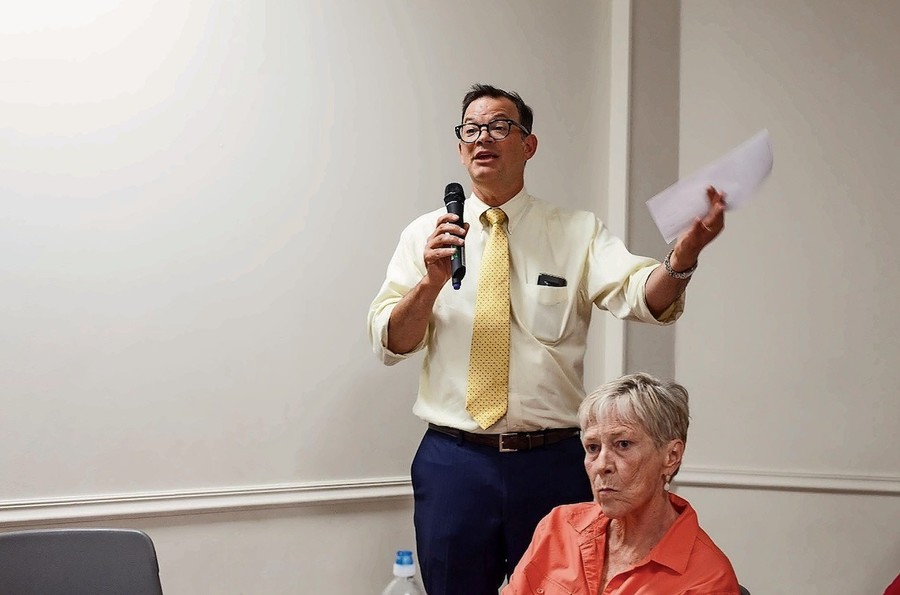 Councilman Andrew Cohen speaks to Community Board 8 members against the creation of a homeless shelter in a recently constructed apartment building at 5731 Broadway. Some community members say the shelter was planned without community involvement.
Liz Sanders 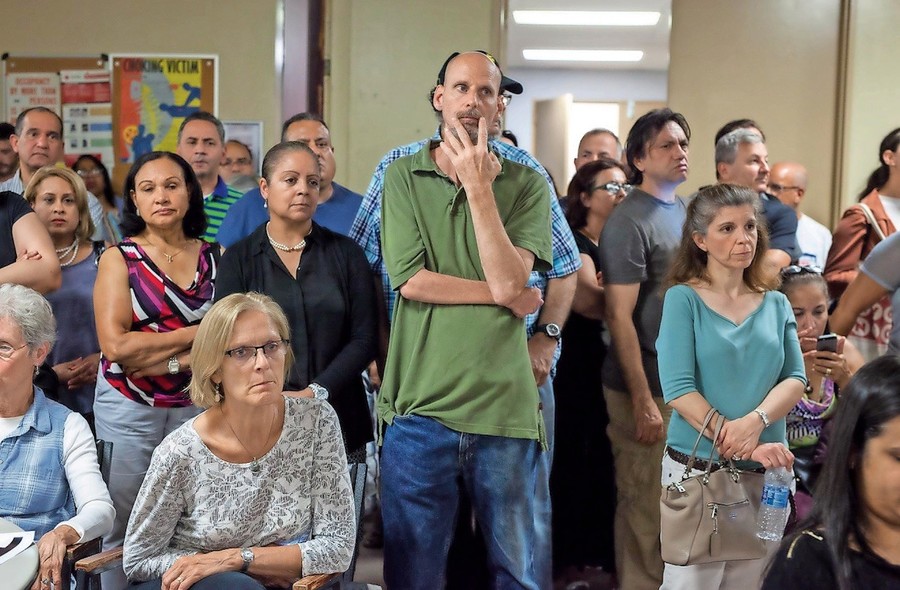 Bronx community members filled up a meeting room in The Riverdale Y to oppose a new homeless shelter being placed in a recently constructed apartment building at 5731 Broadway. Some community members say the shelter was planned without community involvement.
Liz Sanders 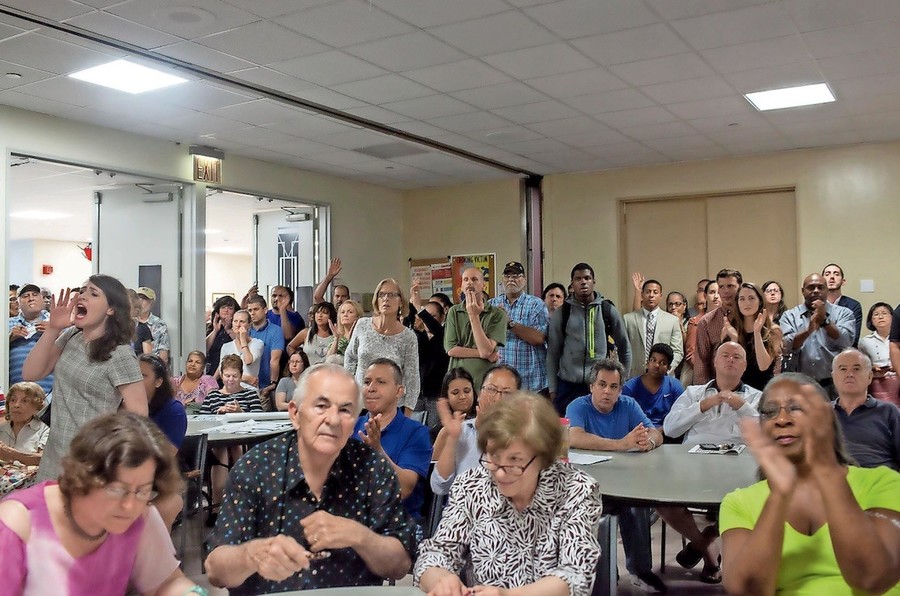 Bronx community members filled up a meeting room in The Riverdale Y to oppose a new homeless shelter being placed in a recently constructed apartment building at 5731 Broadway. Some community members say the shelter was planned without community involvement.
Liz Sanders
Previous Next
By Michael Hinman

The homeless plight affecting New York is a personal one for Rachel Rosenberger. But probably not as many might think.

“I am going to give you a date,” Rosenberger told members of Community Board 8 — meeting as the land use committee — last week. “Jan. 4, 2016. Does that date mean anything to you? That means something to me.”

On that day, 28-year-old Adam Garcia died after a customer fatally stabbed him in the parking lot of the Broadway McDonald’s in Kingsbridge. Garcia was the night manager. The man who was eventually charged with the murder was Rafael Gonzalez, who police described as homeless.

So when Rosenberger hears about plans to open homeless transitional housing for families at a new apartment building just blocks away at 5731 Broadway, she’s livid.

The city’s homeless services department announced in mid-July plans to convert the 83-unit apartment building into housing for a number of families that, until they hit hard times, listed Riverdale or Kingsbridge as their permanent address. Taking over an entire building is part of Mayor Bill de Blasio’s overhaul of the city’s homeless programs, eliminating so-called “scatter sites,” and instead centralizing those looking to regain their independence by better providing services like security and social programs.

It also means trying to get people back into the communities they came from. For example, the city is working with nearly 360 people who before their tough times called the CB8 area their home, said Jackie Bray, first deputy commissioner for city’s homeless department.

“When they are homeless, it’s not just about losing their home,” she said. “It’s also about being uprooted in order to be sheltered somewhere else. You can imagine being a young kid going to school, and if your family loses their home, then you have to move to a new school district.

CB8 members, including land use committee chair Charles Moerdler, expressed deep concern the city was taking the wrong approach with the transitional shelter. Instead, Moerdler said, 5731 Broadway should be turned into permanent housing for the homeless.

“The difference between permanent and transitional, as DHS will tell you in greater detail I’m sure, is that one of them you’re in and you’re out. That is transitional,” Moerdler said. “I do not know whether they have a timeframe for how long they’re there, but in permanent, they are people who are in a place like any other tenant, and they are there for a period of time that is fixed, so they can regain their roots.”

The average stay for a family in transitional housing, however, is about a year, Bray said — similar to a rental lease. Families are carefully chosen for the program, and the facility itself is staffed with 32 people, including both social workers and security.

A late change of plan

Concerns, however, were not just about the fact this transitional facility was moving in. It also was about how it happened. Because 5731 Broadway had been the subject of rumors surrounding the possibility it could be used for the homeless, CB8 members had grilled its developer, Stagg Group, over plans for the structure. Each time, however, CB8 was told it was going to be “market-rate” units, and denied any influence by homeless services.

That changed this last spring, however, when Stagg was reportedly approached by DHS to possibly open a shelter of some sort in Kingsbridge. Both sides are now working to cement a contract, which would be finalized after a public hearing.

Elected officials, however, said they were caught off-guard.

“There was no consultation, and this is the first public hearing about it,” Councilman Andrew Cohen said. “We need to hit the brakes on this and have a dialogue.”

Cohen, however, was focused on nearby P.S. 7 Milton Fein School, which already is overcrowded. The addition of 80 families, he said, would only make it worse.

Although Cohen later couldn’t explain why he wasn’t against the apartment building in the first place when it came to school overcrowding, Assemblyman Jeffrey Dinowitz told The Riverdale Press that most of the units at 5731 Broadway were single-bedroom. So at market-rate, those units would likely not be filled with kids.

Under the transitional housing plan, each family moving in would require at least one child under the age of 18.

While the more than 300 people who gathered for the meeting last Thursday heckled and whistled on in opposition to the homeless facility, there were some community members who got up to speak in support of the DHS plan.

Rebecca Lish lives outside of Kingsbridge, but said she would support a facility like this, even if it was in her own neighborhood.

“I grew up one of three children of a single mother who sometimes had to depend on food stamps,” Lish said. “We succeeded largely because of the color of our skins, but additionally because of the support of our community. And I am ashamed that you would have this project killed.”

The city has yet to schedule the hearing on the 5731 Broadway contract, but it’s expected to take place within the next several weeks.