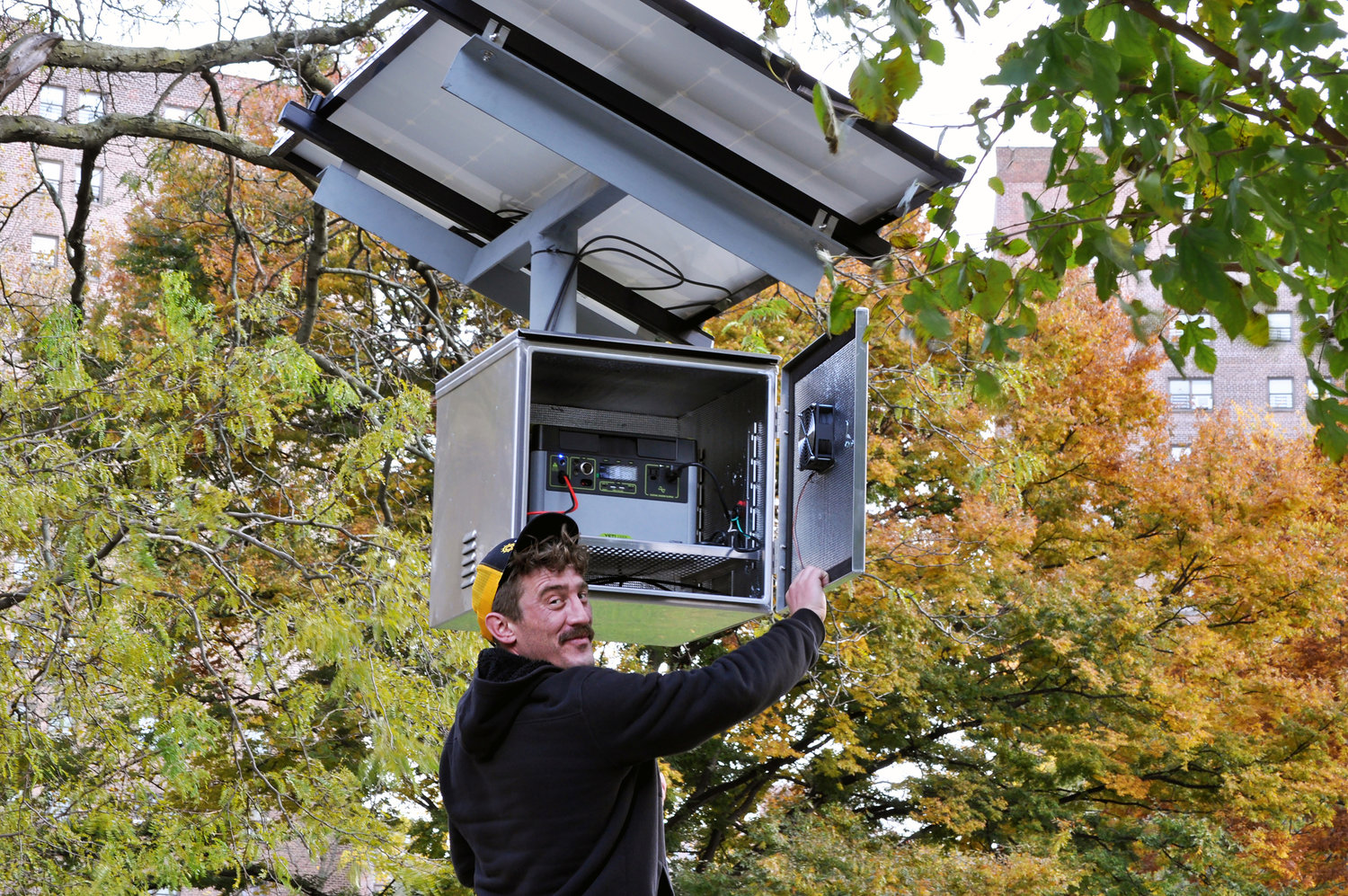 A newly installed solar panel will power lamps attached to nearly a dozen garden beds in a community garden at Marble Hill Houses during the early evening hours. Sam Breslaw, who leads such installations for Brooklyn SolarWorks, was hands-on with this particular project, which could help improve safety for gardeners and even tenants.
SARAH BELLE LIN
By SARAH BELLE LIN

The community garden at the Marble Hill Houses has been busy. But now more light can be shed on those projects thanks to a single solar panel installed in the garden of the New York City Housing Authority complex just across the Manhattan borough line intended to make gardeners and other tenants who happen by feel safer after the sun goes down.

The renewable energy project will light up Marble Hill’s fenced area off Broadway and West 228th streets with lamps attached to each of the garden’s 11 vegetable beds between 5 p.m., and midnight during the winter months.

Two years in the making, the new lighting scheme was celebrated during a Nov. 13 dedication ceremony where public officials, community leaders and a number of Marble Hill neighbors braved what had been a rainy, windy Saturday.

U.S. Rep. Adriano Espaillat says the donation by Brooklyn SolarWorks is important because Marble Hill Houses doesn’t necessarily have access to specific funding resources like some of its counterparts do.

“Marble Hill was not federalized like other NYCHA buildings,” Espaillat said. “As a result, it was not getting the federal dollars that it needed. Now that we have so much money coming through the city, we have to be innovative and creative.”

“We wanted to be able to present and demonstrate what solar and renewable energy all means and how it impacts our lives in a small way,” Fischer said.

The garden’s executive director, Juanli Carrión, expects there will be a number of programs planned beginning in spring sharing the benefits of renewable energy and sustainability — especially with how it can help move the Marble Hill Houses community into the future.

“I see community gardens as a reflection of how we, as individuals and as communities, can be self-sufficient,” Carrión said. “It’s more powerful than you think. It goes completely against the status quo.”

The project hopes to loop in local young people, encouraging awareness of the renewable energy sector so more of them can get involved early on. One school Fischer would like to work with is IN-Tech Academy on Tibbett Avenue.

Daniela Benavides, an IN-Tech senior who lives at Marble Hill, says the solar panel installation has opened a world of possibilities.

“Many people think this is a lower-income community,” Benavides said. “They don’t think of us as a place you’d want to be at. But seeing this happen, it brings a lot of hope. I can see how this affects the community a lot.”

Tony Edwards, the president of the tenants association at Marble Hill — and a lifelong resident of the complex — says he believes in Fischer’s vision.

“Her initiative is trying to find something more sustainable,” Edwards said. “If her initiative progresses, who knows, one day there might be something to provide power for all the buildings here. If it expands, we can ignore Con Edison.”

The Marble Hill Houses landscape has improved in recent years, Edwards said, citing the removal of “chain-link fences around any place that had grass” and the lack of police.  Still, this year, the NYCHA development has been hit with multiple robberies, felony assaults and grand larcenies, according to the New York Police Department.

“I’ll be honest, I’m a little jaded,” said one resident, Tika Marshall. “The garden is great. The solar panel is great. But there (are) a lot of everyday issues that the residents face that need to be fixed. And I don’t really feel like that’s the most important thing to pour energy or money into. Everyday things matter more.”

That means focusing on lights throughout Marble Hill Houses, not just the community garden.

“Most of them don’t really work,” Marshall said. “They’re not adequately lit. There (are) lots of dark spots where you wouldn’t know if somebody’s there until you’re really close up on them.”

Brooklyn SolarWorks installed the panel at Marble Hill Houses, joining another similar installation the company did up the hill a bit near Seton Park. T.R. Ludwig, the company’s chief executive, told The Riverdale Press an installation like this could cost $500.

The panels generates about 360 watts of electricity — a relatively small amount that could power a waterbed heater or a dehumidifier.

Partnering with Brooklyn SolarWorks was Manhattan College’s engineering school, where undergraduate students like Megan DiVestea helped with planning through a course taught by professor Mohammad Naraghi.

DiVestea couldn’t visit the garden for a bulk of the project because of the coronavirus pandemic.

“It was overcome using Google Maps,” DiVestea said. “Hopefully once I get my degree, I can go on to contribute more to sustainability and fighting climate change.”

Say what you will about NYCHA, Fischer says the authority was quite supportive throughout the project. But still, “NYCHA is NYCHA. The bureaucracy is going to be there.”

But Marble Hill Houses will not be alone in its efforts to put more renewable energy to work. Ellen Zielinski, who leads those efforts for NYCHA, says the authority is bringing solar power to other communities.

“We have a goal to install 30 megawatts of solar power at our NYCHA developments,” Zielinski said. “So far, six buildings already have solar.”

Some upcoming initiatives NYCHA has up its sleeves are a climate action grants program for its tenants, and a clean energy training academy to help place even more of them with jobs within the green sector. So far, more than two-dozen people have been hired and trained for solar jobs within their communities.

“We have a commitment to invest another $40 million in renewable energy,” Zielinski said. “Those jobs need to go to NYCHA residents. People in the community have their own ideas and activism, and we want to put money in their pockets to do projects like this one.”