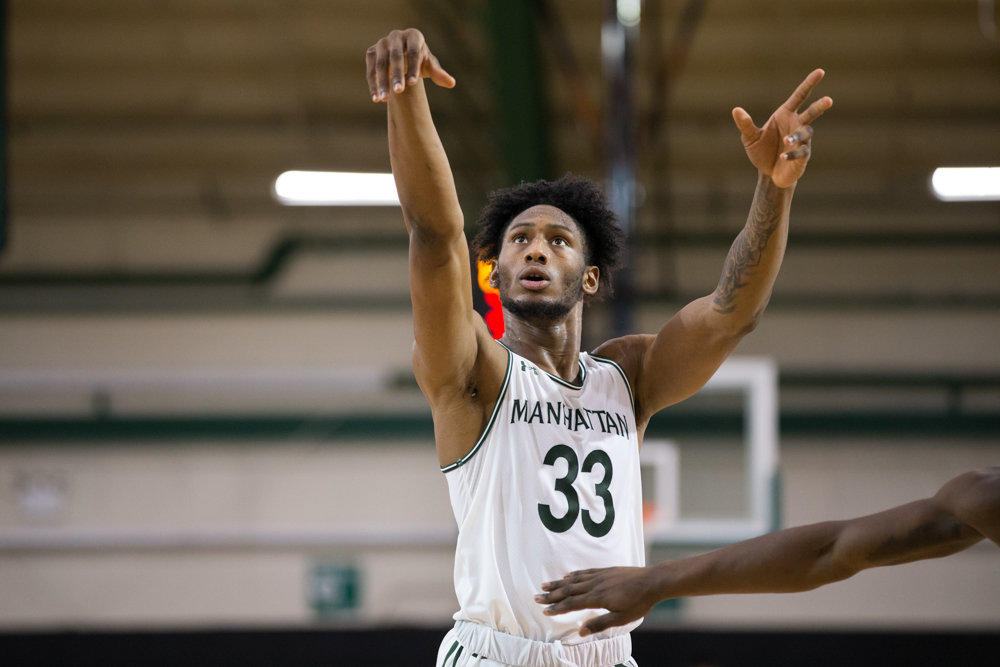 Pauly Paulicap is the reigning MAAC defensive player of the year even though the Manhattan junior has only participated in organized basketball since the 11th grade.
Courtesy of Vincent Dusovic 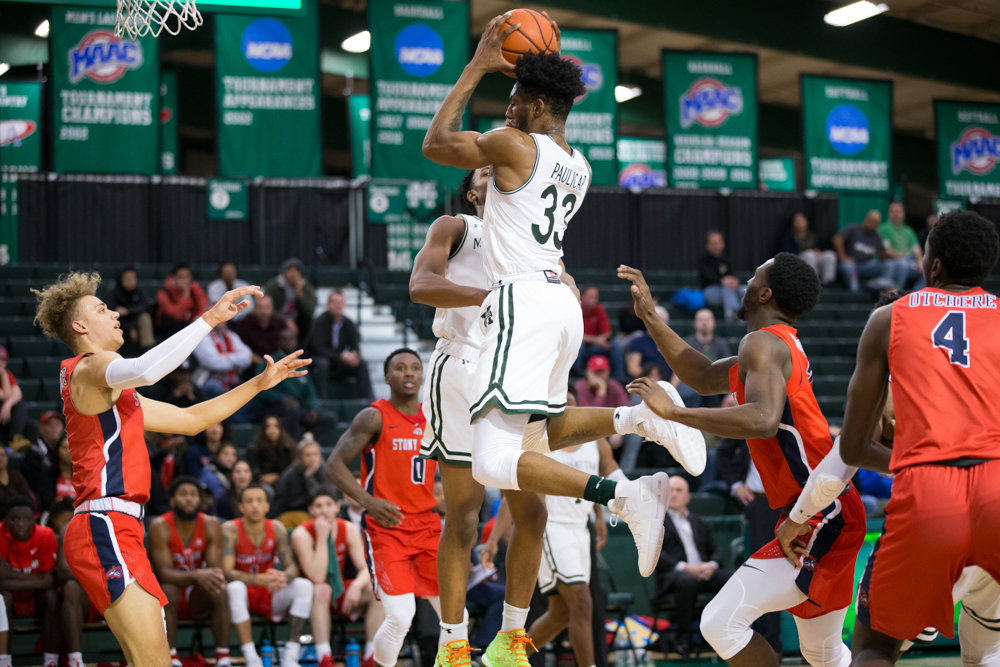 Manhattan’s Pauly Paulicap has come a long way since his high school days when food and shelter were not as sure a thing as one of his blocks on the basketball court.
Courtesy of Vincent Dusovic
Previous Next
By SEAN BRENNAN

Life is pretty good for Pauly Paulicap these days.

The 6-foot-8, 220-pound forward for the Manhattan College men’s basketball team is in his second season coming off a brilliant freshman campaign in which he led the Metro Atlantic Athletic Conference in blocks, even earning himself a spot among the top-four blockers in school history that ultimately earned him the title of the conference’s best defensive player.

Sure, he would like to help put the brakes to the Jaspers’ 2-10 start to the season, and that just may happen once he is fully recovered from a nagging foot injury. But life is good — even very good — for Paulicap. And it’s light years better than where he was just a few years ago during his high school days on Long Island when having a meal and a roof over his head were almost daily challenges.

“I don’t really like getting too deep into it,” Paulicap said. “But my mom had a hard time keeping up with the bills, and we moved a lot from home to home. I have four brothers and three sisters, and she was trying her hardest to take care of all of us. But it wasn’t easy. We were all over the place, and we just tried to make whatever we had work.”

Adding further tension to an already stressful situation was the fact Paulicap and his brothers Rawlis, Ted, Randolph and Christopher were regularly finding trouble, which only led to more instability in his life. That’s when Pauly, the youngest of the Paulicap clan, knew it was time for a change.

“We were knuckleheads,” Paulicap said. “But me being the youngest kid and seeing all the stress that my mom had, I wanted to be the difference and change the way everyone thought of the Paulicaps.”

So with the help of old school friend David Anderson, as well as his parents Karl and Margaret, Paulicap found the stability he had long searched for when the Andersons opened their home to Paulicap. It’s the turning point moment in his life.

“My mom was just having a hard time,” Paulicap said. “She worked three jobs and the third job was taking care of all of us. So (the Andersons) took me in and that’s when I basically got some stability. I had a meal to eat, clothes to wear, things like that. Then with that stability I was able to skyrocket.”

With a stable home environment, Paulicap turned his attention to athletics — particularly basketball, volleyball and track — and in no time the kid who never played organized sports until his junior year began to flourish.

“I wasn’t a good student and I was always getting into trouble and hanging out with the wrong crowd,” Paulicap said. “But I realized that if I kept that up then nothing at home or at school would get better. So I told myself it was time to grow up.”

Soon there were basketball offers from junior colleges. Paulicap ultimately chose Harcum College in Bryn Mawr, Pennsylvania, leading the Trojans to a 22-9 record while averaging 9.3 points and 7.3 rebounds in his one season there.

“The first thing that made me come here was coach (Steve) Masiello really sold me on Manhattan,” Paulicap said. “The way he spoke, it just drew me in. I knew I needed to get out of my comfort zone, and I knew he was the coach that was going to do that. Plus I wasn’t looking to go to the best-looking school or the school with the best campus. I wanted to get better. I wanted to make basketball what I was going to do with the rest of my life.

“So after some conversations with Coach Masiello, I knew this was the place for me.”

Paulicap averaged 10 points and 6.9 rebounds last season along with a MAAC-leading 2.5 blocks per game. This season, though slowed by that foot injury, Masiello rewarded Paulicap’s effort and hard work by naming him a captain.

“Everything happened really fast, faster than I expected, to be honest,” Paulicap said. “They are all blessings from God. A lot of people would say, ‘Pauly worked and deserved this,’ and I think that is really fair to say because I fought every single day to get to where I needed to be. And that was tough coming from the background I came from.”

Though his daily life has changed for the better now that he’s at Manhattan, Paulicap said problems do remain on the homefront.

“Things have changed as far as the situation I’m in, but things have not really changed that much,” he said. “So that kind of keeps me going. I don’t like to discuss what I go through as far as family stuff. But it gives me the drive and motivation to keep going. I use that as fuel to keep pushing.”

Paulicap said his mom, Marie, is doing well and is a regular visitor to Draddy Gym to see her youngest son play ball.

He is thankful every day for basketball, for the Andersons, and for being at a school where Paulicap can feel like part of a family as he pursues his post-college dreams.

“The everyday experience of being here is truly a blessing,” Paulicap said. “I think back to how bad things were and that’s what pushes me to keep moving forward because I do not want to end up back there. That’s how bad it was. I’m just grateful for right now. Manhattan is definitely like a family to me. From academics to athletics to the facilities, this is like home.”

Paulicap believes his foot injury should be “100 percent” by the time the MAAC season begins on Jan. 3 when the Jaspers host Quinnipiac at 7 p.m., before facing Niagara on Jan. 5. And when his college career is over after next season, he has hopes for a shot at the NBA, If that doesn’t pan out, maybe even play professionally in Europe.

But while his future plans remain uncertain, Paulicap is sure of one thing in his present — he has made his mom proud.

“She calls me every day to tell me,” Paulicap said with a large smile. “She tells me, ‘I’m really, really proud of you.’ I was the last one expected to make these changes, so that makes her even more happy. The doubt from other people and the trouble I used to get into, everyone used to say, ‘Pauly is not going to do much.’ Well, I think when I beat those odds, it kind of made her open her eyes and say, ‘Wow, Pauly actually changed.’

“I think she’s really proud of me now.”