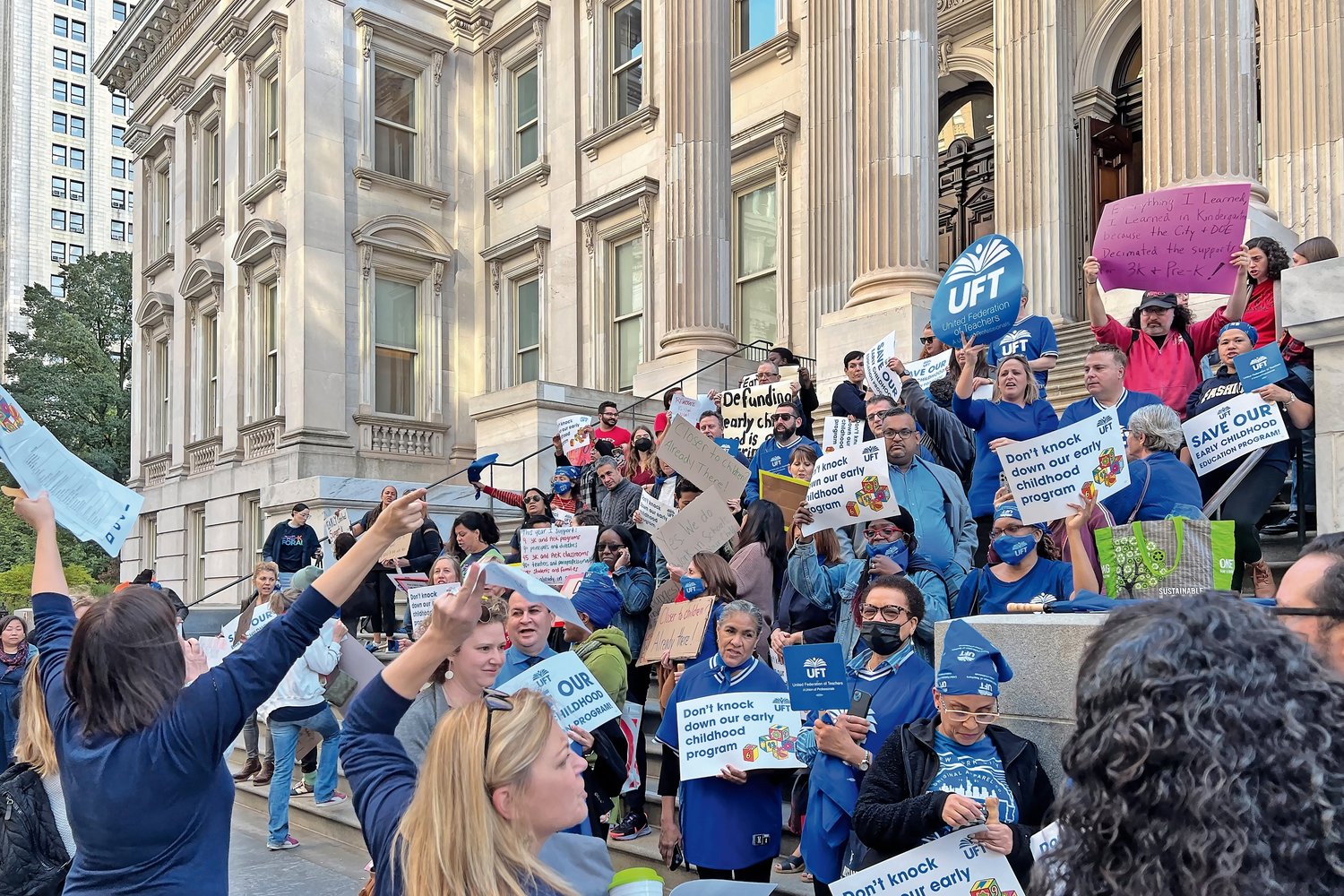 Social workers, advisement coordinators, parents and other educators gathered together at a rally on Nov. 4 outside the education department headquarters at the Tweed Courthouse in Manhattan.
STACY DRIKS
By Stacy Driks

The education department’s Division of Early Childhood Education came under fire after the most powerful teachers union called it a broken and disorganized system to the point where their trust is gone.

The second in command of the education department’s early childhood education division was the center of attention. In an oversight hearing last month, Kara Ahmed allegedly said misleading information about 400 staff workers.

Many of these positions were social workers and instructional coordinators.

Devora Cafiero, an instructional coordinator, stepped to the podium in front of Tweed Courthouse in Lower Manhattan at a United Federation of Teachers rally and claimed she does not consider Ahmed a part of her idea of educational leadership.

Following a loud cheer from the protesters, Cafiero said teachers are in mental distress.

The UFT circulated a recent vote of no confidence in the leadership of Ahmed to its early childhood members. Many of its members who voted or plan on voting are from greater Riverdale.

“They (the early childhood education division) once again disrespected us during our working hours and said ‘no one is losing their job,’” Cafiero said. “If they are proud of your transparency, why are they spending so much public effort to hide everything? They chose to ignore those that they are supposed to lead.”

“What do we want? Reinstatement when do we want it? Now!,” chanted the protesters who wore the union’s color, blue, in solidarity.

While these pre-K teachers are still on the payroll but have been excessed, it is still being determined where they would be sent to work.

However, realizing this is a citywide issue, it is unsure how many in the greater Riverdale are affected. However, the ones who are not are tuition based, according to one director of a private preschool.

Educators are all too familiar with their colleagues transferring to different schools. Last summer, the education department directors warned schools that some teachers would be excessed due to the low enrollment in public city schools.

Now early childhood is targeted. Many pre-K providers in greater Riverdale had a directors meeting and allegedly were all in agreement that the situation was a nightmare.

However, this goes beyond positions. The city owes private early childhood education — pre-K and programs for 3-year-olds — millions of dollars in reimbursements. This delay forces directors to take out personal loans or use credit lines while waiting for their payments.

Ahmed said that they have yet to receive invoices from some providers. She claimed she was missing roughly 4,000.

Councilman Eric Dinowitz pushed back on the city’s early childhood division because schools in his district did, in fact, send in those invoices. Yet, the community-based organizations did not receive payment — and still are waiting.

What happens is pretty simple. Community-based organizations submit a budget in June. The education department often returns and says they need paperwork, whether it be teacher certification or supporting documentation.

This year the budget was approved nearly a year later.

“The problem with that is they don’t get paid until the budgets are approved,” Dinowitz said. “They’re operating on bridge loans during the 2021-2022 school year.”

In some cases, directors were told to spend the money on the budget prior to saying anything that was delivered after June 30 would not be paid. That can add up to thousands of dollars.

The councilman, who is a former educator and the chapterlLeader for the UFT, said pre-K centers could only submit invoices for subsequent months once they’re paid for the month they submitted them. He is not confident that Ahmed has the correct information that providers never submitted invoices.

“After 52 years in early childhood education, I have never seen such a crisis,” said Lois Lee in the hearing.

She is the director of an early childhood center with six centers and 21 school programs in Queens.

The issue with their back payments — the city owed $4.6 million last fiscal year in June. The center submitted its invoices in early 2021 and was only approved in May of this year.

“We needed to scramble for enrollment and attendance for our pre-K kids who have been sitting in our program,” Lee said. “OK, now the invoices are stuck in September, we can’t even move onto October. So, what is the problem on the DOE side? Don’t blame us, we know how to do invoices.”

Some providers were forced to shut their doors because of these delays.

Those centers, which were mostly in areas where children receive childcare and three meals per day, will close by the end of the year.

“They refuse to take ownership for their actions and still blame the previous administration,” Cafiero said.

Department officials blamed a complicated payment system on former Mayor Bill de Blasio’s signature policy for universal free education for 4-year-olds. de Blasio eventually expanded the similar initiative to 3-year-olds and in 2020 3-K programs were in half of the city’s school districts while the following year, it spread to all districts.

However, it spread too fast.

The administration used close to $2 billion of federal stimulus dollars and continued to set forth more seats for the 2024-25 academic year. There was no plan on how to pay for the expanding initiative.

According to the  state comptroller, the program will cost $470 million.

However, the Eric Adams’ administration had months to correct anything that was confusing for them. It seems like that didn’t happen.

Brooklyn councilwoman and chair for the education committee said around the city there are reports of unfilled seats, while others have too many. And some neighborhoods don’t have enough multilingual teachers she added in her hearing opening.

According to the Citizens Committee for Children, the city owes early childhood programs more than $400 million for the year. However, the education department said it is much less funding while they await in invoices.

Dinowitz pressed the department to create checklists for help on submitting budgets and contacts.

Simone Hawkins who sat next to Ahmed as executive director for operation — who no longer is in the agency — told Dinowitz the agency can improve systems — but nothing more.

Interestingly, two weeks after the hearing, in a press conference, Chancellor David Banks said he would put together a team to help providers to file invoices to receive the reimbursement properly.

“Today we announce that we will pay providers — all providers at least 75 percent of their contract of fiscal year 2022,” School Chancellor David Banks said in a press conference last week.

Meaning, regardless of a drop in enrollment, providers will still receive that percentage, according to an agreement announced by Adams and the education board last week. The city council applauded the new agreement with the DOE.