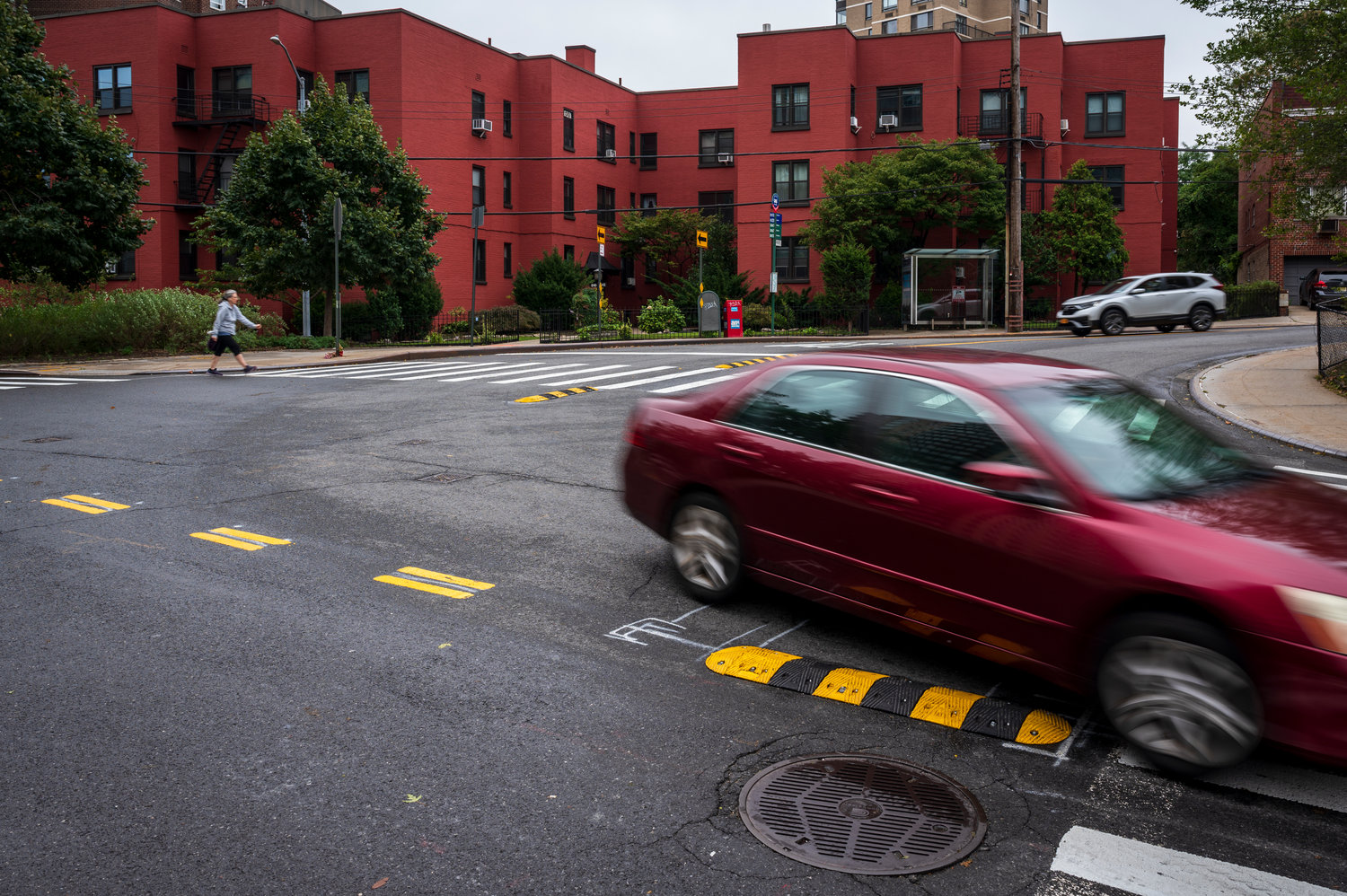 The city’s transportation department recently added left-turn ‘calming measures’ resembling mini-speed bumps and repainted the crosswalks at the intersection of Kappock Street and Johnson Avenue. These changes came after a wave of outcry after an express bus driver struck and killed prominent neighborhood resident Ruth Mullen while she traversed the crosswalk.
HIRAM ALEJANDRO DURÃN 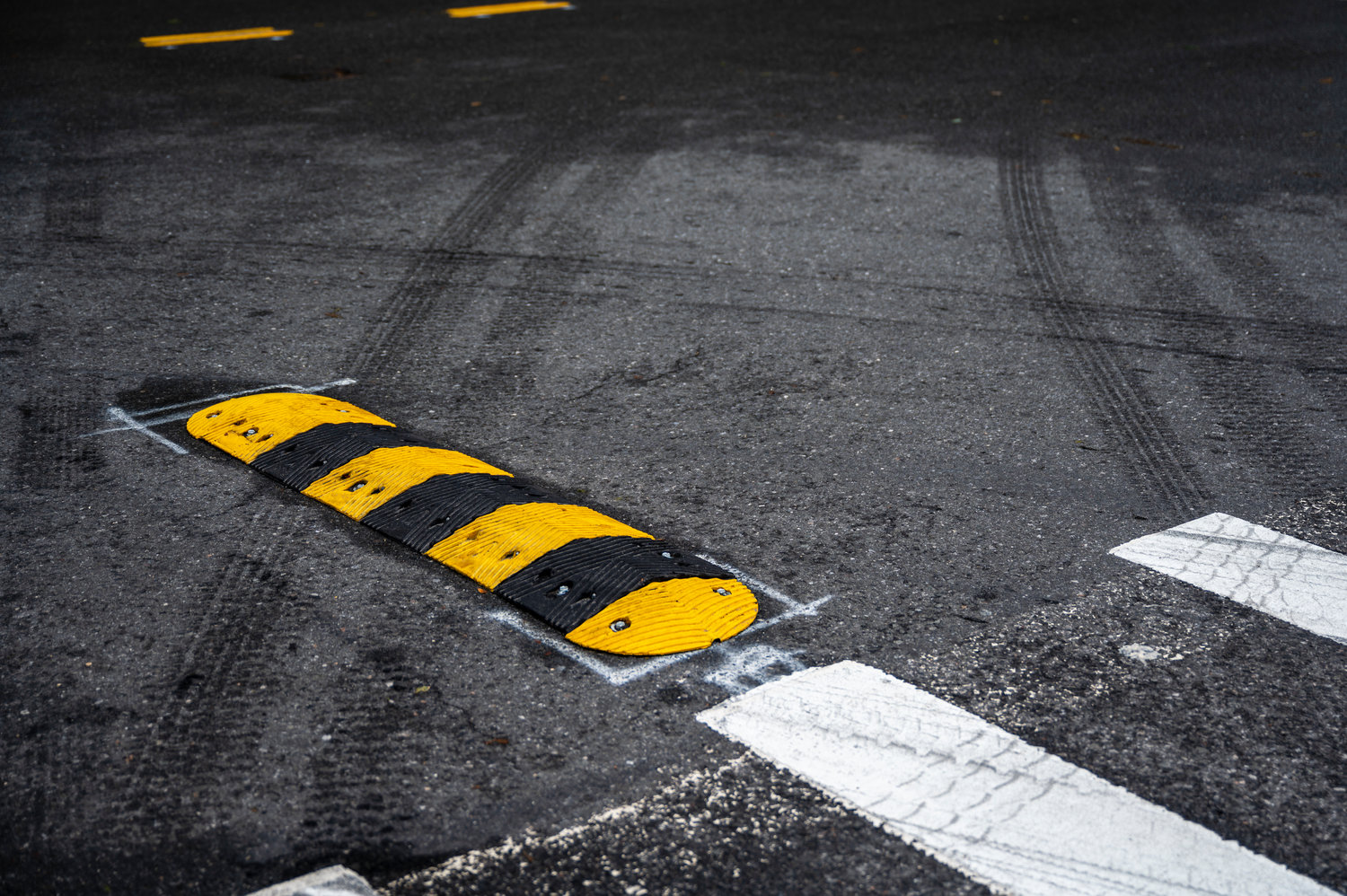 New traffic safety treatments, including left-turn calming measures resembling speed bumps and repainted crosswalks, have been added to the intersection of Kappock Street and Johnson Avenue in Spuyten Duyvil. The city’s transportation department took action after prominent resident Ruth Mullen was struck and killed by an express bus driver while in the crosswalk there last month.
HIRAM ALEJANDRO DURÃN 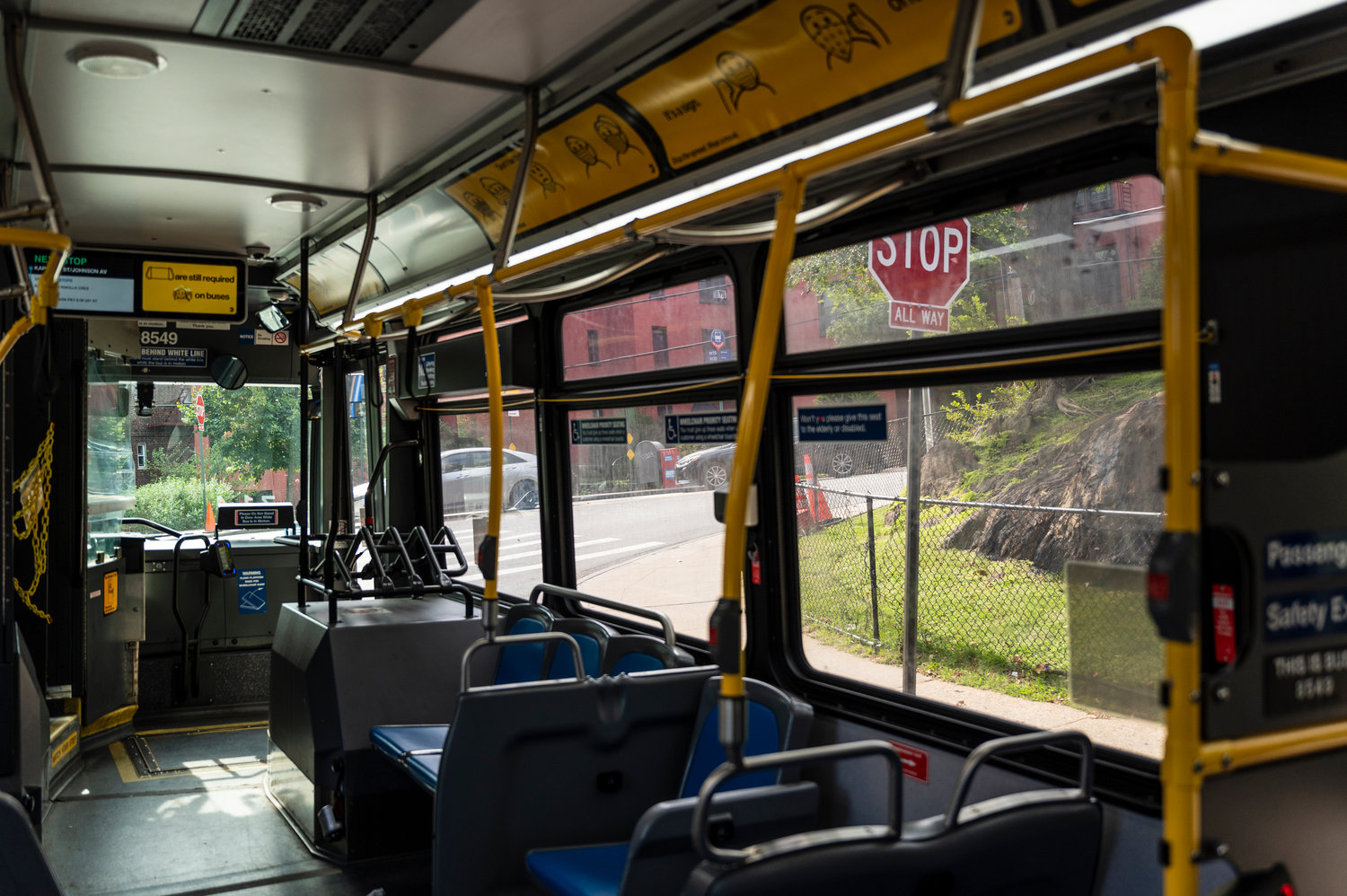 Ruth Mullen was hit and killed by an express bus at the intersection of Kappock Street and Johnson Avenue early last month in Spuyten Duyvil. Since then, the city’s transportation department has installed new safety treatments like left-turn calming measures resembling mini-speed bumps to help make the intersection safer.
HIRAM ALEJANDRO DURÁN/ File 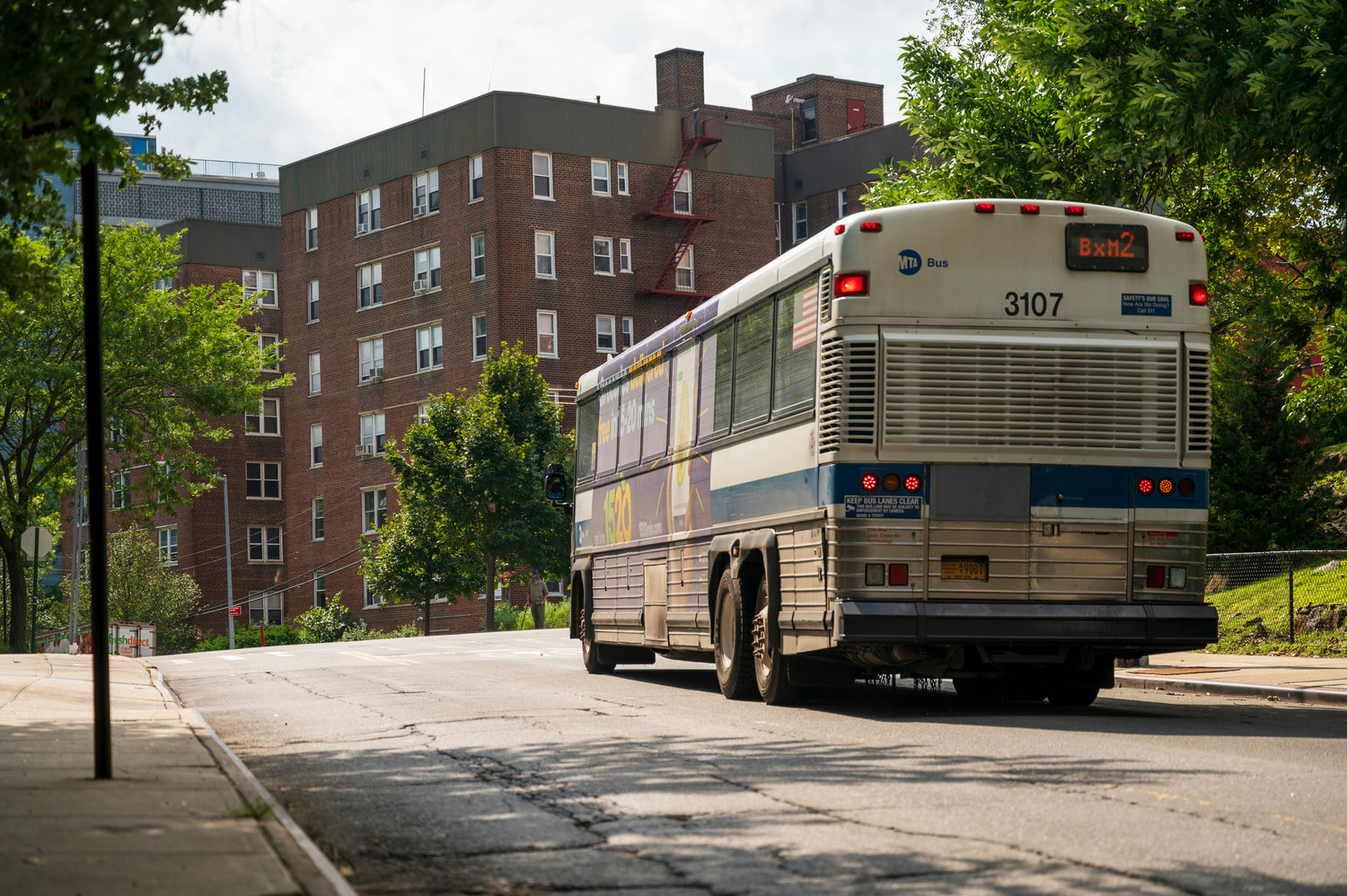 This corner of the Bronx lost a powerful advocate when community activist Ruth Mullen was struck and killed by an express bus driver while walking near the intersection of Kappock Street and Johnson Avenue in Spuyten Duyvil. In response to public pressure, the city’s transportation department repainted the crosswalks and added what appeared to be mini-speed bumps in an attempt to slow turning traffic.
HIRAM ALEJANDRO DURÃN/ File 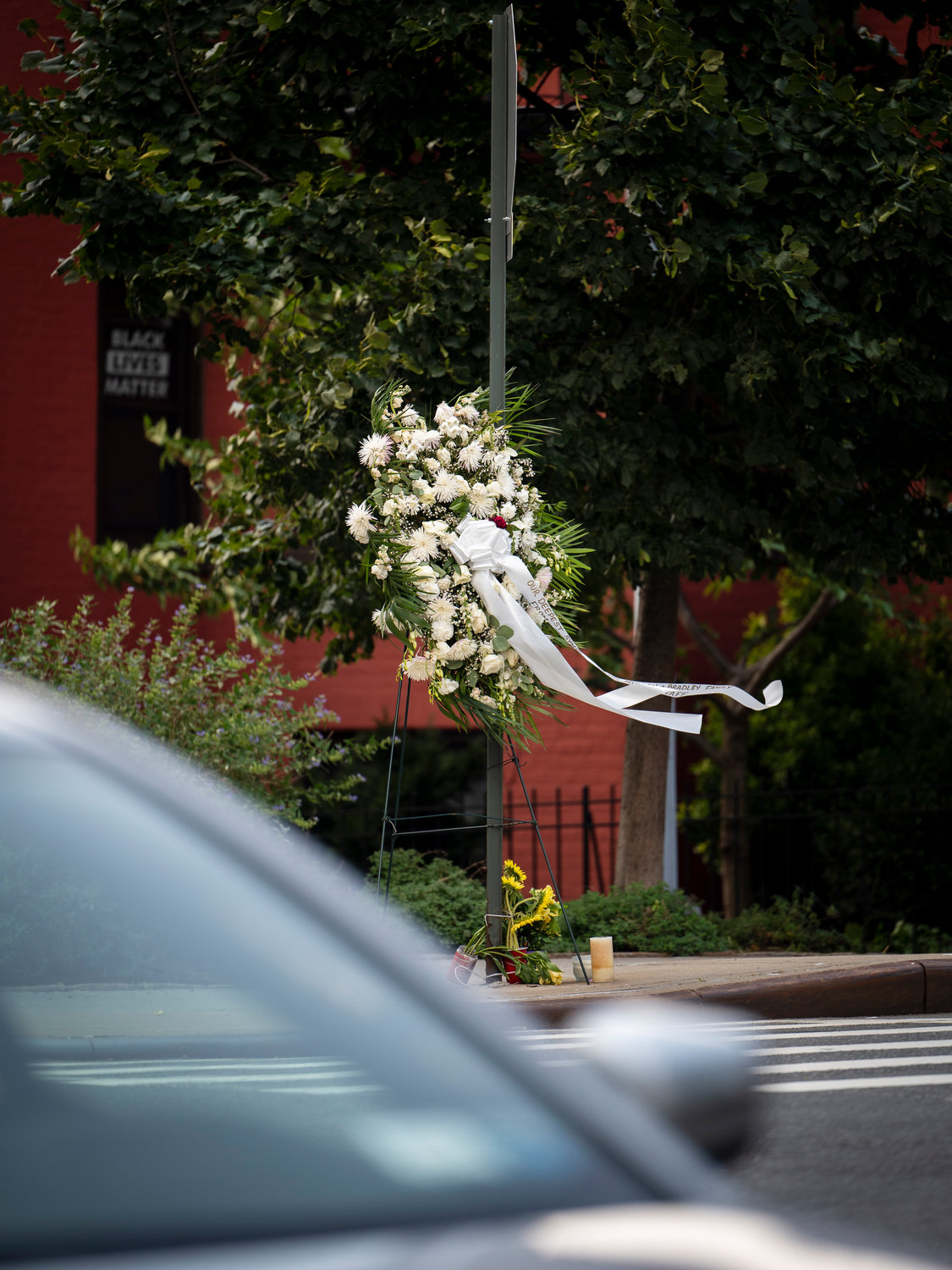 After Ruth Mullen was struck and killed by an express bus driver at the intersection of Kappock Street and Johnson Avenue last month, Councilman Eric Dinowitz called on the city’s transportation department to make the Spuyten Duyvil crossing safer. The DOT moved quickly to do just that, Dinowitz says, by adding what appears to be mini-speed bumps, and commissioning a study to see if the intersection can support a traffic light.
HIRAM ALEJANDRO DURÃN/ File
Previous Next

We want it to be safe for people to cross the street. I appreciate that (DOT) is moving quickly and coming up with different treatments and ideas to make that intersection safer.”
DEB TRAVIS
By ETHAN STARK-MILLER

It seems rare city agencies quickly respond to community demands. But so far, changes like what’s happening where Kappock Street and Johnson Avenue intersect in Spuyten Duyvil are the rare exception to that rule.

The city’s transportation department began initial upgrades to the perilous crossing earlier this month. Its work comes a few weeks after community activist Ruth Mullen was struck and killed by a Metropolitan Transportation Authority express bus driver while walking across Johnson, police said. She lived at the Winston Churchill, right next to the intersection.

Mullen, 68, was known broadly for her decades of work in the publishing and film industries. She was also known more locally for her dedication to community issues — like installing a traffic light at the very intersection that ultimately took her life.

Neighbors blame the area’s topography for why the intersection is especially dangerous. Kappock is on a hill, so any cars coming down that street into the intersection must hang a sharp left, virtually blocking any views of pedestrians until almost the last second. While Assemblyman Jeffrey Dinowitz pushed for more stop signs at the intersection some years ago, many say cars tend to roll right through them.

Sadly, it seems more extraordinary action to calm the intersection was going to take a tragedy — one that ultimately claimed Mullen from her family and friends. But even if it is happening far later than it should have, Deb Travis — chair of Community Board 8’s traffic and transportation committee — says she’s impressed DOT has already started work.

“We want it to be safe for people to cross the street,” Travis said. “So, I really appreciate that they’re moving quickly and coming up with different treatments and ideas to make the intersection safer.”

The Assemblyman’s son, Councilman Eric Dinowitz, told the CB8 committee at a recent meeting he, too, was happy to see DOT’s quick response.

In fact, when he made the trek down to see the street work in progress, Dinowitz was granted a bird’s eye view.

“In a true New York moment, some guy who was on his terrace screamed out at me and said, ‘Hey, come on up,’” Dinowitz said. “So, I went up to some stranger’s apartment, and I was able to see the traffic improvements from his terrace.”

There are still a few enhancements left, however.

For instance, DOT will relocate a nearby streetlight with the hope it gives drivers a better view of pedestrians crossing the street. There are also plans to replace the sidewalk head ramps at the intersection to make them compliant with the Americans with Disabilities Act. And DOT says it’s committed to working with the MTA to ensure its bus drivers are better trained.

Most importantly, Kalb said, DOT is studying whether the intersection could support a traffic light.

Craig Sachs, who lives in Spuyten Duyvil, told the transportation committee he supports DOT’s efforts, but hoped the agency would consider adding a pedestrian-activated traffic signal. When a pedestrian looks to cross the street, they can press a button that changes the light to red, immediately bringing cars to a stop.

Such a concept wouldn’t work here, however, Kalb said.

“We don’t generally have intersections where all vehicles stop and only pedestrians move,” he said.

Instead, the city has what are called “leading pedestrian intervals,” which makes all cars stop, giving pedestrians a head start to move in advance of the cars.

Another issue raised was enforcement. Sue Dodell — a member of the newly renamed Ruth Mullen Riverdale Huddle — said the lack of a New York Police Department presence is one of the crossing’s main problems.

“My understanding is that people go through the stop signs all the time at that intersection,” Dodell said. “Obviously if we — even for a short amount of time — had some enforcement there, perhaps that would discourage people from going down the hill quickly.”

But what about the bus driver involved in the Mullen incident? Assemblyman Dinowitz admits he’s heard nothing new about the status of that investigation.

“I’m not sure why it’s taking so long,” the elder Dinowitz said. “It seems to me that there’s not that many issues here that have to be investigated.”

No matter what, Councilman Dinowitz said, he and his father are going to keep pushing for more traffic safety measures throughout the community.

“Because whether it’s Johnson and Kappock, or whether it’s anywhere else in CB8, no one needs to be speeding through the neighborhood,” Dinowitz said. “And if we put a speed bump in or a stop sign in to help slow the traffic down, that’s what we want to do.”