It's never too cold for art at Wave Hill 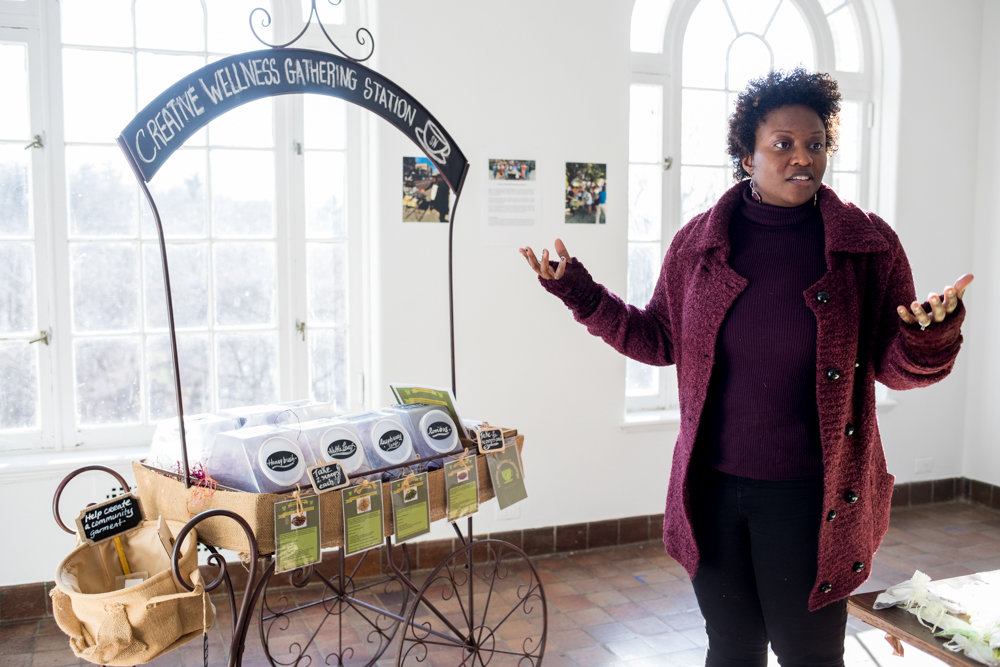 Shervone Neckles talks about her interactive art piece, 'Creative Wellness Gathering Station,' that she has worked on as part of the Winter Workspace program at Wave Hill. Visitors are encouraged to combine different types of tea for free.
JULIUS CONSTANTINE MOTAL 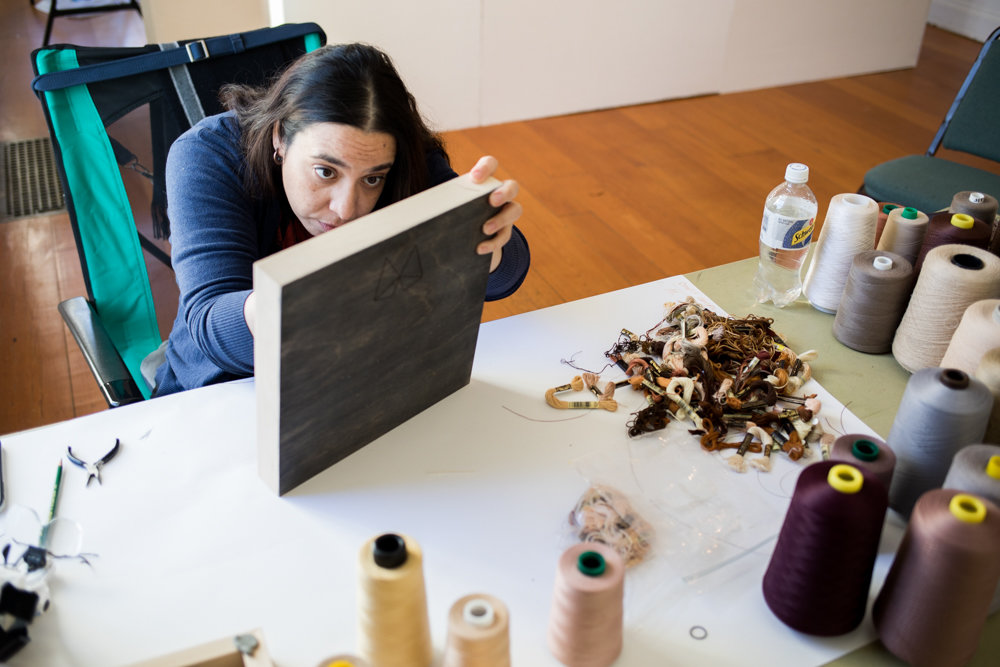 Melissa Calderón embroiders a piece of wood as part of her artistic practice in the Winter Workspace program at Wave Hill. Calderón seeks to merge her love of embroidering with wood, an unconventional material.
JULIUS CONSTANTINE MOTAL 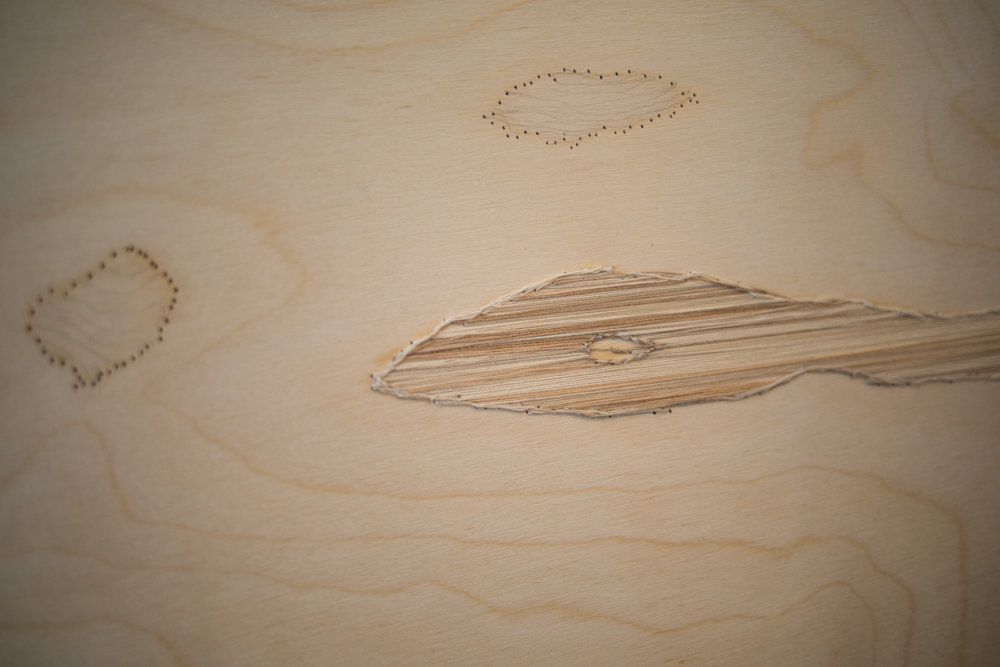 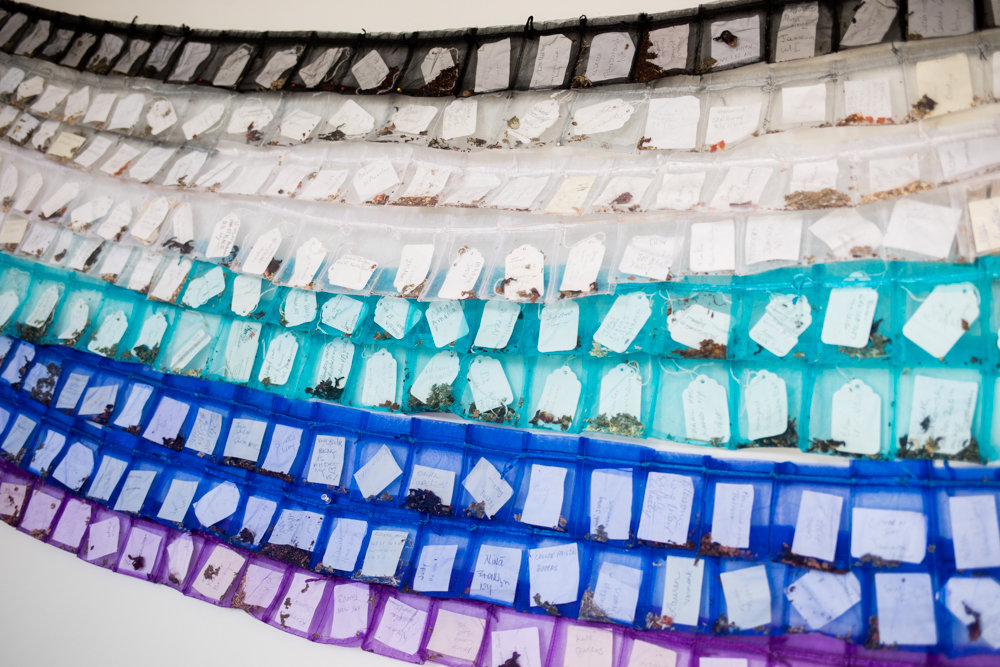 Custom tea bags hang on a wall in the Glyndor Gallery at Wave Hill. Shervone Neckles works with myriad teas in the Winter Workspace program at the garden.
JULIUS CONSTANTINE MOTAL 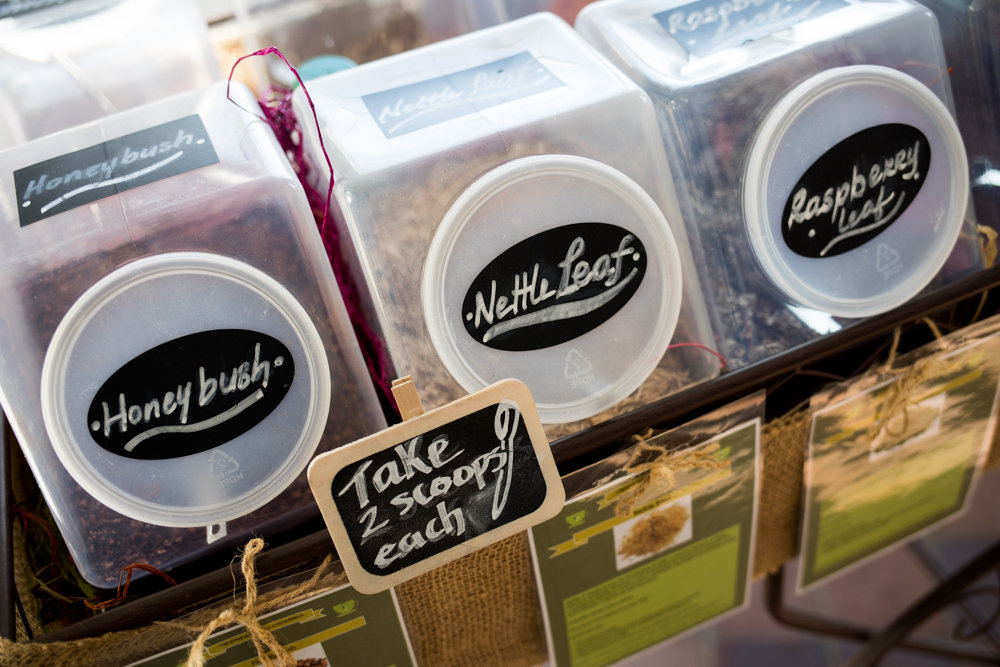 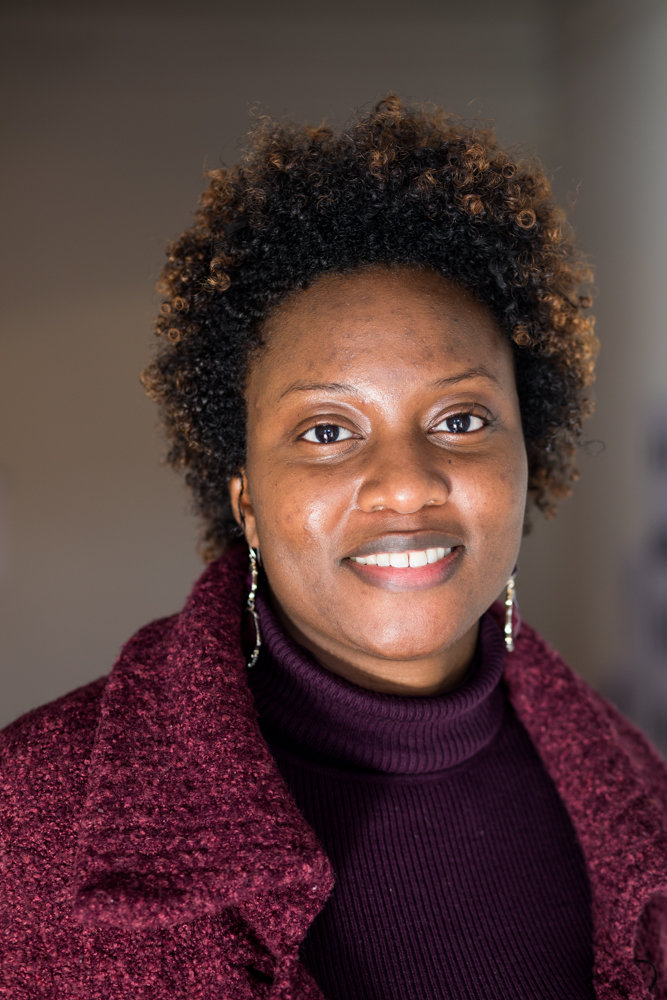 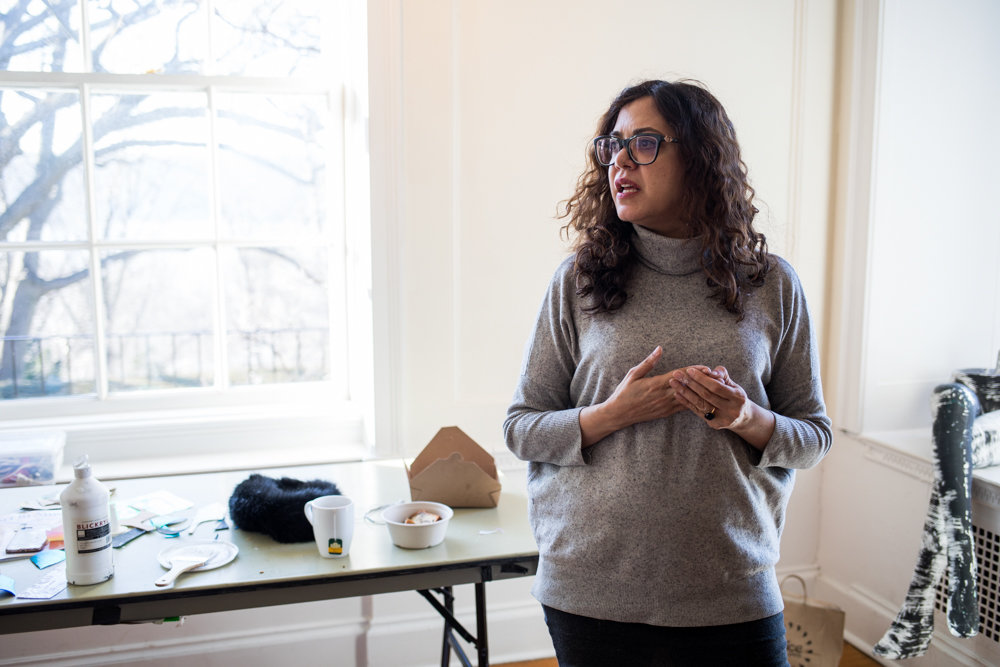 Armita Raafat talks about the influence of Islamic art on her artistic practice. Raafat is a participant in this year's Winter Workspace program at Wave Hill.
JULIUS CONSTANTINE MOTAL 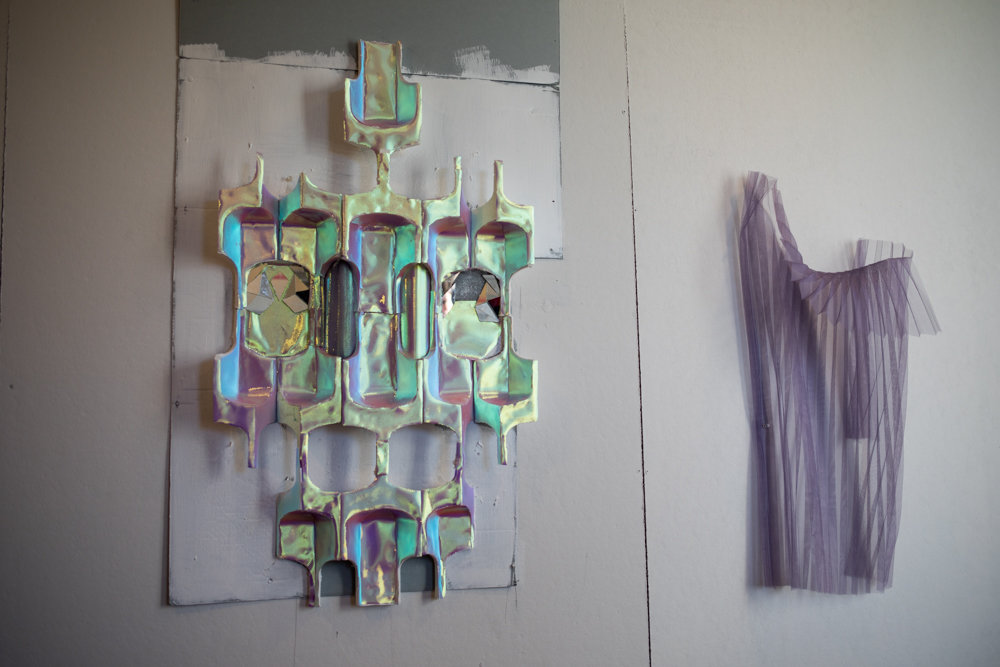 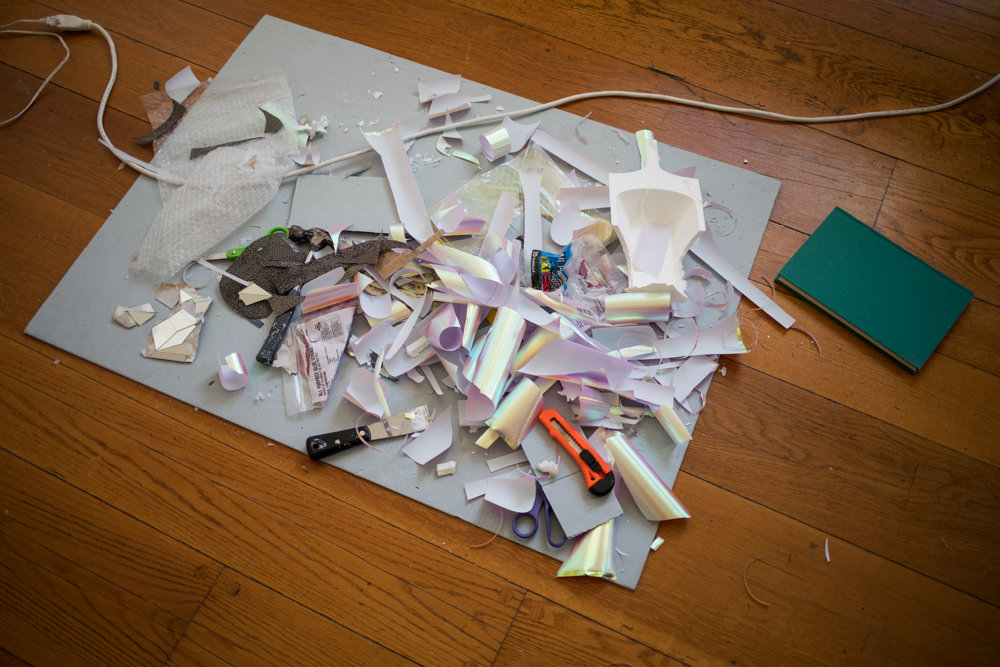 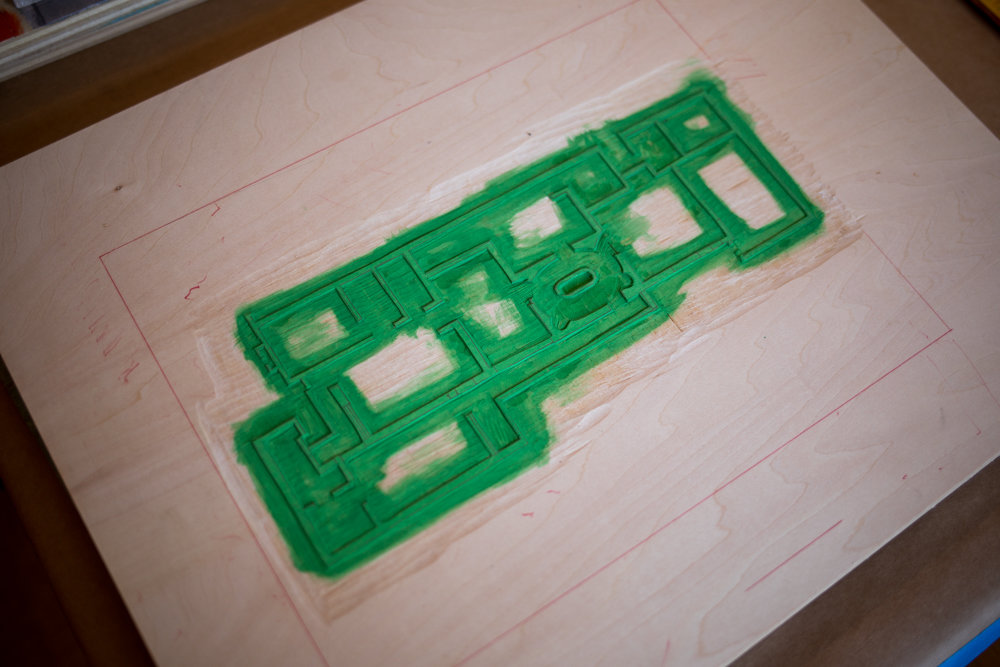 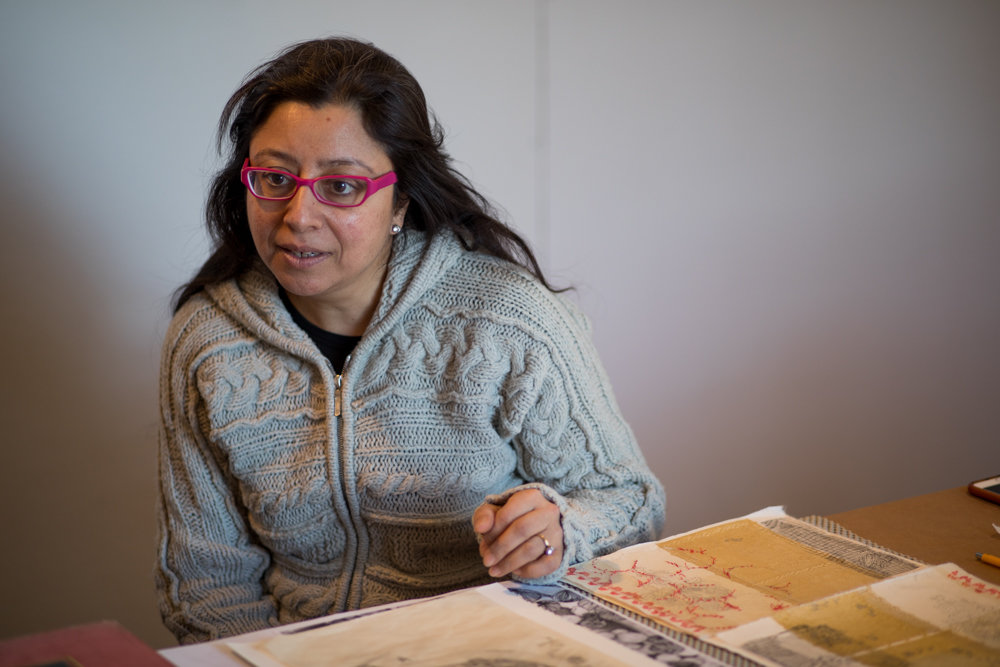 Nandini Chirimar talks about her drawing and work with Japanese woodblock prints that she has experimented with in Wave Hill's Winter Workspace program.
JULIUS CONSTANTINE MOTAL
Previous Next
By TIFFANY MOUSTAKAS

As temperatures drop outside, Shervone Neckles offers a warm alternative inside — tea with a touch of art.

A few years ago, Neckles began the “Creative Wellness Gathering Station,” an interactive art piece where she occasionally sets up shop in areas like her neighborhood in Jamaica, Queens, and lets people combine different types of tea for free. Each person is encouraged to “leave an offering” of what they contributed by putting their unique tea in a small packet and add their name and where they call home to a little sash within Neckles’ station.

The different teas, herbs and spices her family — originally from Grenada — passed down from generation to generation to heal different ailments influenced Neckles’ decision to begin this project. She discovered an old family recipe and was “shocked at how knowledgeable” it was after she researched the ingredients.

From there, she was “really being inspired by nature in the ways in which it can recover and heal itself.”

“It was me returning to my own kind of wellness for myself and my family,” she said. “Why not share it with my community?”

Neckles has taken her health station a step further by working on a sewn garment of all of the collected tea packets to act as a shelter or tent as part of a project for Wave Hill’s annual Winter Workspace program.

Now in its 10th year, Winter Workspace hosts two six-week sessions between January and March allowing six artists in each group to use Glyndor Gallery as their studio space. Artists work with different media to create whatever inspires them throughout their time at Wave Hill.

Neckles’ searched for a “cultivating and nurturing space” for her gathering station — like Wave Hill — which would give her the time to expand the project.

Part of Winter Workspace allows Wave Hill visitors to visit Glyndor Gallery and watch the artists at work and interact with them during “Winter Workspace Drop-In Sunday” events. At a recent drop-in event, Neckles recalls a variety of reactions ranging from children being shocked that the tea tasted good, to adults seeing her as more than just a woman handing out tea samples, but an artist.

“It’s this beautiful evolution of the project that is inspiring, and it’s inspiring to me because I didn’t predict this,” she said. “I had no clue. It really is about the spaces that the project is in and how that space brings another life to it.

“It’s a learning process for me about how you really do have to flow when you’re doing any kind of social investigation. You do need to leave room. You can’t predict everything.”

Melissa Calderón’s Winter Workspace session wouldn’t have happened if she had not found her grandma’s old sewing kit. It helped Calderón remember how much she loved embroidering and how the two used to sew things like Cabbage Patch Kid clothes to sell together when she was a kid.

“When I found that, I was like, ‘I really want to go back to sewing,’” she said.

The kit led to Calderón’s project, “Wood Wounds,” where she drills tiny holes into wood and sews through the holes to create images that might look like someone’s cut wound healing, or how wood looks after it gets damaged and begins to repair itself.

“I try to make threads come to life in a different sense,” Calderón said. “Not just them being stitches or anything, (but) trying to mimic what the threads can look like if you put them all together next to each other.”

Calderón has a history with Wave Hill, working with the garden’s public programs in 2006. She’s excited to be back.

“To be here in a whole other capacity as an artist and being supported and given space and time,” she said, “it’s as good as it gets.”

It’s also given her a chance to draw inspiration from the different barks and bark patterns she encounters in the garden.

While many people have responded to Calderón’s work by saying, “Really?” she’s not afraid to further explain her process.

“I tell people it’s sort of combining the masculine and feminine, and I really love that in my process,” she said.

“I’m very much a tomboy, and embroidery is this delicate, wonderful thing. If people know me, I’m a little impatient.

“But the embroidery is so meditative, and I sit there for hours at a time.”

For artists like Nandini Chirimar, memory plays a huge role in her art.

Japanese paper and woodblock printing are Chirimar’s primary tools when it comes to creating multiple pieces at once. Since the start of Winter Workspace, she’s worked on drawing plants inspired by Wave Hill’s succulent greenhouse, and plays around with layering techniques as well as effects such as watercolor and thread.

Throughout her time at Glyndor Gallery so far, Chirimar has noticed how being in close proximity with other artists has altered the way she thinks about her craft.

“Automatically, you see their work, you think about it, you engage with them,” she said. “Here are all different viewpoints, so you think about your work and it grows and changes.”

And it’s inspired her to keep creating.

“You start getting new ideas,” she said. “All the weeks I’ve been here, I think have culminated into something has changed me and changed my work.”

Like Chirimar, the past plays a significant role in Armita Raafat’s work, but she’s also looking ahead to the future.

Raafat’s work focuses on looking at 10th century Islamic art in another light using all sorts of colorful fabrics in order to ask questions. It’s a way to “reimagine it in another space and another time, far away from its origin of creation,” she said.

One of Raafat’s major questions she explores through her work is whether this reimagining would lose the weight of Islamic history or “will that weight of history be continued?”

But she doesn’t expect to find that out any time soon.

“I don’t think these are kinds of things you can answer in one year or two years,” Raafat said, “specifically dealing with a form that has a baggage of history of Islamic architecture.”

Raafat came to Wave Hill looking for space and an in-depth field for her to create as opposed to the claustrophobic feeling she said she felt working on pieces in Manhattan.

As Winter Workspace winds down in a few weeks, Raafat acknowledges it’s important for her that she be inspired to take a new direction in her work, and maybe learn a new thing or two.

“I’m waiting for the residency to finish to absorb everything,” Raafat said, “and I’m sure you leave a different place richer than before and with new knowledge.”