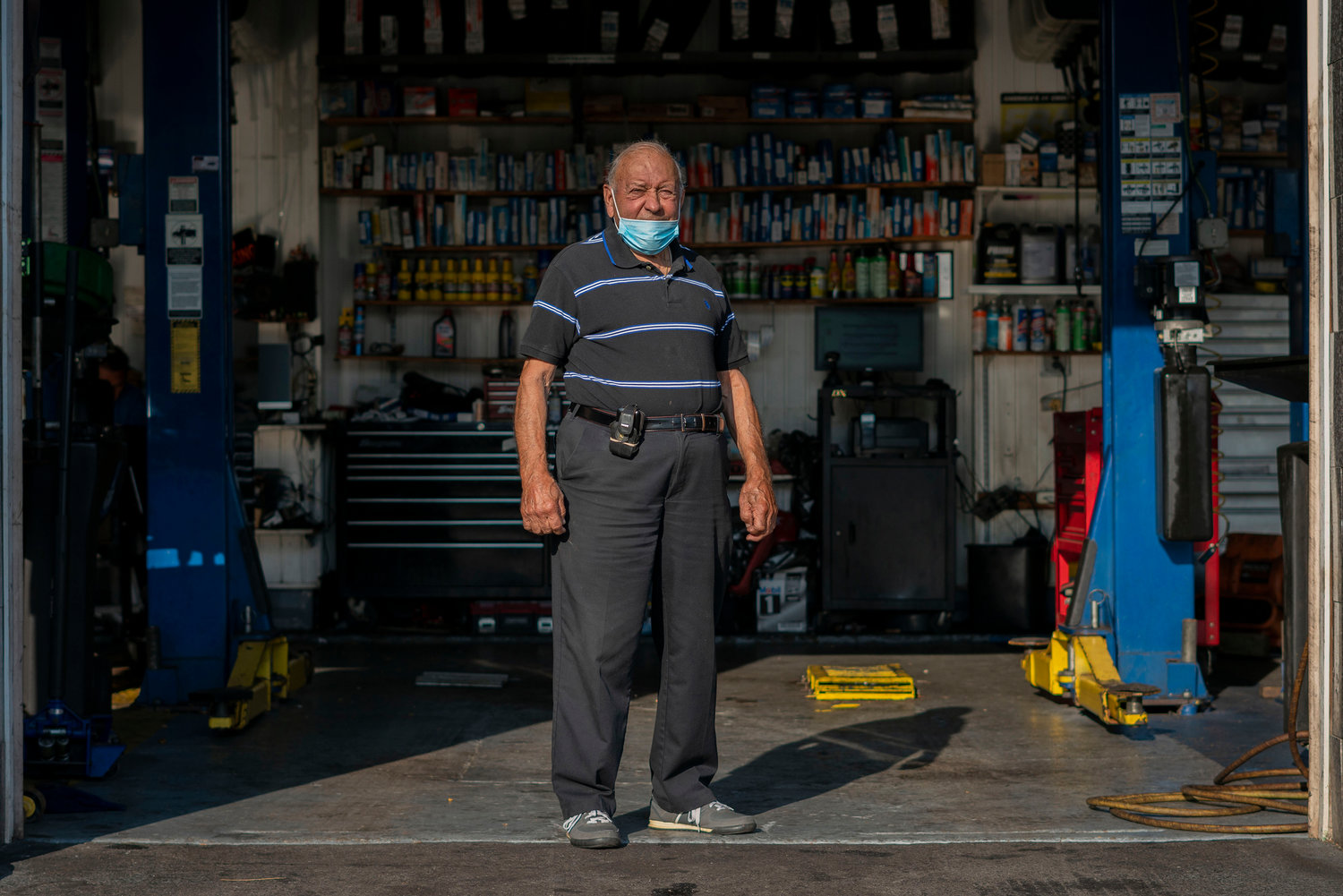 During the coronavirus pandemic, Jimmy Packes provided free car maintenance to frontline workers at the Riverdale Auto Clinic. Packes, who also ran Kingsdale Service Center right across the street for some 40 years, died in December. He was 83.
HIRAM ALEJANDRO DURÃN / File 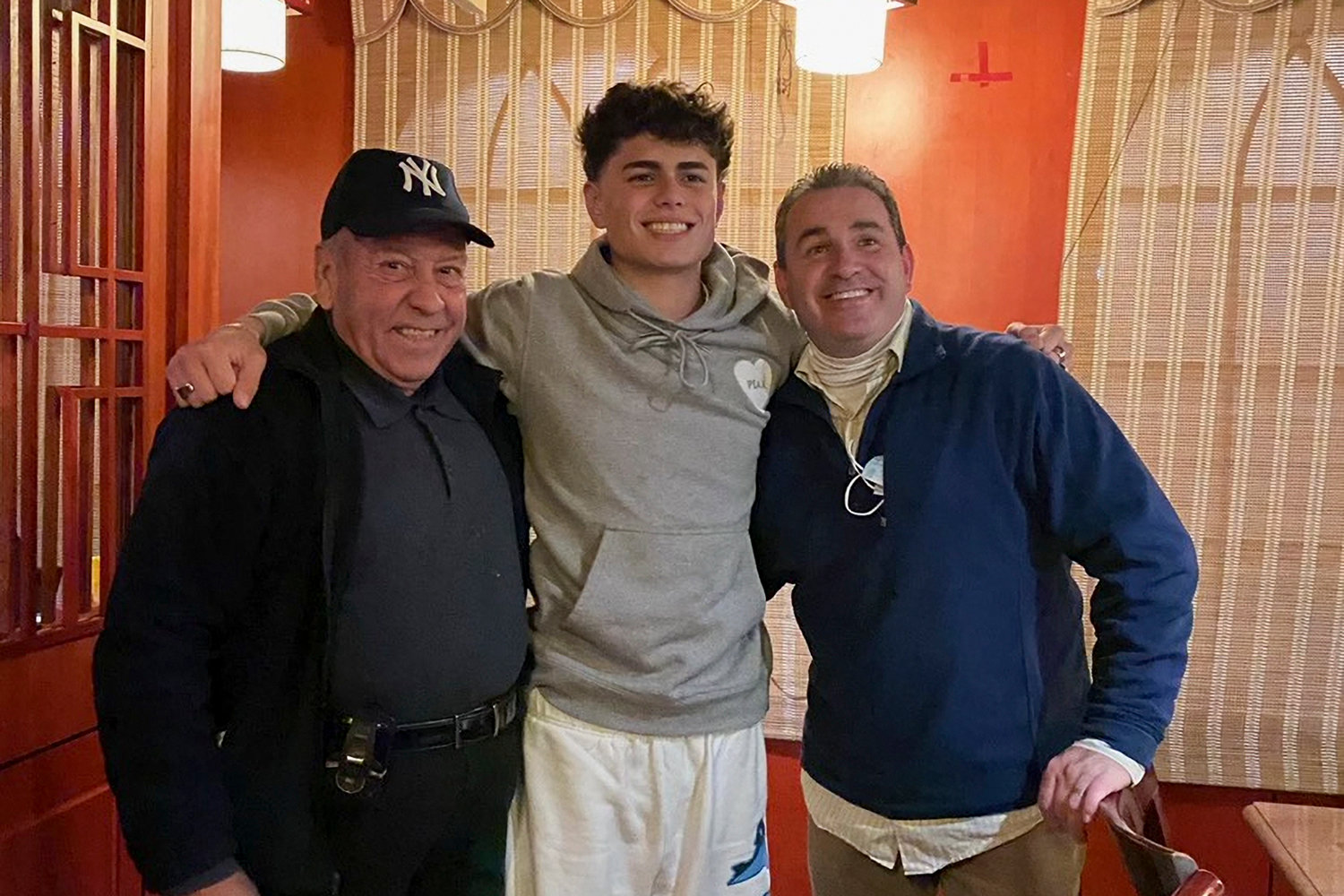 Joey Furlong, right, spends time not only with his son, but also his ‘surrogate’ father Jimmy Packes. Furlong worked with Packes at Kingsdale Service Center on Tibbett Avenue and West 230th Street for about a decade. Packes, who was later a fixture at Riverdale Auto Clinic just across the street, died last month at 83.
Courtesy of Joey Furlong
Previous Next
By ETHAN STARK-MILLER

For more than a half century, if motorists in this corner of the Bronx needed their car serviced, they knew to take it to Jimmy Packes.

Whether it was a routine oil check or an engine overhaul, drivers could count on Jimmy.

For most of his life, Jimmy ran the Kingsdale Service Center — a full-service Exxon gas station that once sat at the corner of West 230th Street and Tibbett Avenue. After selling Kingsdale in the mid-1990s, Jimmy spent much of the remainder of his career working at the Riverdale Auto Clinic right across the street.

Mike Packes described his father as so passionate about car repair, he worked right up until the day he died.

“He passed in his sleep,” Mike said. “I ended up getting the call to check on him. And I know my father. I knew right then and there something was not right. If somebody’s got to check up on him, something’s wrong.”

Although Jimmy’s work life was concentrated in this corner of the Bronx, he lived in Rockland County. It was there, in the village of Wesley Hills, he and wife Dorothy raised their four sons. Dorothy died in 2008.

Jimmy’s sons all grew up working at the service station, Furlong said. And two of them have stayed in the business. Mike runs his own body shop in Nyack, while his brother Dennis runs a Cadillac and Chevrolet dealership.

Furlong first met Jimmy in the 1980s when he was 13 and looking for a neighborhood job he could work when he wasn’t in school. Jimmy obliged, hiring Furlong for a weekend shift at Kingsdale. The two had worked together since.

When Furlong’s own father died just a couple years after starting at the garage, Jimmy stepped up to support him. It was there he became more than just Furlong’s boss.

“He took me in like I was his son,” Furlong said. “Like an adopted son. And he always told people, ‘My son will take care of you.’ And he just made me feel thankful and proud to be a part of his family.”

Jimmy always emphasized the importance of taking care of customers at Kingsdale, providing them with complimentary services.

“If a customer needed anything, he always gave the service that they wanted,” Furlong said. “He always said, ‘You meet them. You greet them. You check their oil. You put the air in their tires if they need it. You wipe their windows. Everything here is full-service.’ And if you didn’t do it, he would say, ‘Listen I don’t expect you doing anything else but the right job.’”

Although Furlong became closer with Jimmy than most others, he was hardly the only neighborhood kid who worked at Kingsdale. Jimmy instilled the values of hard work and service in all the young men who passed through his shop over the years, Mike said — many of whom went on to successful careers in a variety of professions.

“My father took a lot of people under his wing,” Packes said. “And he made a lot of good businessmen, doctors, even up to a two-star general. I mean, he’s developed quite a few good men out of that place.”

Jimmy was born in 1938 into a family that had already been in the service station business for three generations. He started working in his family’s station at East 207th Street in Norwood when he was just 7.

Jimmy’s family wanted him to be a doctor, Furlong said — something he was pursuing until he joined the military. But when he came out of the service, Jimmy realized he loved the auto repair industry too much to do anything else. 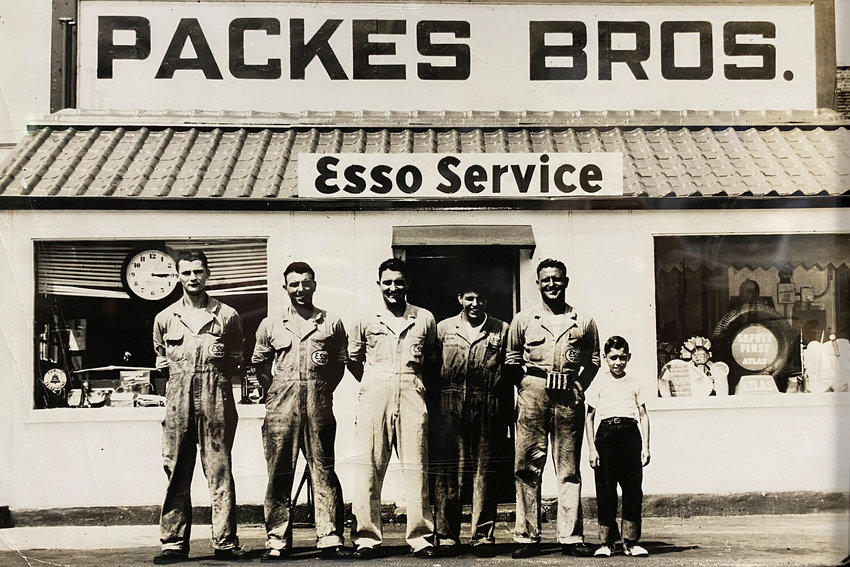 Jimmy Packes stands next to his father, three uncles and cousin in front of the family’s old car service station in Norwood. Packes, who ran the …

Then in the late ‘50s — when Jimmy was in his early 20s — he became part owner of the Kingsdale Service Center with original owner, Joe Paglia.

Under Jimmy’s leadership, Furlong said, Kingsdale grew into the only Exxon station in the area that had a 24-hour gas station, car repair, tow service and convenience store. At the height of the station’s success, more than 70 people worked there.

“Jimmy was basically one of the guys that ran the whole operation,” Furlong said. “They called him ‘the general’ because he always had the red hat with the four stars on it.”

Besides his great service, Jimmy also was known for showing kindness and compassion toward people who were down on their luck. In one instance, Mike said, a woman who had very little money came into the shop with her two children after her car broke down on the highway.

“So, my father put her up in a hotel,” Mike said. “Picked her up in the morning, brought her back to her car. My father washed the bill out and gave her money to get home.”

Jimmy was also recognized by The Riverdale Press in its Living in Riverdale magazine as an “unsung hero,” after he extended free car maintenance to frontline workers at the height of the coronavirus pandemic.

“We have doctors and EMS workers and firefighters — we took care of their vehicles, took care of inspections, flat tires, oil changes, whatever they needed,” Jimmy told The Press at the time. “They were doing a great job for us, so we wanted to reciprocate it.”

Furlong wants to memorialize Jimmy’s impact on the community by getting the stretch of Tibbett Avenue where Kingsdale once stood ceremonially named after him.

“Because (the) guy put his time in for seven decades to help all these people in this community, and give them jobs, and watch all of these people prosper and live a good quality life,” Furlong said. “He’s that great guy that always gave you that great advice. And always told you to do the right thing.”