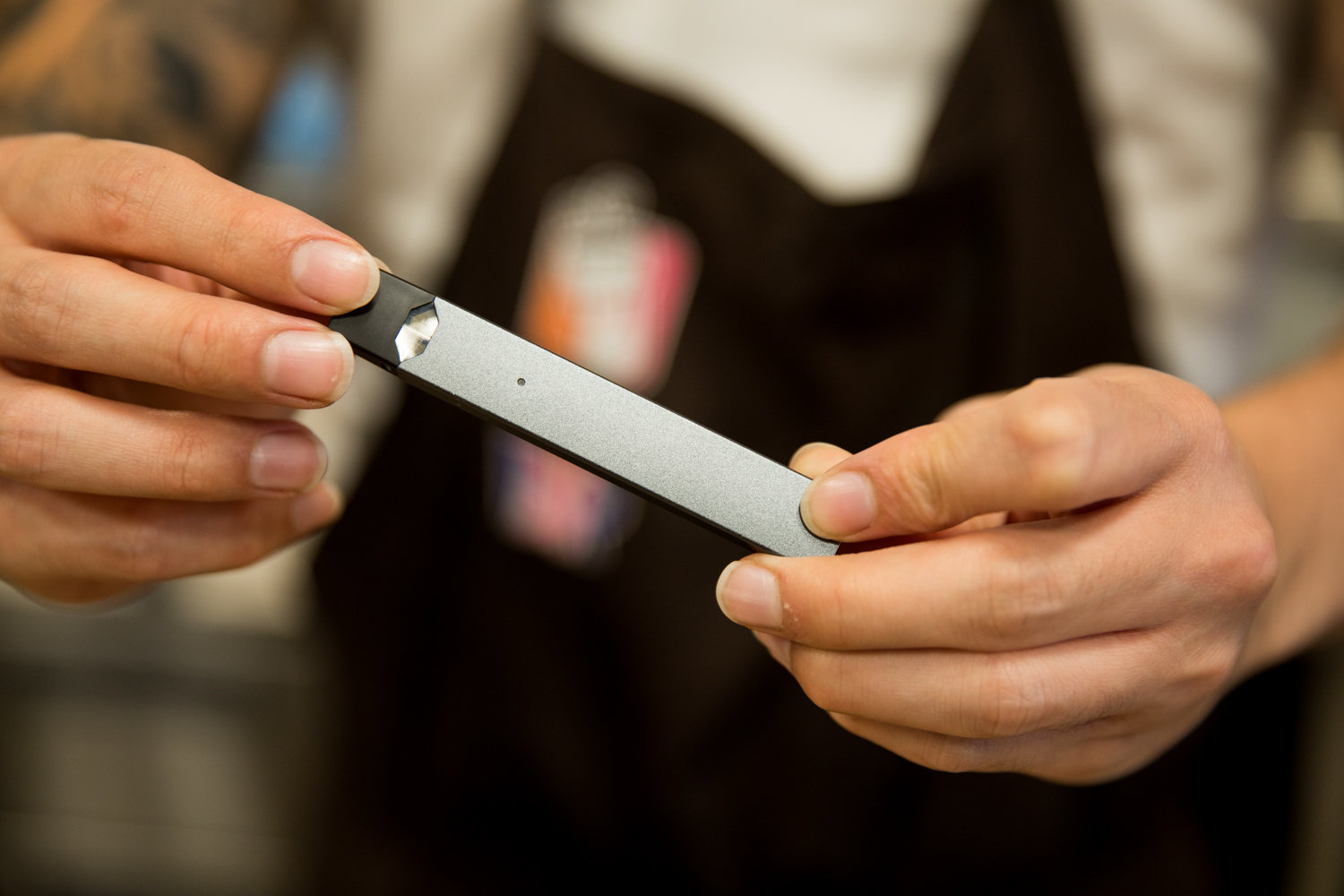 Electronic cigarette makers like Juul have come under fire for a string of vaping-related illnesses and deaths to the point where the Trump administration is considering a ban on flavored e-cigarettes.
JULIUS CONSTANTINE MOTAL 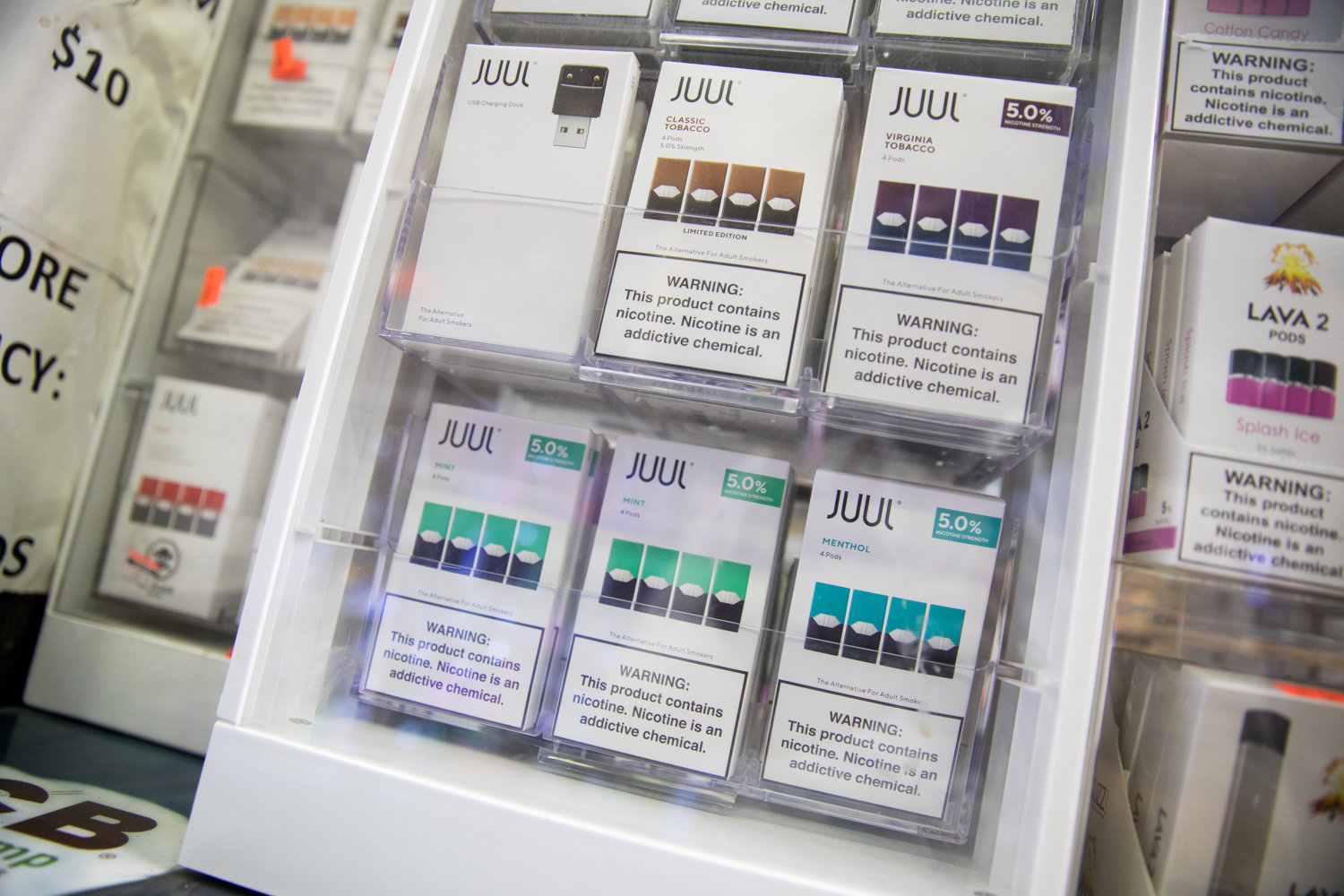 A surge in teenage use of electronic cigarettes has been blamed on companies offering a cascade of flavors, like vanilla and cherry. After six people died from reportedly vaping-related causes, the Trump administration is considering a ban on flavored e-cigarettes.
JULIUS CONSTANTINE MOTAL
Previous Next
By HEATHER J. SMITH

When Sammy Gonzalez heard six people died and hundreds more nationwide were recently diagnosed with a mystery illness reportedly linked to vaping, he stopped reaching for the Juul electronic cigarette in his pocket.

“I stopped smoking cigarettes because of the Juul,” Gonzalez said. “It was the best alternative. I tried everything else and it didn’t work. Juul’s the only compact nicotine hit that’s comparable to a cigarette.”

And it’s also highly addictive, he said. On a typical sidewalk, one may notice the presence of e-cigarette users by the puffs of fruity, delicious vapor they pull from little electronic pens. Many turn to vaping when they’re trying to kick cigarettes. Some liquid contains nicotine to sooth cravings. Others contain THC — the chemical in cannabis that produces a high. Or both.

E-cigarettes have been on the market since 2003, but the latest reports are the first time they’ve been linked to severe lung damage. Patients have reported shortness of breath, persistent coughing, chest pain, vomiting and fever, according to reports.

Although e-cigarettes are the likely source of the illness, doctors aren’t sure specifically what chemical or component is to blame.

One potential culprit is a substance known as vitamin E acetate, as are other cannabinoid compounds, according to Dr. Simon Spivack, a pulmonologist at Montefiore Health System and a professor at Albert Einstein College of Medicine.

E-cigarette products from reputable companies are generally safe, Spivack said. But the current epidemic of illnesses has prompted health officials to issue public warnings to stop using any vaping products until scientists can pinpoint what causes the lung damage. A “very active investigation” could determine if all flavored liquids are contaminated with the mystery substance, or if it’s only liquid from black market sources.

Lawmakers, too, have taken action. Nationally, President Trump has called for a ban on flavored vaping liquid. Gov. Andrew Cuomo subpoenaed makers of alleged black market vaping liquid, and called for the immediate ban on its sale. U.S. Rep. Eliot Engel commended the Centers for Disease Control and Prevention for quickly condemning the use of flavored liquid in e-cigarettes.

“These are dangerous tobacco products, and it is the federal government’s responsibility to ensure that they do not fall into the hands of children,” Engel said in a statement.

Joining them was Juul — the company responsible for some 70 percent of the total e-cigarette market — highlighting the “need for aggressive category-wide action on flavored products.” But the FDA has warned Juul for its marketing to youth.

Some people claim the fun flavors entice young users. Vape shops often stock a wall filled with a variety of candy- and fruit-flavored liquids in colorful packaging. At least one study revealed high school students were five times more likely than adults to use e-cigarettes. More than a quarter of high school students statewide vape, and health experts believe vape liquid flavors are to blame.

“My little brother told me the kids at (Riverdale/Kingsbridge Academy) are vaping their butts off,” Gonzalez said. “That’s what’s causing these problems.”

If kids are using e-cigarettes and don’t have the money to buy liquid from reputable sources, they may turn to knock-offs with questionable ingredients, according to Spivack. Those liquids could contain chemicals that don’t appear on any ingredients list, and are not tested by regulators to ensure they’re safe.

The push to ban all but the basic flavors like tobacco and menthol compound other restrictions that make it hard for people old enough to smoke to buy the products, according to Sam Alsaedi. His family runs Riverdale Candy and Vape Shop and Delicious Delight, both on West 231st Street.

“If there’s a ban, a lot of businesses are going to shut down because a lot of people depend on this stuff, you know?” Alsaedi said. “Like, smoke shops basically only sell tobacco. And do you know how many tobacco shops there are in New York City? There are so many. Like, every block you go, you’ll see a tobacco shop.”

Many e-cigarette users understand that. Contrary to how some have marketed it, vaping isn’t free of hazards, Gonzalez said.