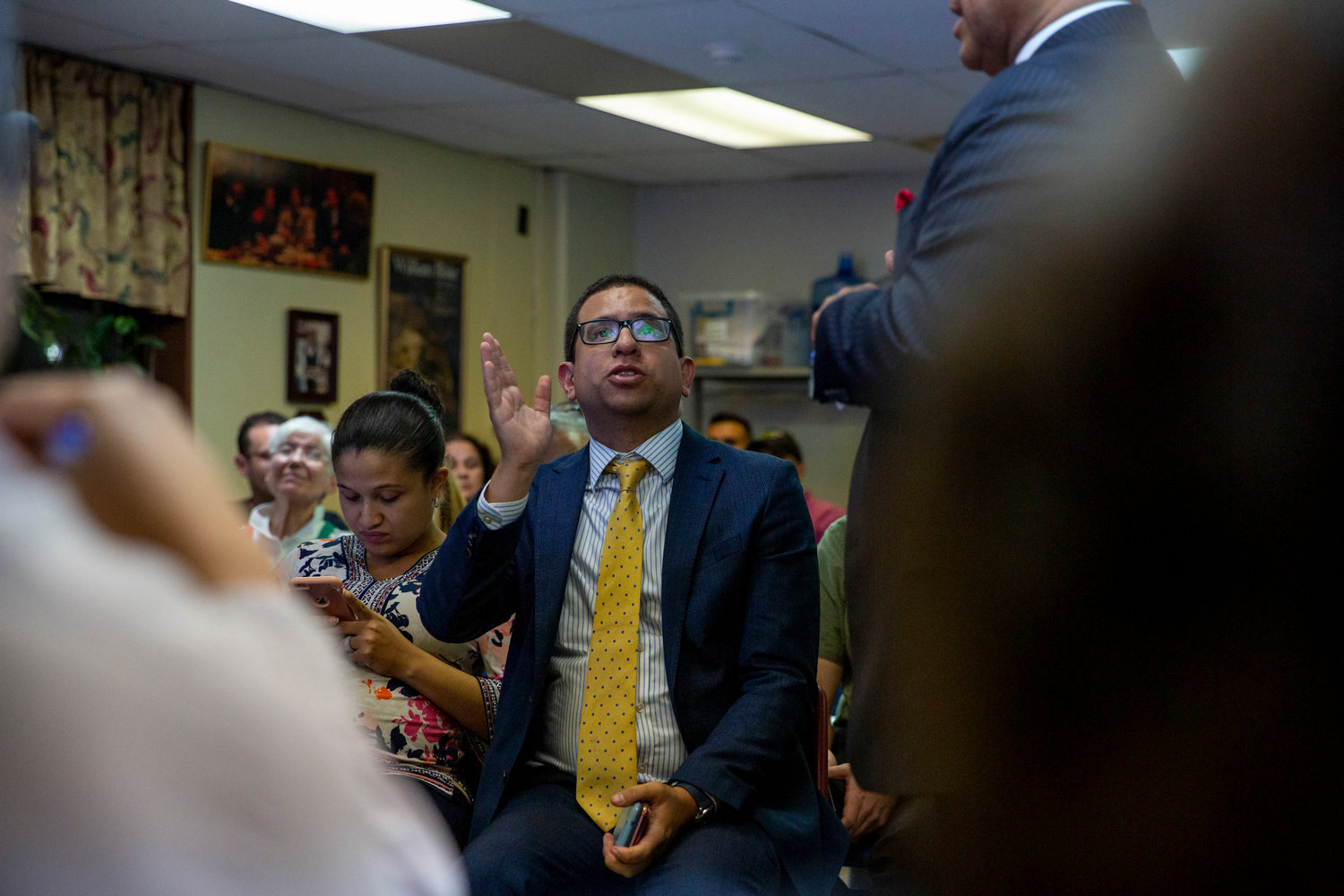 From the Bronx to Albany, Nivardo Lopez takes the helm as the state’s new deputy secretary of transportation under Gov. Kathy Hochul. Past boss and former Bronx councilman James Vacca credits Lopez as someone who knows how to bring stakeholders to the table.
EIAN KANTOR/ File 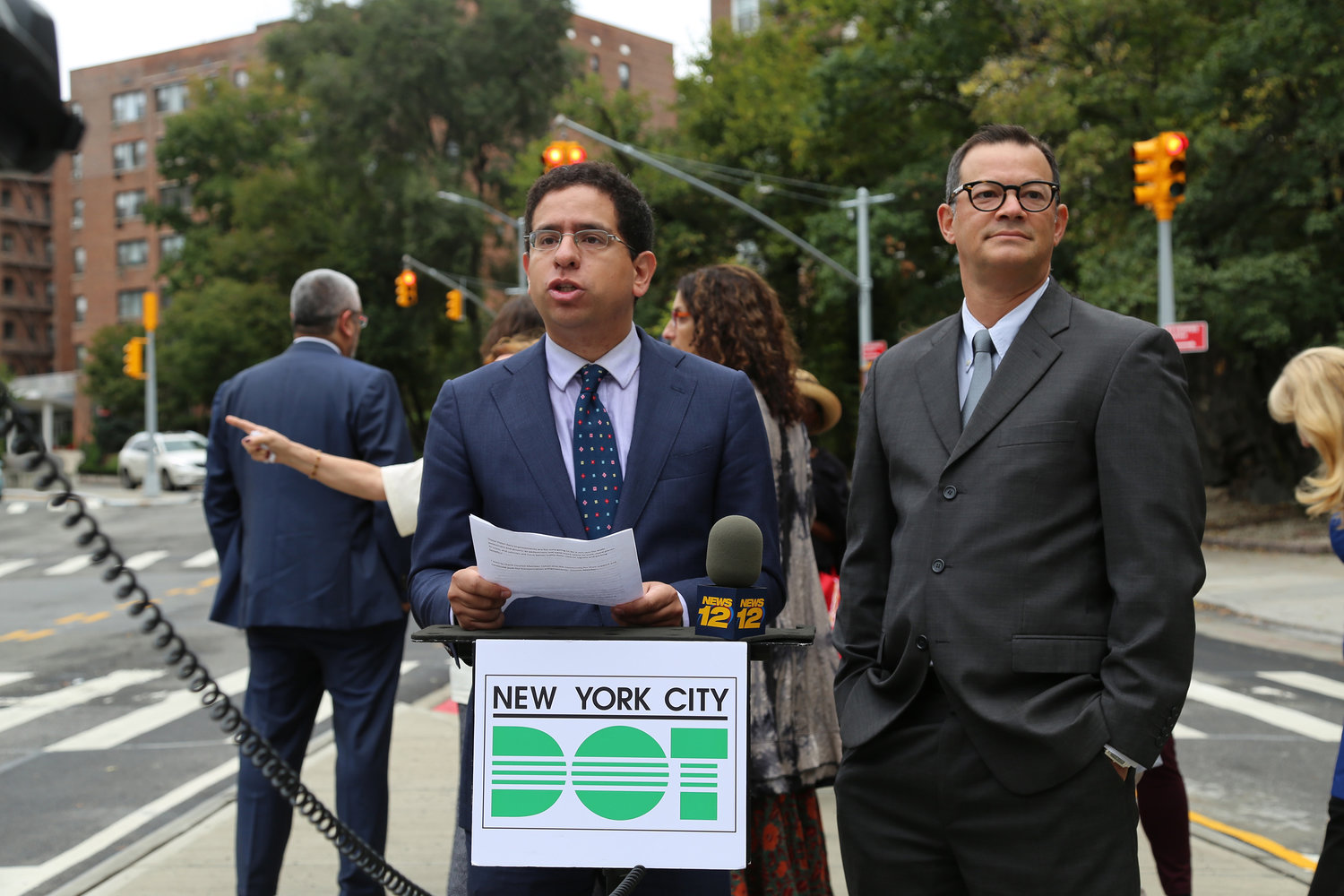 New state transportation deputy secretary Nivardo Lopez was the Bronx borough transportation commissioner at the city level for more than six years. Lopez recalls fondly working closely with Community Board 8, even when more contentious matters sometimes made that relationship a rocky one.
Courtesy of New York City Department of Transportation
Previous Next
By SARAH BELLE LIN

New York has a new transportation deputy secretary. And not only is he from the Bronx — he’s got roots in the northwest Bronx.

Nivardo Lopez just spent the past six years as the Bronx borough commissioner of the city’s transportation department, leaving it only to take on this new statewide role offered by Gov. Kathy Hochul. But while his work will put him at the center of everything happening in Albany, Lopez has no plans to leave his native borough quite yet.

“I’m actually not moving,” Lopez said. “Instead, I will be splitting time between the Midtown office and then going up to Albany when the need arises.”

As news broke about his new statewide appointment, Lopez’ now-former colleagues at the city DOT praised him for his work with bicycles, buses and e-bikes. Hank Gutman — who leads the city agency under Mayor Bill de Blasio — issued a statement praising Lopez’s “great work” and noted his agency was “sad to see him leave.”

While Citi Bikes has been slowest to arrive in the Bronx and Staten Island, Lopez says he was very much involved in ensuring the public bicycle rental service made its way to the outer boroughs besides Brooklyn and Queens — particularly to the south Bronx. Still, it’s going to take a while before the service really makes it way into this corner of the borough.

That pilot places chargers in a number of locations, including along Broadway between West 231st and West 238th streets.

Despite its continued controversy, Lopez remains proud of the two-way protected bicycle lane on Broadway the city completed in 2018, which he believes has been successful in increasing cycling in that stretch of the northwest Bronx while calming “the dangerous road on Broadway.”

He also pointed to work the city did along the East 161st Street corridor near Yankee Stadium introducing Select Bus Service and the city’s first center-running bus lane, which Lopez said “has really improved travel times for folks in the Bronx.”

He also hopes the next administration continues the city’s Better Buses Action Plan, aimed to improve bus speeds by 25 percent by adding new bus lanes, installing traffic signals that will give buses priority through intersections, and expand bus lane enforcement, among other things.

Over the last couple of years, Lopez worked closely with other city agencies and the Metropolitan Transportation Authority on what is known as the Penn Station Access Project, intended to bring more Metro-North stations to the east Bronx. That will expand access to not only downtown for many living along that corridor, but to the greater tri-state area as well.

“This is one project that I’ve been involved in for a very long time, before I was even at DOT,” Lopez said. “It’s going to be a huge transformative project for residents of east Bronx to get to Midtown Manhattan.”

Lopez started his long career in city government under then Bronx city councilman James Vacca. The two worked together during a very active time for the council’s transportation committee at City Hall, passing 23 bills.

“Nivardo has a history of bringing people to the table,” Vacca said. “He has a history of working out what seems to be a complex issue and coming with solutions. It’s especially good for the Bronx. He knows every neighborhood and all of their concerns. You can’t underestimate the value of having someone from the Bronx in such a position.”

And while Vacca is no longer on the city council, he still wants Lopez to keep some key Bronx projects in mind working under Hochul, emphasizing ferry service that could provide transit options in and out of the borough.

“Can the state play a role in expediting those types of projects?” Vacca asked. “Can we get traffic on our highways to actually move a little better, so that our neighborhoods in the Bronx that already suffer with high asthma rates can see those asthma rates come down? These are the issues I would like the state to look at.”

The intersection at Kappock Street and Palisade Avenue remains a fresh issue as a push for better pedestrian safety led DOT to narrow a portion of Kappock. This move faced backlash by neighbors who claimed it created traffic bottlenecks, making that area even more dangerous.

“I did not expect two years ago that the project will be as controversial as it has become,” Lopez said. “You have to balance the needs of what people believe is best for their local community with broader needs of our transportation network. Finding the sweet spot is often challenging.”

For now, Lopez says the city is doing its best to re-evaluate what was done at the intersection — and if modifications have to be made — to make sure those changes have the “optimal result.”

Lopez himself leans on the city’s buses to take him from where he lives in Woodlawn to his children's day care in Bedford Park, and his parents’ home in Kingsbridge.

“I’ve had always heavily depended on mass transit,” Lopez said. “I’m the father of two young kids. I’m very excited to eventually help them learn how to ride bicycles and use the protective lanes that’s been built in the boroughs throughout the city.”

Keith Kalb — the deputy borough commissioner under Lopez — will now temporarily assume his boss’ old role. Elevating Kalb — who has spent nearly 15 years with the transportation department after beginning his career with the city’s education department — was a decision made by both Gutman and his first deputy commissioner, Margaret Forgione. A more permanent replacement will be decided by the new Eric Adams administration early next year.

“It’s important that whoever is the borough commissioner next uses the immense resources that they have within the agency and the office,” Lopez said. “To continue open dialogue with residents, community boards and elected officials of the Bronx to understand what people are seeing and what challenges need to be addressed.”

CORRECTION: Nivardo Lopez, the state’s new deputy secretary of transportation, lives in Woodlawn and generally takes the bus to Bedford Park, where his children attend day care. His parents live in Kingsbridge. A story in the Nov. 18 edition provided incorrect locations.