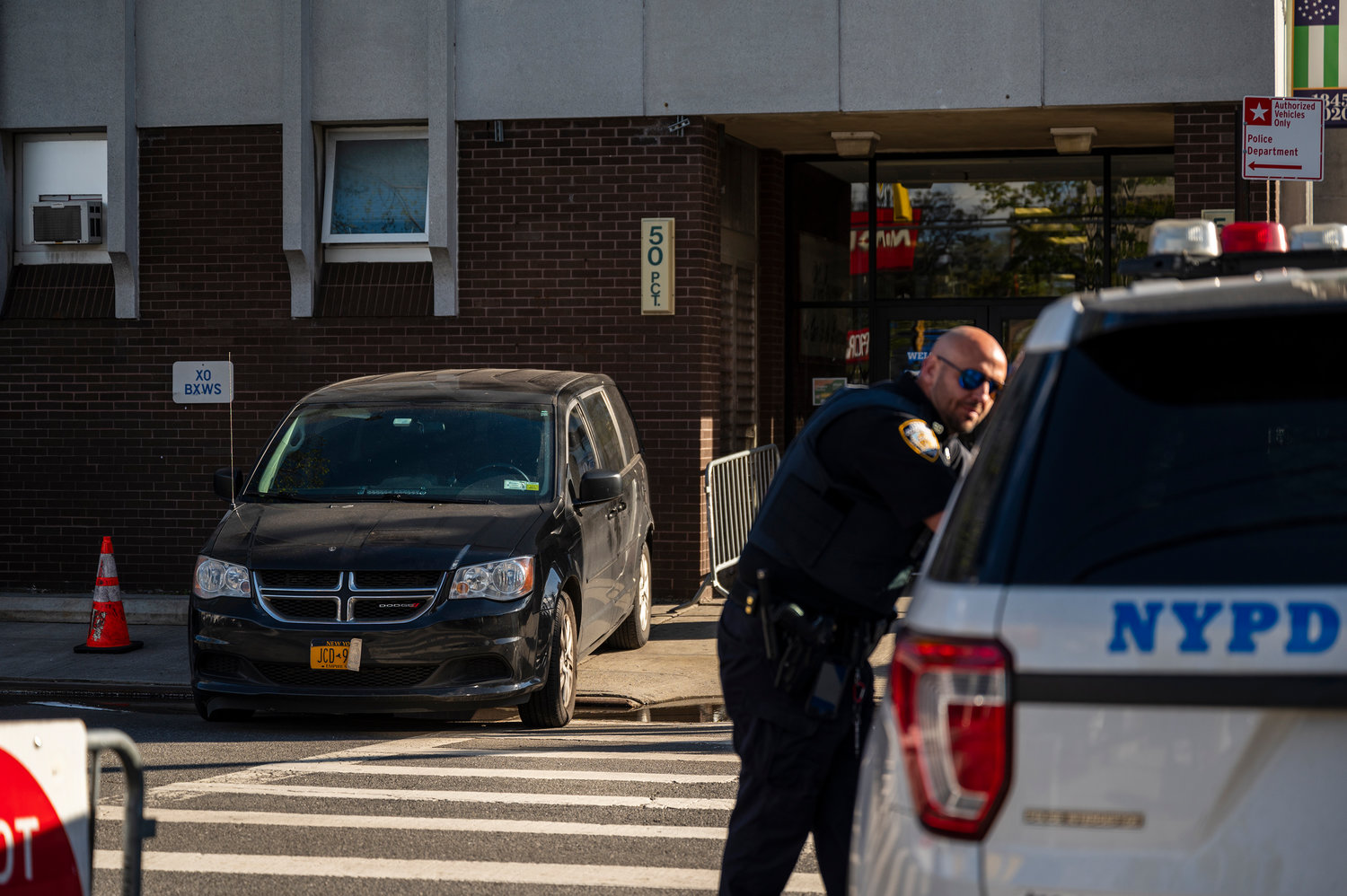 Some neighbors have complained cars parked on city streets have bent license plates they say could help avoid cameras that could use the information on the plate for speed ticketing or for highway and bridge tolls. This particular van is parked near the front entrance of the 50th Precinct. A Deputy Commissioner Public Information spokesperson said it was an unmarked police vehicle.
Hiram Alejandro Durán 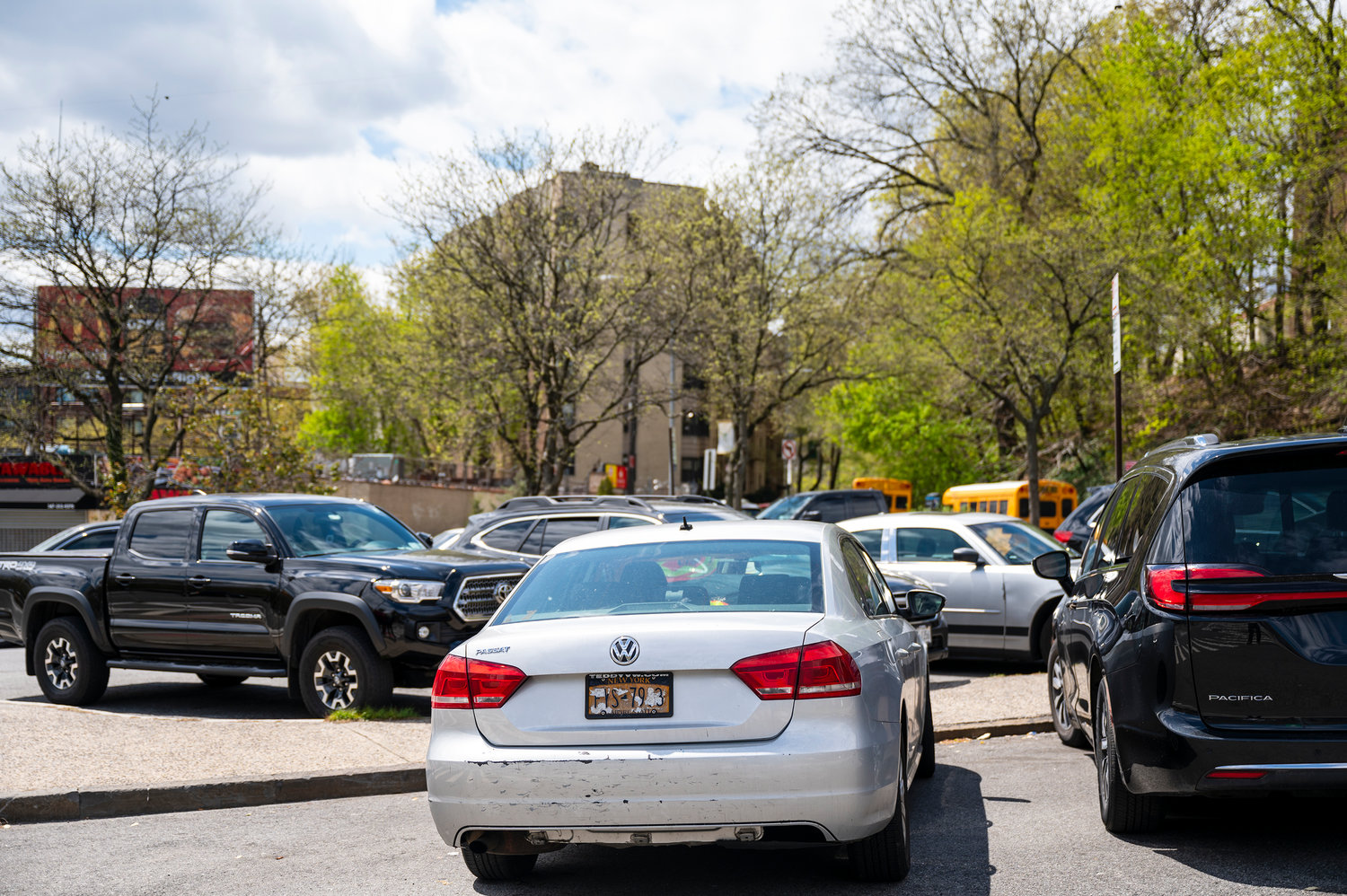 There are a number of cars locally with license plates that some say have been intentionally scratched or painted over that could ultimately make it difficult, if not impossible, to be identified.
Hiram Alejandro Durán
Previous Next
By STACY DRIKS

Using everything from paint to cardboard and opaque coverings — and sometimes even tree leaves — a small handful of drivers have defaced their license plates, in what some critics say is an effort to avoid paying bridge and tunnel tolls, while also avoiding being captured by speed and red-light cameras.

But it’s the toll aspect that has the attention of the Metropolitan Transportation Authority, claiming it’s cost the agency at least $50 million in revenue over the past couple of years. So much so, in fact, that on May 1, the agency in charge of bridges, tunnels and subways created a blue-ribbon panel with the hopes of reducing the number of toll evaders of the vehicular kind.

Daniel DeCrescenzo Jr., president of MTA Bridges and Tunnels, says the panel also will discuss how to team up with law enforcement, primarily by cracking down on drivers who intentionally deface their license plates.

But some transit advocates claim that might be a hard sell, since many of the vehicles where such unauthorized license plate alterations seem to be found is in and around those very law enforcement precincts.

The MTA initiative aims to educate people that avoiding tolls by covering their plate or buying a fake one is not acceptable.

“Some people think if they buy a license plate on Amazon for 50 bucks that says ‘Jersey Girl,’ they can put it right on their vehicle,” DeCrescenzo said. “That is illegal.”

Social media is filled with alleged license plate defacers, more locally through a Twitter account known as PlacardAbuse, which aims to expose such activity to its more than 10,000 followers. The person or group behind the account has not identified themselves.

Drivers became especially creative during the coronavirus pandemic to avoid both toll and speeding cameras by placing a blue surgical mask over a license plate, critics claimed. A leaf was attached to one plate that covered two numbers to try and avoid attention.

“The 50th Precinct stands out because of its long history of folding over the license plates on department vehicles,” the Twitter account told The Riverdale Press. “This is a long-standing pattern of misconduct” that predates current precinct commanding officer Charles Girven, “but it was getting better until he arrived. Then the NYPD went right back to driving around with unreadable plates.”

A 50th Precinct spokesperson could not be reached for comment on the allegations.

The MTA’s goal is not to find criminal solutions, but instead civil penalties not administered by police to crack down on the evasion, according to MTA chief executive Janno Lieber. He believes if something isn’t done soon, the MTA could face a fiscal cliff as early as 2026.

The MTA police are better equipped to go after toll evaders because they are positioned near the toll cameras, said Gersh Kuntzman, editor-in-chief of transit advocacy group StreetsBlog NYC.

Steven Bodzin, who works as a reporter for Kuntzman’s blog, demanded the MTA release tolling system data back in 2019.

The authority finally fulfilled that request, which StreetsBlog published for the first time last week.

It found 762,000 drivers are billed on the Henry Hudson Bridge, and close to 2 million on the RFK Bridge between March and September of 2018. Another 101,000 license plates were unintentionally obstructed, the MTA concluded, while another 17,000 were obscured on purpose.

The MTA did not say how it defined unintentional and intentional plate obstruction.  Yet, those same officials stress the number of drivers who defaced or had obstructed license plates on their vehicles while driving through tolls was less than 1 percent of the total traffic going across the bridge.

When a car passes through a New York City toll without an E-ZPass transponder — which pays the toll instantly — the MTA sends request tickets to the state’s motor vehicles department to receive the driver’s mailing address information. From there, bills are sent, usually charging a higher toll, and processing fees.

“We used to have toll booths, which would require everyone to slow down and come to a full stop and pay the toll directly with cash or pay the toll with E-ZPass,” Donovan said. “Then the gate would come up, and you’d be able to proceed from there.”

As a way of harnessing new technology, electronic and cashless tolling allows motorists to drive through the tolls without having to stop as the E-ZPass transponder communicates with the gates at full speed. For those without transponders, cameras take pictures of license plates.

Eve Kessler, a longtime resident, takes her walks through the streets of Kingsbridge and along Broadway. She can’t help but notice the high number of defaced plates she sees in her neighborhood.

“There is no place here where you can hide anything from me.”