MTA's plans to cut express service is on hold — for now

With just months to go before its Bronx redesign, some local bus lines could see small changes 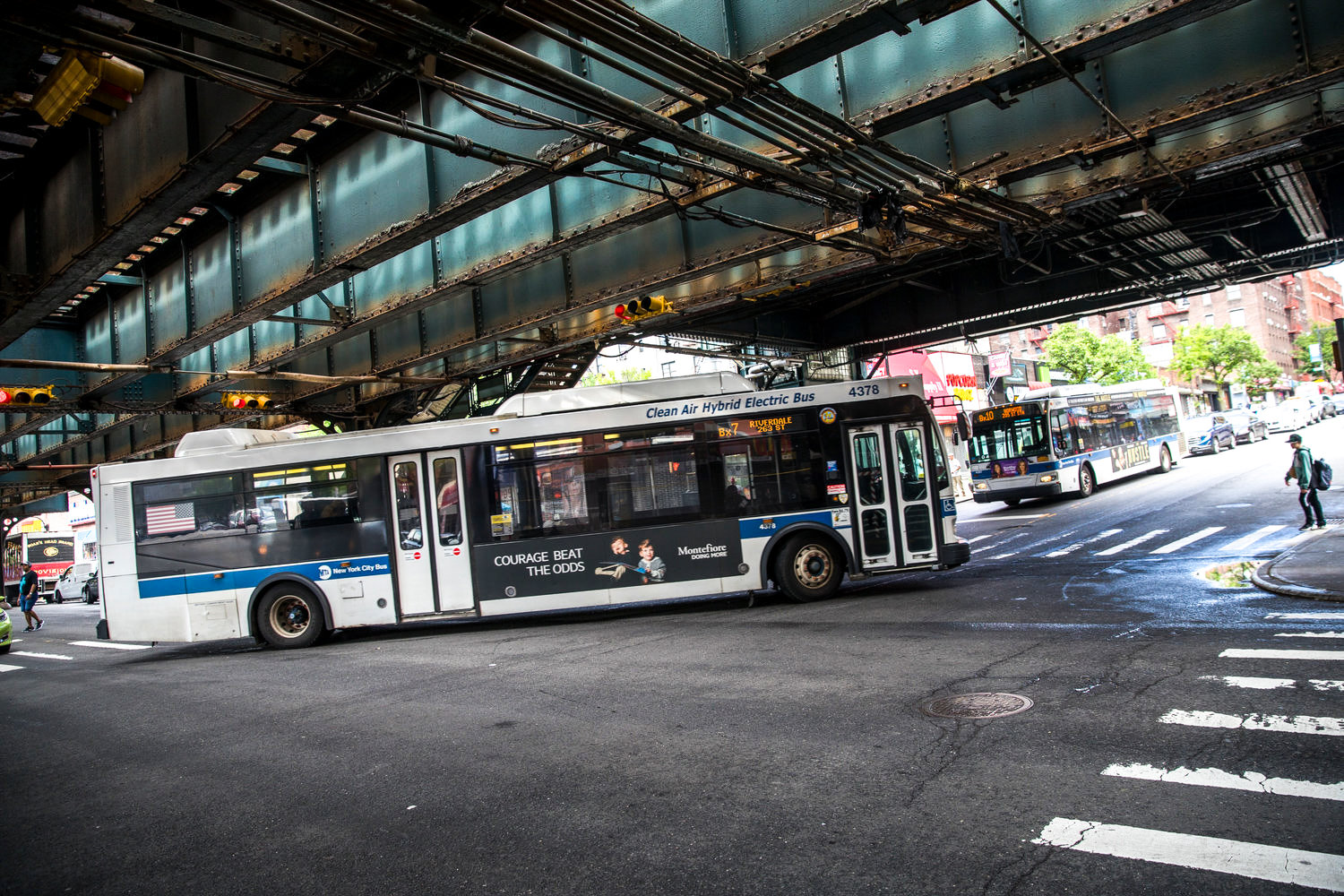 For the past four years, the Metropolitan Transportation Authority has promised to simplify its local and express bus systems. While the Bx7 is not expected to see any major changes, commuters expressed the need for improved bus frequency — and less crowding.
JULIUS CONSTANTINE MOTAL / File 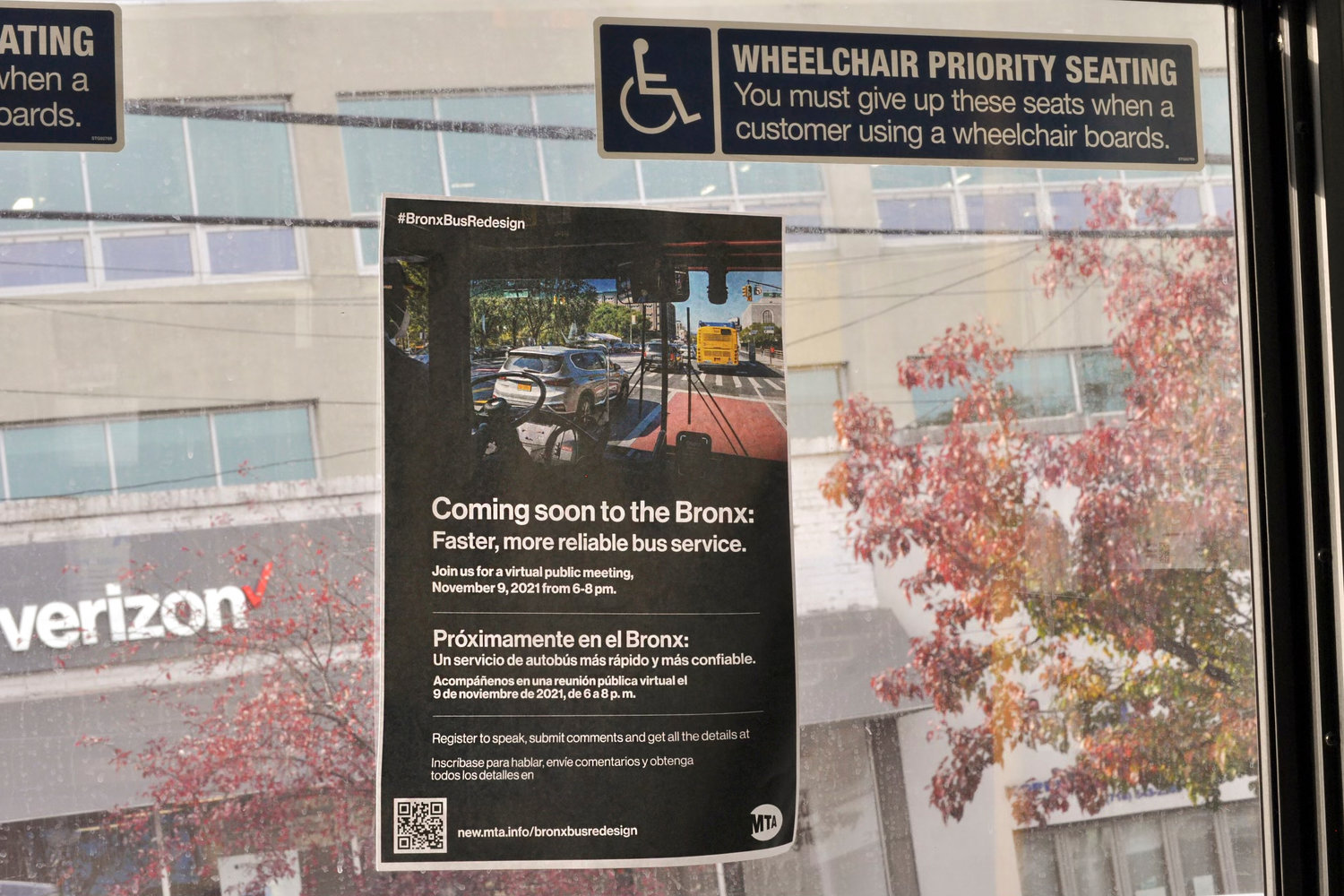 The Bronx Bus Redesign Project — which the city hopes will speed up mass transit times in New York’s most northern borough — should be ready to roll out changes next summer. The Metropolitan Transportation Authority says it’s put a lot of stock in what riders told them they need in order to get from one point to another without a car.
SARAH BELLE LIN 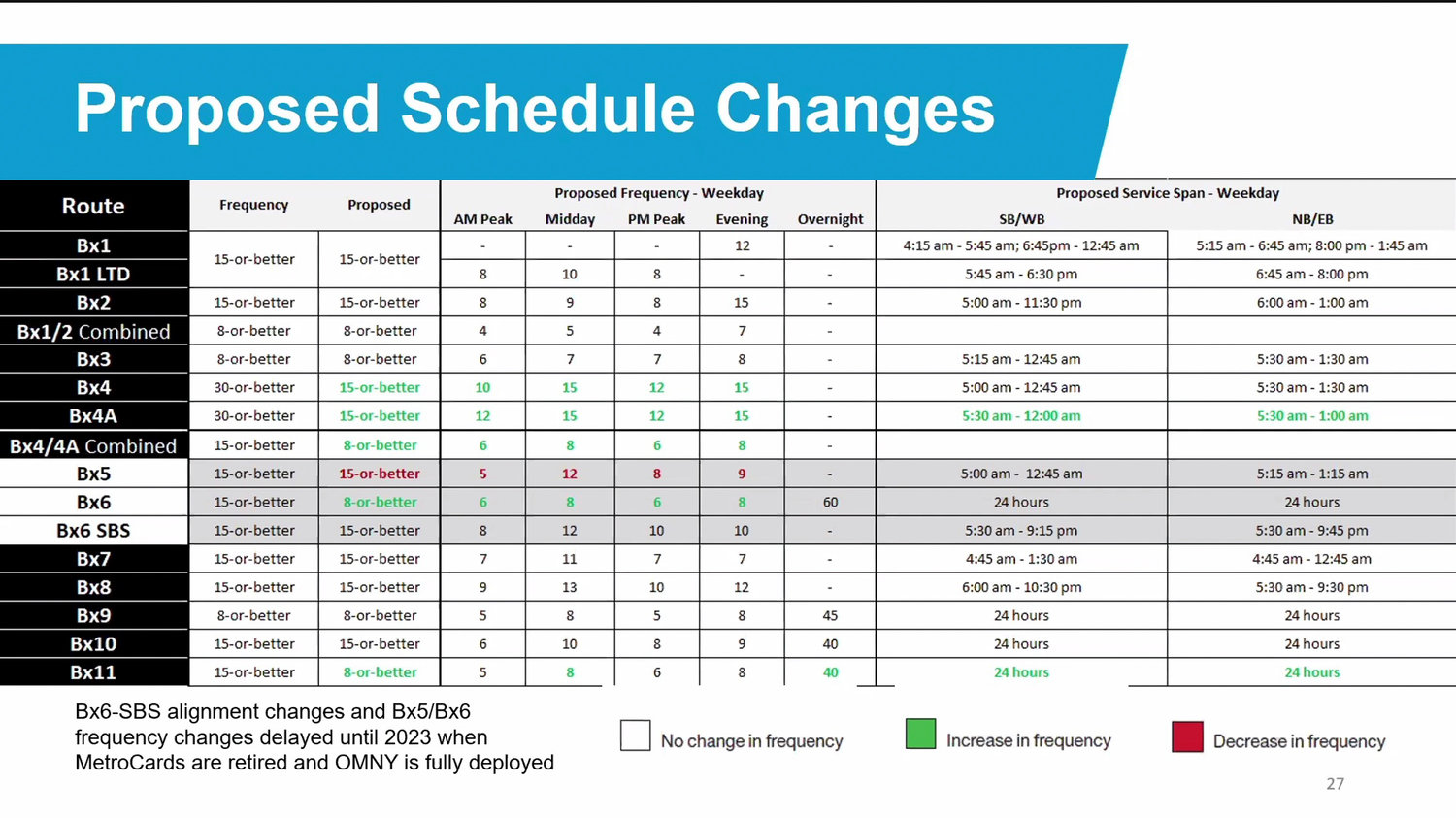 As delays on changes to express buses keep riders on the edge of their seats, the city’s Bronx Bus Redesign Project promises a simpler system on the local service level. The Metropolitan Transportation Authority is set to implement some changes in this neck of the woods, primarily with Bx10 service.
Courtesy of Metropolitan Transportation Authority
Previous Next
By SARAH BELLE LIN

It’s clear where many stand on the proposed cuts to express bus service proposed by the Metropolitan Transportation Authority here in the Bronx. Those changes are delayed — for now.

And what remains unclear is how well-received — or not — the MTA’s plan to nix more than a dozen local bus stops along the Bx10 and Bx7 lines will shake out.

Removing those stops could improve how fast buses move, since it increases the average distance between stops by about a third of a football field.

Although the Bx7 stops on the chopping block are across the Harlem River, it’s the Bx10 line where many more locals are concerned.

The MTA wants to remove stops at 2735 Henry Hudson Parkway W., in Spuyten Duyvil, and another in Norwood.

And, of course, the MTA wants the city to create zones of dedicated bus lanes — something that has met with fierce opposition from business owners, like those along Broadway just north of Marble Hill, who say they will lose valuable parking space.

The MTA has moved a lot closer to implementing its new Bronx bus redesign project, but for Christopher Greif, he’s not concerned about losing a stop or two. He just wants to see more buses on the road.

In fact, at a recent meeting, Greif urged the MTA to “make sure that the Bx7 is running a little bit more frequently.” That helps not only senior citizens, he said, but also people with disabilities who use the Bx7 to commute to the hospital at West 168th Street.

As for express buses, it’s evident commuters want their voices and concerns heard. Joseph Morales is one of them. A sophomore at Bronx Engineering and Technology Academy at the John F. Kennedy campus, Morales takes the bus every day to school. He says he could get there faster if the MTA not only pushed for more dedicated bus lines, but also ensured service cuts weren’t made to the BxM2 that he depends on.

“I am upset with the cuts to express bus service,” Morales told MTA officials at a recent meeting. “I think the cuts to routes such as the BxM2 and BxM5 do not account for all passengers who need to travel to and from Manhattan hours beyond the morning and afternoon peaks.”

Patricia Nunez said the proposed cuts to BxM1 and BxM2 service — which connects North Riverdale near the College of Mount Saint Vincent to Lexington and Seventh avenues at 34th Street reminded her of how much Mount Sinai Hospital patients rely on those buses, and how they should continue to operate throughout the night.

“I don’t take the subway,” Nunez said. “My family doesn’t take the subway. It’s been a horrible year on the subway with violent crime increases, mentally ill people pushing people into the (tracks). We really need the BxM1 and BxM2 nighttime service to Manhattan.”

Nunez also pointed out that the BxM2’s route change taking it down the west side of Manhattan instead of Fifth Avenue “is very important for people in the neighborhood in the community” by taking them to Mount Sinai on Fifth Avenue and 98th Street.

“We are far from any subways,” she said. “We rely on buses to get to subways and the Metro-North. I see that there’s a huge congregation of buses that stop in Norwood, and it’s unclear to me why buses stop in Norwood and don’t continue on to Riverdale. This would allow people not only in my neighborhood to connect to Riverdale — where there’s a Target and other big box stores that people rely on, and also for many people to access the 1 train.”

Additionally, CB8 suggested several express bus stops to be restored at Mount Sinai as well as the Metropolitan Museum of Art and the American Museum of Natural History.

Yet, sometimes no news is good news. At least is the case for local bus lines in this part of the Bronx, which the MTA says it’s still committed to implementing changes officials believe will speed up service throughout the Bronx.

The goal is to now bring the final proposed plan — seemingly sans express bus changes — to the MTA’s board meeting next month, according to MTA deputy chief William Schwartz. He was joined at the recent meeting by MTA interim president Craig Cipriano as well as Bronx bus redesign project leads Dorian Statom and Jessica Cignarella.

“This virtual public meeting is the final result of years of public engagement and work with communities across the Bronx and upper Manhattan,” Cipriano said, with the hopes of making service faster and more punctual.