New York breaks another record in COVID cases, but there is hope

Hospital CEO: We could see this all peak next week 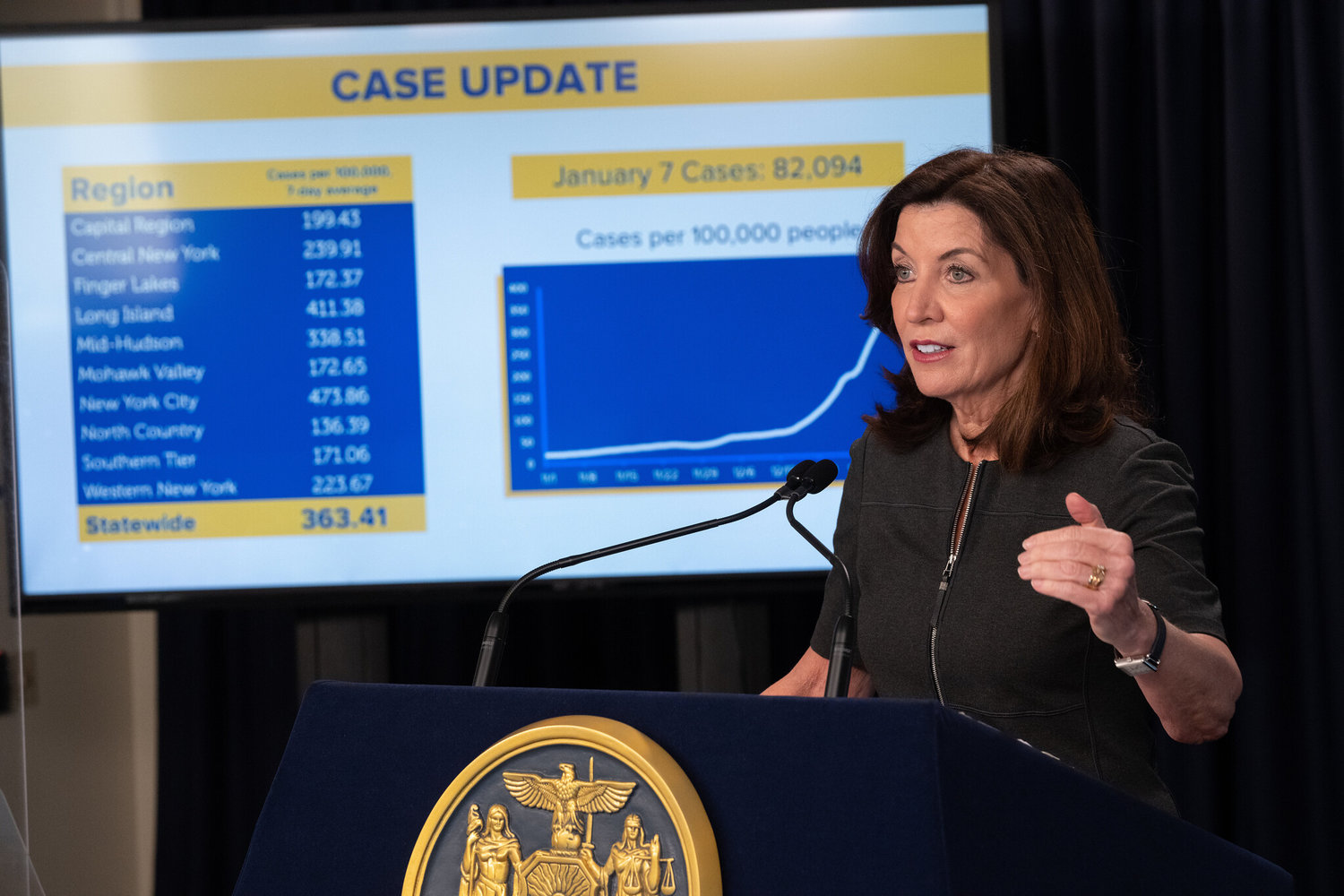 Although New York saw a record number of single-day new cases, Gov. Kathy Hochul believes we might be at the beginning of the end of the omicron variant surge.
Courtesy of Gov. Kathy Hochul/Don Pollard
By MICHAEL HINMAN

New York once again set a new high in the number of new COVID-19 cases in a single day, surpassing the previous record set Jan. 1. Yet, positivity rates as a whole appear to be flattening.

More than 90,100 positive coronavirus cases were reported in New York state on Friday, according to Gov. Kathy Hochul, bringing the total number of new infections since Dec. 1 to 1.35 million.  That's 7 percent of the state's total population.

The news comes a day after Hochul recommended booster shots for those between 12 and 15, as well as requiring booster doses for health care workers within two weeks of when they're eligible. She's also demanding both negative COVID-19 tests and surgical masks for nurses who visit health-vulnerable patients at home.

But even with record total numbers, Hochul told reporters Friday there was some significant silver lining. Primarily, the percentage of people testing positive in the state appears to be holding at about 22 percent. The Bronx — which has had the highest positivity rates in the state since Dec. 23 — has been slipping since its high of 28 percent on Jan. 4.

"It's not the straight up and down like an arrow as it was before," Hochul said on Friday. "I want to be cautiously optimistic about what that means, but we're not going to make any pronouncements other than that is a better trend line than we had been seeing up until now. So let's just state that. But every day that we can flatten that is going to be a good day."

Hospitalizations continue to climb to just under 12,000 in a state where beds can accommodate more than 34,600. But the number of people who require intensive care or to be connected to ventilators is not growing at the same pace.  More than 20 percent of those hospitalized required ICU on Dec. 15, while nearly 12 percent needed to be intubated.

But that's when just 3,700 beds were needed to treat COVID. In the most recent numbers released Saturday, just 13 percent needed ICU while intubations accounted for 6 percent of all hospitalizations.

While Hochul says she has to focus on upticks in COVID-related hospitalizations, she also is worried about how it impacts people needing the hospital who aren't there because of a coronavirus infection.

"The most number of people admitted for non-COVID reasons as of just (Thursday), or a couple of days ago, are in New York City," Hochul said. "It's about 50/50. So half of the hospitalizations in New York City are someone who needs to be there because of the severity of their COVID situation. And the other half are there for other reasons."

But those numbers change when Hochul looks upstate. Places like the Central New York region — where Syracuse is — has revealed 79 percent of those hospitalized are there because of coronavirus-related issues, the governor said.

Part of that, however, could be vaccination. More than 80 percent of New York City's total population has been vaccinated, according to numbers released by the governor's office. That's compared to 72 percent of the state overall.

"We currently have about 1,200 cases in our hospital system — very representative of most of the downstate hospitals," said Dr. Steven Corwin, chief executive of NewYork-Presbyterian Hospital. "We're about 20 percent higher than we were last year at this time, but much less in the way of cases in our ICUs, and must less in the way of cases requiring a ventilator. So we're very thankful for that."

But among those who are being admitted for COVID-related issues, Corwin revealed very few of them have had vaccine booster shots.

"The patients requiring the ICUs are older, sicker, and mainly unvaccinated," the hospital administrator added.

Unfortunately, the state has added 2,734 more deaths attributed to complications from the coronavirus since Dec. 1 — 147 of them from the Bronx. And that number has climbed significantly recently with 439 passing away statewide in just the last three days, 31 of them in the Bronx.

Corwin, however, hopes those numbers won't continue that high for long.

"I can't thank our doctors, nurses, health care workers for going through this yet again," he said. "But I'm cautiously optimistic. We think with our modeling that the peak will happen next week. We've also seen some leveling the past couple of days — fingers crossed — that that does represent a plateau."