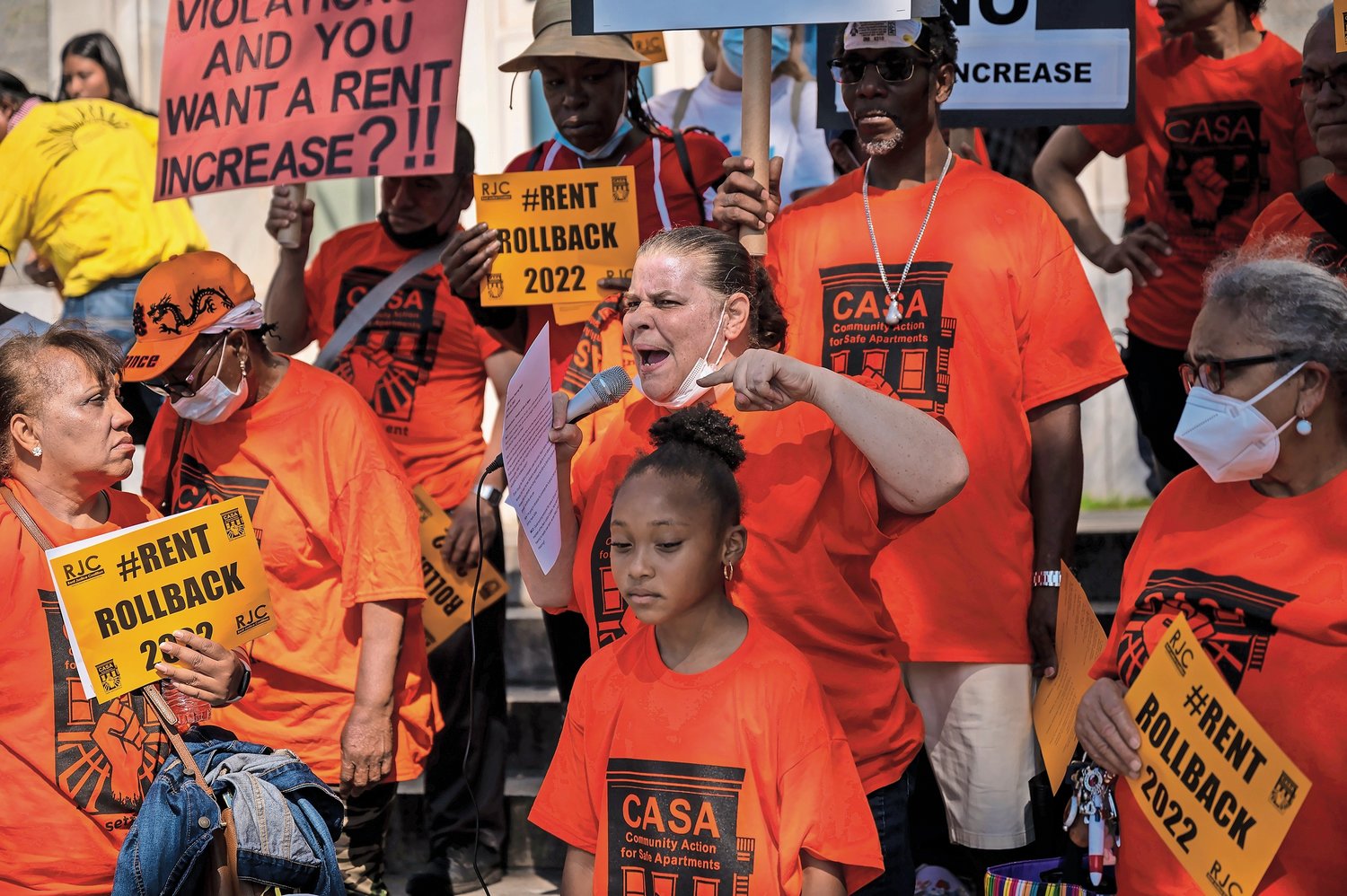 Rent regulated tenants and organizers from Community Action for Safe Apartments and Rent Justice Coalition gathered a stone's throw away from where the Rent Guidelines Board was hosting a public hearing on Wednesday, June 15.
Hiram Alejandro Duran 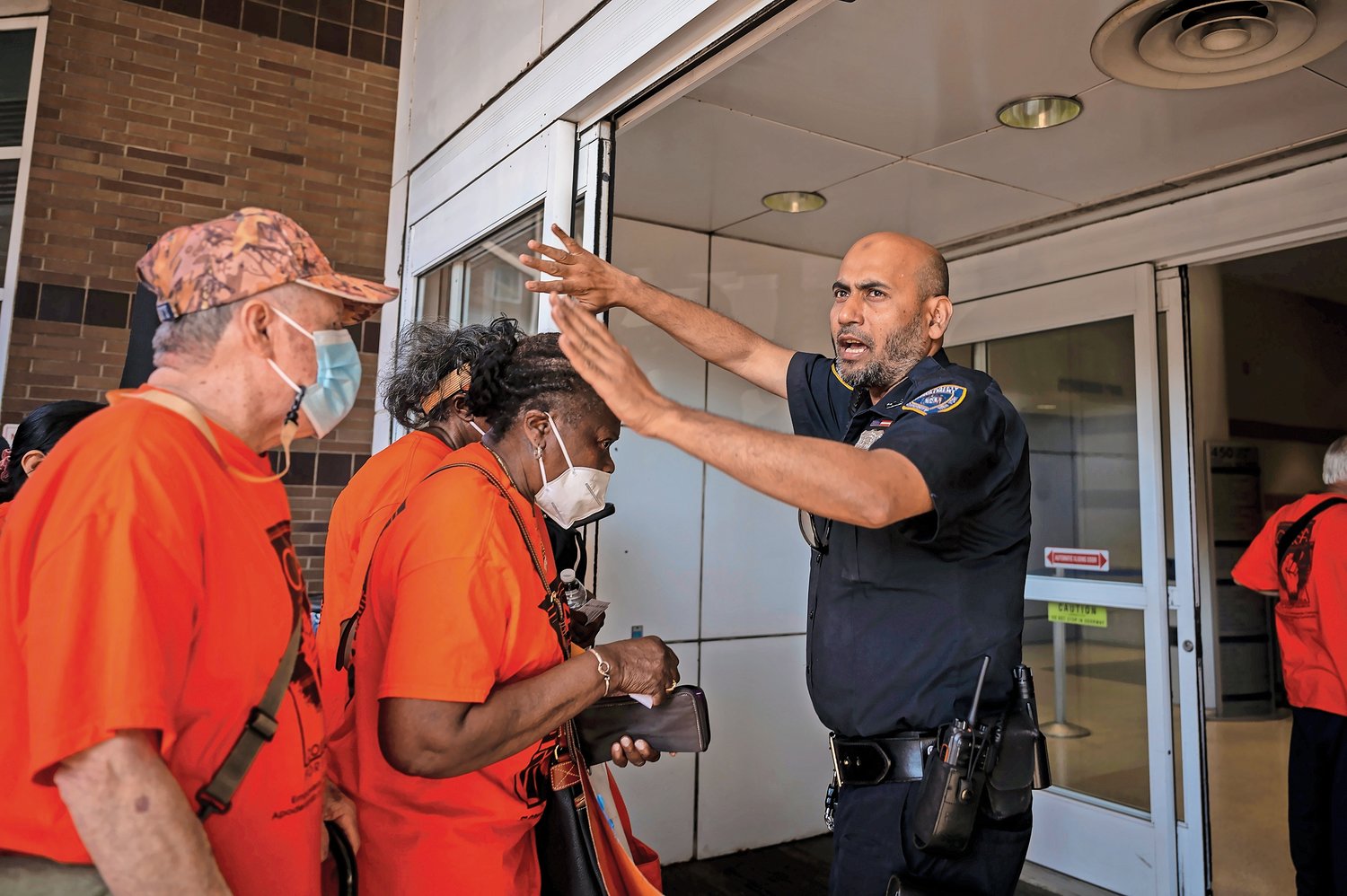 On arrival, rally members were urged to form a line to enter the Rent Guidelines Board hearing in small groups by Hostos Community College public safety officers.
Hiram Alejandro DurÃ¡n
Previous Next

What do they want from us? We can’t afford for the rent to go up.”
LINDA SEWARD, rent-stabilized tenant
By Abigail Nehring

The Rent Guidelines Board voted 5-4 Tuesday night to grant final approval to the biggest rent hike for rent-stabilized tenants in nine years. Rent for one-year leases will go up 3.25 percent and 5 percent for two-year leases.

Only six days earlier, rent-stabilized tenants converged on Grand Concourse to rally against the rent hike.

As the nine members of the Rent Guidelines Board—including three appointed this year by Mayor Eric Adams—made their way to the Hostos Community College campus in Mott Haven for the final public hearing, demonstrators gathered on the steps of the post office a block away.

The meeting was a rendezvous of members of tenants’ associations dotting the West Bronx and others arriving from Brooklyn, Queens and Manhattan.

The new rent guidelines proposed in a preliminary vote last month put rent-stabilized tenants on track this year for the biggest rent hike since 2013: 2 to 4 percent for apartments with one-year leases, and 4 to 6 percent for those with two-year leases. The adjustments apply to just over 1 million rent-stabilized units under the RGB’s control, representing about 44 percent of New York City’s rental stock.

In years past, the final figures have budged little from those initially proposed after a month-long period of fervent public debate.

It has been two years since the board heard in-person testimony on the cost of rent-stabilized apartments, a civic ritual that usually occurs every year in June, with high stakes for rent-regulated tenants who live paycheck to paycheck. For their landlords, tens of millions of dollars in rent revenue is on the line.

Linda Seward, who is retired and lives on a fixed income in a rent-stabilized apartment in the Bronx, said she has been coming to Rent Guidelines Board meetings for 17 years. “I’m already paying almost 40 percent of my income on my rent,” she said. “I’m going to food banks to try to save as much as I can.”

But the rent increase may force Seward to come out of retirement and get a part-time job. “What do they want from us?” she said. “We cannot afford for the rent to go up.”

About 50 people wearing the orange shirts of Community Action for Safe Apartments, a South Bronx organizing project, closed  ranks as city buses and emergency vehicles sped past. Others joined from Neighbors Helping Neighbors in Brooklyn and the Rent Justice Coalition. Many had handwritten statements to read in the hearing. Others planned to speak from the heart.

Kim Statuto, a CASA member who lives in a rent-stabilized apartment in Tremont, addressed the group in a booming voice. “We are here tonight because after two years of having to testify over Zoom, we are finally back at Hostos tonight for the RGB!” she began.

“The RGB always claims their decision to raise rent is neutral,” Statuto said. “We know we don’t get offered a seat at the table if we don’t demand it! And when we sit back, the landlords get to control the conversation, and continue to push their false narrative that the RGB is here to protect their properties. That ain’t right!”

The boisterous crowd cheered, with an energy that renters have brought to RGB hearings for years. “Housing is (a) human right! Fight! Fight! Fight!” they chanted as they marched across 149th Street toward the Hostos Arts & Culture Center. As the hearing got underway, they tucked their signs and bugles away and filed into the auditorium, where board members were seated behind a banquet table on stage.

Tenants fought for more in-person hearings this year, but two of the four public sessions were livestreamed.

In recent years, tenants have also persuaded the RGB to provide interpreters for people who want to testify in Spanish.

In the Hostos auditorium, CASA organizers ran their own simultaneous English-to-Spanish interpreting service. They passed out headsets from a card table in the back, behind the RGB’s own card table, which was stacked with literature.

An organizer winked as he reached into one of the boxes of equipment, “We basically run this meeting,” he said.

A series of public hearings in venues across the boroughs is the last chance for tenants and landlords to sway the RGB’s vote on a final figure. The rent adjustment is meant to simulate “fair” costs amid a housing emergency in which the market is driven by scarcity and speculation.

The figure the guidelines board arrives at is less a bellwether of fairness and affordability than the result of a compromise between its tenant and owner representatives. The two owners with seats on the board voted for an increase this year of 4.5 to 6.5 percent for one-year leases and 6.5 to 8.5 percent for two-year leases. They noted the rent freezes that were instituted during the pandemic and for two years during former Mayor Bill de Blasio’s administration.

Sheila Garcia, a tenant member of the RGB, said, “This is my ninth year on the board. Tenants are still struggling to survive. Landlords of rent-regulated buildings have been making record profits. Many public members and landlords pretend this isn’t true. Let’s look at our own data. On Page 3 of the income and affordability study, our report says between 2019 and 2020, net operating income fell 7.8 percent for buildings containing rent-stabilized units. It’s only decreased four times in 40 years. That means in 36 years, NOI has increased. Rent stabilization has been profitable and just fine.”

Board members disagree about how to use certain metrics in their deliberations, such as net operating income, which landlords insist is not the same as profit.

Research this year included an update to the NYC Housing and Vacancy Survey for the first time since 2017. The 2021 survey shows astonishing divergence between the boroughs on such crucial measures as the net rental vacancy rate, an indicator of a housing shortage required by statute for the city to keep rent regulation in effect. A vacancy rate below 5 percent generally indicates abnormal market conditions, likely to result in displacement and hardship.

The latest figures show that 10 percent of apartments in Manhattan are vacant, while in the Bronx, the rate is just 0.78 percent.

Rent-stabilized buildings are also more concentrated in the Bronx than any other borough, especially the neighborhoods along Grand Concourse, which have the highest percentage of rent-burdened tenants anywhere in the city, as well as the highest rates of eviction filings. Across the borough, 61 percent of all occupied apartments are rent-stabilized. Citywide, the figure is 45 percent.

The pandemic changed the tenor of the public testimony from years past, and the dramatic rent increases proposed this year lent it new urgency. City public advocate Jumaane Williams testified, as did Bronx borough president Vanessa Gibson, who co-sponsored Right to Counsel legislation for tenants facing eviction.

“Many, many tenants are struggling to stay afloat, and are on the verge of entering the shelter system and becoming homeless themselves,” Gibson said. “More than half of our working families here in the Bronx are rent-burdened. I want to urge the RGB to take immediate action to protect the Bronx.”

Seven public officials spoke out against the rent increases, including state Assemblyman Jeffrey Dinowitz and state Sen. Robert Jackson. But for five hours, it was the voices of tenants that prevailed — 55 in all — speaking in English and Spanish, and sometimes breaking into chants brought in from the street.

They spoke of their struggle to put food on the table and pay rent. They asked where their children would live, and pleaded for a rent freeze. One tenant broke into song.

They pointed to rising expenses, and warned of buildings becoming  dilapidated. “The stabilized housing stock is aging more and more every year, and yet building owners did not ask to be in this position,” Signorile said.

“It’s simple economics. The only way these building owners can keep up with annual expenses while ensuring that safe and adequate living conditions are maintained is through reasonable rent adjustments.”

It is true that rent stabilized buildings have more deficiencies like rodents, leaks, cracks, and broken plaster, and that the difference widened in the latest housing survey. In 2021, 53 percent of occupied rent-stabilized units had at least one major deficiency compared to 32 percent for market-rate units.