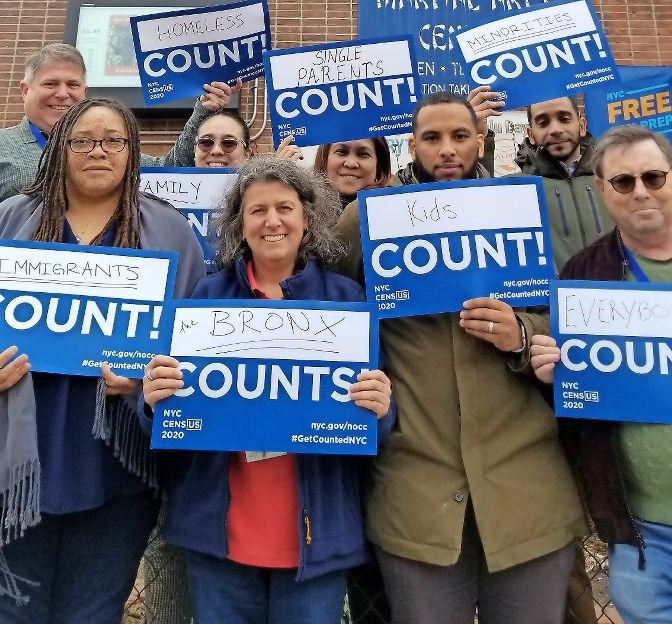 At a pre-COVID-10 gathering, Mosholu Montefiore Community Center taught program attendees about the importance of filling out the census form. Itself a recipient of city grant funds, MMCC has helped some 4,000 people fill out their census form, according to Lenora Sealey, the center’s program director.
Courtesy of Mosholu-Montefiore Community Center 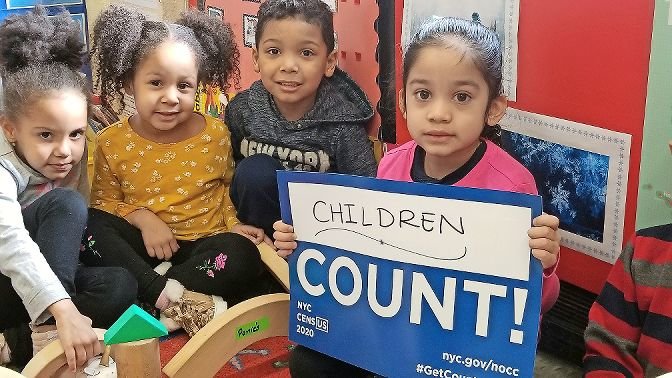 Children younger than 5 are one of the most historically undercounted groups, says Amit Bagga, deputy director of the city’s census office. Getting a correct count of school-aged children can impact the number of schools and seats available, but census plans were derailed by the coronavirus pandemic.
Courtesy of Mosholu-Montefiore Community Center
Previous Next
How can I get counted?

To fill out the census online, visit My2020Census.gov

For nonprofit organizations all over the city, the 2020 census was supposed to be the year’s big project. For the first time ever, New York City funneled millions of dollars into the decennial headcount of every single man, woman and child in the country.

That money was important, because during the last full census in 2010, the city’s self-response rate — or rate of households who responded on their own, without an in-person visit from a census taker — was only 62 percent.

When communities are undercounted, less federal money is spent there, officials said. With a significant enough undercount, seats in the federal government are at stake, like how many members of Congress could represent a specific highly populated area.

Of course, come early March, the coronavirus pandemic shut down all kinds of in-person activities. That threw the carefully planned projects of some local organizations, like Mosholu Montefiore Community Center, into disarray.

“We received over 4,000 completes, which means 4,000 people responded that they have completed the census,” she said.

The organization, which runs a food pantry among other services, has changed some of its outreach tactics. Part of that has meant reaching in, connecting with people when they come to MMCC for services, rather than reaching out to find those people.

“We’re working through the pantry also,” Sealey said. “So when people come in, we’re asking them if they filled out the census, and putting little notes in their bag.”

MMCC’s food pantry has seen a huge increase in activity, Sealey said, serving some 2,500 people per month, compared with 800 monthly before the pandemic. As the coronavirus economy continues to struggle and job losses stretch on, more and more people are in need of resources.

“It’s definitely really had an impact on people’s ability to pay for regular things they need for life,” Sealey said. “Like gas and electric, rent, those kinds of things.”

The community center secured some emergency funding to “help people over the bump,” ultimately handing out around 500 small cash stipends.

“Especially immigrants who are not entitled to any kind of stimulus, any kind of unemployment,” Sealey said. “Day laborers, and people working in hair salons, and things like that. All of those people lost their jobs very fast, and their families went into crisis very quickly.”

Resources to help people struggling during the pandemic could be part of programs funded by federal dollars — the same federal dollars directed by census numbers, said Amit Bagga, deputy director of the city’s census campaign.

“Government at all levels — local, state and federal — makes decisions about how to plan and how to spend money based on what they see as they need,” Bagga said. “Sometimes that need shows up in case numbers for COVID. But when you’re planning for the future, or figuring out how you’re going to address the needs that have arisen, all of that planning is based on census numbers.”

In more normal years, those needs might be the number of available affordable housing units in a neighborhood, or how much money gets allocated for road and infrastructure.

“A year or two ago when we had a measles outbreak in New York City, DOH was looking at census figures to understand what the vaccine needs are going to be,” Bagga said of the federal health department. “When you’re thinking about the number of school seats you need, you need to understand exactly how many school-aged children there are now, and how many school-aged children there are about to be.”

City schools, notoriously overcrowded, have been the subject of intense debate over reopening in-person come fall.

Spuyten Duyvil had the single highest response rate in the city, Bagga said, with Riverdale and Fieldston close behind. This year was the first time the city has dedicated any money at all to the census, he said, and that has resulted in significantly higher self-response rates in previously under-counted neighborhoods, including Williamsbridge.

With only a few weeks left until its funding runs out, MMCC is taking advantage of city-funded programs that allow them to run mass text messaging and phone banking campaigns.

An eight-person team was sending some 100 texts per day, said Amar Kahn, the center’s census manager.

“All they would have to do was click on the text message, and open it up to complete the census,” Kahn said. “And that was very effective, because they could do it on their own time. And we got a positive result, which was like a 62 percent completion rate on that.”

The team also made between 150 and 200 calls per day, Kahn said, mostly to the center’s clients, giving them gentle reminders about completing the census. He also hosted live Facebook events to drum up some interactions on social media.

While notes in the pantry bags and phone campaigns have been effective, Sealey hoped to have some limited in-person contact before the end of summer.

“We’re going to try to do some more foot outreach, if possible,” she said. “Maybe we’ll be able to do some in-person contact before all of this is over. We’re going to work until our funding runs out.”