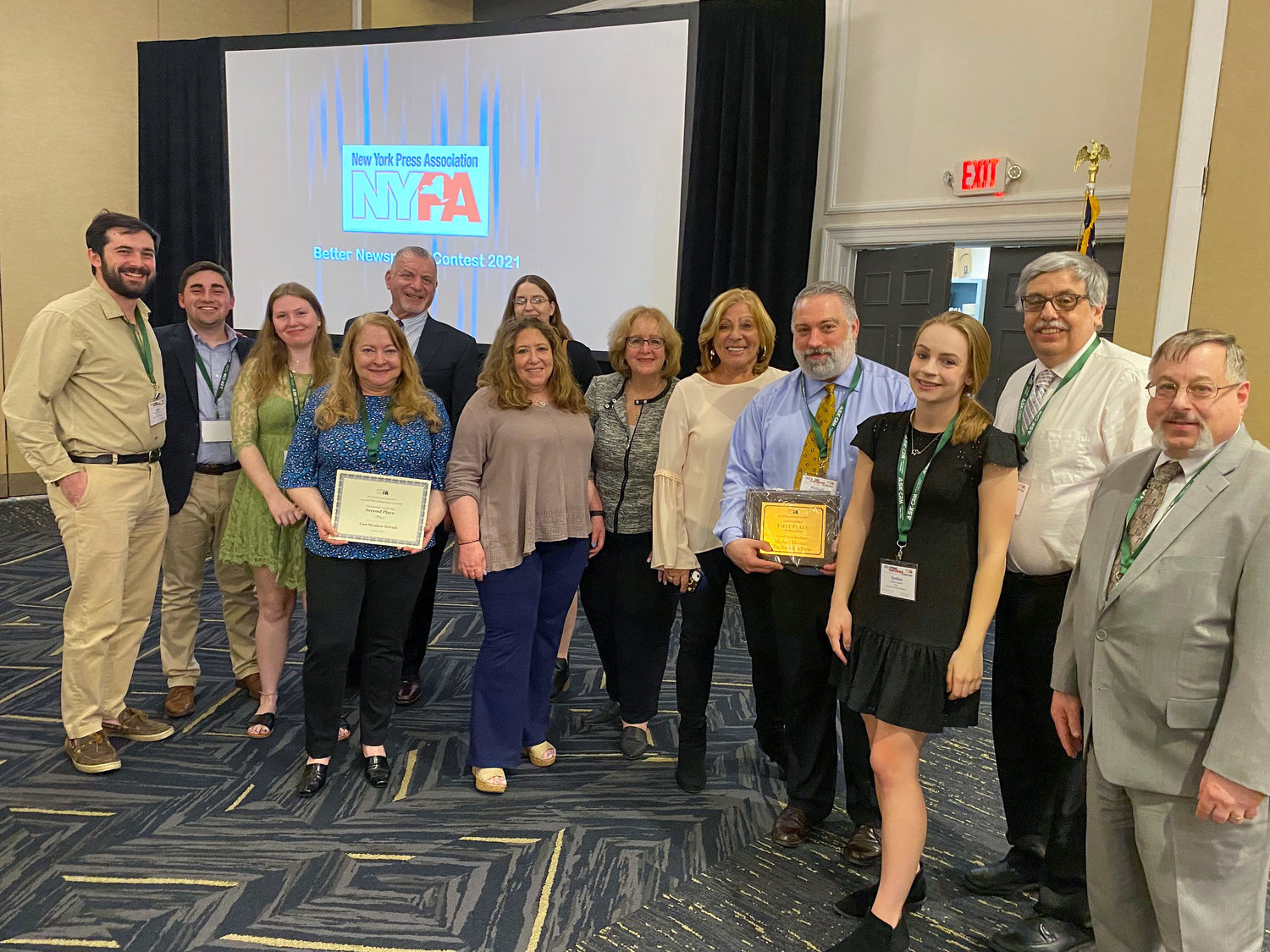 It was a big showing for The Riverdale Press at the New York Press Association spring conference last weekend in Saratoga Springs, with the paper winning 11 state awards, including a repeat performance being named New York’s best newspaper.

That honor is bestowed as the Past Presidents’ Award for General Excellence, which judges newspapers based on a number of categories including news coverage and quality of writing, use of pictures and artwork, community engagement, opinion pages, and graphic design, among other factors. This is the second consecutive year The Press has won this award, having been a runner-up in previous years.

Named after the former Press publisher, Hinman last won this award in 2018, although the paper had been a state runner-up in recent years. The paper finished ahead of runners-up The East Hampton Press and The Suffolk Times in Mattituck.

Hinman is now executive editor of Herald Community Newspapers, the group of two-dozen papers based on Long Island that includes The Riverdale Press.

“I am immensely proud of our team for once again being recognized for the tremendous work that they do serving our communities week in and week out,” said Stuart Richner, publisher of The Press. “Never has local journalism been more important than during the past two years. Throughout the entire pandemic, our team of essential workers has been in the communities telling the stories of our neighbors, businesses and institutions.

“Our company is proudly family-owned, which allows us to impartially report the facts. From critical health information and school updates, to celebrations of life’s milestones and more — we’ve got you covered.”

The Press earned top honors in two other categories as well — for best editorial page, and for best special section on newsprint. Judges from the Nebraska Press Association described the paper’s opinion pages as “clean” and “easy to read,” praising Hinman for his work “including different viewpoints — or, viewpoints that differ from” editorials written by The Press.

The paper also earned top honors for best special section thanks to its elections coverage ahead of the June primary last year that included stories by former reporter Ethan Stark-Miller, intern Jilleen Barrett and Hinman.

“Congratulations for tackling the political editorial and advertising challenges to create a well-written, important publication for your readers,” the judges said. “The political advertising dollars are hard to secure, (but) you have done that with this section. Hopefully you will continue to publish in the future.”

This is the second consecutive year The Press has won this category, picking it up in 2021 for its throwback issue to honor the newspaper’s 70th anniversary.

“Winning awards like this is such a team effort, and comes not from a desire to earn accolades, but simply by focusing on being the best newspaper for the community we love,” said Hinman, who led the paper to winning 40 state awards during his tenure.

“I couldn’t be more proud of everyone on our team, and look forward to seeing that success continue under our new editor, Gary Larkin.”

• Coverage of local government for Stark-Miller, Hinman, and reporter Joseph De La Cruz, described as coverage that “gets the reader to finish the story inside the paper.”

• Coverage of elections and politics for Stark-Miller and Hinman.

• Feature story for Hinman’s profile on former Daily News photographer David Handschuh, who was severely injured when the South Tower of the World Trade Center collapsed on him on Sept. 11, 2001.

“Those moments on 9/11 were gripping,” according to the judges. “And the use of his quotes added wonderfully to the article.”

“A true breaking news photo,” the judges said. “Between the flooded roadway and the people looking at the scene from the overpass, this shot really shows the impact of the flooding.”

The Press also received honorable mentions for Stark-Miller and De La Cruz’s coverage of business, financial and economic news, while Hinman was recognized for editorials and columns.

Overall, the publications from Herald Community Newspapers won 28 state awards, allowing it to finish in the top three newspaper groups and chains in New York.

In all, more than 130 newspapers participated in this year’s competition, submitting 2,481 entries in 67 categories.