‘WHAT A PRIMARY MESS’ 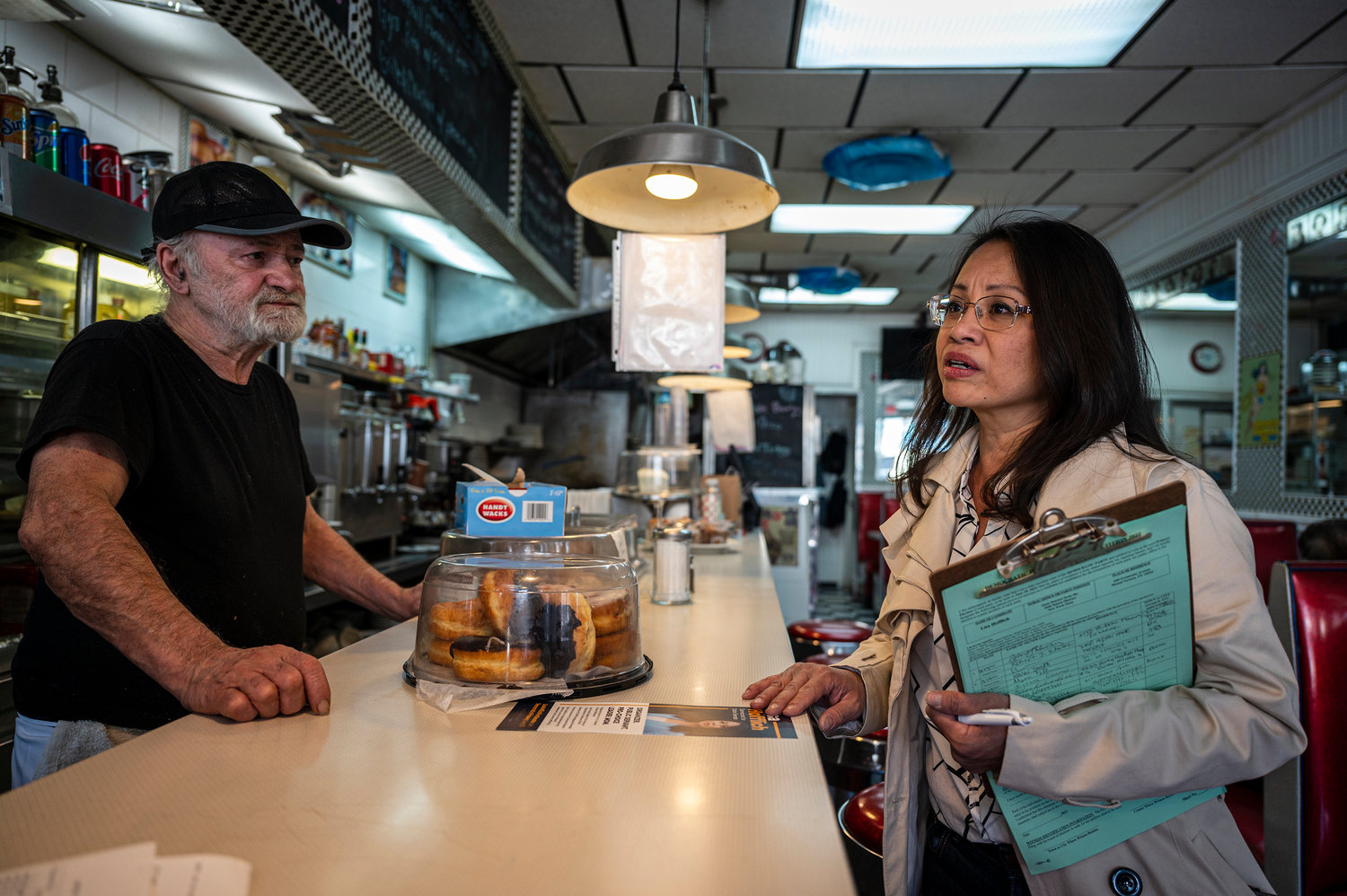 Lisa Hofflich says she’ll continue campaign for Alessandra Biaggi’s state senate seat despite the latest court ruling throwing out the very district maps her campaign has depended on. Biaggi, who is leaving the seat to run for congress, faces her own uncertainty in the district currently represented by gubernatorial candidate Tom Suozzi.
Hiram Alejandro Durán 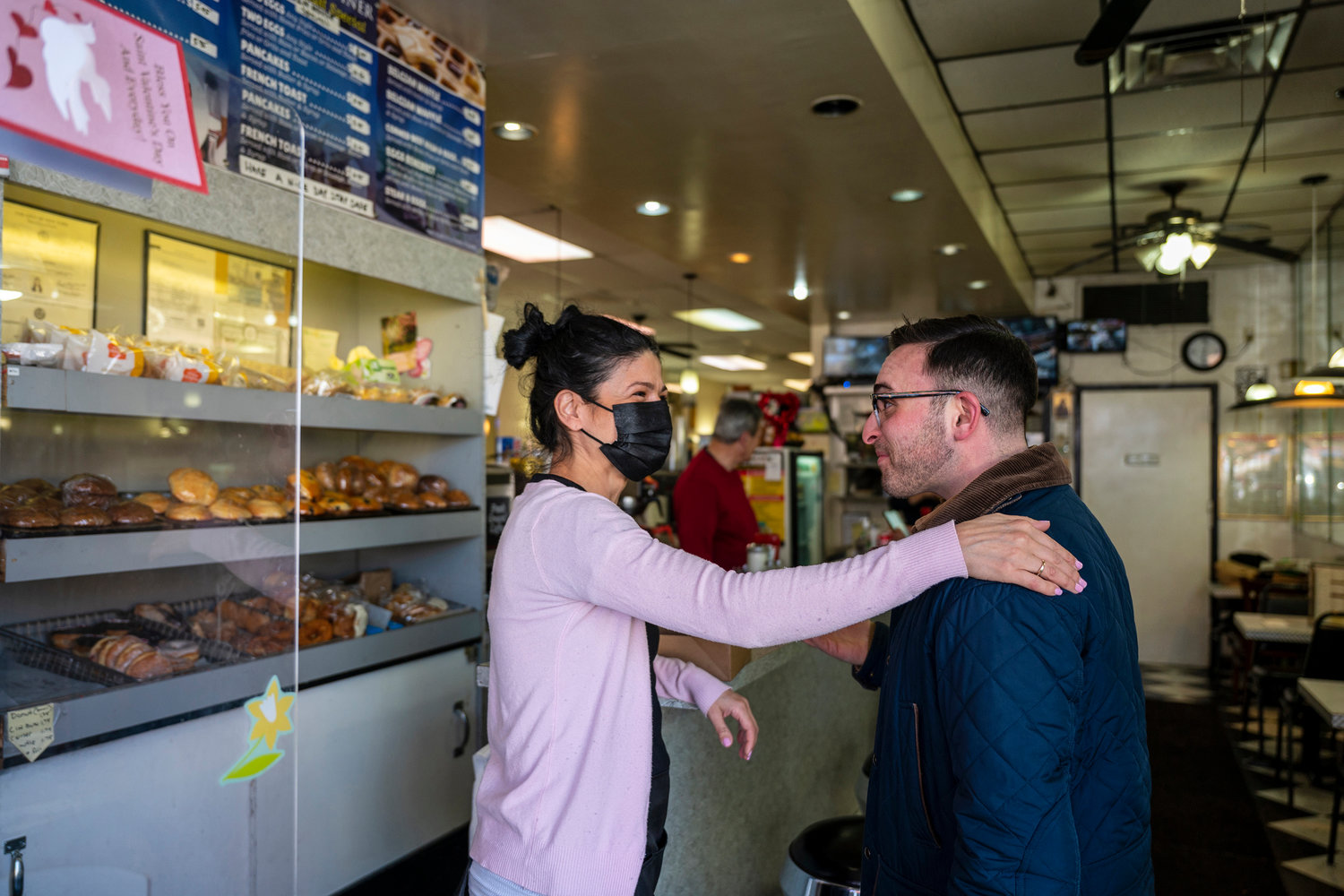 Christian Amato says he will continue to campaign for the state senate seat currently held by his former boss, Alessandra Biaggi, despite the latest court ruling throwing out the new district maps for the very role he seeks.
Hiram Alejandro Durán
Previous Next

At the end of the day, it’s about people. Not lines on a map.”
MIGUELINA CAMILO state senate candidate
By SACHI McCLENDON

Democrats looking to succeed Alessandra Biaggi for her state senate seat have no plans to give up campaigning, although there is a chance the very district they’re running for may change before the newly moved Aug. 23 primary.

That’s because New York’s Court of Appeals rejected the new congressional and state senate maps designed by state legislators and approved by Gov. Kathy Hochul last week in a split vote that has since thrown the political calendar into chaos while delivering a sharp blow to Democrats hoping to gain a partisan advantage in Washington.

There is no appeal available, allowing Steuben County supreme court justice Patrick McAllister —who presided over the original lawsuit— to appoint a redistricting expert, Jonathan Cervas, to draw up new congressional and state senate district maps. He has until May 20 to get it done.

In the meantime, political parties on both sides of the aisle have been given an opportunity to submit their own maps, although the final decision on who represents what will be up to Cervas and the court.

To help ensure candidates have enough time to campaign on what is likely going to be revised districts, McAllister ordered congressional and state senate primaries pushed back to Aug. 23.

The judge has left it up to the legislature to decide whether to reschedule all of the other primaries to August, or to have voters head to the polls twice, beginning June 28, to cast ballots for for Assembly primaries.

Yet, even those lines could be in jeopardy after the New York Young Republican Club filed an emergency motion to see the Assembly maps gone as well.

Even though the revised state senate districts no longer exist — at least for all intents and purposes — most candidates running to replace Biaggi say they’re committed to continue their races.

“Let me assure you right now: This ruling changes nothing for me,” Lisa Hofflich said, in a statement. “We’ll still be out in the field spreading the word about this campaign.”

“At the end of the day, it’s about people, not lines on a map,” said Miguelina Camilo, the Bronx Democratic Party’s choice for the seat. “Even with all this uncertainty, I am still getting to meet my neighbors and hear what their priorities are. People need a leader that is present in their community and listens to their needs, which is why I got into this race in the first place.”

Christian Amato says he views this latest ruling as a welcome chance to further educate constituents on his own candidacy to replace his former boss.

“It’s a really good opportunity to have conversations and inform people of the process and sort of educate around these things,” he said. “I view it as an opportunity for great dialogue and voter education.

“I’ve been across this entire borough, so even if the map shifts, I’m certain that I’ll be familiar with the areas that might be in a new map.”

James Gisondi is the only Democratic candidate holding out for the new maps, but then again, he might not have a choice after he was thrown off the ballot this past week. Even if he makes it back on, he’s still not sure how he might move forward.

“What happens if they connect it to Queens, and it’s like 90 percent Queens and 10 percent in the Bronx, just a little piece of dirt?” he asked. “Then I have to think about it because it’s a whole different district.”

Last week’s ruling is the latest installment in an ongoing legal battle over the new district maps. McAllister first tossed out the redistricting last month, saying they were drawn with political bias.

In his ruling, he wrote that, beyond a reasonable doubt, state lawmakers restructured districts to favor the Democratic Party, even though partisan gerrymandering is prohibited by the state’s constitution.

This most recent redistricting process was expected to be less partisan than those in the past, as a change in the state’s constitution paved the way for an independent commission to draw lines, supposedly free from political bias. However, the newly minted Independent Redistricting Commission was unable to reach a consensus, punting the problem back to the legislature, which ultimately settled on the maps now in contention.

Once the legislature’s new maps went live, a number of politicians launched campaigns for new offices. Biaggi suddenly found herself in the same congressional district as Tom Suozzi, despite the fact he mostly represents Long Island, and she lives in Westchester County — with at least two New York City boroughs separating the two sides.

That had been good news for Biaggi, because Suozzi was already knee-deep in a campaign to be New York’s next governor, challenging Hochul in the Democratic primary.

Democrats were reportedly caught off-guard with McAllister’s initial ruling last month, and expected his decision would be overturned by the appellate courts.

“The clear instructions of the board of elections are to continue under the current map and deadlines,” Biaggi said at the time, “so that’s what we are doing.”

And even after this latest ruling, Biaggi herself won’t give up on her hopes of following her late grandfather into the U.S. House of Representatives.

“I entered this race because I am deeply committed to fighting for the people of NY-3 and protecting abortion and voting rights, combating the climate crisis, and expanding access to affordable health care and housing,” Biaggi told supporters in an email.

“I am the most experienced, qualified and committed candidate.”