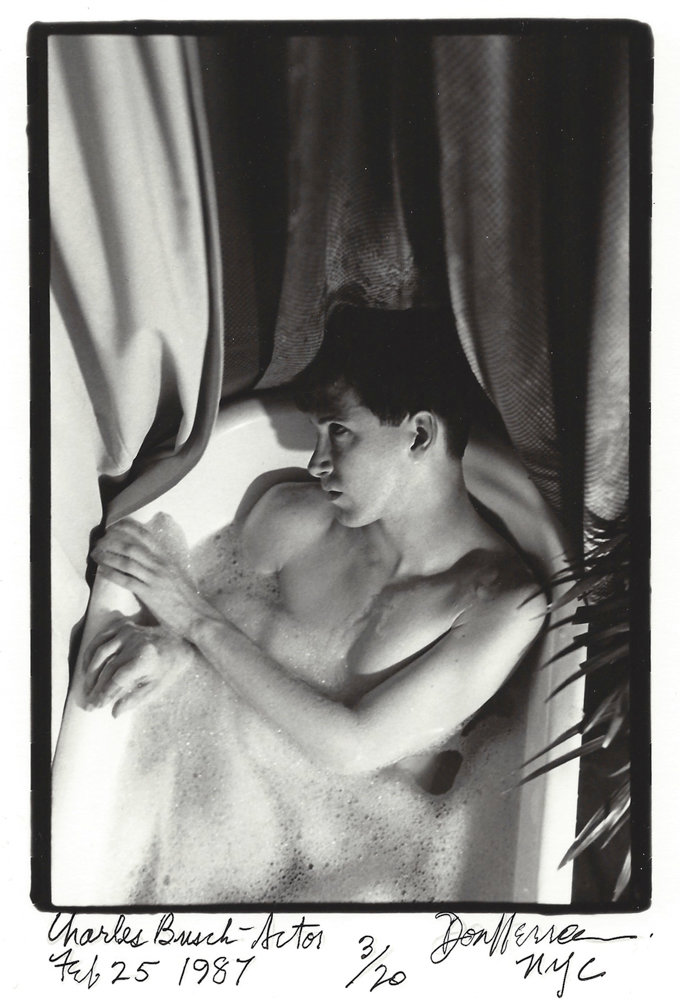 Don Herron photographed Charles Busch in his tub on Feb. 23, 1987. An actor, playwright and female impersonator, Busch had newfound success at the time with the off-Broadway production of ‘The Vampire Lesbians of Sodom.’ An exhibition of Herron’s series ‘Tub Shots’ is on display at Daniel Cooney Fine Art through Nov. 3.
Courtesy of the Estate of Don Herron 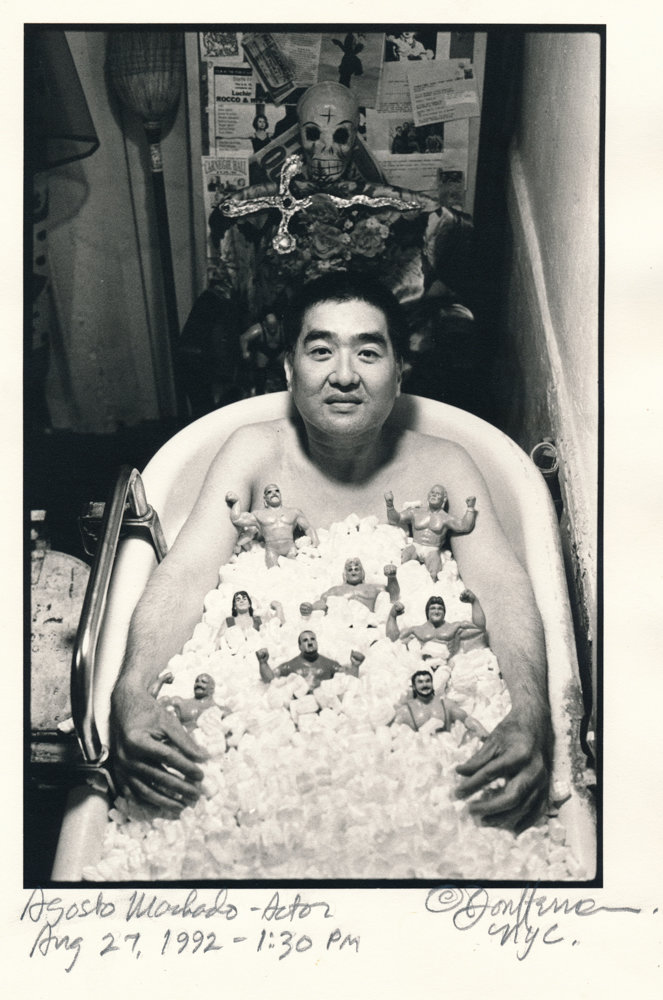 Agosto Machado chose to cover himself in packing peanuts and muscle men figures in his tub when Don Herron took his picture on Aug. 27, 1992. An exhibition of Herron’s series ‘Tub Shots’ is on display at Daniel Cooney Fine Art through Nov. 3.
Courtesy of the Estate of Don Herron 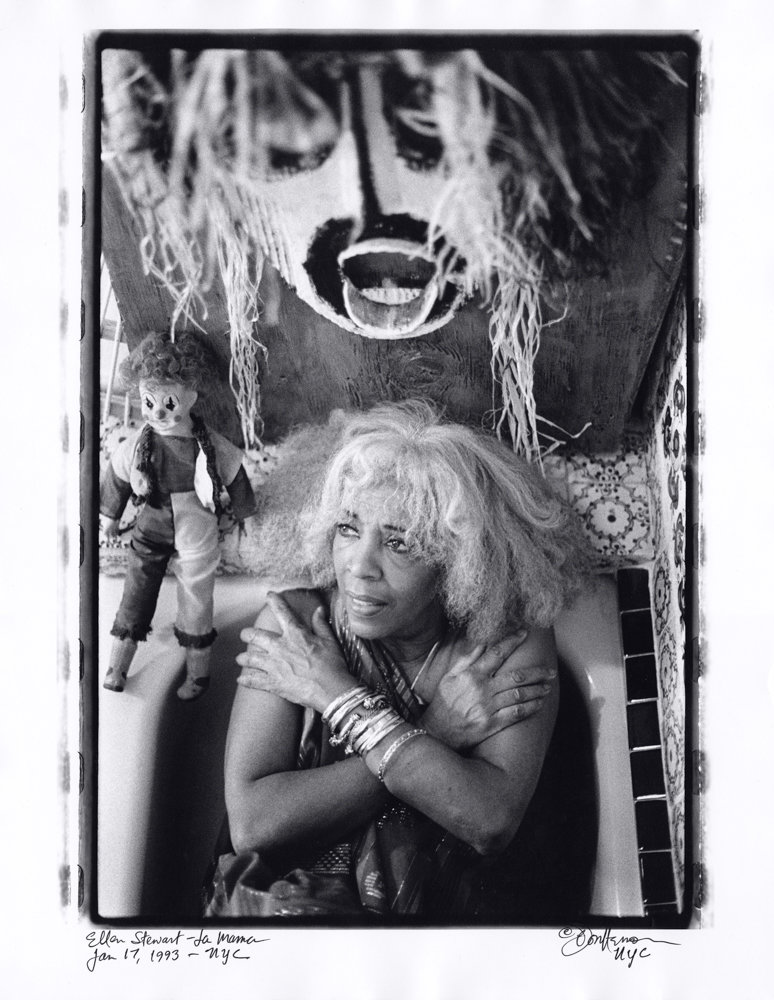 Ellen Stewart, founder of the La Mama Experimental Theatre Club, chose to remain clothed when Don Herron photographed her in her tub on Jan. 17, 1993. An exhibition of Herron’s series ‘Tub Shots’ is on display at Daniel Cooney Fine Art through Nov. 3.
Courtesy of the Estate of Don Herron 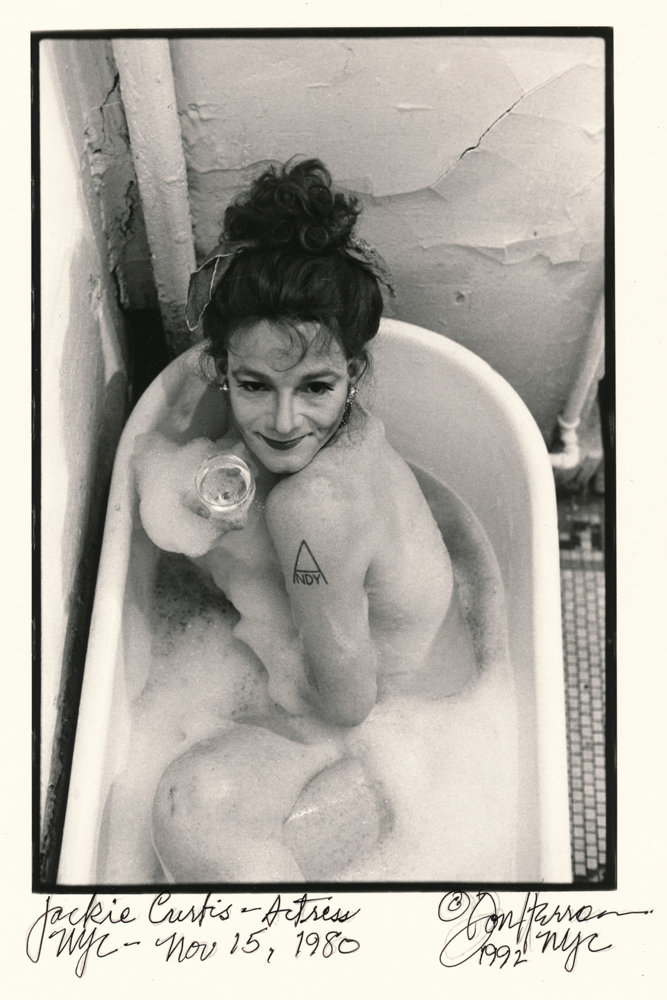 Don Herron photographed Jackie Curtis, an actress and close friend of artist Andy Warhol, on Nov. 15, 1980. An exhibition of Herron’s series ‘Tub Shots’ is on display at Daniel Cooney Fine Art through Nov. 3.
Courtesy of the Estate of Don Herron 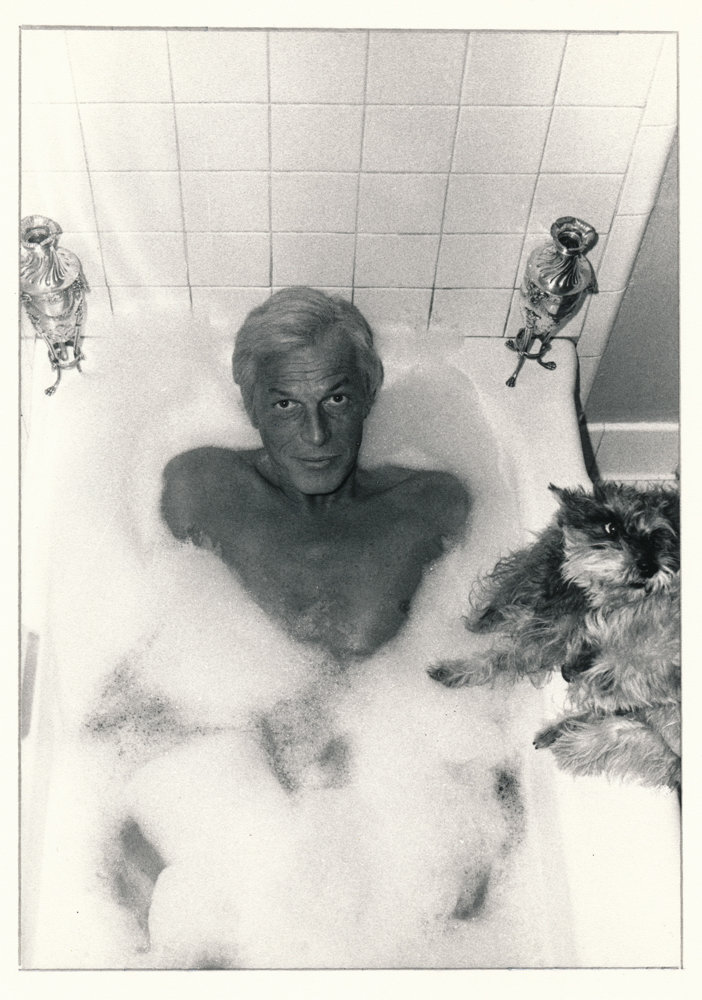 A dog makes a cameo appearance in Don Herron’s picture of a soapy Richard Ridge. An exhibition of Herron’s series ‘Tub Shots’ is on display at Daniel Cooney Fine Art through Nov. 3.
Courtesy of the Estate of Don Herron
Previous Next
If you go ...

Charles Busch wishes he would have been more explicit.

The photograph of himself on the wall brought him back to Feb. 25, 1987, when he was covered in suds in his bathtub while photographer Don Herron took his picture. Looking at pictures of his contemporaries in the gallery, Busch saw that he could have gone further, could have shown more of himself.

“If you’re going to do something,” Busch said, “just go all the way.”

An actor, playwright and female impersonator, Busch is one of many luminaries of New York City’s underground creative scene that Herron photographed in their bathtubs. A new exhibition of Herron’s series, “Tub Shots,” is on view at Daniel Cooney Fine Art through Nov. 3.

Between 1978 and 1993, Herron sought out people to photograph “in containers,” and for him, the bathtub made the most sense. While Herron photographed people in Texas and California, the bulk of the series took place in New York City where so many artists lived at the time. He started photographing his friends, and gradually built out from there.

“He always got a referral,” said Daniel Cooney, the curator of the exhibition.

To photograph someone in the bathtub is a hard sell for many people. Yet, Herron found willing collaborators, and he was perhaps one of a select few photographers who could have achieved what he did in the time that he did. He leaned into his Texan origins to help people open up, invite him in, and be vulnerable with him.

“Don was a southern gentleman,” said William Noonan, an artist and longtime creative collaborator, and friend of Herron’s. “I don’t think someone with a different personality could have achieved it.”

In 1987, when Busch found himself in his tub with Herron behind the camera, Busch had newfound success as a performer with “The Vampire Lesbians of Sodom,” a play he wrote that had its off-Broadway debut in 1985.

Performance is an essential part of who Busch is, and he let his interest in glamour guide how he designed his portrait. It’s a tableaux in which he is framed by both his tub and curtain, with the blades of a houseplant peeking in on the right side of the frame.

Busch remembers feeling comfortable around Herron, as so many of the people he photographed did. It takes a certain level of comfort to invite a photographer in to such a vulnerable and private space, and it was a mélange of southern charm, persistence and confidence that helped Herron secure that kind of access.

“Don was never afraid to ask for anything,” Noonan said.

Born in Texas in 1941, Herron arrived in New York City in 1978 from San Francisco where he’d lived for six years. He found his way into the city’s burgeoning underground scene where he crossed paths with some of the most renowned cultural figures of the 20th century, like photographers Robert Mapplethorpe and Peter Hujar.

As Busch recalls, the process was deeply collaborative, though Herron mostly gave control to his subjects.

“He left it up to me to set up the bathroom,” Busch said. “He let everyone do that.”

From there, anything was possible. Agosto Machado, a performance artist and activist, covered himself in packing peanuts and muscle man figures. Ellen Stewart, the artistic director of the La Mama Experimental Theatre Club, looks as though she’s having a religious experience with her arms crossed over chest as she is framed by a doll, decorative tiles and a piece of art hanging above her head.

Actress Jackie Curtis is covered in suds as she holds a glass and boasts a tattoo on her arm featuring Andy Warhol’s name.

Others showed all of themselves, and some discretion is advised when viewing these pictures.

“Tub Shots” comprises most, if not all, of Herron’s photographic oeuvre. He had a number of creative incarnations after he finished working on the series. Herron would go on to work as an illustrator and a writer in Newburgh, where he lived from the mid-1980s until his death in 2012.

The 65 black-and-white photographs in the exhibition are a cultural artifact of a bohemian New York City. They crackle with the raw energy and artistic verve of the time, and are a testament to a thriving community of artists, photographers, performers, poets and writers that no longer exists.

The effect of AIDS

An inescapable fact of the series is that some of the people portrayed eventually lost their lives in the AIDS crisis, like Mapplethorpe and Haring.

Herron’s photographs have become an emotional touchstone for those who are alive today. They see in those pictures the lives and artistic legacies that were tragically cut short.

“That becomes the great question mark that we live with,” Busch said. “What work have we been denied had they lived another 30 years?”