From textiles to text styles 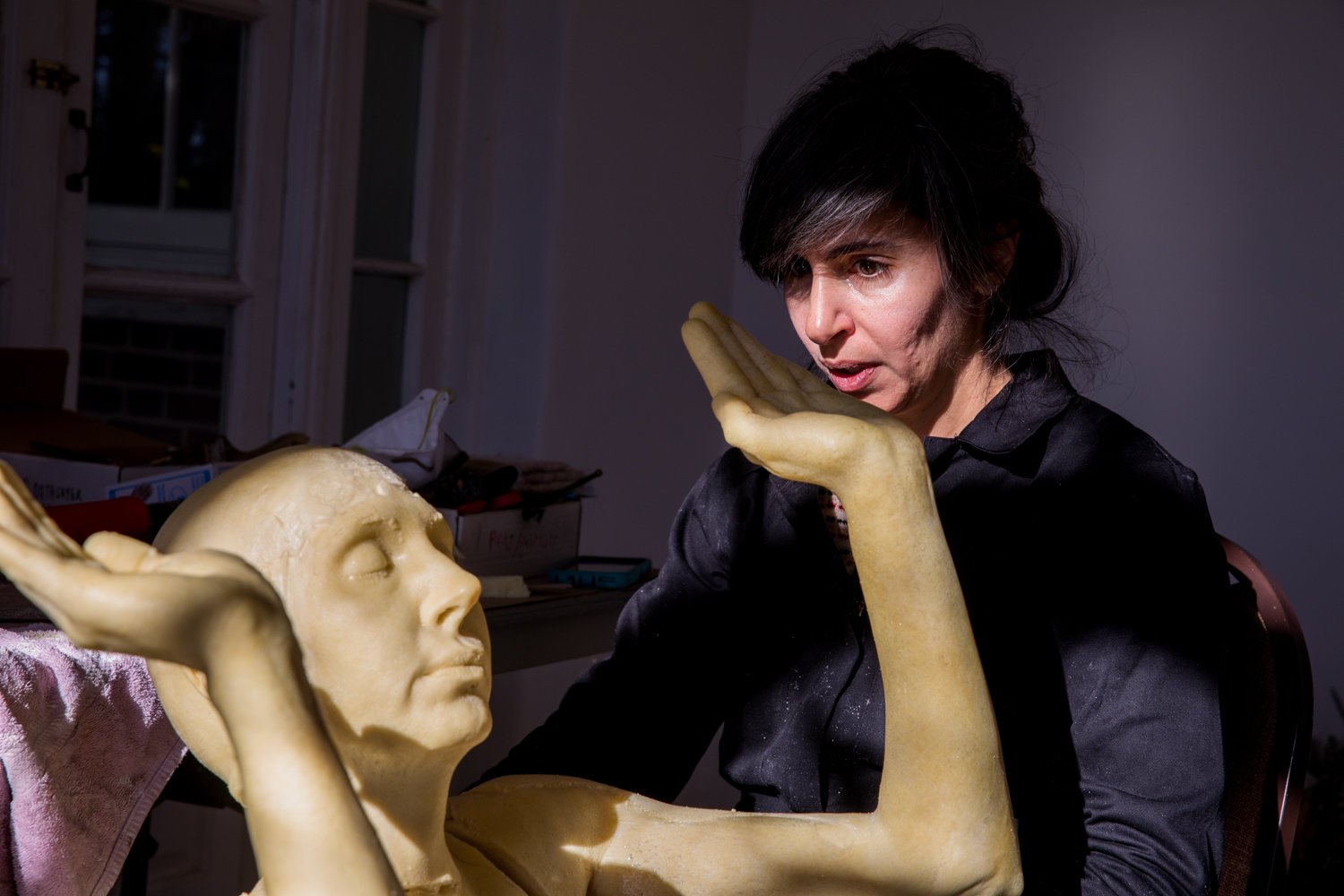 Kymia Nawabi works with a mannequin as part of her costume design project for her Winter Workspace residency at Wave Hill.
JULIUS CONSTANTINE MOTAL 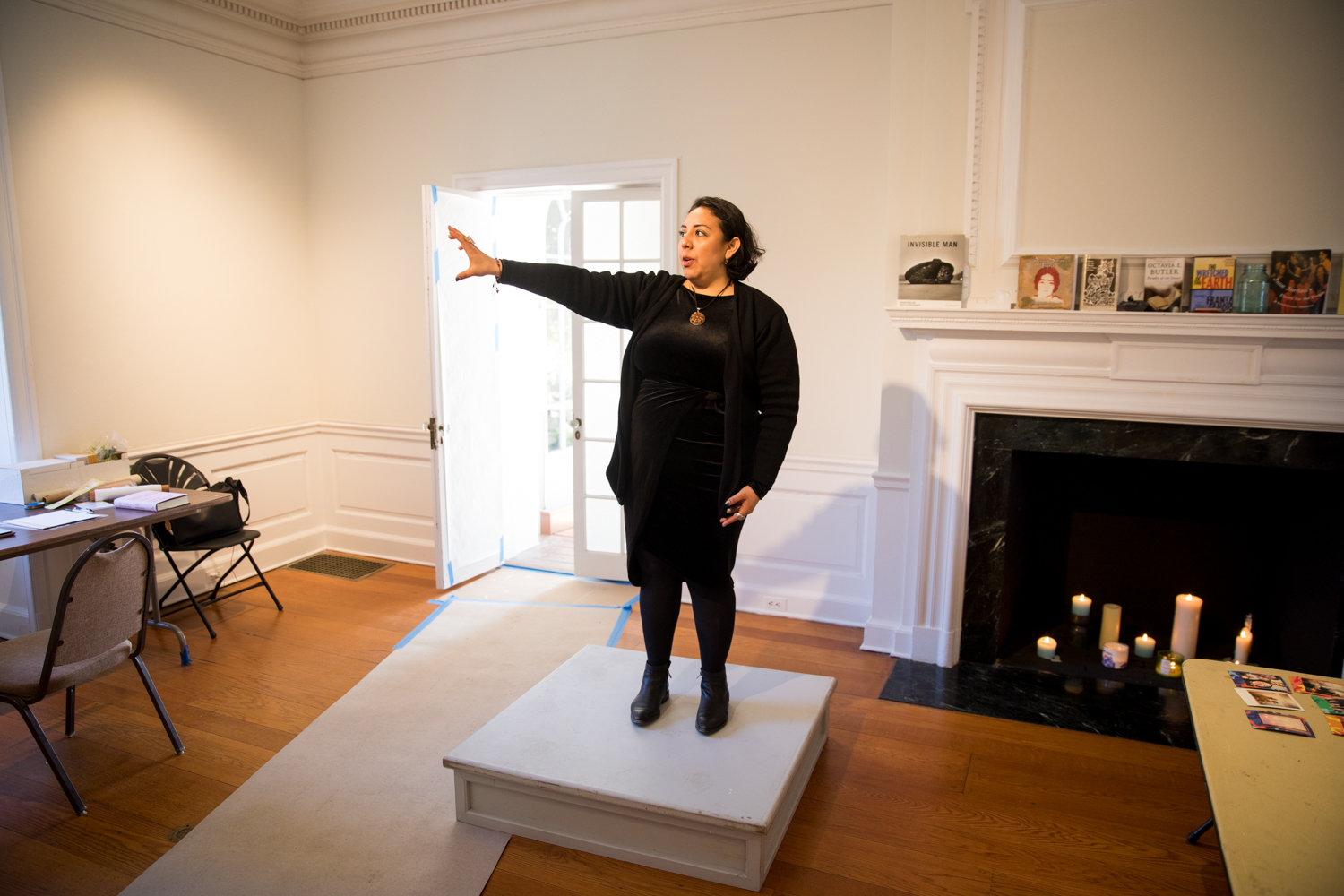 Stephanie Alvarado talks about her melding of photo archiving and choreo-poetry for her Winter Workspace residency at Wave Hill.
JULIUS CONSTANTINE MOTAL 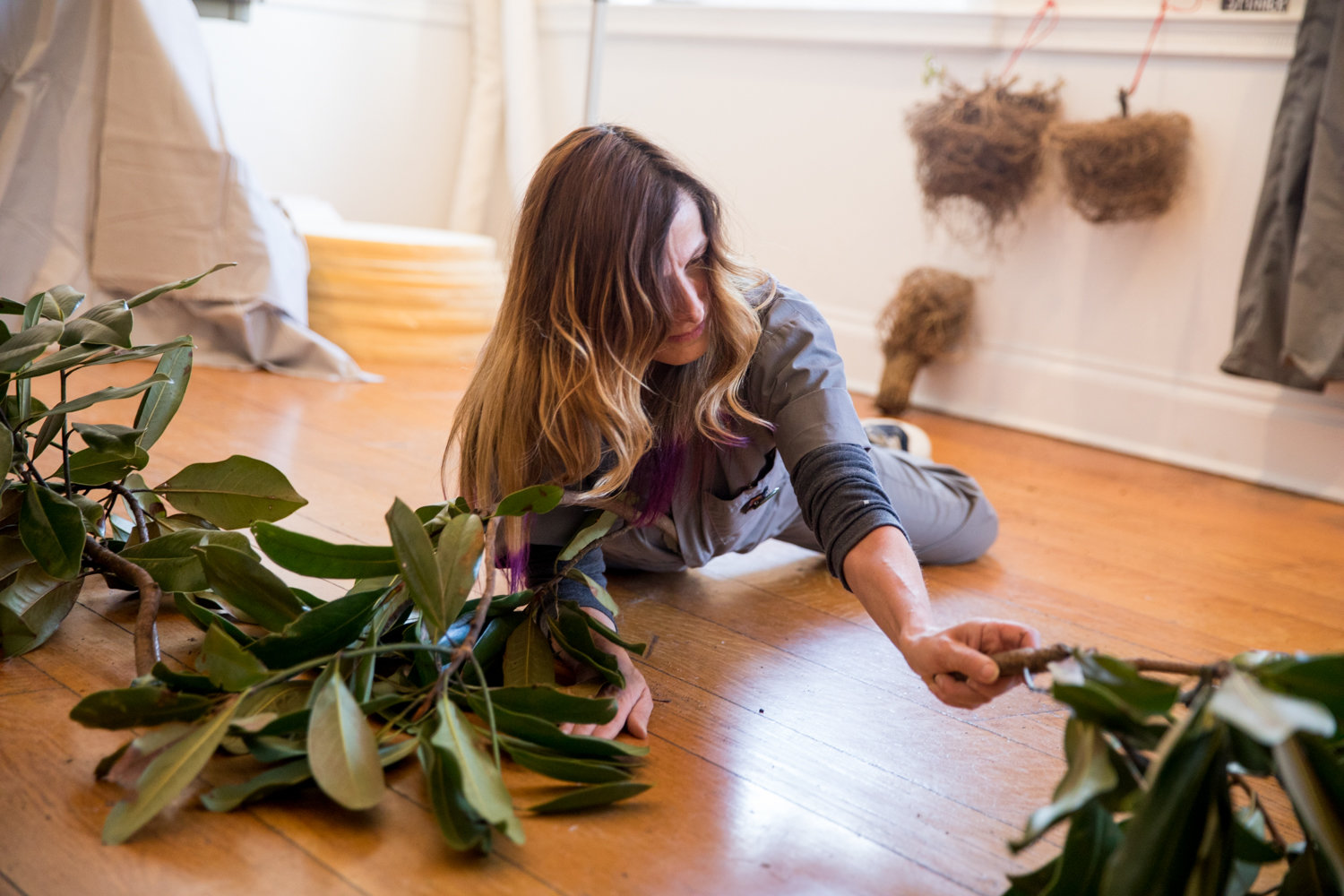 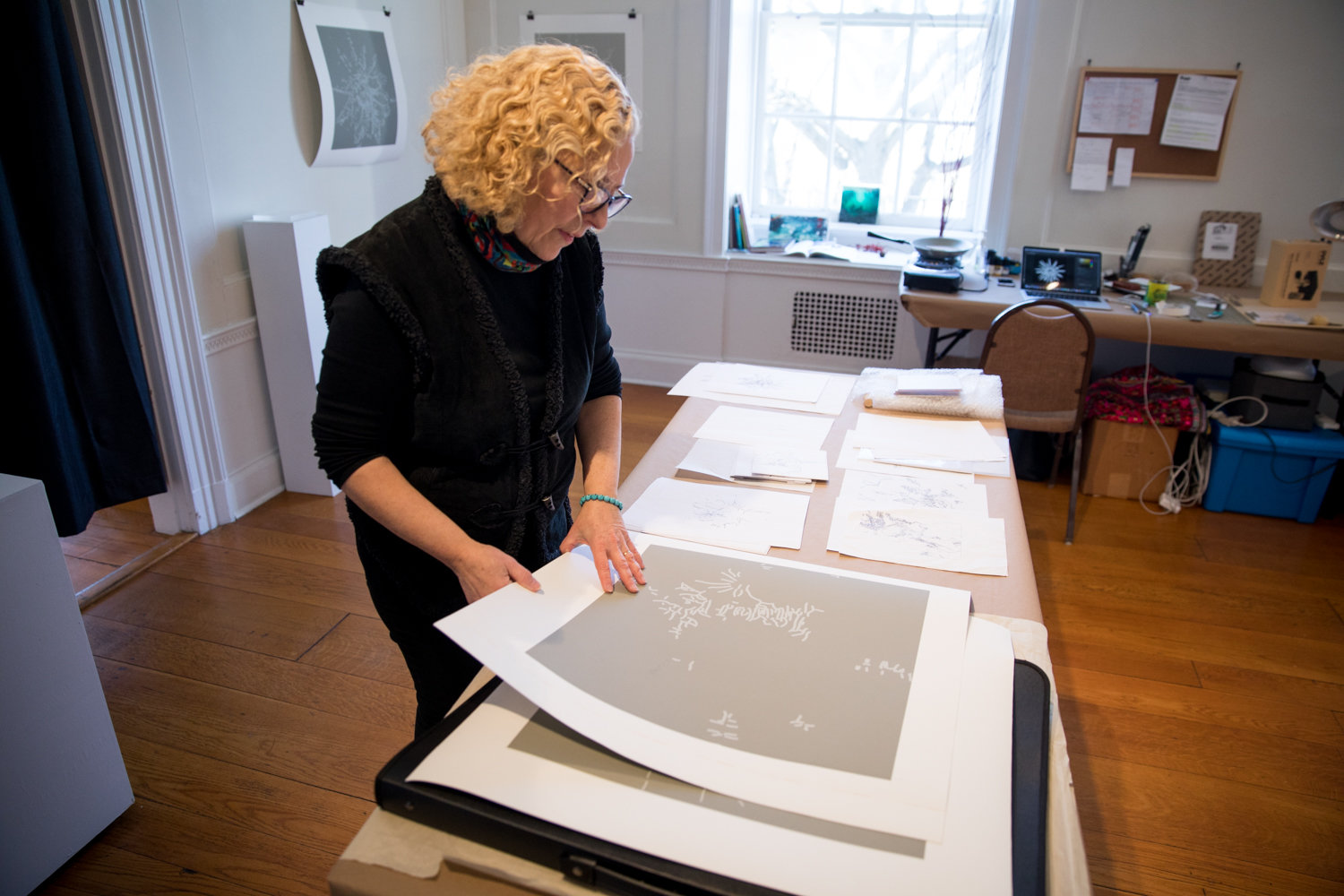 Linda Lauro-Lazin talks about her work with the night-blooming cereus flower, which blooms only once a year, as part of her project for her Winter Workspace residency at Wave Hill.
JULIUS CONSTANTINE MOTAL 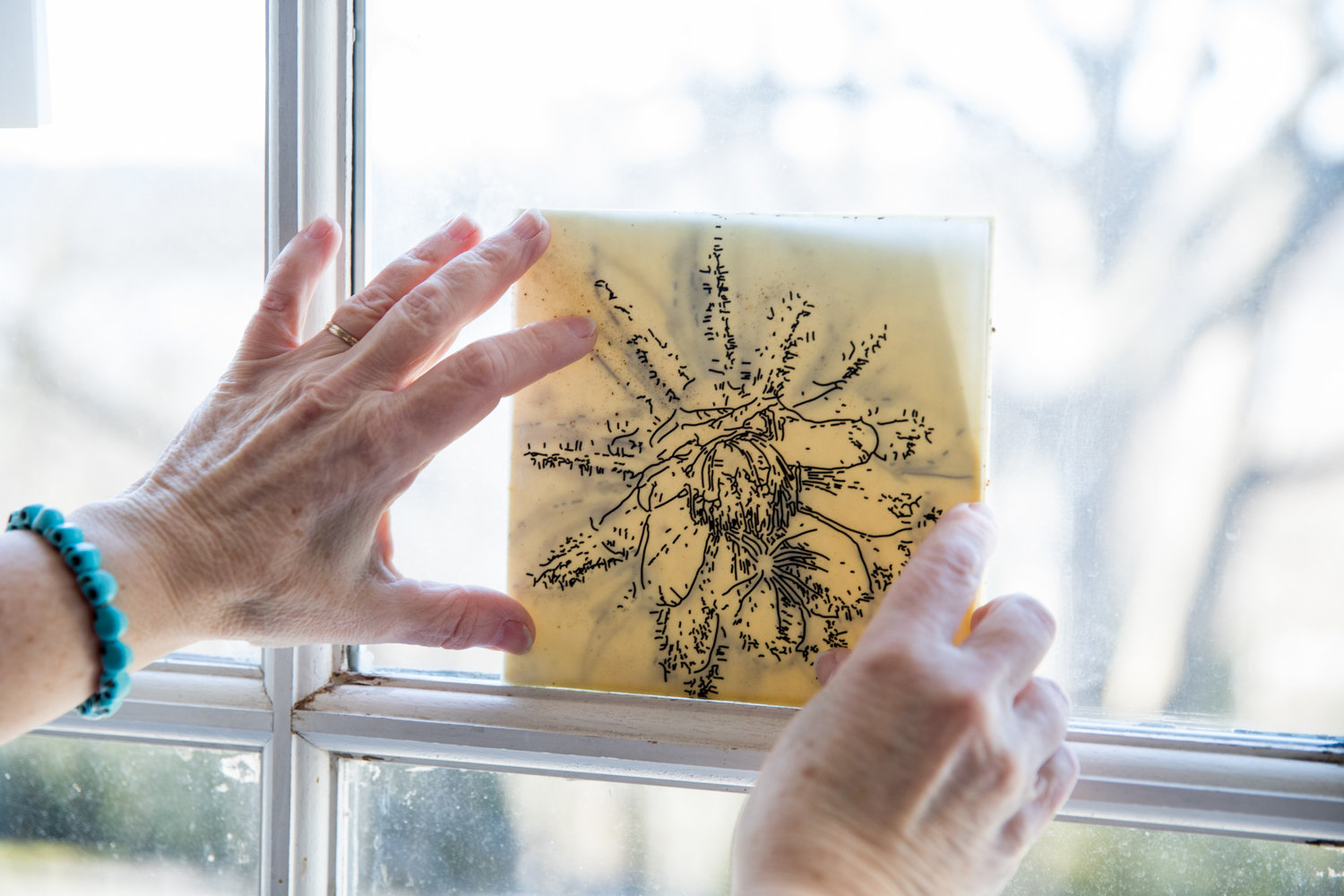 Linda Lauro-Lazin shows how superimposed sketches create the night-blooming cereus flower, which is the basis of her Winter Workspace residency at Wave Hill.
JULIUS CONSTANTINE MOTAL 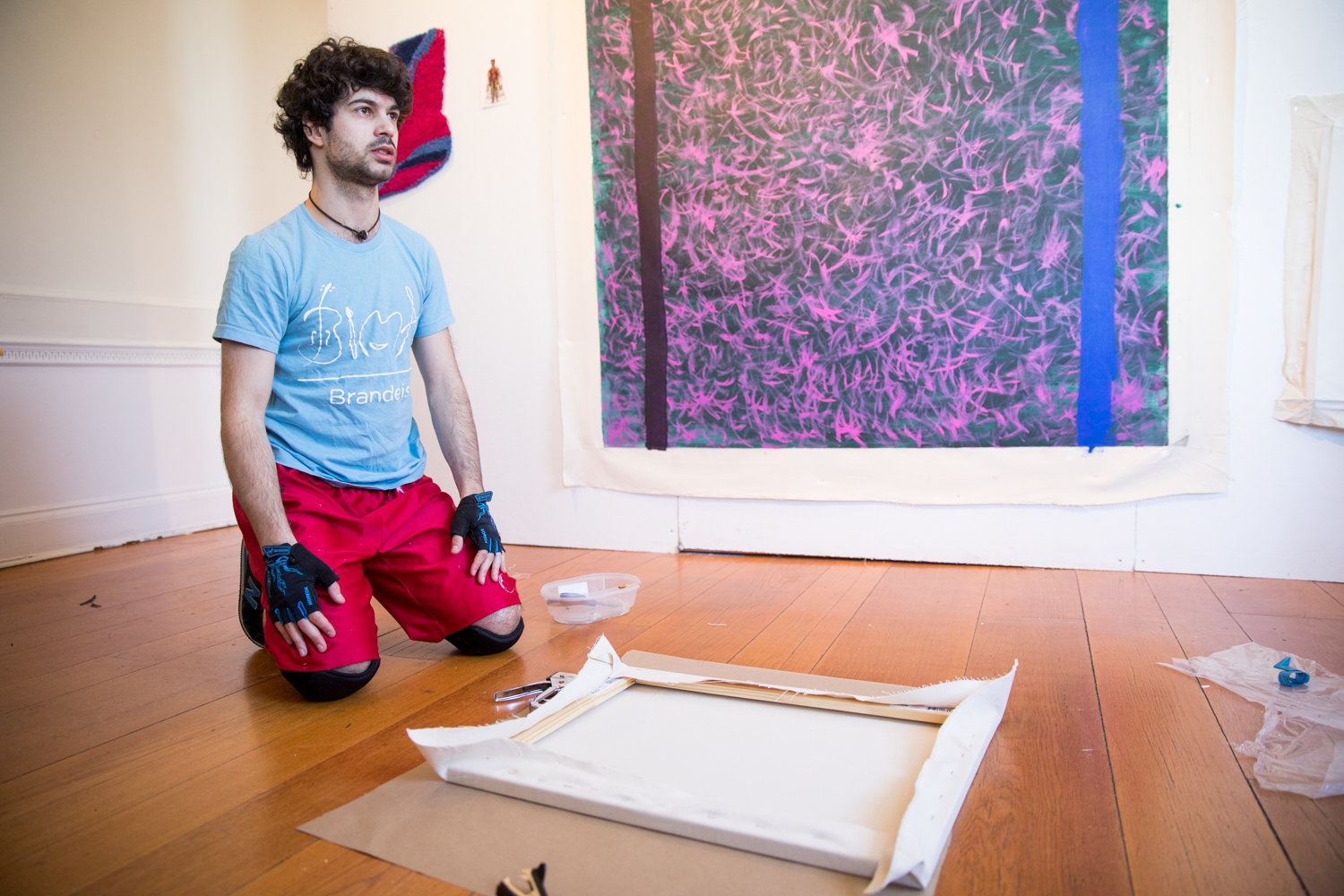 Ezra Benus talks about how medication serves as a jumping off point for the art he is creating as part of his Winter Workspace residency at Wave Hill.
JULIUS CONSTANTINE MOTAL 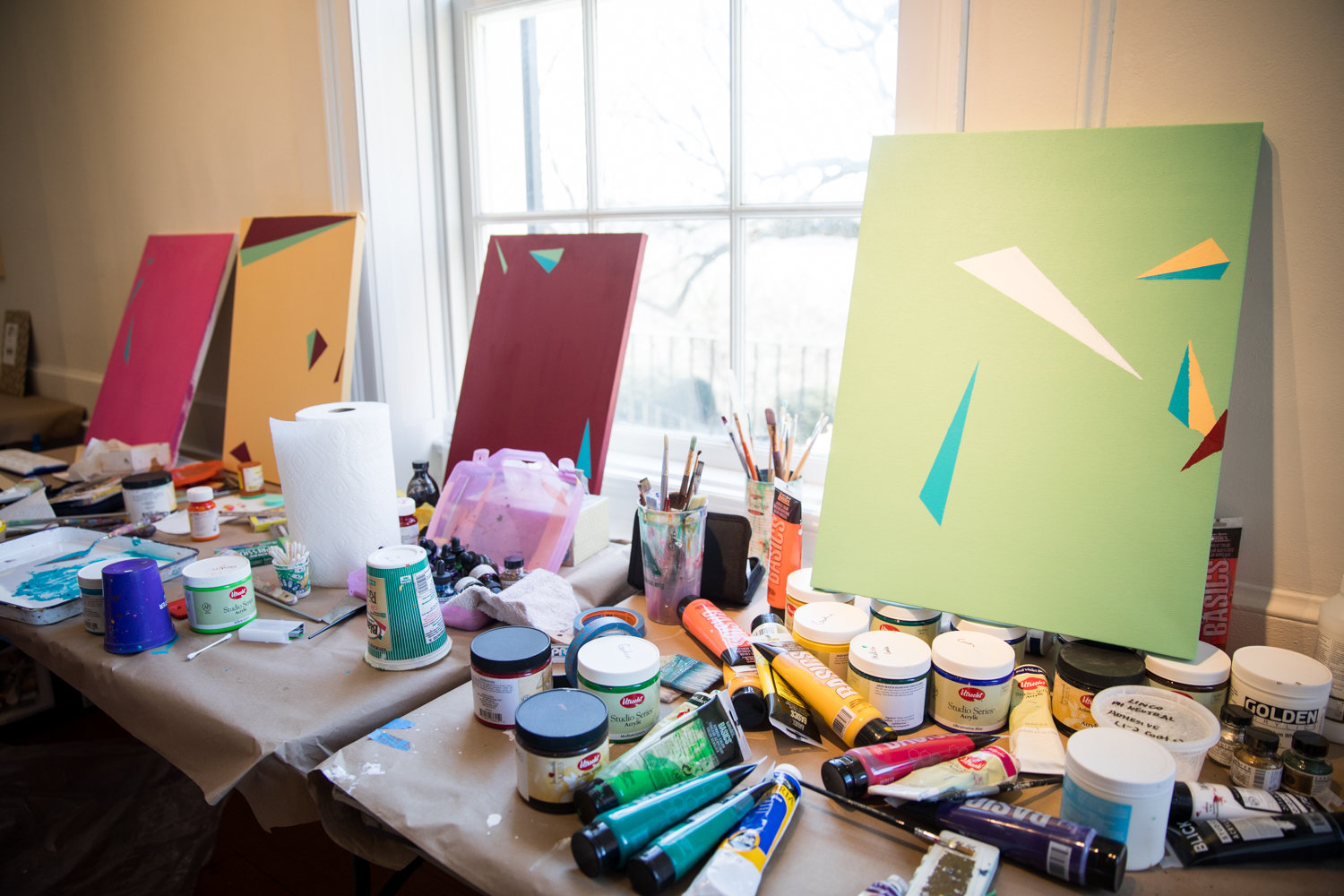 Ezra Benus is working on a series of paintings that uses medication as a jumping off point for his Winter Workspace residency at Wave Hill.
JULIUS CONSTANTINE MOTAL
Previous Next
By RAPHAEL LASSAUZE

With light from the sunset flowing through the studio window, Kymia Nawabi kneels before a wax mold of her own body, dragging the glinting teeth of a saw over the leg.

Nawabi’s project focuses on the human body, decorating it with glittering, painted elements of nature, ranging from pinecones to simple sticks. She then makes armor out of it.

“Part of it is rooted in alchemy,” Nawabi said. “I’ve done a lot of research on the occult, and I wanted to make a magical suit of armor based on my own body.”

That’s just one kind of artwork in creation at Wave Hill’s winter residency workshop, where artists cloister in the Independence Avenue garden’s Glyndor Gallery and create over the course of six weeks. Jennifer McGregor, senior director of arts programs at Wave Hill, makes it clear the artists they include in the residency are some of the best available.

“We usually have around 100 applications through a nomination process,” McGregor said. “And we look for artists that will explore our site and be inspired by it.”

Nawabi found that inspiration in her armor, which also is a feature of several plants and insects, all in an attempt to bring the two-dimensional to the three-dimensional.

“It’s from character designs I’ve had for years,” Nawabi said. “That factors into my work, bridging the two.”

While Nawabi’s armor may glisten, the work of Linda Lauro-Lazin, an art professor at Pratt Institute, shines in a different way. Her work revolves around the night-blooming cereus, a nocturnal flower that blooms just one evening each year.

“I find my connection with this flower to be ephemeral,” Lauro-Lazin said. “Something of life and death.”

“I’d like to introduce a proximity censor,” Lauro-Lazin said. “The longer one stands still, the more of an image they’ll see. I’m also working with a perfumer to form the scent of this flower.”

Gesturing in the direction of the Wave Hill greenhouse, where a night-blooming cereus waits, Lauro-Lazin reflected on the opportunities presented by the park.

“This is such a wonderful place to make work,” Lauro-Lazin said. “I’m always talking with the gardeners. My neighbors here get along very well, I’d say.”

One of those “neighbors,” artist Tali Hinkis, isn’t from the area, but travels from Long Island to create her pieces.

“My work encompasses many things,” Hinkis said. “For example, this project uses a homemade camera.”

With that camera, Hinkis takes photos of the garden, which then coagulate into a form of collage. Hinkis then transfers the image to fabric.

“I’m looking at the intersection between art and technology,” Hinkis said. “I consider it a translation between the visual and the physical.”

Hinkis, who’s also known by the moniker LoVid, has earned her spots in international film festivals and galleries the world over.

But not every artist in the workshops is as established as Hinkis or Lauro-Lazin. That doesn’t mean they’re any less sophisticated, however.

Stephanie Alvarado gestures to a fireplace in her studio. In place of an actual fire are several candles burning carefully and slowly as Alvarado worked.

“This is an altar,” Alvarado said. “It reminds me to stay grounded. It reminds me that I’m part of a legacy, and that I must have humility.”

As a community organizer in the Bronx for 15 years, Alvarado considers artwork and performance as viable methods of healing a pained community.

“This residency helps me bring photo and poetry together,” Alvarado said. “It’s archival, but it’s in the now.”

As part of her residency, Alvarado has invited visitors with personal photographs to contribute.

“I consider this project to be an exercise in radical trust,” Alvarado said. “Their interaction is so important to me.”

While Alvarado’s work at Wave Hill is deeply ingrained in the fabric of nearby community, the work of others, like Ezra Benus, is more concerned with the foundations of society at large, like disability. Specifically, he utilizes pills in order to create a pallet by which his artwork reflects the aesthetics of medicine to create abstract paintings.

“This conception of a sick person as weak is disablement from society,” Benus said, “not from something that’s wrong with me.”

Benus’ use of abstraction, in his words, help concepts like intimacy, pain and time find a space in the visual, but also tangible.

“I’ve been experimenting with a more physical and textile method to show my work,” Benus said. “My work is sight-driven, which is inaccessible to those who are visually impaired. So a more tactile piece of art is more inclusive.”

As the artists pack up their belongings for the day, McGregor makes one thing very clear.

“We really want the residency to be a time and place for exploration,” she said. “It will be a chance for visitors to see that process as well.”