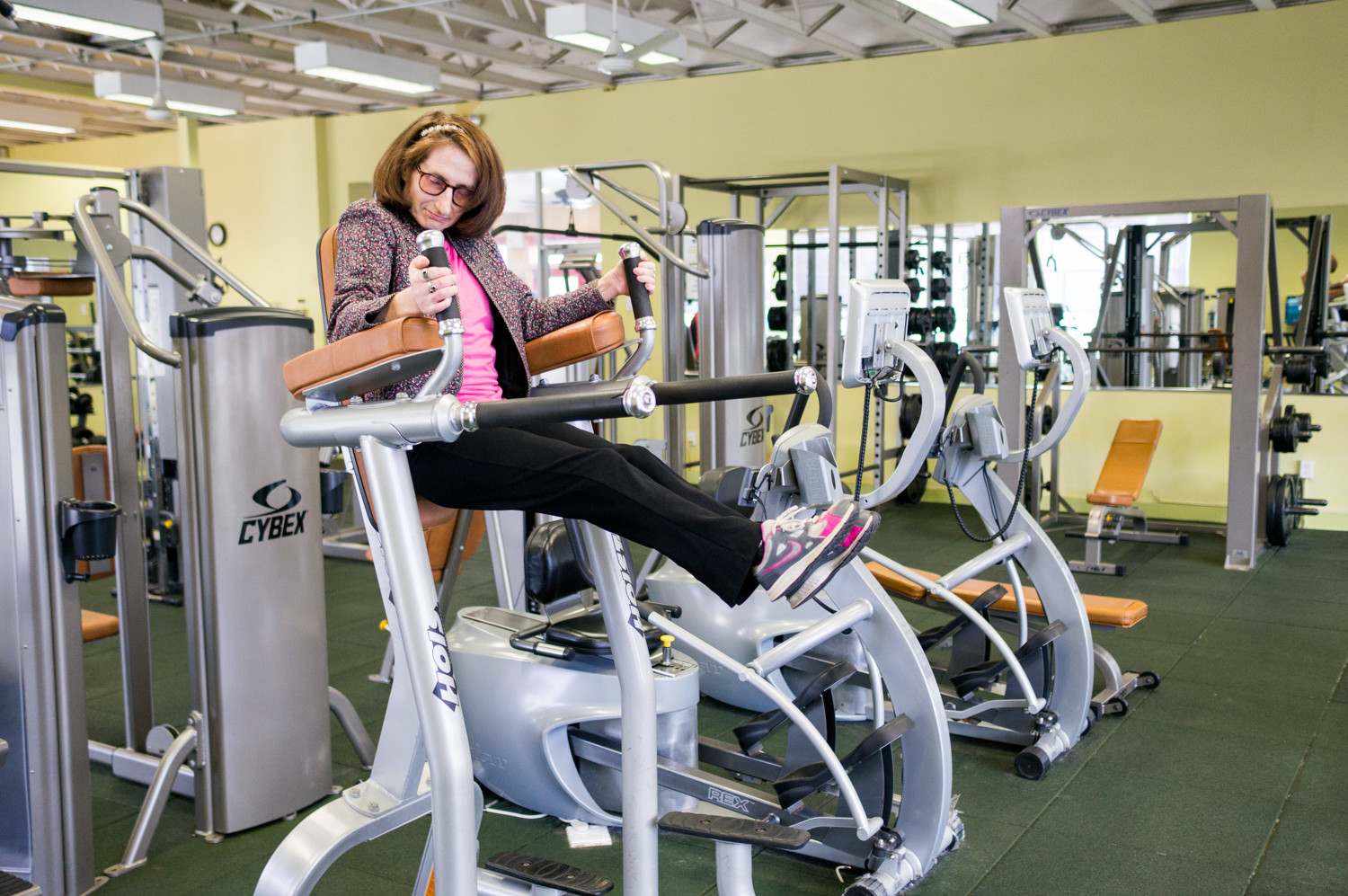 Judy Fettman does leg raises in the health club at the Skyview-on-the-Hudson co-op in North Riverdale. Fettman lives with familial dysautonomia, a genetic condition that affects the development and survival of certain nerve cells and occurs primarily in people of Ashkenazi Jewish descent.
JULIUS CONSTANTINE MOTAL 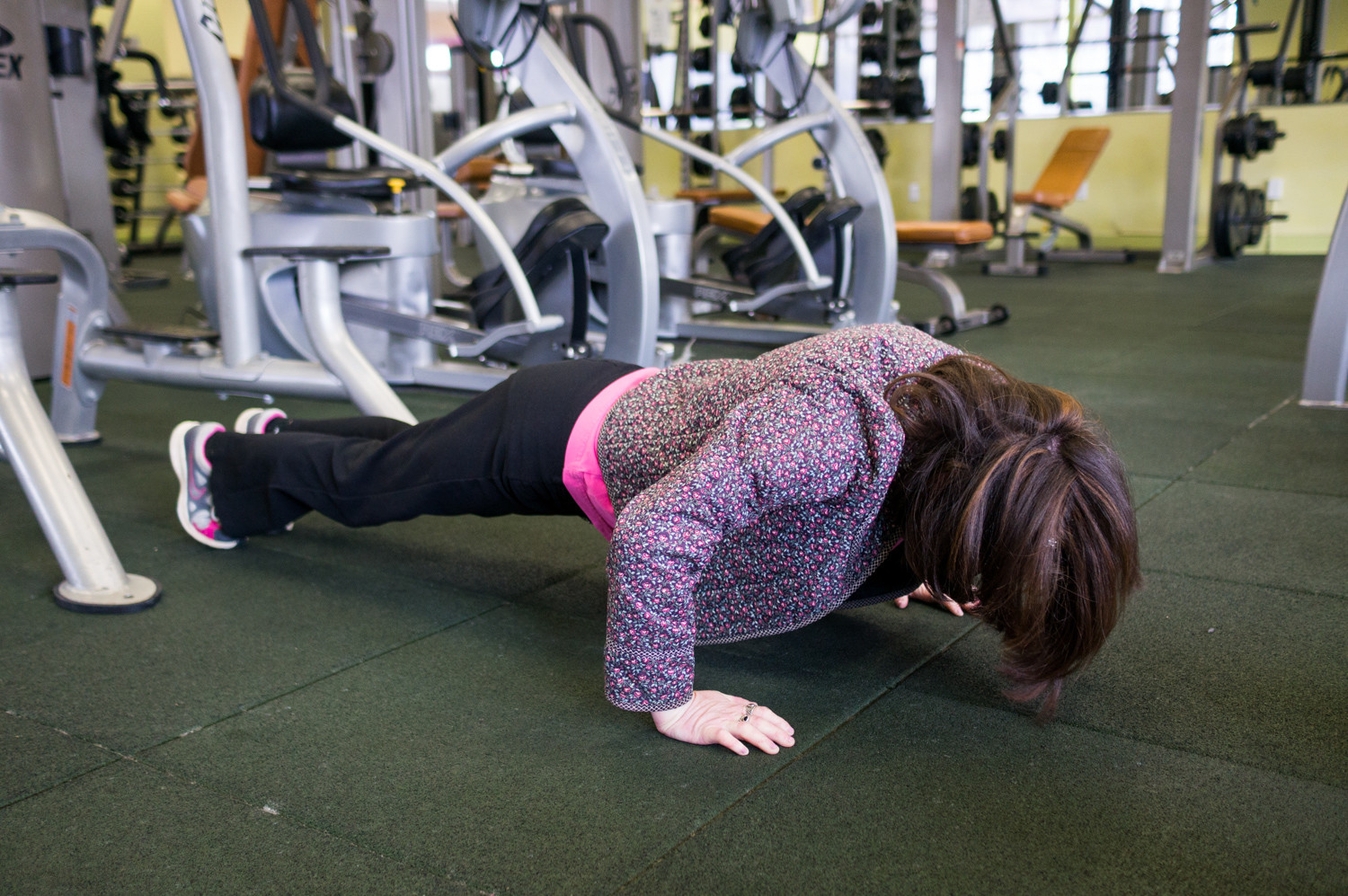 ‘People think I'm this weak little thing, but when I say that I can exercise, people don't believe me,’ said Judy Fettman, an Ashkenazi Jewish woman who was diagnosed with a genetic disorder, familial dysautonomia, when she was nine months old. Fettman has always loved to exercise, saying it improves her quality of life. ‘I try to find something fun every day.’
JULIUS CONSTANTINE MOTAL 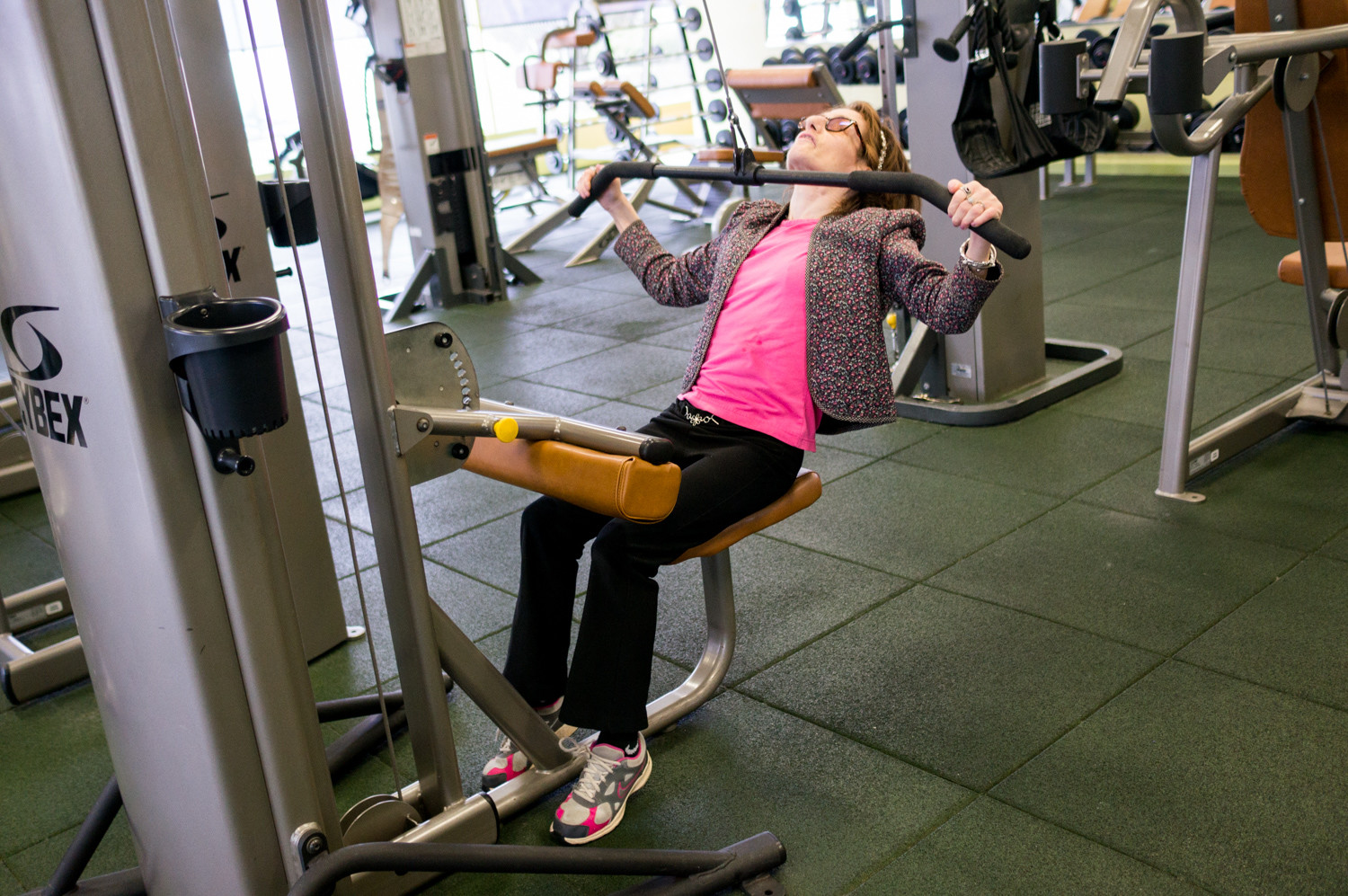 ‘This is my mom's favorite,’ said Judy Fettman, an Ashkenazi Jewish woman, of the lat pull-down machine. Fettman has familial dysautonomia, a genetic disorder more prevalent in the Ashkenazi community than in the general population. She calls North Riverdale’s Skyview-on-the-Hudson co-op home, where she lives in an apartment a couple floors down from her parents.
JULIUS CONSTANTINE MOTAL 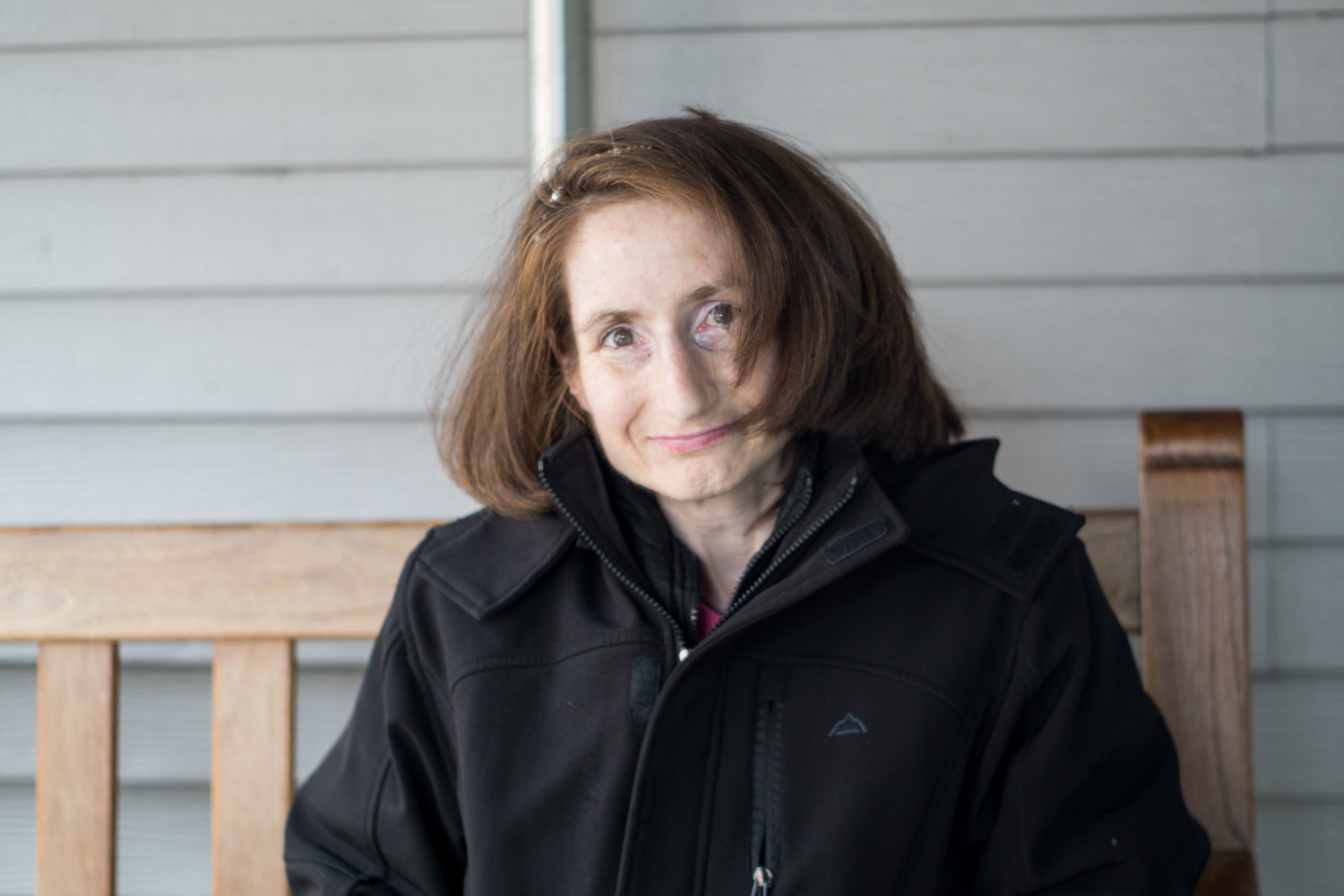 Judy Fettman has familial dysautonomia, a genetic disorder that disproportionately affects Ashkenazi Jews. She has lived in North Riverdale’s Skyview-on-the-Hudson co-op for 33 years, where she’s married, has a dog and enjoys creating artwork.
JULIUS CONSTANTINE MOTAL
Previous Next
By ZAK KOSTRO

She may not call herself an exercise fanatic, but Judy Fettman loves to get a good sweat going. That’s why she makes it her business to show up at the health club at North Riverdale’s Skyview-on-the-Hudson as often as she can.

A resident there of 33 years, Fettman combines leg raises, lat pull-downs and a brisk trot on the treadmill for a full-body workout.

Given her rigorous exercise routine, it may come as something of a surprise Fettman lives with familial dysautonomia, a genetic disorder that affects the development and survival of certain nerve cells, disturbing cells in the autonomic nervous system, which controls involuntary actions like digestion, breathing, shedding tears, and blood pressure and body temperature regulation, according to the U.S. National Library of Medicine.

The disorder also affects the sensory nervous system controlling taste and the ability to feel pain, heat and cold.

While Fettman devotedly sticks to her gym schedule, some of the most common day-to-day activities — like taking the subway to get to other parts of the city — are a significant struggle, or not even doable. Instead of the 1 train or the Bx7 bus, Fettman gets around using Access-A-Ride, the Metropolitan Transportation Authority’s answer for people with disabilities who struggle with typical mass transit options.

“The problem is my balance,” said Fettman, who relies on a walker. “I can go across the street, but I can’t go long distances alone. I can do exercises, yes, but in an area I know and where I feel safe. But I can’t do the everyday things other people do on their own. I can’t go to the store myself.”

How does that make her feel?

“Horrible. I hate that,” Fettman said. “I’d love to be more independent and be able to get places and do things” on my own.

‘Everyone is a cousin’

Familial dysautonomia is not common. In fact, it occurs primarily in people like Fettman, of Ashkenazi Jewish descent, affecting about 1 in 37,000 people in Ashkenazi Jewish populations, according to the National Library of Medicine. But it’s extremely rare in the general population.

And it’s not the only genetic disorder that occurs more frequently among Ashkenazi Jews, who can trace their ancestry to just 350 people. According to a 2014 study in Nature Communications journal, this particular population creates genetic similarities so acute “everyone is a 30th cousin,” Columbia University professor Itsik Pe’er, one of the study’s researchers, told the website Live Science.

“Most Jews in the U.S. are Ashkenazi, although of course not all so,” said Thomas Gardner, rabbi at the Riverdale Temple, a Reform congregation. “I’d say a majority of Ashkenazi Jews, their bloodline probably is completely Ashkenazi, with the exception of those who may have a parent who wasn’t Jewish or wasn’t Ashkenazi. That’s because if you go back a few generations, there wasn’t a lot of intermarriage. There was some mixing of genetic material, but comparatively little. So it wouldn’t be hard for you to find someone of pure Ashkenazi bloodline in Riverdale.”

Because of specific gene mutations passed from generation to generation, Ashkenazi Jews are at higher risk for certain diseases, including not just familial dysautonomia but also Parkinson’s.

Given there are a number of genetic mutations that disproportionately affect Ashkenazi Jews, Gardner said, when he officiates at weddings, he encourages the bride and groom to take a genetic test.

“There are a number of troubling genes that are overrepresented in the Ashkenazi community, and if both sides of the marriage have that mutation, it could be very troubling for their children, and really should be something they watch out for in advance,” Gardner said, adding that in the last several years, more rabbis have been urging the people they marry to get tested.

What can be done?

But Ashkenazi Jews’ unique genetics also offer researchers a wealth of data that could help find a cure, and the Michael J. Fox Foundation for Parkinson’s Research has launched a study inviting people with Parkinson’s to contribute genetic data into a database and specimen banks in an effort to do just that.

The study focuses, in part, on the glucocerebrosidase — or GBA — gene mutation associated with Parkinson’s, and especially prevalent among Ashkenazi Jews, according to the American Journal of Human Genetics.

Barbara Robinson is an Ashkenazi Jewish woman who, along with her husband Jay, has the GBA mutation. Although the Robinsons are not diagnosed with Parkinson’s, they still chose to participate in the foundation’s study, she said, because they have three very close family members who are — or were.

“My father-in-law died from complications from Parkinson’s disease, and I’m watching my brother deteriorate before my eyes, and it’s tragic,” Robinson, an obstetrician-gynecologist who lives outside Chicago, said.

There are problems on many levels, she said, not the least of which that she or her husband could develop Parkinson’s.

But there’s also the question of what can be done. That’s why the Robinsons started participating in research toward a cure, or at least better predicting which people were at greatest risk for developing the disease so that it could be detected earlier.

Through fundraising and the foundation, Robinson said, she and her husband discovered testing involving Ashkenazi Jews.

It all starts with finding out whether a person carries one of two gene mutations prevalent in the Ashkenazi population, Robinson said. One is the GBA mutation. The other is the LRRK2 — the leucine-rich repeat kinase 2 — mutation discovered in 2004 that is the greatest known genetic contributor to Parkinson’s disease, according to the foundation.

And when Barbara and Jay both tested positive for at least one of those gene mutations, Robinson said, they were deemed eligible to participate in the study designed to look for predictive markers of Parkinson’s. They now undergo various tests twice a year, contributing biosamples and helping scientists gather data.

“People ask me, ‘Why do you do this?’” Robinson said. “‘Is it going to help you?’ And the answer is, ‘No, it will probably not help me. But it might help my children — or somebody else’s children.’ And that’s the best thing that I can do to help fight this disease, is to help prevent — maybe — other people from getting it. And the only way to do that is to get information, data, and learn as much as we can, so that other people can study it and hopefully get answers.

Being part of the study, Robinson said, has fundamentally shifted her outlook on Parkinson’s.

“You feel so helpless with a disease like this, as you watch the deterioration, and participating in research is a way to not feel so helpless,” Robinson said. “That maybe, in some small way, I am actually not completely powerless and can contribute to the fight.”

If anyone is a paragon of that kind of resilience, it’s Fettman.

Diagnosed with familial dysautonomia when she was just nine months old, Fettman didn’t become aware she had it until she was 16.

“I always thought there was something wrong with me,” Fettman said. “But I didn’t know what it was.”

She learned to cope.

“It’s very challenging,” Fettman said. “It’s like everything is affected by it — your eating, your breathing. The way you walk, just everything. There’s not one day, or not even one hour, that goes by that you don’t think about it.”

But even living with the disease, Fettman said, “I basically live a good life. I’m married. I try to find something fun every day — going to the gym, relaxing, talking with people on the phone. I do artwork. Now, I know how to take care of myself.

“Everyone has to. I mean, who doesn’t? I just have to keep plugging along.”