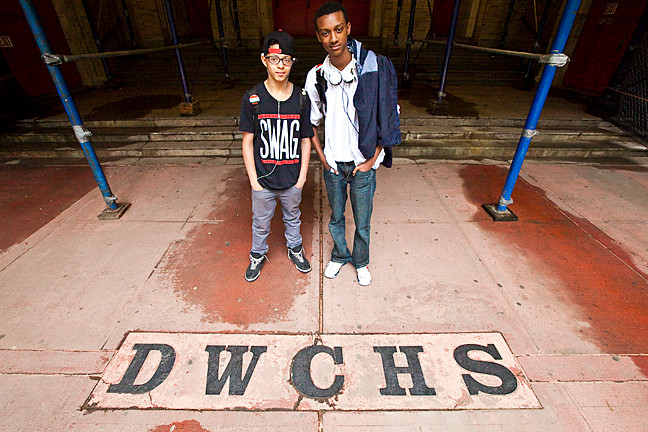 Freshman Hector Castro and T.J. Silver, both 15, have positive reviews for their first year at DeWitt Clinton High School — which many feared would be the institution’s last.
Marisol Díaz/The Riverdale Press 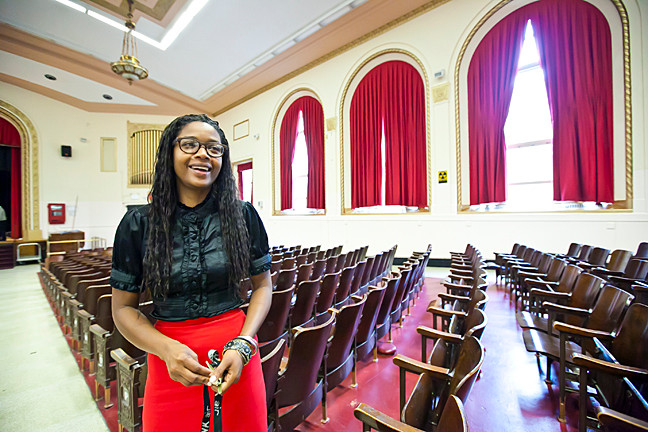 A year after Principal Santiago Taveras took the helm at DeWitt Clinton High School, many students say the “Castle on the Parkway” feels like a different school.

“Last year, it was more like a prison,” said sophomore Alexander Cuesta, 15. “It got way better.”

Three consecutive Fs on Department of Education (DOE) Progress reports left many thinking the school was doomed to close. But on a recent afternoon, students described a school with a revitalized atmosphere — notwithstanding a March brawl that broke out following an incident between two ethnic groups.

Mr. Taveras confirmed the incident, which led to the arrest of global studies teacher Jack Israel. Mr. Israel was charged with assault and resisting arrest after he allegedly grabbed a police officer’s arm as the officer broke up a fight between two students.

Students defended the teacher, saying that Mr. Israel grabbed the officer after he allegedly shoved a female student. During the aftermath, Mr. Taveras took to the overhead speaker to address students, asking them to help restore safety and respect in the school.

Pupils wrote letters to the principal with their thoughts on the racial motivation behind the brawl, voicing concerns they still had with the school. Mr. Taveras said he read the letter and is taking students’ suggestions into account.

On May 22, Alexander and his friend Deion Johnson, 16, said assemblies and pep rallies have instilled students with a long-absent sense of school spirit. They added that more help for academics and personal concerns is available, while the school itself is noticeably cleaner.

On its 2013-2014 Quality Review Report from the DOE, the once “underdeveloped” school was listed as a “developing” school.

Much of the credit, the students said, goes to Mr. Taveras’ presence at the school. Students described him standing outside the building every morning to greet students as they come in. Many said Mr. Taveras is rarely in his office, taking time to speak with students in the halls and observe classes as they are in session.