A young filmmaker dives into a derring-do documentary 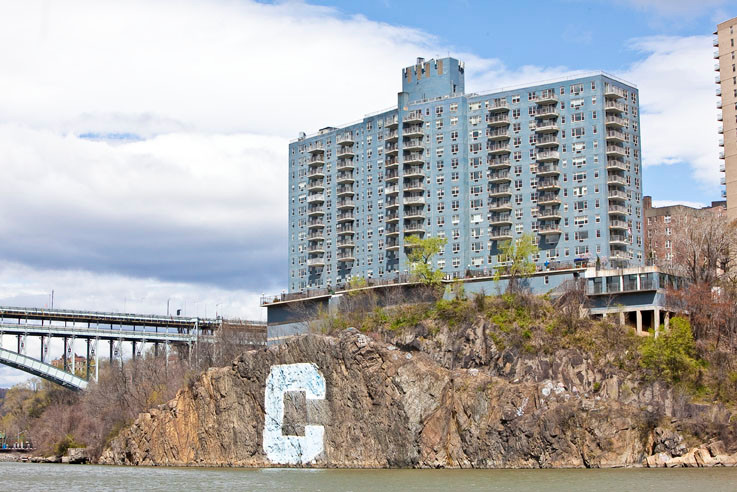 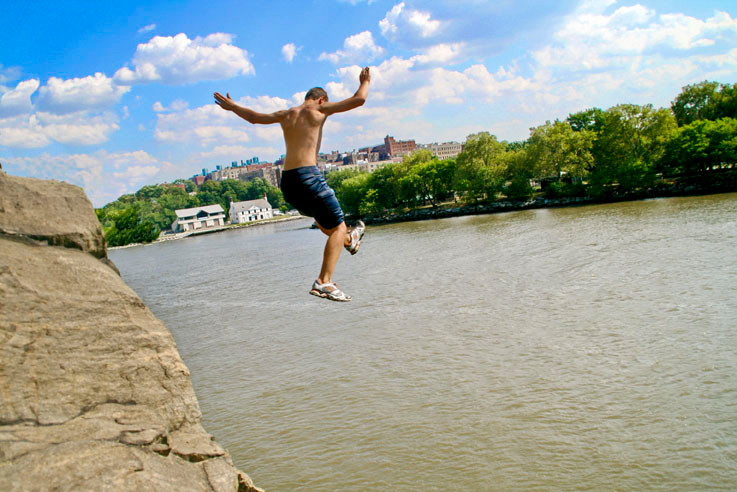 Michael Schmidt launches himself into the murky water.
Photo by Anthony Scala
Previous Next
By Adam Wisnieski

For generations, it has represented summer, freedom and a rivalry over who takes the steepest risks and who are the biggest wimps among local teens.

Now 27-year-old filmmaker Jordan Roth is attempting to capture the dangerous ritual — in which kids jump into the water from a massive shard of rock that towers between the Harlem River Ship Canal and Metro-North’s tracks — in the documentary C-Rock.

“It’s about being a kid … it’s about accessing a much simpler time when you can just act like a kid and you can do something a little dangerous. I think you lose some of that when you grow up,” he said.

Last summer, Mr. Roth spent a few weeks along the canal between the Broadway and Henry Hudson bridges to gather footage.

He hopes the documentary film, currently in post-production, will be ready to enter into festivals by the end of the summer. Mr. Roth is now busy editing and fund raising.

C-Rock is a real New York story, said the filmmaker, who was born in Toronto and currently lives in Chicago. He learned of the rock in 2010 when The New York Times ran an article “A Long Jump to Manhood” about the big jump off the big C.

The rock derives its name from a giant baby blue Columbia University “C”  painted by students to impress fans at the college’s Baker Field on the Manhattan side of the canal.

Pete, a classmate of Mr. Roth’s at Montreal’s McGill University, grew up in Riverdale and so Mr. Roth asked him if he had ever jumped.

Pete’s answer was no.

From illegally crossing the Metro-North tracks to the jump itself, there is no doubt it is a dangerous excursion.

That might have turned Pete off, but it enticed Mr. Roth, who thought the story of the rock would make an intriguing documentary. It is the aspiring film and television writer’s first foray into documentary filmmaking.

“For me, making the documentary was very much a leap,” he said.

But it was a story he felt he had to tell.

The name of the rock has changed over generations, from “The Cut,” “Columbia Rock” or “The Rock,” to what kids now call “C-Rock.” The names jumpers give to each height from which they can catapult themselves into the Spuyten Duyvil Creek — ranging from 15- to what is estimated to be 80-foot peaks — have also changed with the times.

Kingsbridge resident Denis O’Flynn, 45, remembers “Al Capone’s Chair,” “Little Jazz,” “High Jazz,” “High Cables,” “Medium Cables,” “Low Cables,” “The Point of No Return” and the “Jungle.” He said the highest jumping point was called the “Hump.” He jumped that with friends in the late 1970s.

“Jungle” is still in use. “The Wheel” and “Basketball Diaries,” named after the 1995 movie featuring Leonardo DiCaprio that made the rock famous, are used today.

“You play stickball, go for a swim and come back and play stickball again,” Mr. O’Flynn said. He said he loves that kids still jump, but added the cautionary note that is probably a symptom of his non-teenage years: please be careful.

Jim Carroll’s 1978 memoir The Basketball Diaries (which the film was based on) talks about the Upper Manhattan teen tradition, describing the end goal of jumping from the highest point called “Hell’s Angel.”

Nowadays, Mr. Roth said almost all of the kids he encountered during filming last summer were from the Bronx. This newest crop of jumpers call the highest peak, “The Top.”

North Riverdalian James Gallo, 15, described it as something that has to be done.

James was interviewed for the film and said competition is part of what fuels him to jump from the rock’s heights. “It’s a constant feud,” he said.

Recently, some trash talking between South and North Riverdale kids was on display on the documentary’s Facebook page.

When Mr. Roth visited the spot to film last summer, teens pressured him into jumping.

“I was on the cliffs, my crew was on the boat and there’s all these kids just yelling at you to jump and I was really scared, but I had to jump,” he said.

Mr. Roth described the jump as “a moment of complete freedom.”

“It’s high enough that you can have a distinct thought process as you’re leaping and before you hit the water. There’s a moment where it is just incredibly freeing and I do understand why the guys jump,” he said.

For more information on the film, go to www.facebook.com/CRockDoc or its fund raising site, www.indiegogo.com/C-RockDoc.