Angellyh Yambo: A Bronx ‘princess’ for all time 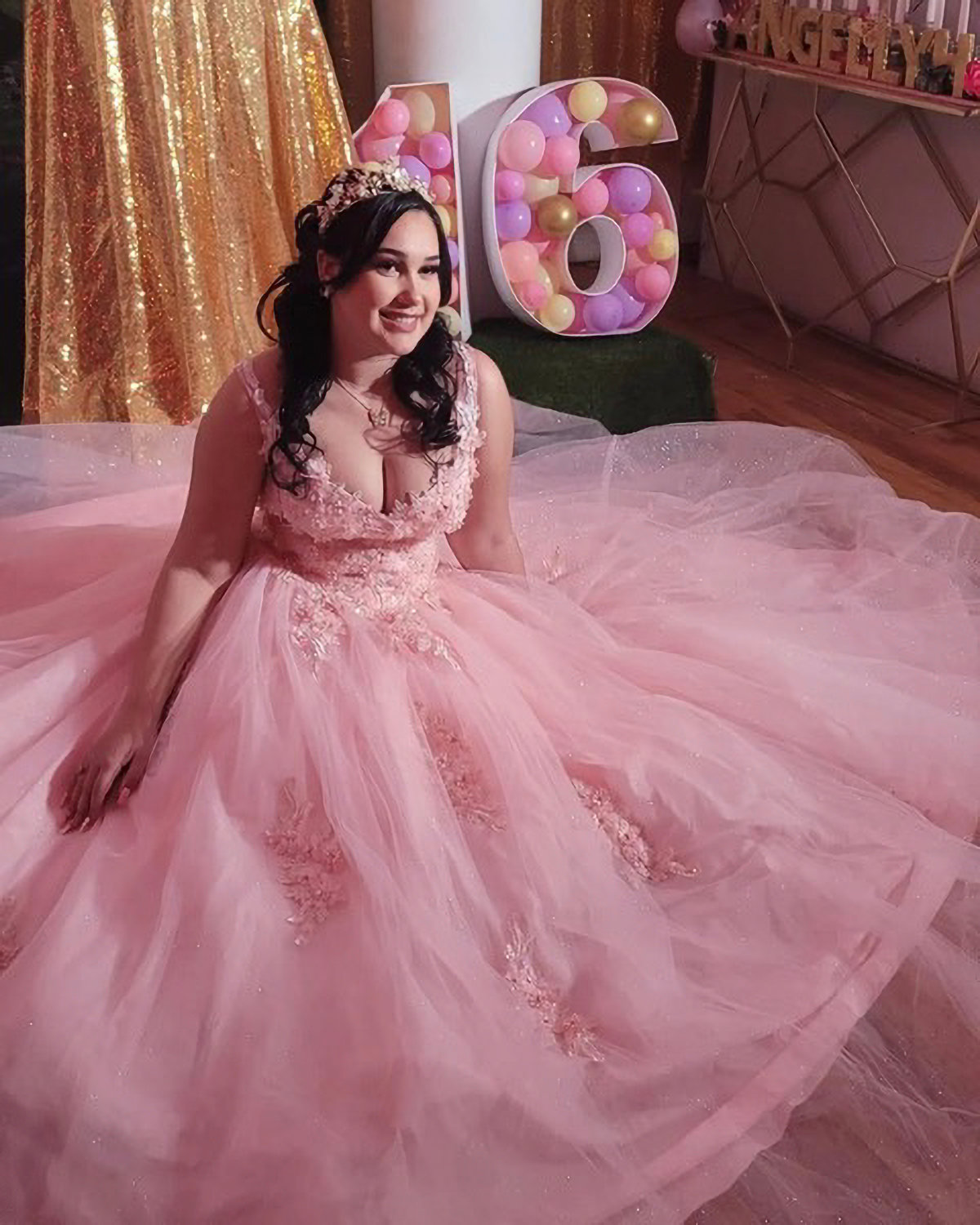 Angellyh Yambo is all decked out in her sweet 16 dress during her party in January. The event was a coming out of sorts for the teen, who was a bit shy.
Courtesy of the Yambo family 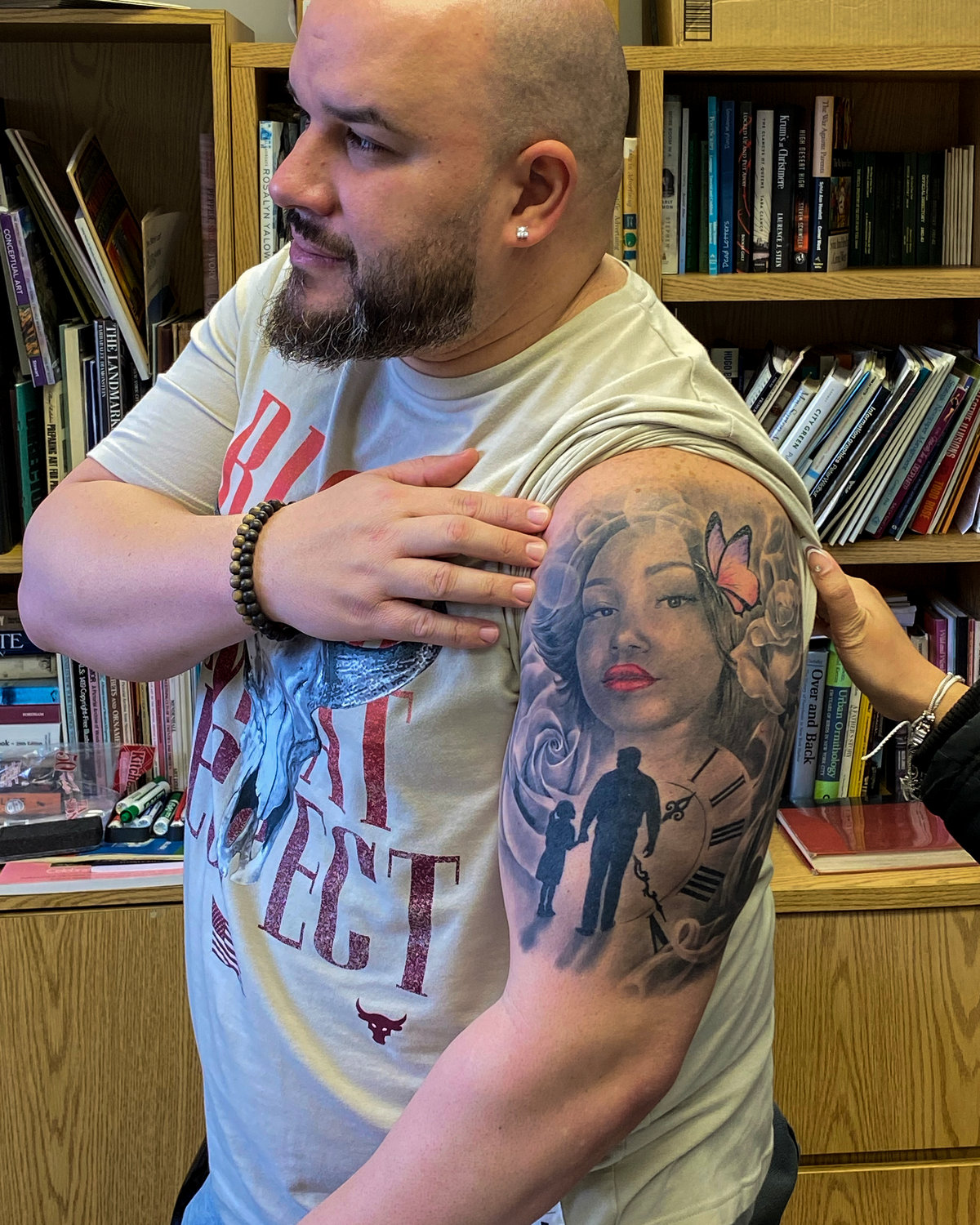 Manuel Yambo, father of the late gunshot victim Angellyh Yambo, shows off the tattoo of his daughter he got recently.
GARY LARKIN 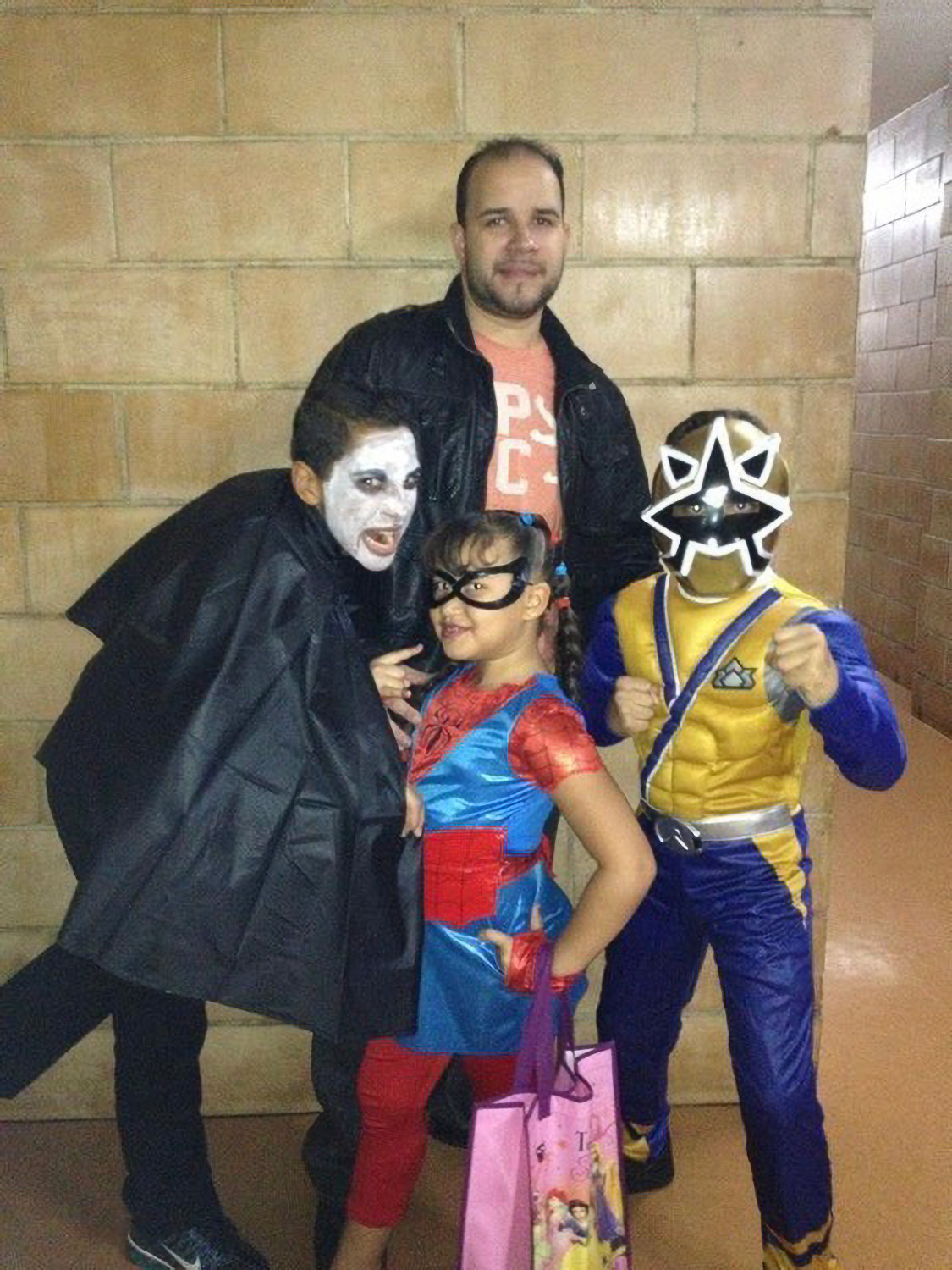 A much younger Angellyh Yambo on Halloween with her family. She would regularly visit her dad's workplace for trick or treating. Manuel Yambo is a night doorman at The Glen Briar co-op in Riverdale.
Courtesy of the Yambo family
Previous Next
Anatomy of a homicide

At about 1:40 p.m. on April 8, 2022 in front of 510 E. 156th St. across from the South Bronx Education campus in Mott Haven, an argument between two young men broke out at a bodega. The dispute led to one man pulling a “ghost gun” on the other and shooting that hit three bystanders across the street.

One of the victims was Angellyh Yambo, 16, of the South Bronx, an honor student at University Prep Charter High School, was fatally stuck in the upper back. A 17-year-old boy and 17-year-old girl were wounded in the left leg and left buttocks, respectively, according to the Bronx district attorney’s office. The bullet that struck Yambo pierced her lung and pulmonary artery, causing her to die.

The alleged perpetrator, Jeremiah Ryan, 17, was indicted on murder, attempted murder, assault and criminal possession of a weapon in the shooting. His court case is underway at Bronx Supreme Court.

“The defendant, sadly, is also 17 years old, and he allegedly used a ‘ghost gun,’ a firearm made from components purchased online, with no serial numbers so they are not traceable,” Bronx DA Darcel Clark said in announcing the indictment May 17, 2022. “These weapons are a major threat to public safety and are being used in crimes more and more in our city.”

The New York Post reported a ghost gun was recovered by police in a black bag in a nearby yard after the shooting. It was described as a Polymer 80 9mm gun. The 40th Precinct reported six shell casings were recovered from the corner of St. Ann’s Avenue and East 156th Street following the shooting, which took place across from Mott Haven Village Prep and University Heights Secondary School. The school Yambo attended is a short distance away.

According to the Centers for Disease Control, 2020 marked the first time deaths from firearms topped motor vehicle fatalities. In that year, the CDD reported 45,222 people died from firerarms compared to 40,698 from motor vehicles. The rate of deaths per 100,000 people was 13.7 for firearms deaths and 12.4 for motor vehicle deaths.

The National Gun Violence Memorial has measured 112,600 deaths and counting on its website gunmemorial.org since it was founded in 2015.

Putting on makeup for the first time. Drawing sketches and doodles. Staying home to spend time with her family in the South Bronx and visiting her dad in Kingsbridge.

These were just some of the things Angellyh Yambo did in her early-mid teens as she was starting to break out of her shell. And the most important event of her life had taken place during a snowstorm last January. Her sweet 16 party made the University Prep Charter High School freshman feel like she was on top of the world although she worried nobody would come.

One look at the video and photos from that Jan. 28, 2022 party showed her glow as she walked around in her glittery dress wearing her tiara and a butterfly necklace as the partygoers did not disappoint.

She looked like the princess her dad, Manuel Yambo, always envisioned. She would often visit her dad at The Glen Briar co-op on Kappock Street in Riverdale where he is a night doorman.

“She was funny,” he said. “She was like me. Crazy like me. She had a good sense of humor. She was always at home into her makeup and stuff. I used to call her my princess.”

When she was just 6, the shy and reserved Angellyh began to socialize and share her radiant spirit on the softball diamond even though it wasn’t her favorite hobby.

“I thought she was not so thrilled to be playing softball,” said her South Riverdale softball Little League coach Jason Ehrenberg. “But she did enjoy hanging out with her teammates and having fun. I remember how excited she was when she got her first hit.”

He also remembered how she and her friends would come to his co-op at The Glen Briar on Halloween.

Unfortunately, this young princess was only able to “reign” for a short 10 weeks as Angellyh was gunned down near her high school on April 8 as she was leaving for the day. She was one of three victims of yet another shooting in New York City. The bullet that struck her upper back was lethal. She immediately fell to the ground on East 156th Street near St. Ann’s Avenue. The other two victims survived with injuries to a leg and buttocks.

“Someone called my son,” said Manuel Yambo, who lives on Bailey Avenue in Kingsbridge. “They said there was a shooting at the school. I started calling Angellyh. No answer. I was getting a little nervous.

“Her mom (his ex-wife Yanelli Henriquez of Marble Hill) called me and said Angellyh got shot and was killed. I freaked out. I was like there’s no way that happened.”

Shortly after the shooting police arrested Jeremiah Ryan, 17, on charges of murder, attempted murder, assault and criminal possession of a weapon, he was remanded into custody. As an adolescent defendant, he still faces a more lenient sentence of up to 15 years in prison if convicted rather than the 25-years-to-life he would have faced as an adult, according to a New York Post report.

“This kid who shot Angellyh was playing with guns since he was 12, according to the NYPD,” Angellyh’s great aunt Mary Hernandez said. “The parents had to be aware.”

Over the next five months, people remembered Angellyh’s life in different ways. The funeral at Williams Funeral Home drew about 400 people and two anti-gun walks were held — one on June 4 and another on June 8.

“The school (University Prep) had a walk (June 8) where people held up ‘Stand up for Angellyh’ signs,” said Kristina Yambo, Manuel’s current wife. “They made up thousands of signs. Some of my colleagues saw the signs and joined the walk.”

Then, Manuel decided to remember his daughter in a way he thought was best. “When I was a kid, my mother would not let us mark our skin with anything,” he said. “Then, one of my brothers got a tattoo of my daughter.

“So, I decided I would do it. It’s a portrait of Angellyh with lipstick, me and her walking hand in hand to signify that I will join her again. There was also a butterfly near her ear. She always loved them.”

The tattoo has a charcoal-like background including Angellyh’s sketch and a clock set at 1:24, which represents her birth date of Jan. 24.

One way the family, including her brothers Angel, 18, Mason, 3, and Cameron, 14, her step-mother Kristina Yambo, and her great aunt Mary Hernandez, want to keep her name and spirit alive is by creating a foundation. The proposed 501(c)3 non-profit, for which Hernandez is chief executive, is designed to educate people about the dangers of firearms in both schools and homes. She is waiting for approval for the tax-exempt status, which she said could take months. The organization is a registered New York state non-profit.

“This hit too close to home,” Hernandez said. “I heard these stories about kids being killed by guns. It’s going to continue. They start organizing right after a shooting and then nothing changes in the Bronx.”

The Angellyh Yambo Foundation is designed to bring anti-bullying and self-defense classes to schools, create a way to engage with parents and youth through workshops, help prepare students for college, teach about home finances and promote and increase youth awareness about guns and gun safety.

“I want her name to be known,” Hernandez said. “I want her death to make a difference and not be in vain.”

Additionally, Hernandez wants the foundation to create scholrships through the Bronx borough president’s office. And Hernandez has reached out to Rep. Torres’ office to amend the 1990 gun-free school zones act to increase the mandatory minimum sentencing and expand the zones.

Shortly after Angellyh’s death, Torres announced he proposed a ghost gun bill that would allow individuals and families affected by ghost guns to file lawsuits against the manufacturers. That bill is in committee.

Her step-mother, Kristina, noted how Angellyh will have accomplished her wish to be famous, albeit in death.

“She is buried in Woodlawn Cemetery near Celia Cruz (a Cuban-American singer), right next to the star,” she said. “Angellyh’s name will now be known through this foundation.”