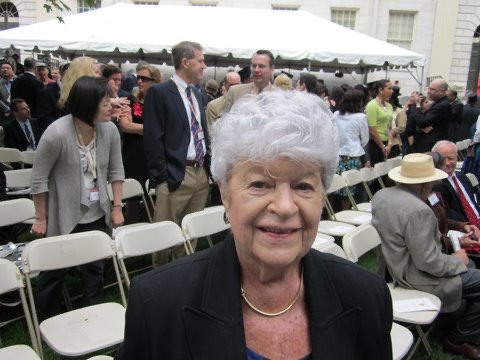 Anne Klaber (nee Rosenbaum) passed away peacefully on April 26, 2020, in Buffalo Grove, Illinois. She was 96.

She was the beloved wife and best friend of the late Max, and the cherished and loving mother of Stephen (Mona). She was the treasured and very proud grandmother of Andrew (Jackie) and Robby (Deena), and precious great-grandmother of Nathan. Dear sister of Ina (Les) Sterling.

She was born in Schoeppenstedt, Germany. She emigrated from Germany in August 1941 on the last boat to bring Jews from Nazi-occupied Europe to the United States.

She lived on Netherland Avenue in Riverdale for 58 years before moving to be near her family in Buffalo Grove. She was an active member of the Conservative Synagogue Adath Israel of Riverdale, where she served as treasurer of the Sisterhood.

She learned to drive at 62, and it gave her great joy to drive elderly congregants to the synagogue.

She went back to work once her son got married, and she became an outstanding bookkeeper with a tremendous work ethic.

She was a beacon of love, strength and kindness to her family. She never said a negative word about anyone, and in turn, was loved by everyone who knew her. She had a real “can-do” spirit, and was the epitome of a positive attitude.

She was an art lover, gourmet cook, and the embodiment of “class.”

She will be forever in our hearts.

Graveside services were held in New Jersey, and the shiva was private.

Donations may be made to the Alzheimer’s Association at Alz.org, the Hebrew Immigrant Aid Society at HIAS.org, or the UJA-Federation of New York at UJAFedNY.org.