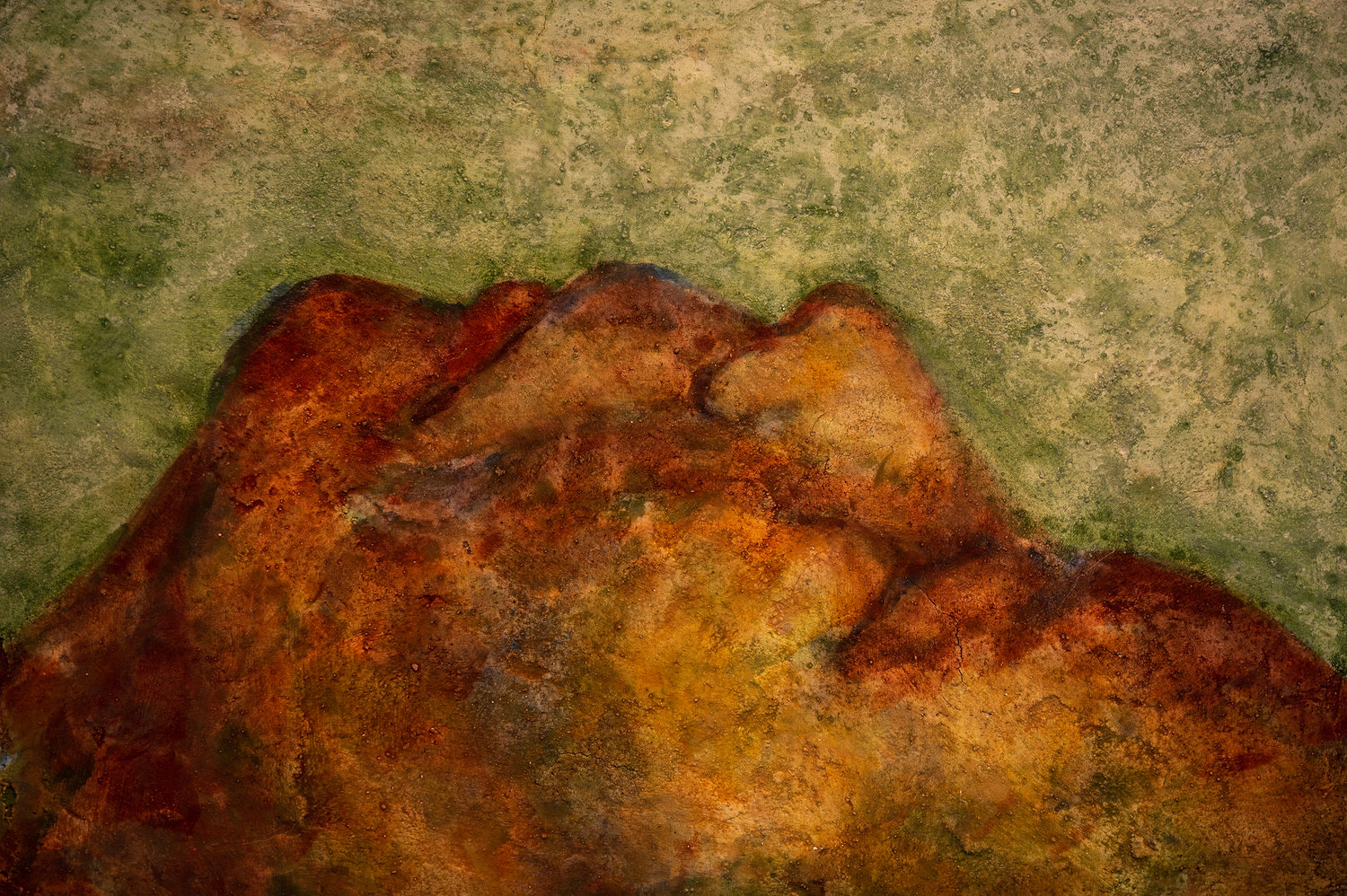 Fresco paintings by Hudson based artist Maryna Bilak’s exhibition of “Care” portrayed and inspired by her mother-in-law Dorothy Hunt who fought Alzheimer’s in 2014 and ultimately lost half a decade later. “Care” is currently in the Defner Judaica Museum and the art collection at the Hebrew Home in Riverdale.
Hiram Alejandro Durán 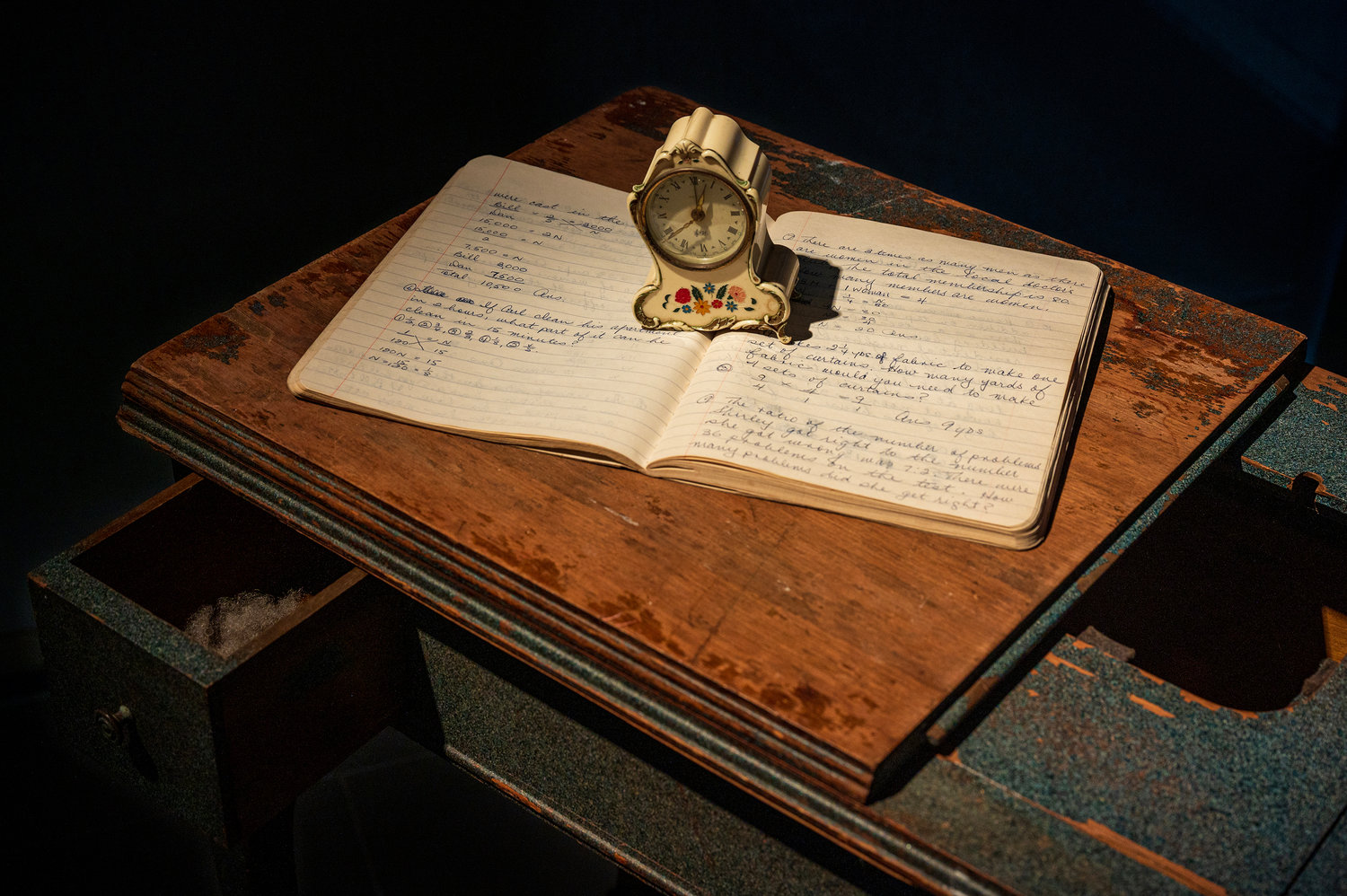 Here is 'Dorothy’s table,' which was a testament of which she was before she was diagnosed. On the table is a book of math equations from a class she took.
Hiram Alejandro Durán 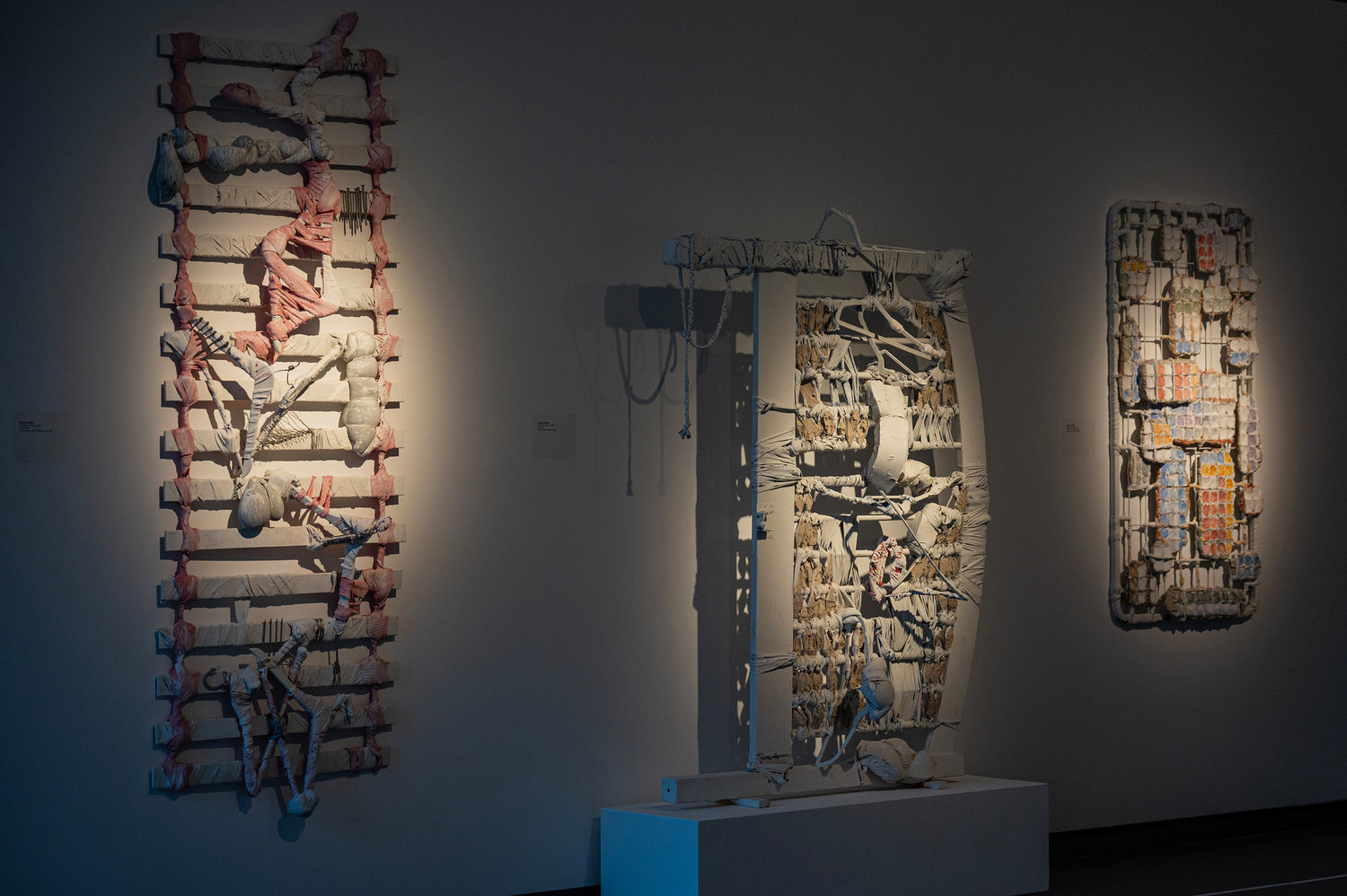 Plaster was a medium that Maryna Bilak used during her experience for caring for someone. “Caring hands” are hands of people who helped Bilak and her husband care for Dorothy.
Hiram Alejandro Durán
Previous Next

I thought if I tried to put myself into different roles, maybe it will help us run our lives more smoothly.”
MARYNA BILAK, artist
When to visit

‘Care’ by Maryna Bilak is on view in the Riverdale Hebrew Home by RiverSpring Living located in its museum through Thursday, Feb 19.

As a 15-year-old living in Ukraine, Maryna Bilak considered herself a serious artist. Decades later, the 38-year-old from Hudson has been making good on that aspiration.

Her latest body of work focuses on someone near and dear to her — her late mother-in-law, Dorothy Hunt. She has an exhibition about Hunt, which involves several media, at the Derfner Judaica Museum in the Riverdale Hebrew Home by RiverSpring Living.

Before she married Maurice Haughton in the United States, it was a difficult time for him as his mother, Dorothy Hunt, was diagnosed with Alzheimer’s disease in 2014. She eventually succumbed to the disease at 82 in 2019.

The couple wound up being caregivers for Dorothy.

At the same time, she had just received her master’s degree from the New York Studio School and stayed longer to pursue another. In her Manhattan studio, she unwittingly was working on a project.

“That was the time she (Dorothy) started refusing her clothes — which is so common for people with that disease. We would go for a walk every day,” Bilak said. “She would start undressing, taking her belt off, claiming it’s not hers, and I was trying to stop or at least collect the stuff.”

She collected items from a series of prominent life events and made them into art. The work became a process of dealing with the disease from both viewpoints of the patient and caregiver. In the exhibit “Care” Bilak displays Dorothy’s shirts and bed frames separated from the headboard.

Many of the pieces were fresco paintings, which means fresh in Italian. It comes from a method where the plaster is still wet on the wall. Bilak said the painting technique is “time sensitive” as it dries quickly. She tries to complete an individual piece in one day.

The method to her art

Instead of throwing things out, she took them back to her studio and experimented. For example, Dorothy had to replace her bed over time for different reasons, because they moved and it didn’t fit, or she needed to replace it for the height.

Bilak couldn’t explain or give specific detail to The Riverdale Press about the time she started because it was extemporaneous.

She did recall the earlier pieces of her mother-in-law.

One was a poured plaster sculpture — with the main element of a black shirt that Dorothy decided not to wear. At the time, Bilak was learning how to use plaster and she tried to experiment. She cut the fabric to manipulate the shape and sewed it together.

“Bed II” has elements of bed slats meant to resemble a bed frame. Bilak attached a red sweater and painted pink over it. Bilak said it was easy to manipulate because it was “stretchy.” Clothes hangers are also tightly tied to it.

“It’s just something as an artist I wanted to try. It used elements I saw from my everyday life.”

While looking at her studio surrounded by pieces of memories, she explains in a press release, “realizing that my life of caregiving ... (was) on the walls looking at me.”

After the conscious decision to embrace her own work, Bilak didn’t want to run away. She told herself, “OK, this is it — this is not going away. “She began fresco paintings of Dorothy to get closer to specific moments in her life.

Bilak told O’Leary that this body of work was meant to survive, stay mentally healthy and reflect.

The stories behind
the pieces

Before she begins, Bilak places photographs on the table in her studio and she will draw it out on a piece of paper, which is a good start for a composition, Bilak said.

Some are portraits, body parts such as eyes, hands, feet and mouth.

Beginning in 2018, Bilak used Dorothy as a model for mostly fresco paintings and sculptures.

“While Dorothy posed for me by simply resting in her wheelchair I sculpted directly from observation,” Bilak said.

Very few of the fresco paintings are from observation though. Instead, Bilak used photographs, mostly taken by her husband through him collection of thousands of photos.

The process also includes, drawings and memories to guide her. The artist said she grew to know Dorothy’s face by heart.

Some of the paintings is her, “Zooming in period” such as body parts of eyes, hands, feet and mouth.

She explained “Dorothy’s Lips” represented Dorothy’s screams. While she screamed, her mouth was vivid and almost served as a center point for what she was.

For her “Eye Go,” Bilak saw the fear in Dorothy’s eyes. Sometimes her eyes would be wide open, and nothing would calm her down. The way how Dorothy viewed the world was distorted and in pieces.

There is also a full portrait of Dorothy holding her granddaughter Irina with her son Maurice watching over her. Bilak said this was a moment Haughton was dreaming about because he felt that they were losing her.

“For that moment, it was very short, that he felt like (some life in her eyes) that she was there accepting the child,” Bilak said.

Bilak’s work captured several moments when Dorothy was “there,” which was usually during major life events.

“Dance” captures a special and vivid moment for Bilak on her wedding day in 2016. Maurice wanted to dance with his mom on his wedding night, but due to her being bound to a wheelchair, he couldn’t. However, they made it work.

During this dance, for the first time, Bilak saw Dorothy’s eyes being present. The newlyweds saw the clarity, joy, and intelligence in Dorothy.

“If I go left I lose my horse, if I go right I lose my head,” was written onto a small fresco painting with the name Maurice on the top, accompanied by several other monologues by an older man, another man, and a daughter-in-law.

“I thought if I tried to put myself into different roles, maybe it will help us run our lives more smoothly,” Bilak said.

Haughton’s monologue was about finding the balance between being a good husband and a good son. Bilak said no matter what Haughton did, he would sometimes feel that it was not enough and no matter what, someone would “suffer.”

These were not real monologues. These were role-playing ideas created by Bilak to not lose herself mentally and survive as a caregiver.

As a couple before marriage, he sat Bilak down and explained to her about their future together. He understands the difficulty of Bilak being with him and caring for his mother. He also understood if she would leave. But for Bilak, she believed you won’t let that person go if you’re in love.

“I even thought to myself, ‘we are not married, right? I didn’t have to be there all the time. I could have just gone away for a while to take a break. And yet I never did it,” Bilak said.

She didn’t want to leave him alone because some tough times made Haughton resentful.

By creating these roles, she put herself in another person’s skin to try and understand their feelings.

The intimate and personal work within the exhibit explores different roles of each of Dorothy’s more than 20 caregivers. Within this exhibit, there are more than 20 small fresco paintings on the wall with someone’s name and a saying. Bilak explores that by getting into the mind of each of them.

“Each work in this show is my remedy as a caregiver,” Bilak told O’Leary. “Every brushstroke is nourishment that benefited Dorothy and continued healing me. Art making was the only thing I never gave up during five years of life with Dorothy. I wish everyone has something they love doing. It is a survival matter. Treasure it.”