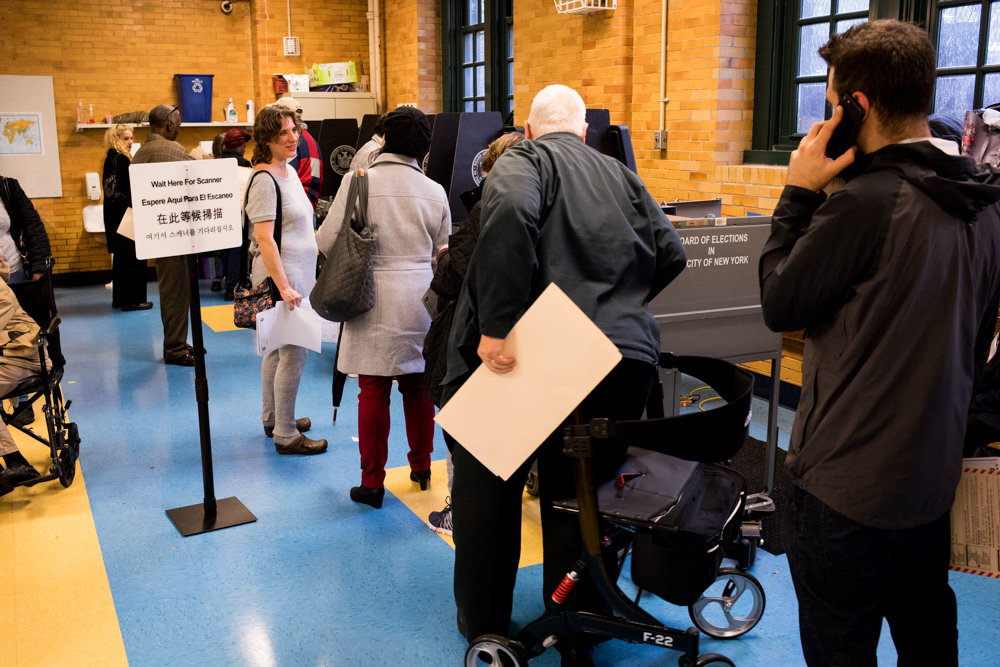 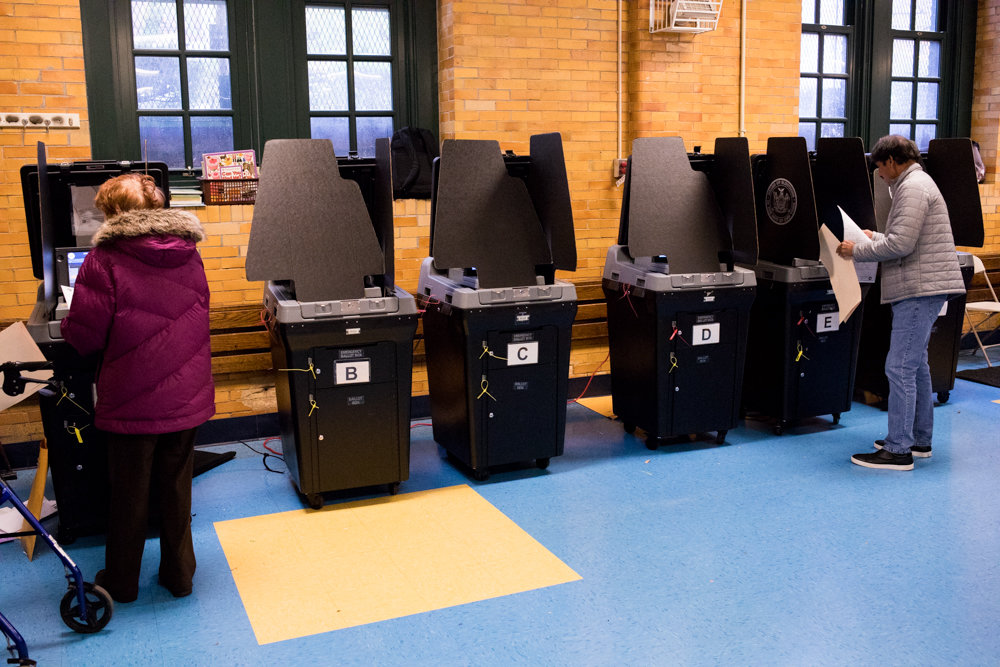 By the early afternoon on Election Day, only two of six ballot scanners were working at P.S. 81 Robert J. Christen School on Riverdale Avenue, where the line of voters snaked around the room with people waiting to scan their ballots.
JULIUS CONSTANTINE MOTAL 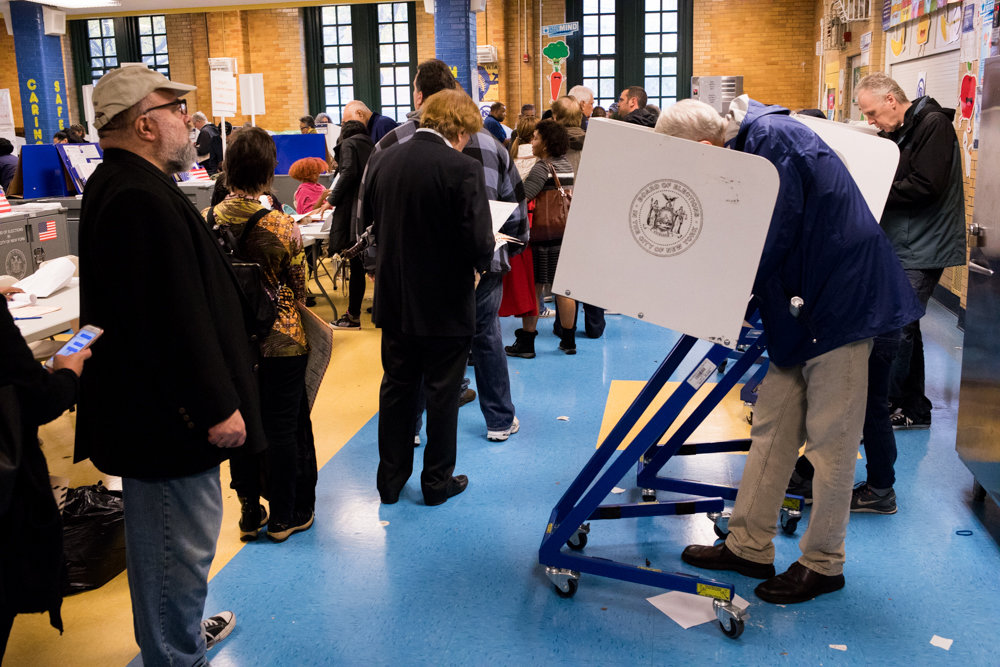 Residents fill out ballots while others wait in line to scan them at P.S. 81 Robert J. Christen School in North Riverdale. Voters around the city complained of long lines and broken scanners Tuesday, which city council Speaker Corey Johnson said had something to do with the miserable weather, according to published reports.
JULIUS CONSTANTINE MOTAL
Previous Next
By ZAK KOSTRO

Miserable weather — which has been known to depress Election Day turnout in the past — wasn’t the only obstacle impeding voters from casting ballots Tuesday.

Broken scanners contributed to the ire of voters as hundreds showed up early in the northwest Bronx to cast their ballots before heading to work. But the problem wasn’t limited to just the Bronx. Voters across the city reported problems with malfunctioning ballot scanners Tuesday morning, according to published reports, causing long delays at polling sites.

City council Speaker Corey Johnson suggested it was the wet weather itself that contributed to the scanner problems, jamming the machines. Still, Johnson called on the immediate resignation of elections executive director Michael Ryan, according to reports.

Susan Forman, who lives on Hudson Manor Terrace, ran into scanner issues at Riverdale/Kingsbridge Academy on West 237th Street. At one point, she said, only a single machine was working, causing lines around the block.

“The politicians want people to vote in these elections like crazy,” she said. “If there’s only one machine and pouring rain, I think it’s going to deter people from voting.”

Carol Spivack said at least half the scanners at RKA were out of commission when she showed up to vote a little after 7 a.m.

“Were they adequately tested before they were sent to be used?” Spivack asked. “They should’ve been really tested by a quarter after 7. That’s not acceptable. I don’t know what caused it, but it should’ve been prevented and fixed ahead of time.”

Janis Crohn — a Spuyten Duyvil resident since the 1960s — wasn’t happy with the scanner fiasco at her Knolls Crescent polling site at the Riverdale Community School, which she suspects may have had something to do with the size of the ballot.

“Obviously, the city was not prepared,” Crohn said. “I think it’s disgraceful. We’re finally getting a good turnout, with good reason, and there’s problems all over the place.”

Crohn was assured by a polling site worker the issue would be fixed promptly, but as of the afternoon Tuesday, wasn’t certain anything had changed. Leading up to Election Day, Crohn was especially eager to vote on a number of proposals placed on the ballot by the mayor’s Charter Revision Commission that could, among other things, revamp local campaign finance laws and impose term limits on community board members.

Ruth Heller, who’s worked at the P.S. 81 Robert J. Christen School polling site, reported a “terrible situation” where just one of the site’s six ballot scanners worked during an excruciating four-hour stretch between 6 and 10 a.m.

“The lines went all the way from the cafeteria almost to the front of the school,” Heller said. “Some of the lines went around twice. You can imagine the crowds.”

Heller suspects the long waits “really put a damper on” residents who rushed to get their votes in before going to work.

“I felt very bad, sort of disappointed in myself,” Heller added. “I know it’s not my fault, but you go there to help, and it’s like beating your head against the wall.”

Multiple voters also reported ballot scanner problems at The Riverdale Y, including multiple machines “broken,” angry, shrieking crowds, and ill-equipped attendants scrambling to figure out how to solve the problem.

Assemblyman Jeffrey Dinowitz called the widespread malfunctions “unacceptable and scandalous” — especially considering he’s been calling for years to have the machines replaced.

“Today’s problems should have been prevented,” Dinowitz said in a statement. “Rainy weather and high voter turnout should not be impediments to a functional election system.”

With multiple polling sites reportedly suffering from all or a majority of their scanners broken, some residents reportedly stormed off without casting a ballot because lines to scan them were maddeningly long.

“New York should be making it easier to vote in every possible way,” the Assemblyman said. “This includes scrapping the scanners and getting new voting machines, preferably similar to the old lever-style machines that are reliable, even in large turnout and inclement weather.”

Given what’s at stake in this year’s midterm elections — an anxious-making showdown of a nation bitterly divided, where voters decide whether Republicans hold onto their majorities in the House and Senate, while grappling over questions of whether Trump supporters will once again come out in force at the polls or be vanquished by a “blue wave” — Spivack senses that compulsion isn’t hers alone.

“I think people were very eager to vote,” she said. “I’ve never seen such a turnout for a midterm election. It should have been made as easy as possible for them to cast their ballots.”