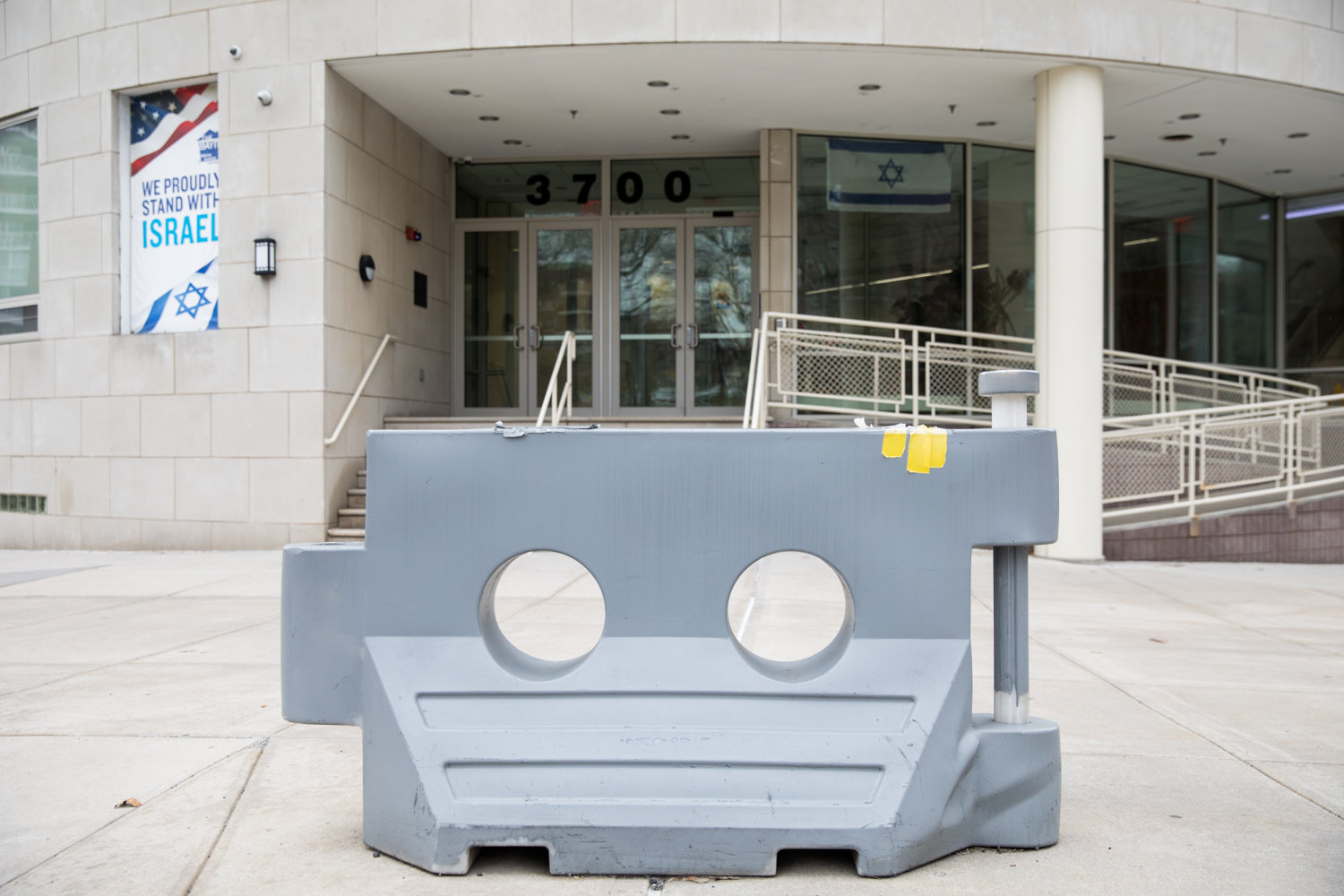 The Hebrew Institute of Riverdale has water-filled barriers in front of its entrance on the corner of Netherland Avenue and Henry Hudson Parkway East, but synagogue officials want to replace them with 25 steel protective.bollards, designed to prevent vehicles from hitting anyone on that part of the sidewalk.
JULIUS CONSTANTINE MOTAL 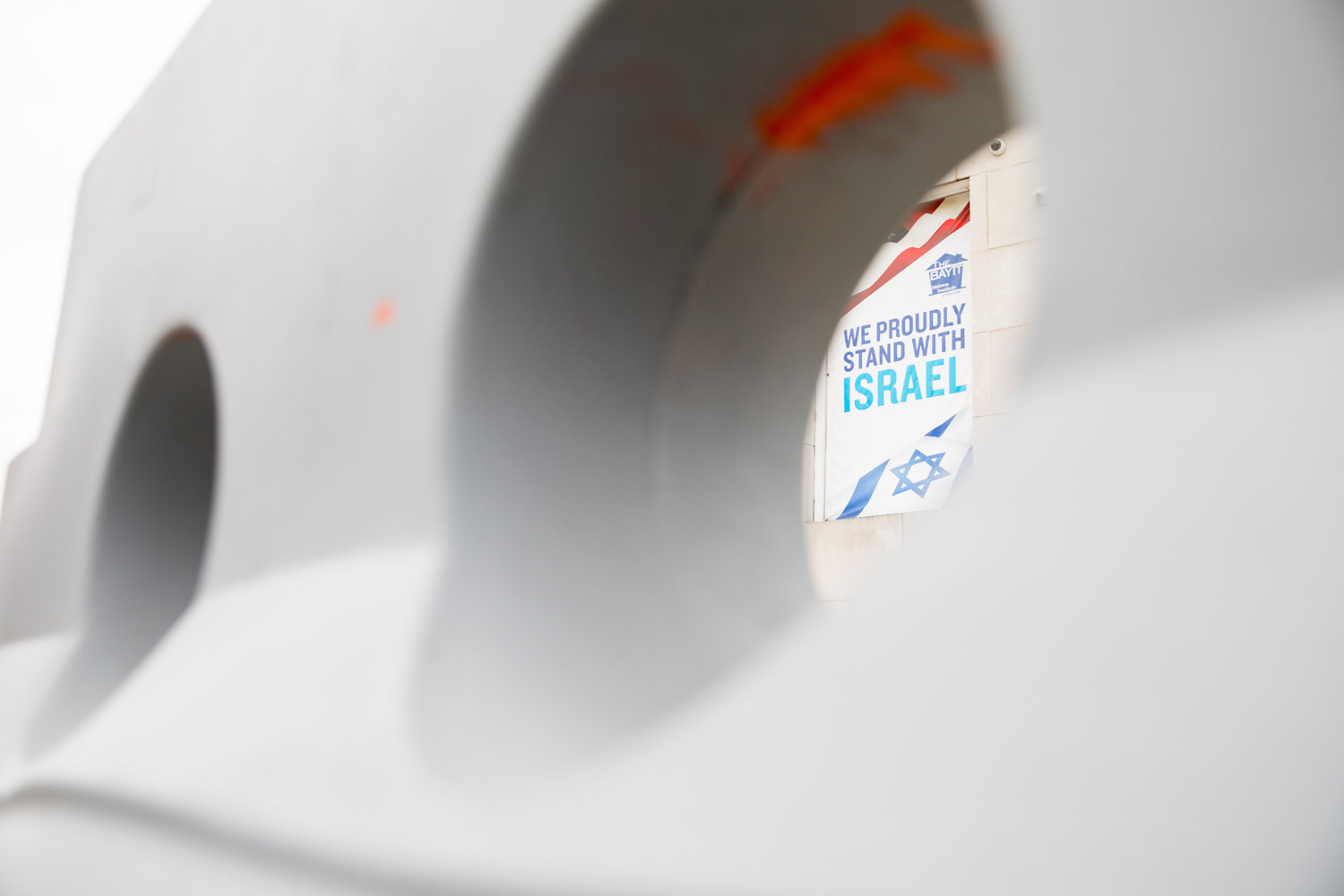 The Hebrew Institute of Riverdale wants to install 25 steel protective.bollards, designed to prevent vehicles from hitting anyone on that part of the sidewalk.
JULIUS CONSTANTINE MOTAL 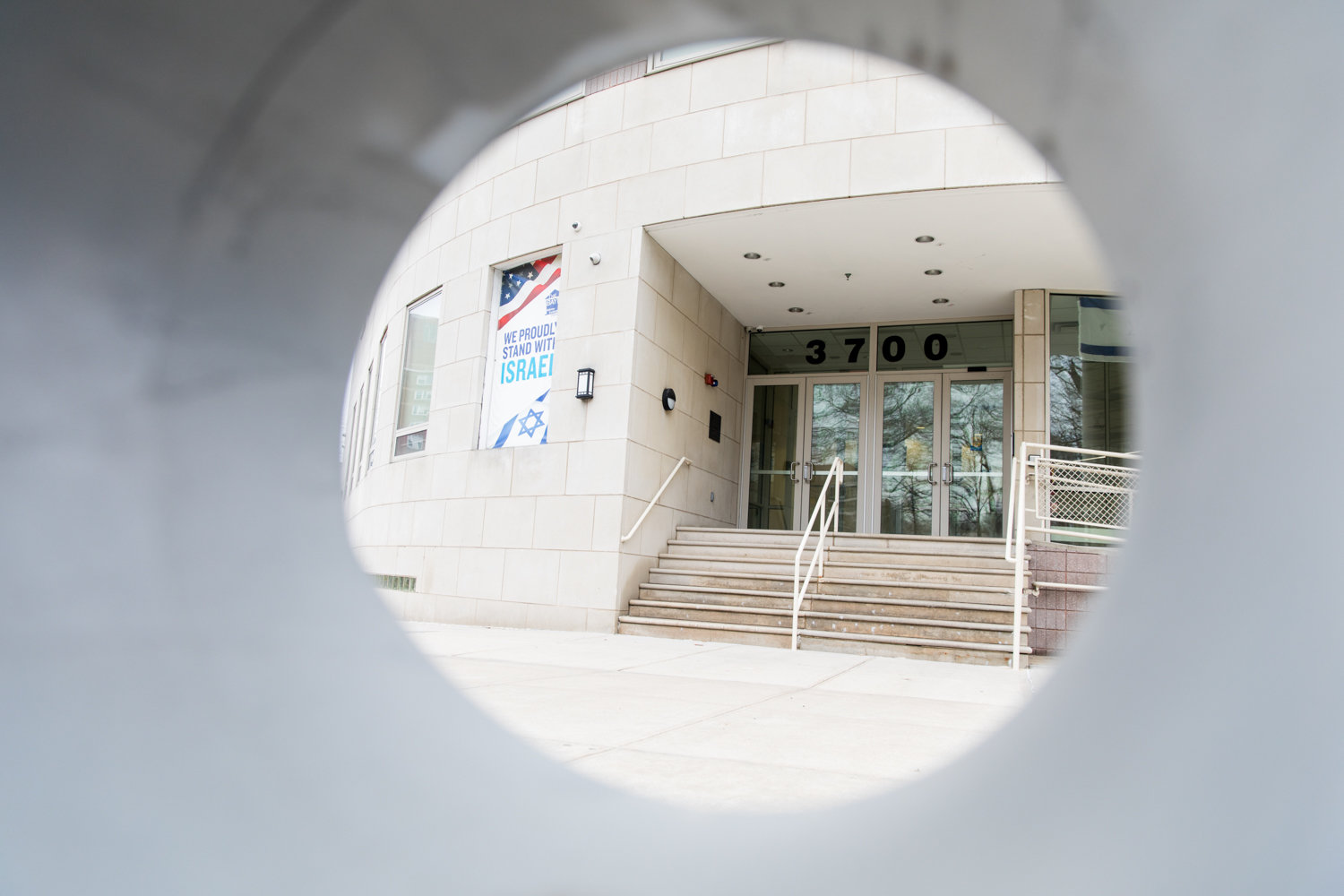 The entrance to the Hebrew Institute of Riverdale is seen through a barrier. The synagogue wants to install 25 steel protective bollards around its entrance.
JULIUS CONSTANTINE MOTAL 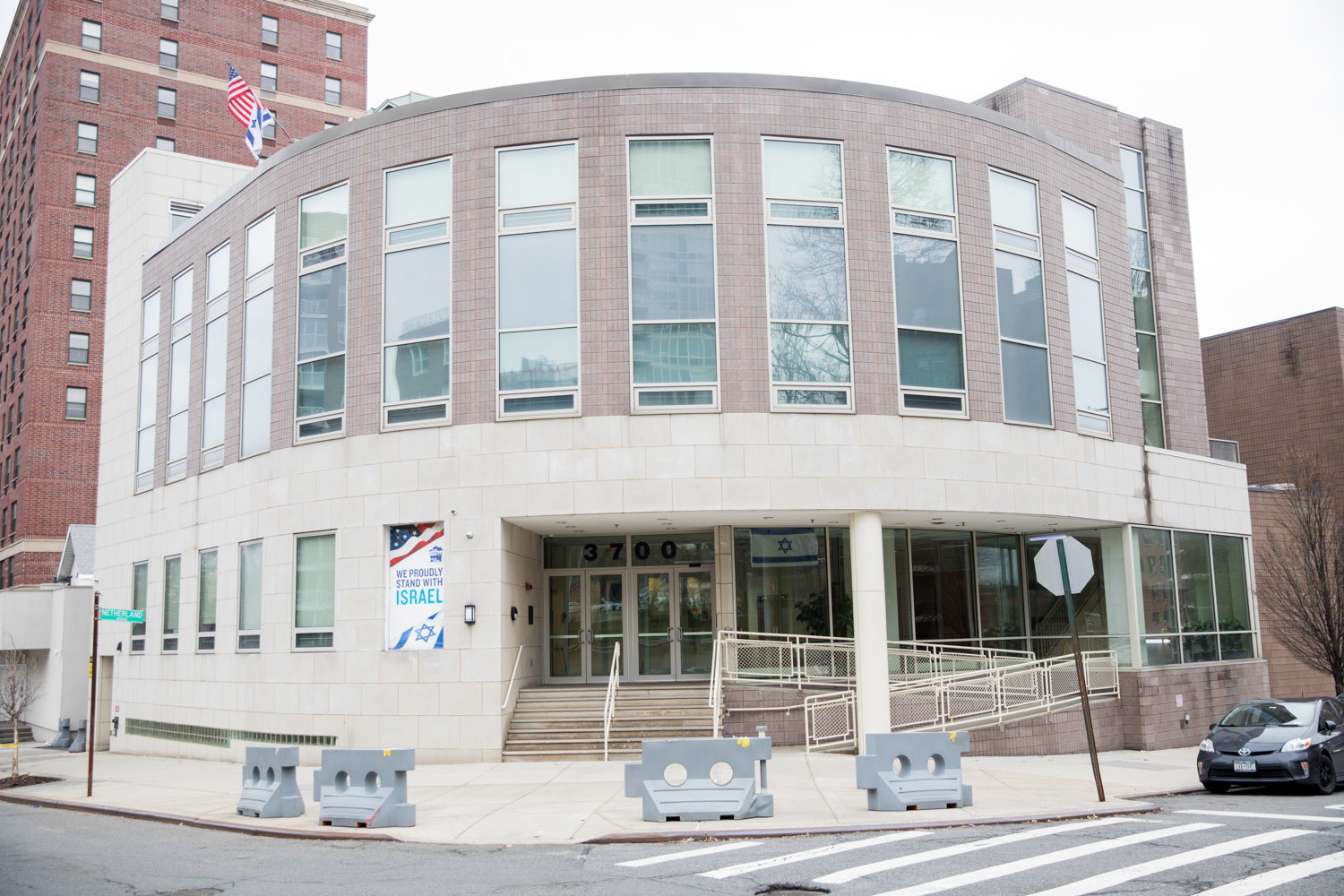 Four water-filled barriers stand outside the entrance to the Hebrew Institute of Riverdale, which wants to install 25 steel protective bollards there.
JULIUS CONSTANTINE MOTAL
Previous Next
By MICHAEL HINMAN

No groups are congregating outside the Henry Hudson Parkway synagogue for The Bayit right now, but once the coronavirus crisis passes, Hebrew Institute of Riverdale leaders want to be ready to keep those people safe.

Architect Robert Santoriello told the traffic and transportation committee that erecting 25 steel posts — more formally known as “bollards” — could stop or slow any vehicle that somehow finds itself on the sidewalk.

Whether it’s by accident, or on purpose.

“There’s no replacement for real protection,” Santoriello told the committee in what was likely Community Board 8’s first-ever online video conference of a committee meeting.

“You can see ... how much space we have in front of our entrance there. It’s a place where people like to hang out, certainly before and after services, and even during services.”

Better shielding the open sidewalk from vehicles that make regular use of the motorway service road has been something Bayit leaders have wanted to do for some time, according to synagogue executive director Richard Langer. It became even more of a priority in the last few years, where some terror attacks have come in the form of vehicles plowing through crowds of pedestrians on sidewalks.

Although officials didn’t call it an act of terror, Richard Rojas allegedly drove his Honda Accord through a crowd at Times Square in May 2017, killing one person and injuring 20 others.

Rojas was later charged in the incident, and has since said he will seek an insanity defense.

The last thing Langer said he wants is to see is a repeat of such an incident, but in Riverdale.

“This is a very sunny corner, and we have seniors who like to take advantage of it,” Langer said. “They are sitting in wheelchairs, or those fold-down walkers. And not just on Saturday mornings, but every day of the week.”

If a vehicle were to crash onto the sidewalk, none of them would have a chance to get out of the way, Langer added.

“Several years ago, we began thinking of this idea of protecting this plaza, especially since you started seeing car rammings being used as tools by terrorists.”

For now, The Bayit has installed a number of plastic water-filled barriers that could impede a vehicle that left the nearby roadway, but wouldn’t necessarily stop them, Santoriello said.

Each bollard would be 10 inches in diameter, 3 feet high, and separated four feet apart.

Traffic and transportation committee member Tao Moran, however, worried that while such spacing might stop a larger car or truck, it wouldn’t prevent smaller vehicles like motorcycles and even super-compact cars like the Smart car from sneaking through if properly aimed.

“That four-foot distance is pretty wide, especially if you have children running between them,” Moran said.

Such a barrier would be ineffective in keeping people in, but it should keep most vehicles out, Santoriello said, while still ensuring others can access the public sidewalk, even if they’re not visiting the synagogue.

“We strive to keep them as far apart as possible,” Santoriello said about the bollards. “The less of them is better in terms of appearance, and pricing. But their only purpose is to keep cars away.”

Spacing also has to be wide enough to allow pedestrians through, Langer added, especially those in wheelchairs or who are pushing strollers and the like.

Having a car end up on the sidewalk in front of The Bayit is not as far-fetched as some might think.

“There’s a lot of fast traffic moving north there,” he said. “And his plaza is often crowded with congregants from our synagogue.

“We did have an incident a few years ago where a car lost control. And if you stand in the plaza looking south toward the highway, there are no guard rails or a barrier on the Henry Hudson Parkway.”

The committee gave its preliminary approval of the bollards, with a second vote now set for the larger community board.

Ultimately, the decision to allow the construction falls on the city’s transportation department, Nivardo Lopez, DOT’s Bronx borough commissioner, told the committee his team is reviewing the application, and working with the Hebrew Institute to work out any outstanding issues.