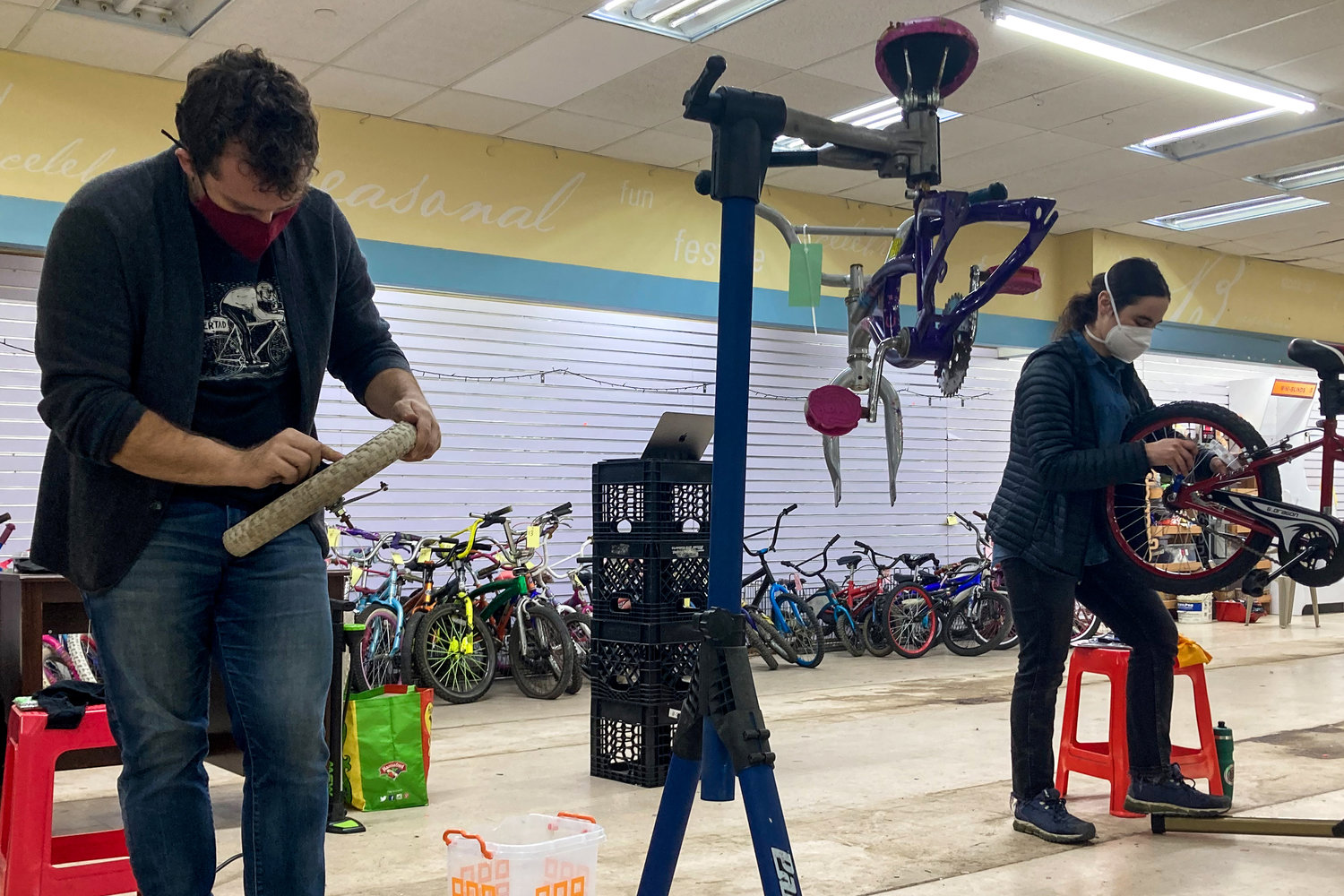 Isaac Rose and Em Hirsch have been volunteering their time to help repair several bikes that were found in an abandoned cycling shop in Manhattan.
Sachi McClendon 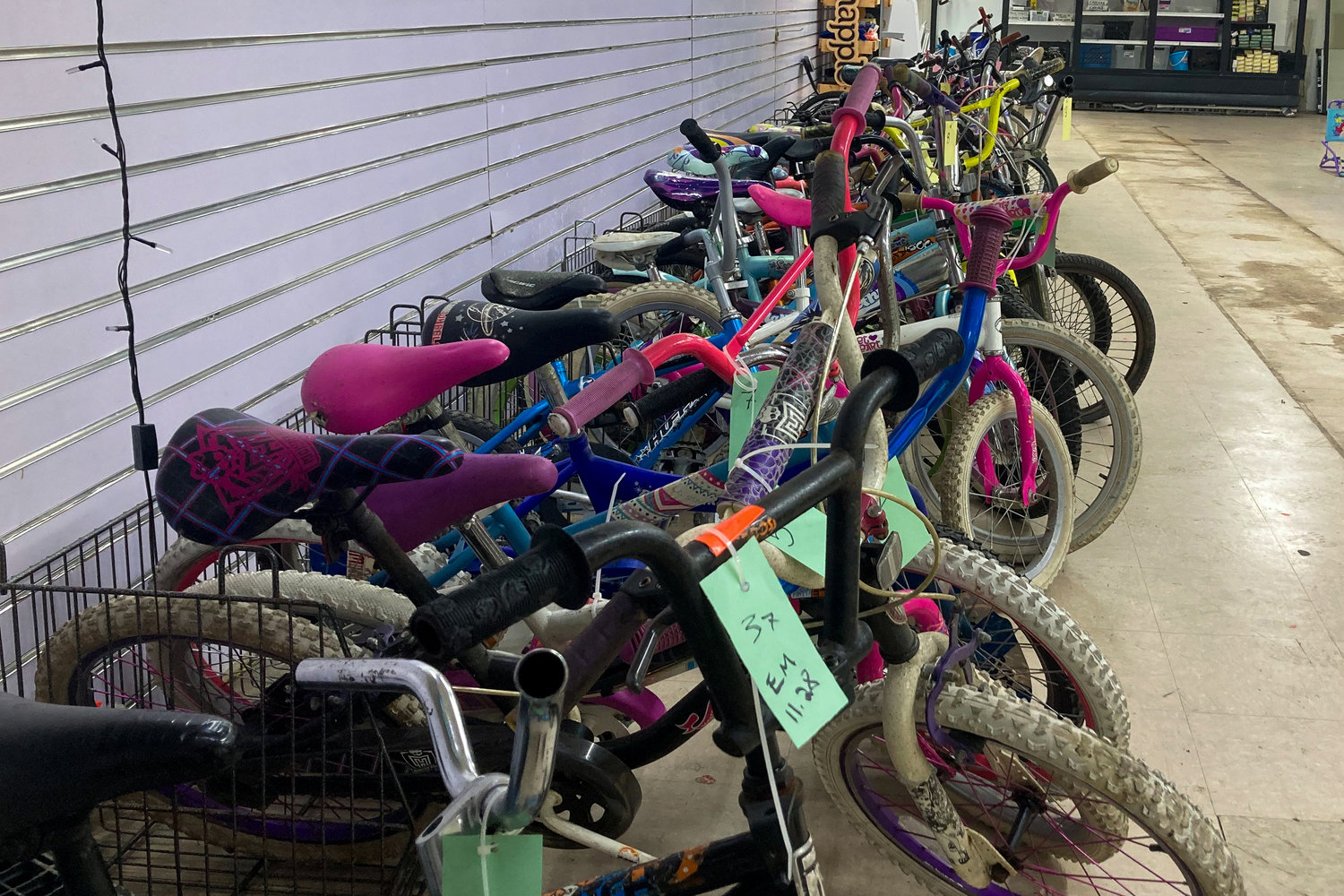 Some of the bikes that are being refurbished in the lead up to Three Kings Day.
Sachi McClendon
Previous Next

I put out a call for help, and a bunch of cyclists from all over New York showed up.”
JESSICA WOOLFORD, Kingsbridge Unidos founder
By Sachi McClendon

Over the past few months, Jessica Altagracia Woolford has been organizing a community bike-repair project.

The goal in the short term is to give away newly refurbished bikes to kids in the Kingsbridge area on Three Kings Day on Jan. 6. The long-term goal, while ambitious, is to form a bike cooperative and community center in the northwest Bronx — a car-centric area of town where bicycle repair shops are few and far between.

The idea behind the project was unexpected, to say the least. A few months ago, a longtime friend and organizer hit up Woolford to say that he came across a collection of rundown bikes while gutting an abandoned cycling shop in Spanish Harlem for his job. He wanted to know if she could figure out a way to give the bikes away to kids in the community.

For Woolford, such a project is something she is used to. She began the mutual-aid group Kingsbridge Unidos. She used that community experience and spirit in an unsuccessful Assembly run against Jeffrey Dinowitz earlier this year.

“We checked it out. It was like frozen in time. Somebody had closed the door one day and just didn’t come back,” Woolford said, referring to the abandoned cycling shop. There were hundreds of bikes and bike parts scattered throughout the store, from vintage road bikes and cruisers to handlebars and pedals.

“I put out a call for help and a bunch of cyclists from all over New York pulled up. And over the course of 72 hours, we pulled out like 75 bikes that we thought looked pretty good and repairable. Mostly kids’ bikes,” she said.

The next problem was finding a place to work on the bikes, and Woolford wanted it to be near Kingsbridge where she grew up. After much searching, she was able to secure a large retail space on Broadway and 225th Street through the help of state Sen. Gustavo Rivera’s office. The vacant storefront, which used to house Broadway Deals, is owned by a company that is letting Woolford use the space for the time being.

Right away, Woolford and other volunteers started turning the empty store into a repair shop. They separated the kid and adult bikes. They organized all of the leftover bike parts left behind the old shop: tubes, tires, handlebars, calipers, bolts and more.

And by last Tuesday, three mechanics were already underway tightening bolts, fixing tires and cleaning the frames of the first set of bikes.

All of the mechanics are volunteers who have varying degrees of experience in bike repair. The one thing that binds them all is a past in community organizing. One volunteer, Em Hirsch, grew up in Inwood and now works at the Broadway Bicycle School — a worker-owned cooperative in Cambridge, Massachusetts.

“I grew up down here, and have been involved in community organizing, and I’ve always really liked doing mechanic stuff,” she told The Riverdale Press, while working on a kids’ red and black bike.

“There’s sometimes so much you can learn in a day.”

Woolford is hoping to find more volunteers to come help out, even those with little to no experience with repairing bikes. As — in Woolford’s eyes — more than just giving bikes away to kids in Kingsbridge, the project is about providing a space to teach those in the community a skill.

In fact, two of the three mechanics last Tuesday were self-described amateurs,” said Jacob Udell. “I’m like a home hobbyist kind of mechanic, so (I’m) definitely learning things.  But that’s part of the fun.”

Another volunteer, Isaac Rose, said he had “minimum” experience as well, despite having a hand in a “bunch of community bike projects over the years.”

Woolford hopes that this bike redistribution effort serves as a test run, or prototype, for a future sustainable bike co-op in the area. “This is just kind of like a first pass at something bigger,” she said. “A space not only for kids to come and kind of tinker around, but there could be apprenticeships for teens in the community.”

And beyond workforce development, the co-op could serve as a hub for deliveristas or delivery workers. “Just like a space for the delivery workers in the community to charge their bike, use the bathroom, and just stop for a minute,” she said.

Woolford does acknowledge that she’s more than just a hop skip and jump away from that becoming a reality. Beyond just community buy-in, there’s also the matter of funding.

“I’m talking to a lot of different types of people who are helping me think through the question of what does it mean to be financially stable and to really thrive as a business,” she said. “I don’t want this to be my thing. I want it to be a real community vehicle. A space that can live on that has a solid lease for decades. All of those things don’t make it vulnerable to whatever political inclinations people might have.”