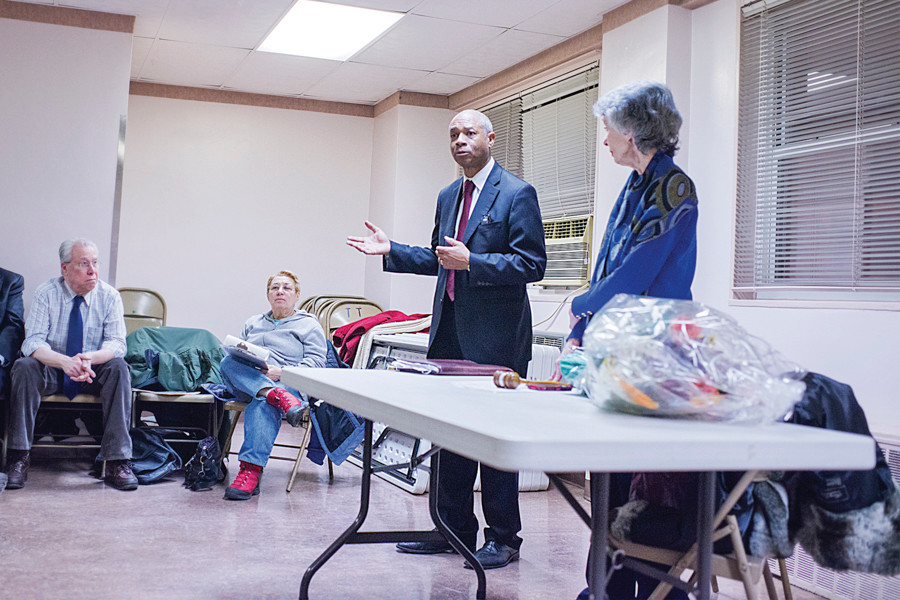 Bronx District Attorney Robert Johnson, who is running unopposed in an upcoming election, gives a speech to the Ben Franklin Club on Jan. 28.
Adrian Fussell/ The Riverdale Press
By Shant Shahrigian

Recent years have seen the Bronx’s criminal justice system come under scathing criticism for long delays in cases and a relatively low rate of convictions for juried trials. But District Attorney Robert Johnson is on his way to an easy re-election this fall.

Petitions filed with the NYC Board of Elections last week show no one is challenging Mr. Johnson, who has served as DA since 1989.

In the absence of any opposition, he is not running a campaign beyond his usual appearances before community boards and at other local forums. But in a recent phone interview, Mr. Johnson, 67, boasted of a steep decline in crime on his watch and attributed problems with the criminal justice system here to a perennial lack of resources at courts.

“One of the highlights, if not the major highlight, is the reduction in crime the last 20 years... Certainly, I’ve heard from [Bronxites] a great deal, in at least part of your coverage area, about auto crime,” Mr. Johnson said, pointing to a drop in grand larceny auto incidents to less than 1,500 last year. The DA said in 1990, there were about 23,000 incidents. In keeping with citywide trends, violent crimes in the borough dropped from 48,000 to fewer than 13,000 during the same period.

Numerous news reports have cast the Bronx criminal justice system in a negative light, with The New York Post finding in 2012 that the felony conviction rate here was 42.8 percent, compared to an average rate of 53.7 percent in other boroughs.

Mr. Johnson said convictions are hindered in part because cases take a long time to wind through the system and his office loses witnesses in the process. He blamed the long wait times on a lack of judges and other resources.

“The resources have never been there sufficiently enough to say we can make a standing goal” for how long a trial should take,” Mr. Johnson said.

In 2013, The New York Times found there were more people waiting in jail for trials in the Bronx than in all the other boroughs put together.