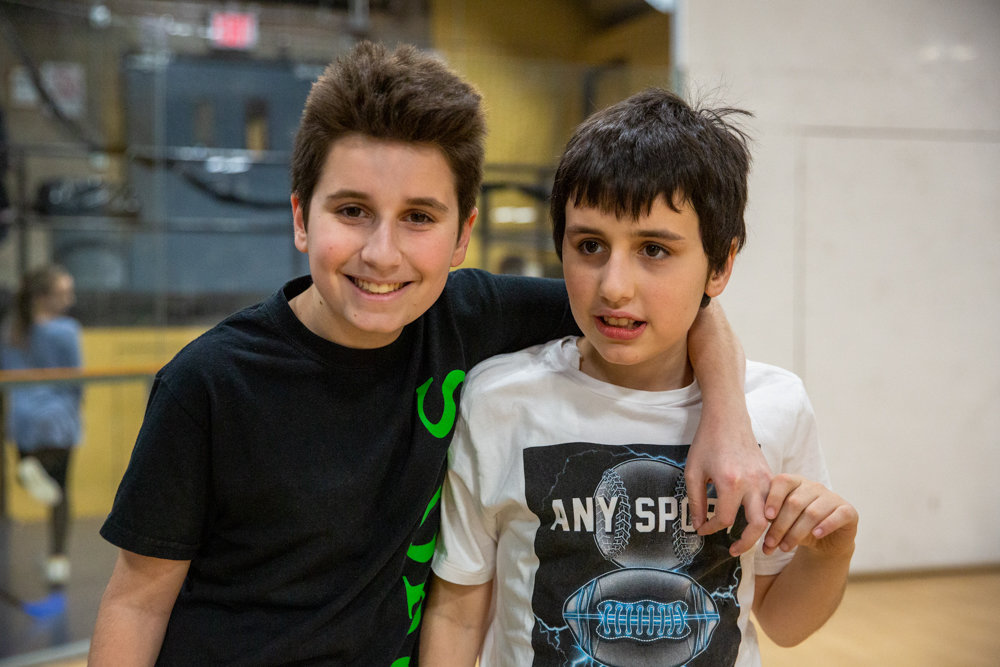 David Shapiro, left, here with his younger autistic brother Efraim, is the mastermind behind Inclusion Basketball, a program designed to benefit children with disabilities.
EIAN KANTOR 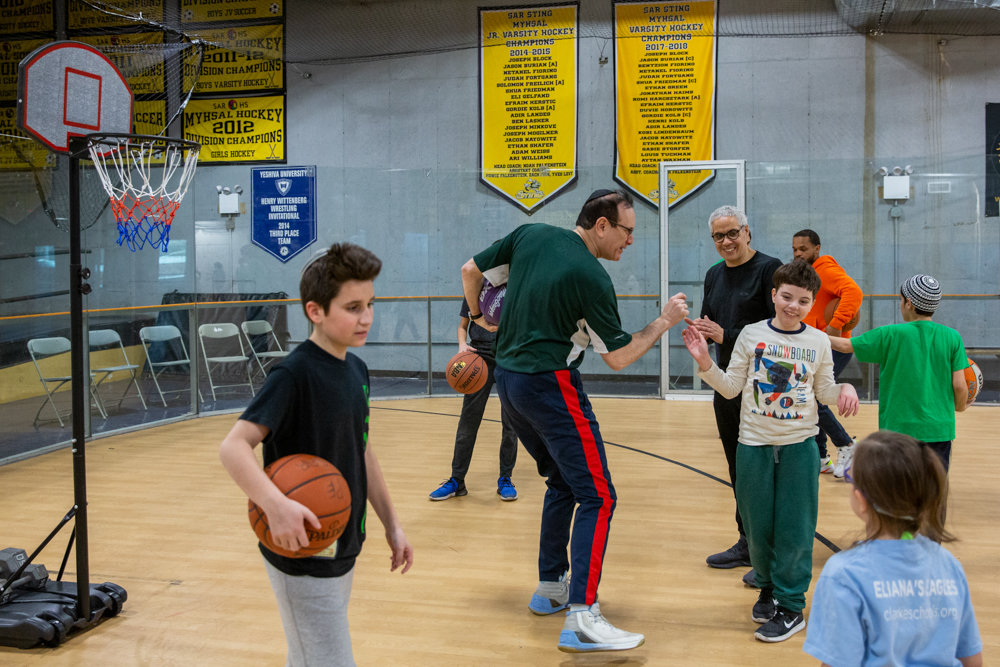 David Shapiro, holding a basketball at left, and volunteer Harold Brem, center, are part of a unique program called Inclusion Basketball, which benefits children with disabilities.
EIAN KANTOR
Previous Next
By SEAN BRENNAN

At first glance, the group of children gathered inside SAR High School last Sunday looked like your average group of kids working on their basketball game.

There were coaches helping players with the finer points of shooting and dribbling, and there were lots of smiles and high-fives all around.

But this isn’t just any typical team. Instead, it’s a project called Inclusion Basketball, and it’s the brainchild of 13-year-old David Shapiro.

Shapiro’s younger brother, Efraim, is autistic, so as part of his bar mitzvah project last year, David decided to put together a program in which children with various disabilities can come together and not only learn about a game they never played before, but also get some much-needed social interaction with their peers.

The program, which caters to children dealing with autism, cerebral palsy and genetic syndromes, launched about a year ago and has flourished since its inception.

“My brother has disabilities and he doesn’t have a lot of friends, so I wanted to do this for him,” Shapiro said. “I like sports and I thought basketball was the safest sport to play with these kids.”

David has seen a major change in his brother since the program started.

“He’s more comfortable around people,” Shapiro said. “He doesn’t cover his ears as much, and he likes being around the other kids. In the beginning he was a lot more impatient. Now he knows more to interact with people.”

Gemma White is a licensed speech and language pathologist who has volunteered her time since the very first session was held. When she heard about the program, she knew she needed to be part of it.

“I just decided I’d help from the get-go,” said White, a mother of five whose two oldest sons are volunteers. “Because it’s all well and good that you say you want to run a program for kids with special needs. But it takes skills to actually implement it properly.”

White works with coaches on how to differentiate skills for different people and how to pair people up and break down the exercises, because “every child is different.”

The progress the children have made in the program, she added, has been inspiring.

“There were children who, in the first session, wouldn’t come into the gym,” White said. “But by the third session, they’re playing with one of their peers. All of the children have made wonderful progress, and it’s also life skills for the volunteers. I very much believe that they all get something out of it.”

Two of those volunteers are the father-son tandem of Harold and Zach Brem. Harold is a coach/motivator/cheerleader for the kids while Zach, because he is in the same age group as the kids in the program, does a little more one-on-one interaction.

“The one thing they enjoy a lot is playing basketball,” Zach said. “When they first got here, they really didn’t understand it that much. So I taught it to them, and now they understand it and they enjoy it a lot. They have fun playing and learning new things every time they come here.”

The transformation of the kids during their time in the program has seen both participants and volunteers grow closer.

“In the beginning they wouldn’t engage, there wasn’t a smile on their face, they weren’t happy and they weren’t very friendly at all,” Harold Brem said. “But now we’re really bonding because we became friends.”

Harold Brem is a doctor who also donates his time to the program. He’s seen first-hand what this program brings out in the children.

“It’s extraordinary that these children believe they can learn this,” Harold Brem said. “They are excelling at a level that no child usually does. They went from not being able to dribble or pass to actually making five out of six shots. They’ve been able to excel and they’ve taught us adults that you never, ever say that you have a disability. Only adults talk like that. All of these kids are just as happy as any other child.”

Josh Viven coaches at The Riverdale Y and says it was through basketball he met David Shapiro’s mother, Sofia, and learned about the inclusion program.

“For me it was a great opportunity because I love to work with kids,” Viven said. “We started as a team and now we’re like a family. I think with support you can do pretty much anything.”

A program that started with just three or four kids has now grown to 20, and David Shapiro sees it only expanding more in the future.

“I’d like to expand it to more than just Riverdale,” Shapiro said. “But besides that, it’s going great. I’m enjoying it.”