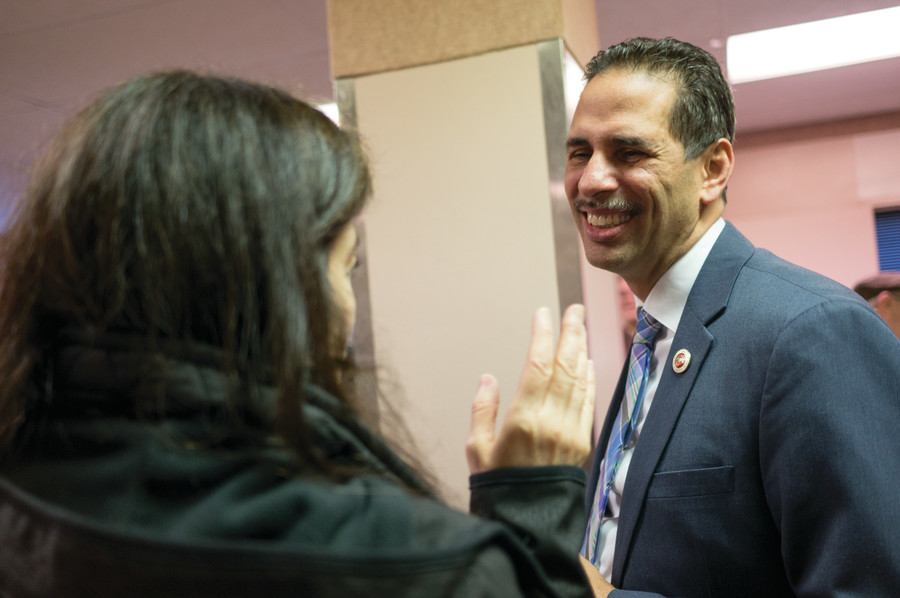 Fernando Cabrera talks with a member of the Ben Franklin Reform Democratic Club where he secured his Democratic primary endorsement for city council.
Julius Constantine Motal
By Anthony Capote

The Democratic race for the 14th council seat has officially begun in the northwest Bronx, where incumbent Fernando Cabrera already has gained an important lead.

The Ben Franklin Club is one of the most influential political clubs in the Bronx, especially in citywide races like in the 14th district, where the endorsed candidate has won in the last two elections.

Cabrera appealed to the club on his experience, even calling up the 2010 race for the seat in which Ben Franklin Club members voted to endorse him ahead of Maria Baez, the incumbent. Baez, at the time, was widely criticized in the press and by other elected officials for holding the worst attendance record in City Council, once missing 24 straight Council meeting in 2008.

But times have changed for Cabrera. He no longer is a young, upstart politician bent on reforming his district. Instead, he’s an incumbent with two terms under his belt, facing two challengers in Sanchez and Abreu who seek to reach younger, more socially liberal voters.

Although it seemed the meeting’s theme and vote centered more on Cabrera’s experience, than his actual policy points as three club members who spoke on Cabrera’s behalf noted that there were a few issues, on which they did not agree with the councilman.

Daniel Padernacht, a Ben Franklin club member who’s also chair of Community Board 8, punctuated that point when he spoke on Cabrera’s behalf before votes were cast.

“I have had the opportunity to work with Cabrera,” he said. “I might not agree with all of his personal views, I think almost everyone in this room can agree. But he has been in the community and he has helped us out.”

Those views centered largely on Cabrera’s past comments on members of the LGBTQ community. Cabrera, a pastor at New Life Outreach International in Bedford Park, has faced criticism since a video surfaced in 2014 in which he apparently praises repressive laws in Uganda that imprison people for homosexuality.

When asked about this by a Ben Franklin Club member, Cabrera simply said his own opinions don’t affect the legality of same-sex marriage.

“Every vote that we have had (in the council) regarding the LGBT community, I have voted yes,” Cabrera said. “I have my own personal views, which ironically are the same views Barack Obama had when he first ran. I respect the law of the land.”

The topic came up again when Sanchez, an openly gay candidate, was asked the same question. He pounced on the opportunity to criticize his incumbent opponent.

“In 2014 Cabrera said, without any provocation, that he supports a law that would put me in jail simply because of who I love,” Sanchez said. “Our current leadership hasn’t reflected our values.”

While Cabrera has attracted one segment of the Democratic party, both Sanchez and Abreu have channeled a much different group — the growing number of young Democrats that supported candidates like U.S. Sen. Bernie Sanders in last year’s Democratic presidential primary.

Abreu, a Sanders delegate at the Democratic National Convention and an energy advisor to the Obama administration, received praise from more than a few club members for his innovative ideas.

“I really had no intention of speaking tonight,” club member Helen Morik said. “I thought Randy was the only one that was positive, and I think he has a future. And I told him that. I said, ‘Come back in four years when Cabrera can no longer run, and I will happily endorse you.’”

Still, a long road lies ahead of Cabrera and his challengers before the Democratic primary in September. Cabrera’s experience may not fair as well in other parts of the 14th council district, however, where both Sanchez and Abreu grew up and spent most of their time.

Correction: Randy Abreu and Justin Sanchez each received seven votes in their search for an endorsement from the Benjamin Franklin Reform Democratic Club. A story in the April 20 edition stated otherwise.