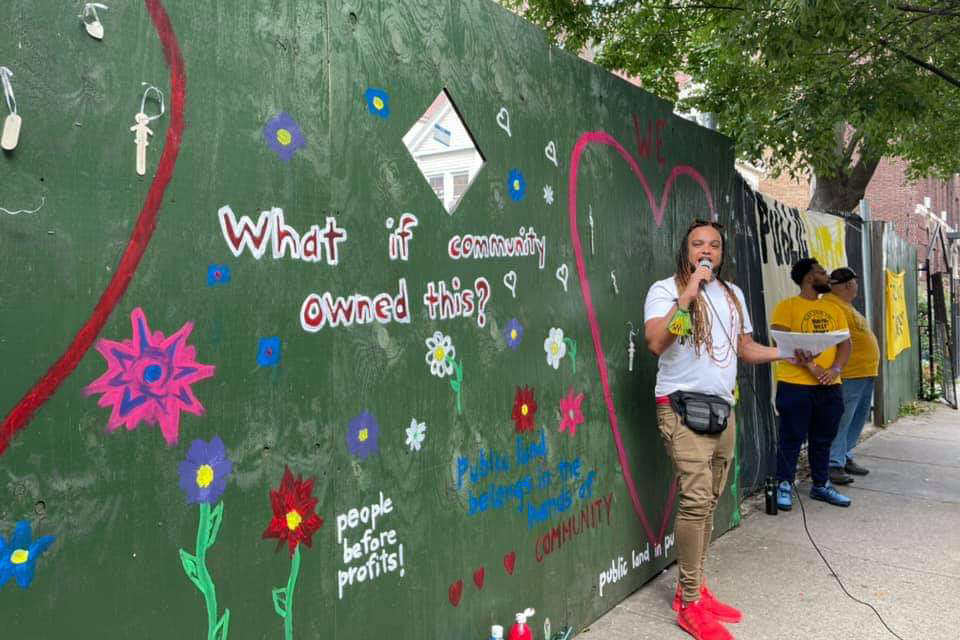 Members of the Northwest Bronx Community and Clergy Coalition gather to call on city officials to turn over ownership of 2275 Loring Place in University Heights to the community. Advocates say these properties often go to developers who don’t include communities with their plans.
Courtesy of Northwest Bronx Community and Clergy Association
Support journalism

Edward Garcia wants to see a change in the Bronx. As the community development director of the Northwest Bronx Community and Clergy Coalition, he is heavily focused on housing issues in the borough.

“We want to make sure we advance development in our communities without displacing families,” he said.

If the clergy coalition had its way, publicly owned lands would be turned over to neighborhoods for what they are calling shared governance and collective ownership.

Last month, the coalition rallied in front of 2275 Loring Place in University Heights, calling on city officials to turn the property over to the community before it ends up in the hands of a private developer.

“This is part of an organized campaign to claim public land for community land trusts across the borough,” Garcia said. “We have identified a total of 31 properties in the northwest Bronx area to claim for community ownership. They are all city owned, so this action is part of a series of events we’ve been holding in trying to demand the city turn over vacant property to the communities they’re in.”

The clergy coalition first began holding the rallies at vacant lots back in August, and have since turned it into a continuous event.

The rallys’ intention has been to direct focus to different vacant lots in various parts of the Bronx — lots which Garcia believes could be better maintained by the neighborhoods around them, then controlled by a city who might not even remember the property exists.

“Historically (the city) has been transferring these properties to developers who have no interest in including communities in the development process,” Garcia said.

While the clergy coalition demands the city fully transfer the properties over to community land trusts, Garcia says the organization would be willing to compromise as well.

One solution they’d find feasible, for example, is establishing a partnership of sorts with a private developer, but under the terms the organization sets. The terms would be largely on the condition that they and the developer both share a vision the organization believes aligns with the community.

For now, the clergy coalition has its eyes set on acquiring Loring Place.

“If there has been any actual commitment … all we ask is that it is interrupted to just ensure that we are the ones who” take ownership of it, Garcia said. “We want the city to stop the engagement with that developer and just transition it to the community instead.”

The plan, Garcia said, is to partner with the Bronx Community Land Trust, which was created last year to “build and preserve safe, healthy and deeply affordable housing” in the borough. The clergy coalition and the land trust would then do just that not only on Loring, but on any vacant land the city would otherwise hand over to a developer.

The clergy coalition, Garcia said, “would utilize its organizing and community development history to leverage all of that expertise and support the CLT in developing the site. Of course, we would go through the housing and preservation department, which is what a developer does. A developer would often just use the city’s money to develop that affordable housing development, and cashes out in the development fee.”

The approach would be no different than how a private developer acquires such a property Garcia said, except the organization would allow far more transparency and would be sure to get the community involved with the developmental process.

Founded in 1974, the clergy coalition is made up of several committees tackling issues ranging from community development to climate change. One of the biggest committees is focused on housing.

“We’ve been very present in the Bronx in organizing tenant associations and helping them win specific changes to their buildings,” Garcia said. “But we have also done a lot of new coalition work that has led to a lot of concrete legislative wins.”

The advocacy group played a major role in passing state legislation two years ago that ended the vacancy bonus provision, which allowed landlords to legally increase rent by 20 percent on new leases for rent-stabilized apartments.

The removal of the provision helped reform the housing landscape in the city, Garcia said. It no longer incentivized landlords to displace longtime residents just to raise the rent.

The organization also has been influential in helping to expand the “right to counsel” passed at the city level last spring.

More recently, the clergy coalition focused its resources fighting to expand the eviction moratorium while canceling rents for tenants impacted by the coronavirus pandemic. They also have begun helping tenants who owe their landlords money because of COVID-19 to apply for the state’s Emergency Rental Assistance Program.

Looking forward, Garcia said he wants to create more awareness to a new campaign by the group: ending tax lien sales. These sales are intended to help the city recoup some of its missing property taxes by repossessing the property the taxes are owed, and then using the proceeds of the sale to pay off the arrears.

More often than not, Garcia said, the city sells the debt to private investors, which tend to add additional fees and interest to the overall debt.

The process is said to cause a homeowners’ tax debt to increase two-fold in a short period of time.

“The reason I think it’s important is because this is how a lot of Black and brown people who own property are pressured to get rid of them to the current systems we have in place,” Garcia said.

“It encourages predatory targeting of people in these communities.”