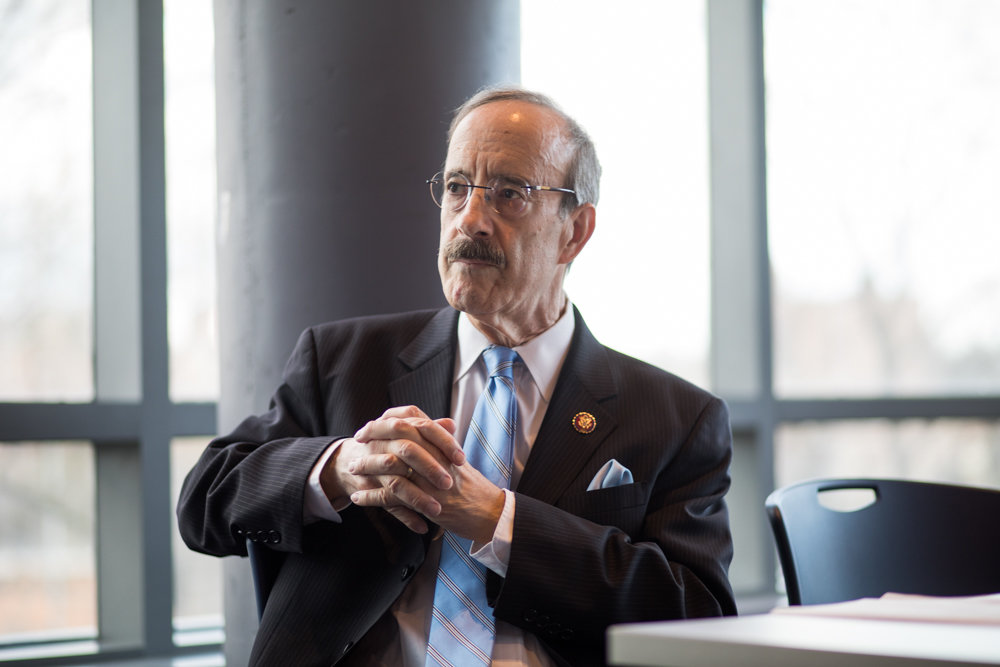 U.S. Rep. Eliot Engel listens as he is introduced by Manhattan College students. Engel visited the school to talk about this migration crisis and his recent trips to the U.S.-Mexico border and several countries in Central America.
JULIUS CONSTANTINE MOTAL 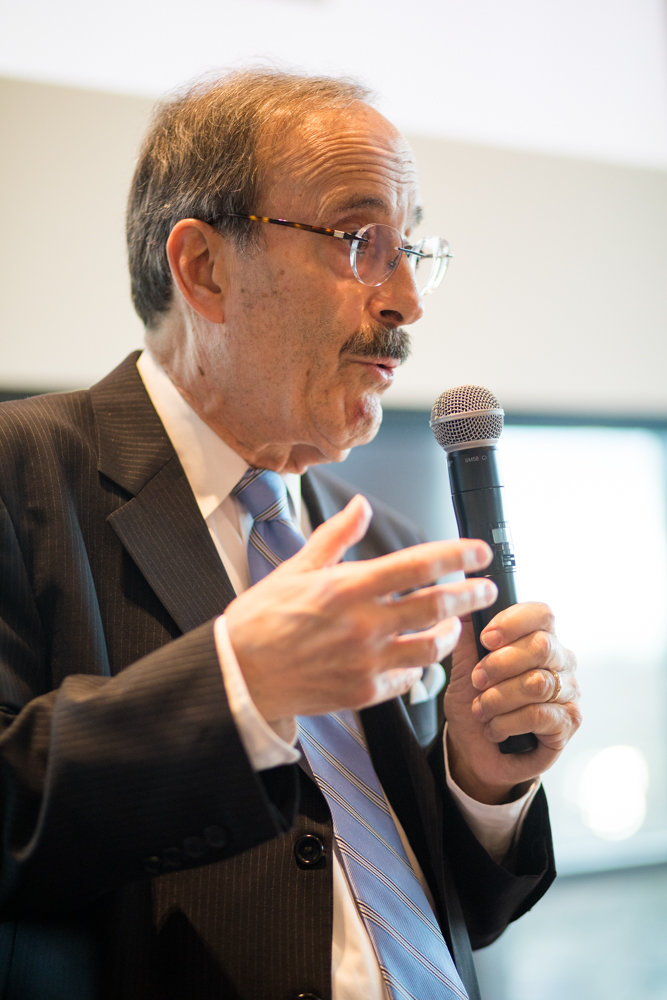 U.S. Rep. Eliot Engel responds to a question from an audience member at Manhattan College following his presentation on the migration crisis and the insights he cleaned from his trips to the U.S.-Mexico border and several countries in South America. Engel got into a war of words with Rabea Ali, a Manhattan College junior, over his comments about U.S. Rep. Ilhan Omar and his views on the Israeli-Palestinian conflict.
JULIUS CONSTANTINE MOTAL 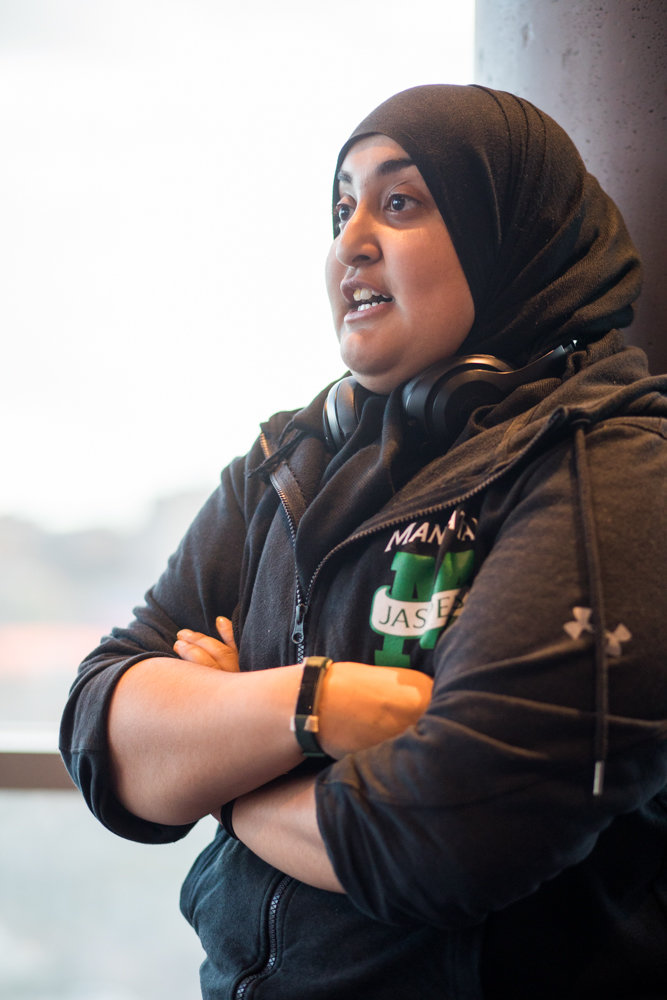 During a question-and-answer session with U.S. Rep. Eliot Engel, Manhattan College junior Rabea Ali saw an opportunity. Without a microphone, Ali asked Engel about his statements on the Israeli-Palestinian conflict, and challenged him on his comments about U.S. Rep. Ilhan Omar that she described as Islamophobic. Engel visited the school to talk about the migration crisis.
JULIUS CONSTANTINE MOTAL 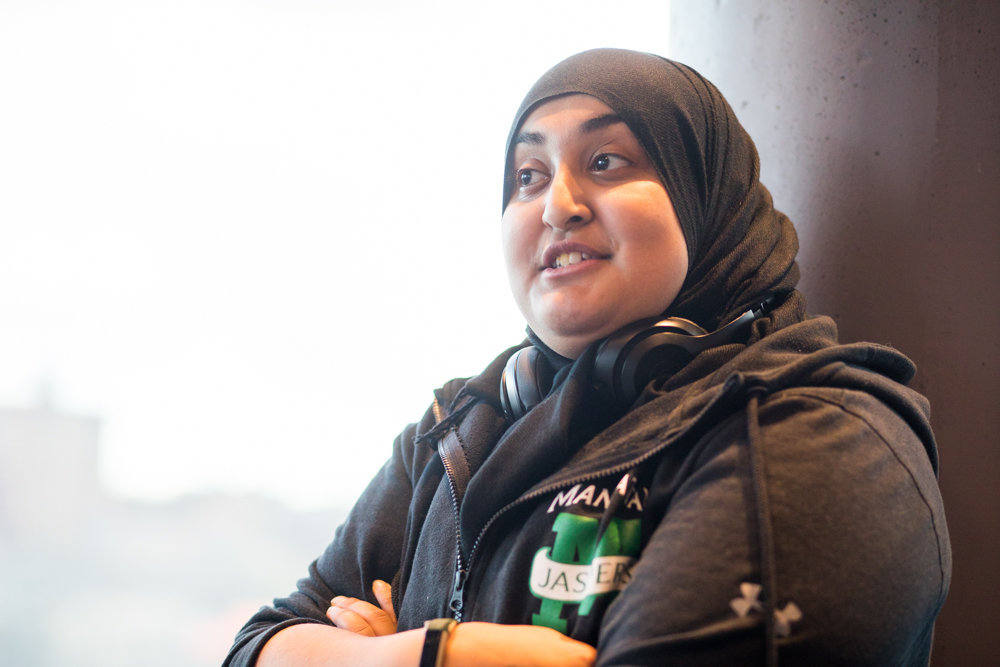 Manhattan College junior Rabea Ali challenges U.S. Rep. Eliot Engel about recent comments he made concerning fellow U.S. Rep. Ilhan Omar. Engel visited Manhattan College to discuss the current migration crisis and share the insights he gleaned from his trips to the U.S.-Mexico border and several countries in South America. Ali drew a parallel between the treatment of asylum seekers in the United States with the treatment of Palestinians by the Israeli military.
JULIUS CONSTANTINE MOTAL
Previous Next
By HEATHER J. SMITH

The Manhattan College junior took time off work to attend Engel’s talk at the school about his visit to the U.S.-Mexican border, where he shared his observations about overcrowded conditions faced by refugees.

But Ali had thoughts about refugees from other parts of the world, like Palestinians inside Israeli occupied territories. She wanted to know if Engel planned to visit those refugees, creating a tense exchange that didn’t seem to end well.

In fact, it ended with Engel telling Ali, “You know, you ought to be nicer, too. Put a smile on your face. It wouldn’t hurt.”

It was a strange and personal resolution to a conversation about global politics. In light of the “Me Too” movement’s conversations about casual sexism, telling Ali to smile was less an indication that Engel disagreed with her, she later told The Riverdale Press. It felt more like a patronizing dismissal because she was a woman of color and a Muslim.

“That’s where it became very clear that he did not have any respect for me and he was being sexist,” Ali said. “And I think for a sitting U.S. congressman to say something like that is horrifying.”

A man telling a woman to smile, even if he is well-intentioned, is still an expectation that a woman should behave in a way he feels is best, said Michelle Fine, professor of critical psychology and women’s studies at the City University of New York’s Graduate Center. Psychological research has generally concluded that smile requests are an expectation that women should be caring and welcoming verbally and non-verbally at all times.

Ali went to Manhattan College that evening with plans to confront the congressman. Engel has been a verbal critic of U.S. Rep. Ilhan Omar of Minnesota, one of the first two Muslim women to serve in Congress. Since taking office, Omar has publicly questioned the role of pro-Israel lobbyists in the United States, and the country’s continued support of Israel despite the Gaza blockade and the occupation of the West Bank.

Omar’s comments touched a nerve on both sides because that reasoning is said to be a common anti-Semitic talking point meant to delegitimize Israeli statehood. Though she unequivocally apologized, Engel and other high-ranking House Democrats rebuked Omar’s statements.

In March, the House passed a resolution condemning hate speech, including Islamophobia, although Engel said he was disappointed it didn’t focus on anti-Semitism exclusively. Though the resolution didn’t mention Omar by name, it came soon after her comments went public.

“Having something against the Jewish faith is anti-Semitic, but I believe being critical of the Israeli state is not anti-Semitic,” Ali said. “But I think that attacking a congresswoman or attacking anyone for their faith, if they happen to be Muslim, is Islamophobic.”

Despite his criticisms of Omar, Engel also has defended the congresswoman. He tweeted a condemnation of one of President Donald Trump’s campaign advisors who called Omar “filth.” He also rebuffed pressure to remove Omar from the House Foreign Affairs Committee, which he chairs.

He has also condemned the March mass shooting of Muslim worshipers in Christchurch, New Zealand.

“When Islamophobic rhetoric goes unchecked — or more dangerously, even embraced or normalized — in the public discourse, it’s only a matter of time before violence follows,” Engel said in a statement at the time. “There is no more horrifying combination than unchecked extremism and deadly firearms. We here in the United States know that pain all too well.”

Ali left work early to attend Engel’s talk because she felt it was a “slap in the face” that a school prided for its inclusivity would host a speaker she believes is Islamophobic.

“I genuinely wanted to know what he would say, and I genuinely appreciate the stories he told us,” she said. “I think it was worthy, and I’m glad that I was there. But I also still cannot get past his lack of accountability in his Islamophobic comments, and his lack of acknowledging his very pro-Israel stance.”

Engel’s talk focused primarily on the hunger and danger experienced by refugees of Central and South America. Afterward, he opened the floor to audience questions. When her turn came, Ali thanked Engel for his story, but asked when he would visit Palestinian refugees.

“And how do you find it in your humanity to support Israel when it is actively committing human rights violations?” Ali asked.

“Well, I don’t agree with much of what you’ve just said,” Engel said. “But I’ll tell you one thing that we both agree on —I’m for a two-state solution.”

“So what justifies your Islamophobic comments time after time?” Ali asked.

“Look up your own history sometime,” she said.

To that, Engel told her to be nicer and to smile. The response prompted mixed comments by others in attendance — some critical of Ali, and others critical of Engel.

“Everyone that I spoke to had the same remark at the end,” Ali said, “which was, ‘I can’t believe he told you to smile.’”

While Ali didn’t believe going into the event that she and Engel would reach an agreement on their ideologies, she hoped the conversation would be constructive.

“If he had said he was willing to commit to visiting Palestine or learning more about the Palestinian people and hearing their stories, that’s all I could ask for,” Ali said. “And even now after that, after him attacking me, if he sat down and was willing to have a conversation, that would be ideal, because that’s the only thing I could really ask for.”