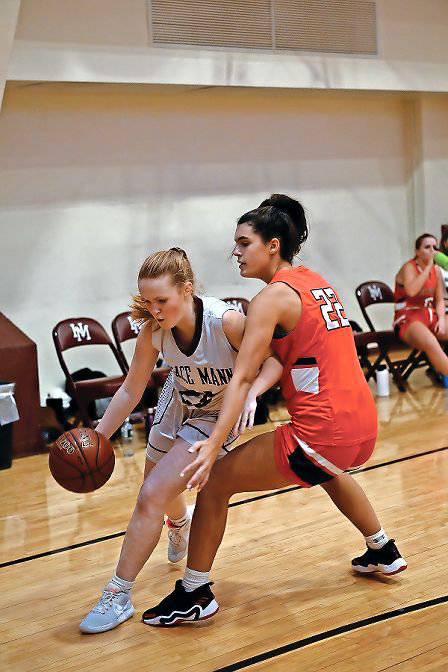 Horace Mann’s Ava Parento drives on a Fieldston player in 51-43 win for Horace Mann in the opening game of the Courts of Dreams Classic.
Courtesy of Barry Mason
By Pete Janny

Whatever they touch turns to gold. Courts of Dreams is prepared to revitalize any downtrodden court in sight, whenever that need may arise in the community. The effort requires many to roll up their sleeves to beautify the playing grounds. But first, they seek to spread awareness for their cause, and this time it came through during the first annual Courts of Dream Classic.

On this night, win or lose, everyone was a winner for buying into the vision set forth by 17-year-old Danny Cornstein, a junior at Horace Mann and a member of the school’s varsity basketball team. Cornstein was handed the microphone before the boys game and spoke about the significance of the occasion. As he had done so often for his family’s brainchild, Cornstein delivered once again.

“The amount of respect shown by the Fieldston team to support and wear the shirts and to participate in the game, as well as my classmates at Horace Mann, it was really special,” Cornstein said. “They truly understand the difference they help make in the community.”

Cornstein’s parents, Marc and Natasha, started the nonprofit in 2008 and always planned to hand off the day-to-day decision-making to their son some day. The time for that came in 2021, at a time when there was a clear need for better outdoor courts around the Bronx. Marc is a sports agent at Pinnacle Management Corp. and his love for the game was passed down to his son.

“Our family has been involved in basketball ever since I was born,” Danny Cornstein told The Riverdale Press last May at a Courts of Dreams’ youth clinic. “So, being able to combine the great sport of basketball and giving back is so meaningful for my family. The goal of Courts of Dreams is to restore basketball courts in underprivileged communities, especially during Covid-19 (where) they’re a safe haven for every kid.”

Cornstein’s natural response to enlist the help of some classmates at Horace Mann, all of whom have played their own role in advancing the momentum of the organization. On Friday night, they handed out shirts and collected money for raffle prizes while parents and friends lined the sidelines.

“I started off a regular member of the junior board and now I am the director of financing,” said Chase Forbes, an 11th-grader at Horace Mann. “Courts of Dreams allows me to interact with different people and it’s really a unique opportunity.”

First, they tackled renovations of two courts located at the Woodlawn Playground on the East side of Van Cortlandt Park. The project was completed over the summer, garnering a hero’s welcome from a host of community leaders and others in the community who supported them at a groundbreaking ceremony in June. Among those who showed up were Bronx Borough President Vanessa Gibson, Assemblyman  Jeffrey and city Councilman Eric Dinowitz, and New York Knicks officials ahead of the opening of the courts in September.

“You wouldn’t notice from before and then after,” said Cornstein. “I think the community is just really happy the court is playable and there aren’t any cracks in it.”

The Knicks are an active partner of Courts of Dreams, which is why they set up shop for their clinic in the Horace Mann gym last May. That day raised $150,000 alone to make the Woodlawn idea a reality. And according to Natasha Cornstein, the most valuable NBA franchise will be back to host it again this summer.

The Knicks aren’t the only NBA team helping out. During halftime of Friday’s games, the Courts of Dreams board announced the winners of the raffle prizes, which included signed basketballs from entire rosters of the Memphis Grizzlies and Miami Heat, as well as a signed ball by Philadelphia 76ers star Tyrese Maxey. The amount raised, counting online donations, totaled around five thousand dollars which will be earmarked for future projects.

“It’s great because basketball is something we all love and we get to give back to people who have the things we have,” said 10th-grader Tucker Harris, who recently joined the board.

“Danny made a really compelling case about how there are courts that are broken down and how we can fix them.”

There is no plan yet for their next project, other than that it will likely be in the Bronx because it’s where they attend school.

“What’s really special about Courts of Dreams is that it provides two really big passions for me, which are basketball and helping out the community,” Cornstein said. “I think it’s a perfect hybrid.”